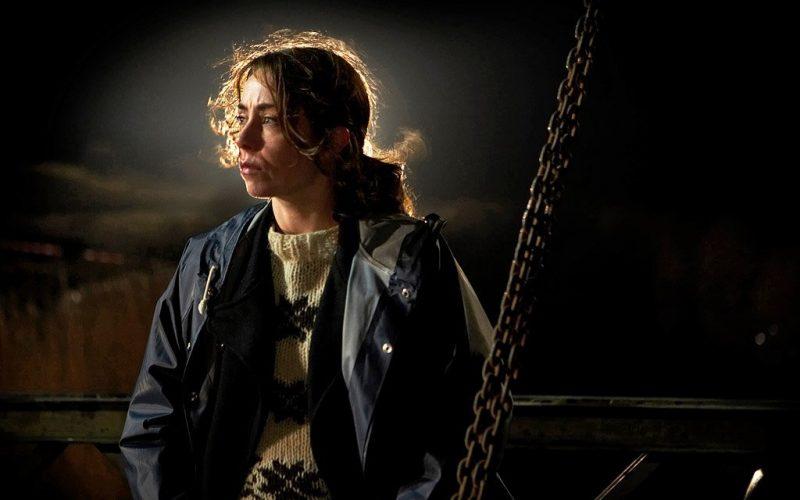 By Albina McLaughlin 6/1/18
With Season 4 of the Swedish-Danish crime thriller The Bridge underway, Friday evenings in our Ireland household are once again reserved for a beloved television viewing pastime.
I speak, of course, of knitwear spotting. And indeed, no sooner does the crumpled, chain-smoking cast spill out onto the mean streets of Malmö, than it begins. 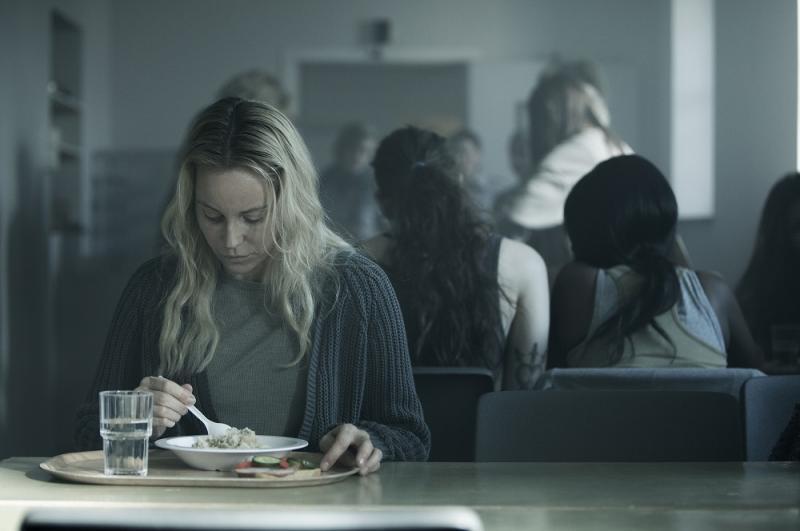 Detective Saga Norén in The Bridge.

When deadpan Detective Saga Norén (played by Sofia Helin) appears on screen, she is draped in an oversized cardi so badly fuzzed and stretched out of shape that it surely was knitted out of alpaca, from a brand I think I recognize.
In a subsequent scene, a playfully antagonistic detective arrives in a raglan pullover with all-over honeycomb cables. Excitedly, my husband recognizes the motif, as it is one I have used on several of his hats.
We are, at this point, but minutes into the show, you understand.
Spotting knitwear in a Scandi-Noir series is akin to shooting fish in a barrel. The traditional, quaint, and authentically worn-in sweater has become an obligatory element of the genre.

It began in 2007 with the Danish thriller Forbrydelsen (The Crime). In the series, the lead character Detective Sarah Lund (played by Sofie Gråbøl), wears a traditional stranded colorwork sweater by the Faroe Island designer Gudrun & Gudrun. 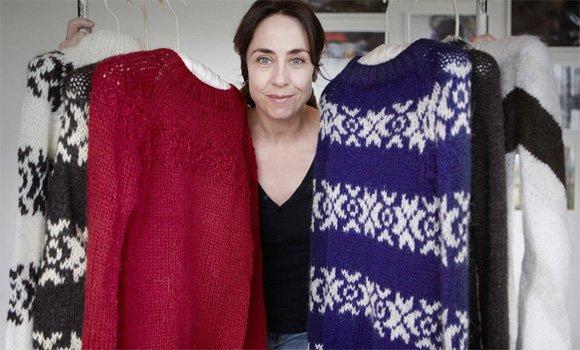 Actress Sofie Gråbøl with a few of her “Killing sweaters.”

More accurately, however, there are several sweaters. The original garment is badly slashed at the start of the series. It then re-appears later in the show, undamaged. In a different episode, another colorwork sweater seems to undergo a color reversal in the middle of a scene.
It was likely this sequence of bloopers that first attracted viewers’ attention to the series’ knitwear. As attention turned to fascination, the show’s producers obliged, and other sweaters were added to the lead detective’s wardrobe.
By the time the series aired globally in 2011 under the English title The Killing (a more direct translation would be “the crime”), these garments became cast members in their own right, known collectively as “The Killing Sweaters.” It wasn’t long before knitters’ interests were piqued. 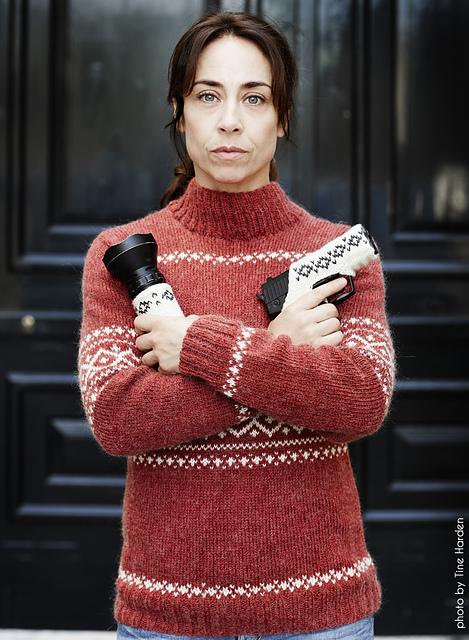 Strawberries and Crime, from Series 2 of Forbrydelsen.

Enter Strawberries and Crime, from The Killing Handbook by Emma Kennedy, and a series of “Killing Sweaters” by SKD Yarn.

As other Nordic thrillers followed and the Scandi-Noir genre began to take shape, the knitwear kept coming. If you enjoy your metaphysical crime dramas subtitled, watch Trapped, Jordscott, Blue Eyes, Thicker Than Water, and Fortitude, just to name a few. 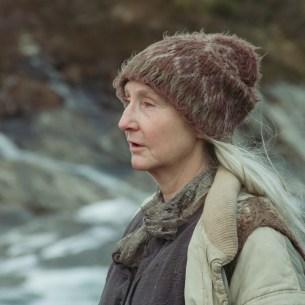 Whether the characters are hiding family secrets, bribing politicians, running from polar bears, or merging their DNA with swamplife, you can be certain that at least some of them are doing these things dressed in captivating handknits.
From a critical analysis perspective, the purpose of the knitwear is both obvious and profound. At its core, Scandi-Noir is about juxtaposing the familiar and comforting with the violent and evil.  A sweater makes for an easy symbol of the former. Together with the hyggelig interiors, color-coordinated streetscapes, and constant clutching of mugs containing hot beverages, knitwear forms the fabric, so to speak, of the cozy, reassuring backdrop against which terrible happenings attain maximum poignancy. It is a similar juxtaposition to that which defined David Lynch’s Twin Peaks, set in early ‘90s Washington State, except where Lynch was playful, exuberant, and blatantly tongue-in-cheek, the Nordic directors tend to be sparse, controlled, and terse. 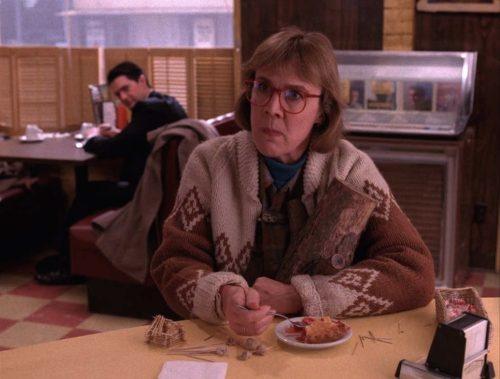 While folkloric knitwear reads as authentic in Scandinavian settings, it comes across as more heavy-handed in English-language equivalents of the genre (think Broadchurch, Marcella) and, particularly in certain American shows.
The most blatant example is the US remake of The Killing. 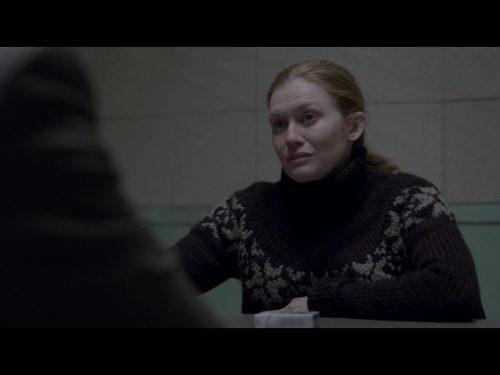 Detective Sarah Linden in The Killing.

Set in Seattle and starring the otherworldly Mireille Enos, this version of The Killing is excellent; some critics have even pronounced it a better show than the Danish original. But to my eye, something feels off about the American Sarah Linden’s inheritance of her Danish counterpart’s penchant for knitwear.
While the Danish Sarah’s wardrobe reads as normal in the context of her personality and culture, the American Sarah’s collection of thick folksy woolens, worn with her otherwise Gortex wardrobe, feels like it needs an explanation which the viewer never receives. Conspicuously rustic, the sweaters she wears are not the type one might buy in a chain store; they look distinctly hand-knitted. But Sarah has no family, and no friends who seem even remotely capable of producing such creations. Where does she get her sweaters? Is she a dedicated patron of the local Nordic-imports emporium? Or does she frequent charity shops in search of discarded Lopi? Given her hectic and unsentimental lifestyle, I cannot picture American Sarah at either establishment. The remaining possibility, however unlikely, is that she is a knitter herself. 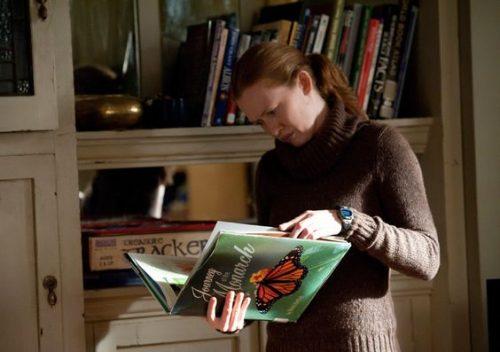 Clearly handknitted in the Ravelry Era. But which pattern?

I give this scenario a whirl in my mind’s eye and try to get behind the idea. Sarah Linden, on Ravelry. Location: Seattle. Favourite color: plum. Years knitting: 6. I imagine that she learned how to knit as part of the recovery process after the nervous breakdown alluded to in her backstory. First there were scarves. But with her tenacious investigative mind, it wasn’t long before  sweaters followed, their coziness the only form of embrace her damaged psyche can handle.
OK, my theory is farfetched. But I need something, for the American “Killing Sweaters” to make sense.

From Self-Parody to Parody

If there is a spectrum between stylistic device and kitsch, then arguably, the Scandi-Noir sweater has almost from its inception crossed over to the latter territory, as evidenced by the 2014 parody Inspector Norse, staged by the British theatre company Lip Service. 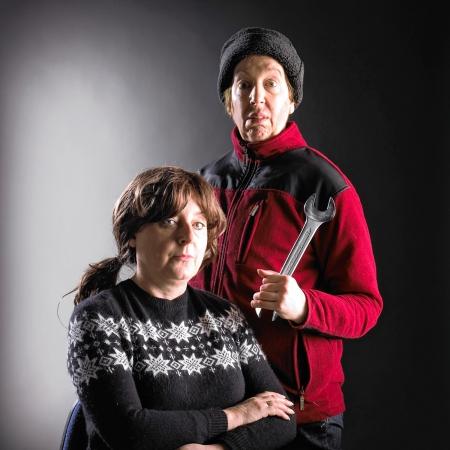 As directors Maggie Fox and Sue Ryding explain, handknits were ingredients as crucial to the genre, as the murders themselves.
Now over a decade on air, the Scandinavian thrillers have become a beloved, albeit somewhat tired genre. The once-fresh storylines and characters are starting to feel repetitive; the styling and aesthetics, formulaic. Unsurprisingly, some say that Scandi-Noir has jumped the proverbial shark. And that may very well be. But I, for one, am still willing to watch. As long as that shark keeps wearing a stranded colorwork jumper.

The Killing (U.S. version) is streaming on Netflix.

See also: Making The Killing (don’t miss the mention of Sarah’s sweater at the end). 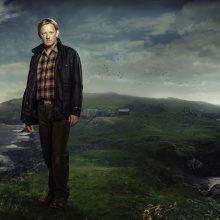 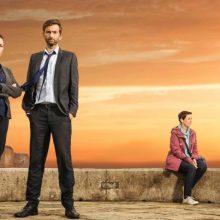