Everybody’s got their own definition/rationalization of frugality. With regard to television, I’ve evolved to being profligate with my subscriptions (Hulu and Amazon and Netflix), while dialing the cable TV package back to the bare minimum needed to bring a faint signal into my home. And I rarely, practically never, just up and rent a movie or series on pay-per-view. That’s too much! Hold on a gosh darn minute, and wait for Netflix!

The exceptions are exceptional. For season 3 of Broadchurch, which just came out on iTunes and Amazon Prime, I make an exception.

Seasons 1 and 2 of Broadchurch had me about to jump out of my seat. It was torturously suspenseful, with great characters, sets and acting. I can’t be waiting on Netflix or PBS for Season 3 (it’s—sob!—the final season), but don’t worry: if you’re waiting, I won’t spoil it.

P.S. Don’t click this link if you haven’t seen the first two series of Broadchurch, but here’s a short video about the making of Broadchurch, full of spoilers and incredible landscapes.

P.P.S. Big news for actor Jodie Whittaker, who has a prime role in Broadchurch: she’s the thirteenth doctor! Doctor who? Doctor Who! I don’t know either, but it had my Twitter very excited a few weeks ago.

From a Test Knitter’s Journal
13 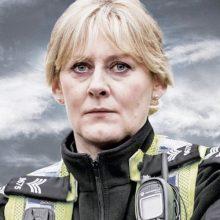