77 Comments
Home » The Truly Random » Me & Seth: A Tale of Love, Hate, Corrections, and a Sweater Vest

Me & Seth: A Tale of Love, Hate, Corrections, and a Sweater Vest

You all know how much I hate knitting tropes like “Not your grandmother’s knitting” and “knitting is the new yoga.” And like everyone, it also drives me nuts how knitting and crochet are constantly mixed up. I wrote about that back in January 2020. Well, recently I had a chance to go to battle defending the good name of knitting.

It all began one summer evening in August of 2021. Actually, it started long before that. Let me begin at the beginning.

I have not watched late night TV regularly since the  Letterman days. Back then I was a stage manager and I would get home from work around 11:30 pm. Since changing my life and my working hours, I haven’t really kept up with late night shows. However, through YouTube, I had become a huge fan of Amber Ruffin. I first discovered her in a segment on Late Night with Seth Myers called “Jokes Seth Can’t Tell.” To me, Seth was just the guy that Amber Ruffin worked with.

All that changed during lockdown in March 2020. That’s when all the guys in suits sitting behind desks started to create shows from their own homes with bad lighting, terrible sound, no makeup, no staff, and I loved it. There was something so intimate and adorable about it all. My favorite was Seth Meyers, who I took to calling “the little man in the attic” (he filmed his early pandemic shows from his attic).

Fast forward to March 2021: I became obsessed with an internet-only segment of Late Night with Seth Meyers called “Corrections” that was born out of his viewers tweeting or messaging him corrections. Over the months that followed, the corrections would pour in via comments on the YouTube channel. Seth affectionately dubbed us (the correctors) Jackals. This began a delightful dance of poking us with mistakes, so we’d bite. These mistakes were not made “on accident” (fellow Jackals will pick up on that one). They were meant to keep the joke going.

That’s where the knitting fun began. Allow me to present, a knitting drama in 7 acts. (Complete clips are below, but if you’d like to watch only the knitting parts, they’re here.)

After Seth made a series of mistakes in a segment about knitting, a knitter named Laura Brooks sent a very detailed correction. What really got his attention was the colorful language she used.

He was surprised and commented that it did not fit his stereotype of knitters.

So I posted a one-minute clip on my Instagram with the simple message: “Seth Meyers has clearly never met a f*&^ing knitter.”

Then he had to go escalate it by outing me for clipping him and chiding, “Corrections is mean to be seen as a whole.” At the end of the segment, he decided to poke the Jackals again by holding up his note card to reveal on the back “Knit One, Pearl Two, Relax Three.”

“Okay,” I thought, “you wanna play?” Well, of course, I clipped him again and posted it on Instagram.

Of COURSE, we took the “pearl” bait, I mean, we are Jackals, that’s our job. This caused Seth to call us the “foul-mouthed (semi true), short-tempered (yes, when you mix up knitting and crochet), incredibly diverse (true) knitting community.”

I was 2 days away from leaving for my knitting retreat Affiknity, but I had an idea …

While googling “Seth Meyers and Knitting,” I came across an abomination of a photo shoot he did in 2017 for GQ. It showed Seth holding a crocheted blanket with knitting needles stuck straight down into it.

Well, I wasn’t gonna let that one go by without a poke, so I posted this little story on my Instagram.

48 hours later … called out again! You can run, but you can’t hide from your past, mix up knitting and crochet at your peril!

Before I left for Affiknity, I worked on a little idea for something for Seth in honor of his Emmy nomination for Corrections. However, I knew I didn’t have a minute to knit it—we had about 5 days to turn it around in time. So I sent the yarn and the Emmy image along with the front image (the title card from my favorite misspelled Corrections—Correctshuns) to my pal Brooke Nico since I knew she could knock it out in time. She did an amazing job!

I recorded a special message in advance of shipping off our gift.

The lettering on the front is a combination of stranded knitting and intarsia: 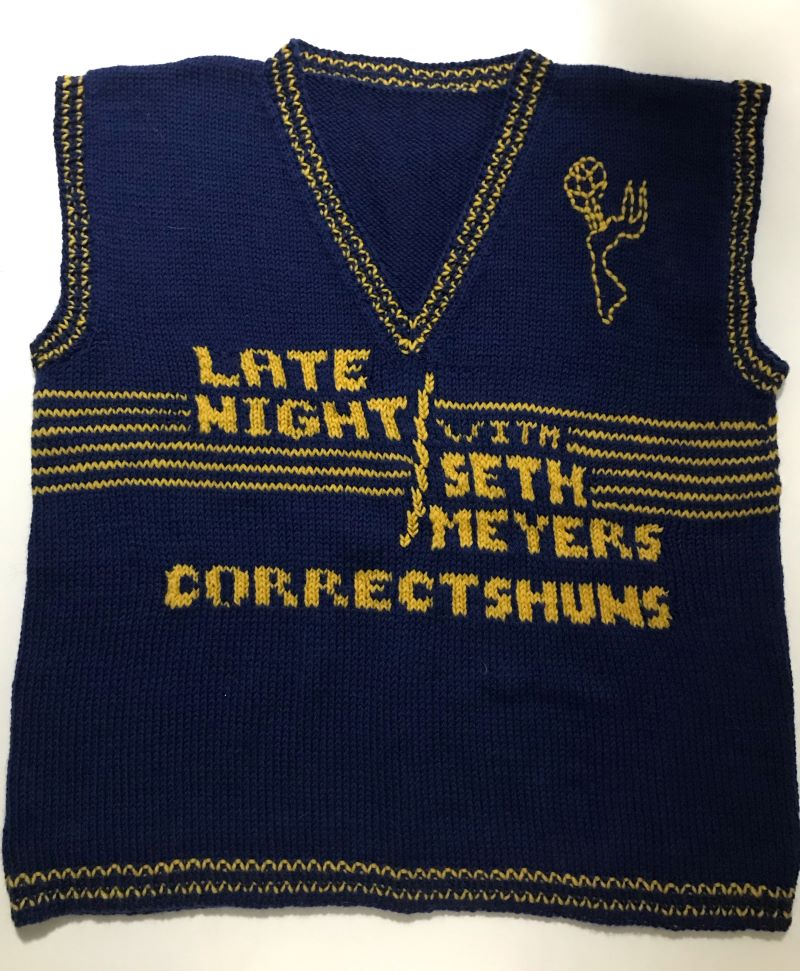 The Emmy in embroidery. 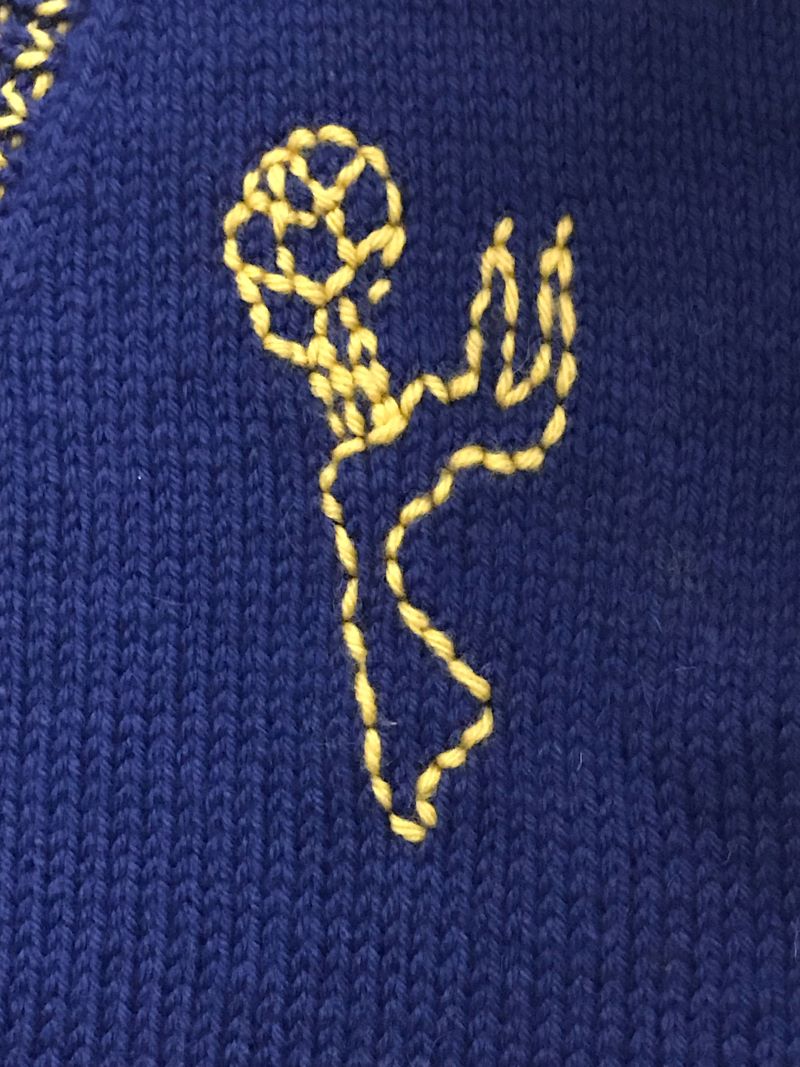 And for the (afterthought) secret message on the back: duplicate stitch. 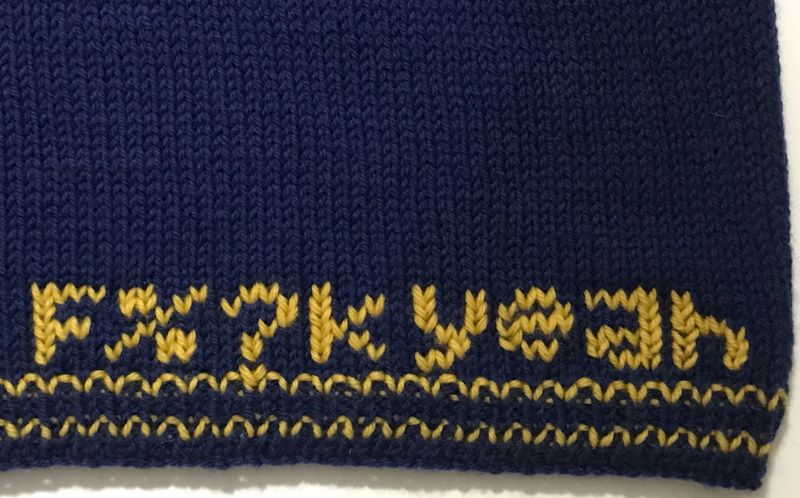 We googled his chest size, which was clearly a lie, but the fact that it’s a bit big on him puts a cherry on the top of the joke.

I guess he likes it.

By the way, Seth, we didn’t miss what was on the back of your card.

This story is not over until you learn how to knit. 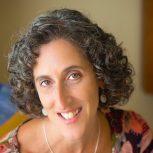 How To
Big Day: The Skill Set App Is Here! 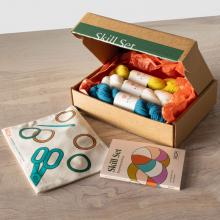 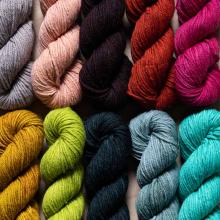