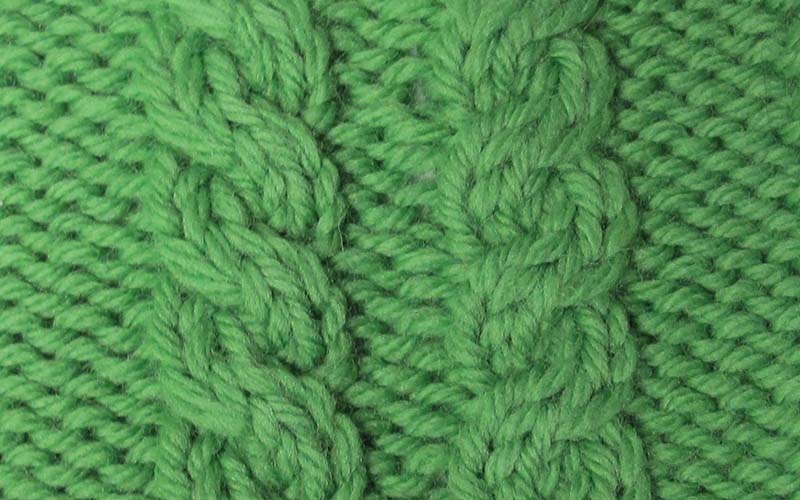 31 Comments
Home » How To » Cables: Improving and Troubleshooting

As a knitting teacher, I’ve noticed an interesting thing about cables: there’s a two-phase learning curve.

Newer knitters are often intimidated by them. After all, they look wonderfully complicated, and the instructions can be a little off-putting. There are all these new terms, and a cable pattern is often a knitter’s first foray into charts.

But once you try them, you realize that they’re entirely straightforward. As long as you can find the glossary for those pesky terms and symbols, you’re golden. Slip 2 stitches to a cable needle? Easy! Knit 2. I can do that! And then knit 2 from cable needle. Done. No problem!

And with that, you forge ahead, fully confident.

But after a while, the cable knitter’s confidence can drop. There are subtle challenges in working cables: counting rows, making sure you’re twisting and crossing the right way, and keeping them tidy.

How to Count Rows

There are always even rows/rounds between cable turns—sometimes one, sometimes more. If you’re not a careful counter, it’s pretty easy to lose track of where you are or how many rows you’ve worked.

Here’s how you check.

Stick the cable needle under the cable twist, like so: 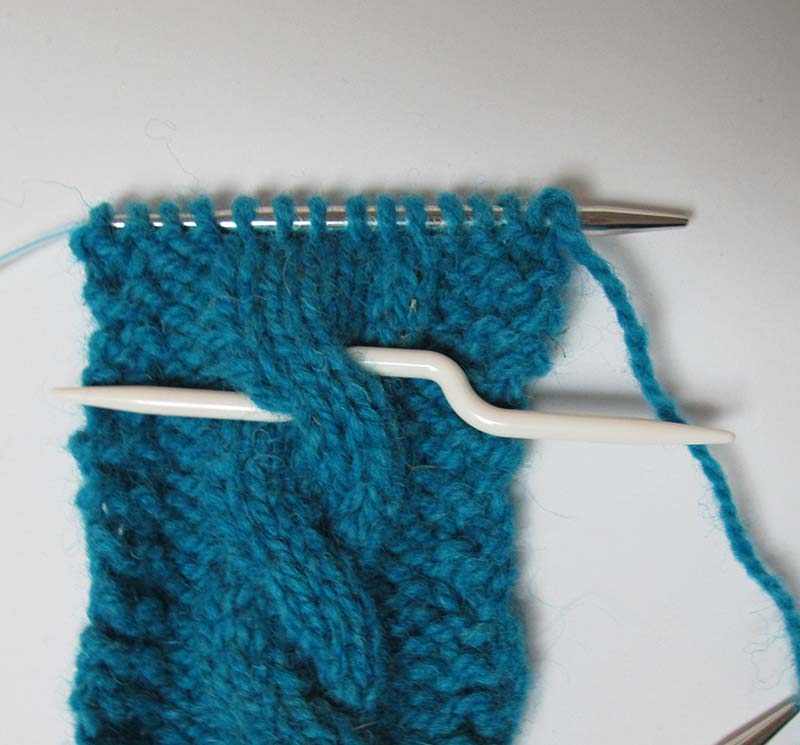 Stretch the work out a little, and count the horizontal bars that run between the stitches of the cable and the purl column beside it. Count the bars sitting above the cable needle. 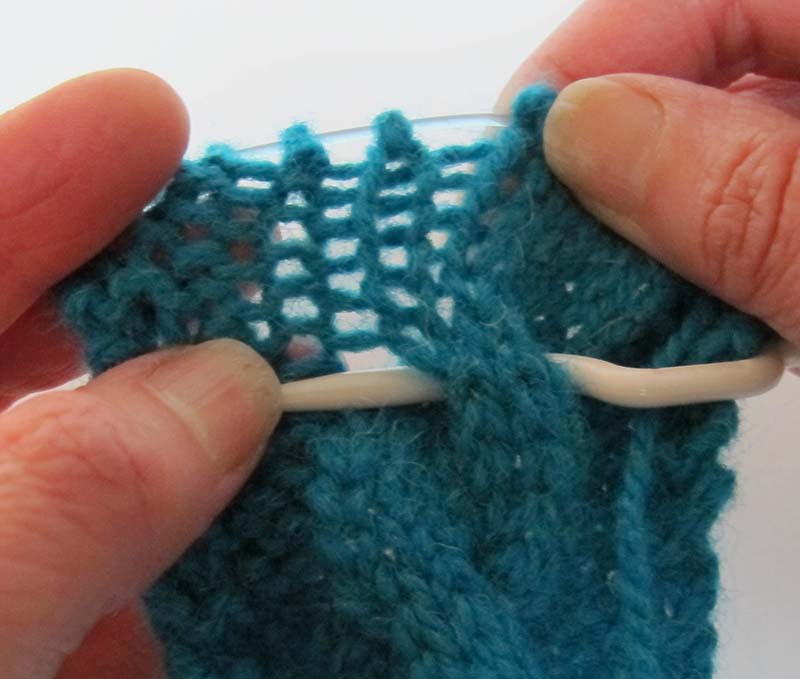 I can see six here—one for the actual turn, and then 5 even rows above it. Time for another cable!

Time for Norah Gaughan cables! Thanks for your Shop purchases. They keep everything going here at MDK. 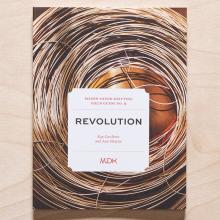 Some instructions use the L and R formulation, e.g. C4L and C4R. It’s reasonably safe, if you see this type of cable name, to assume that if there’s an L, the cable is going to swing to the left. 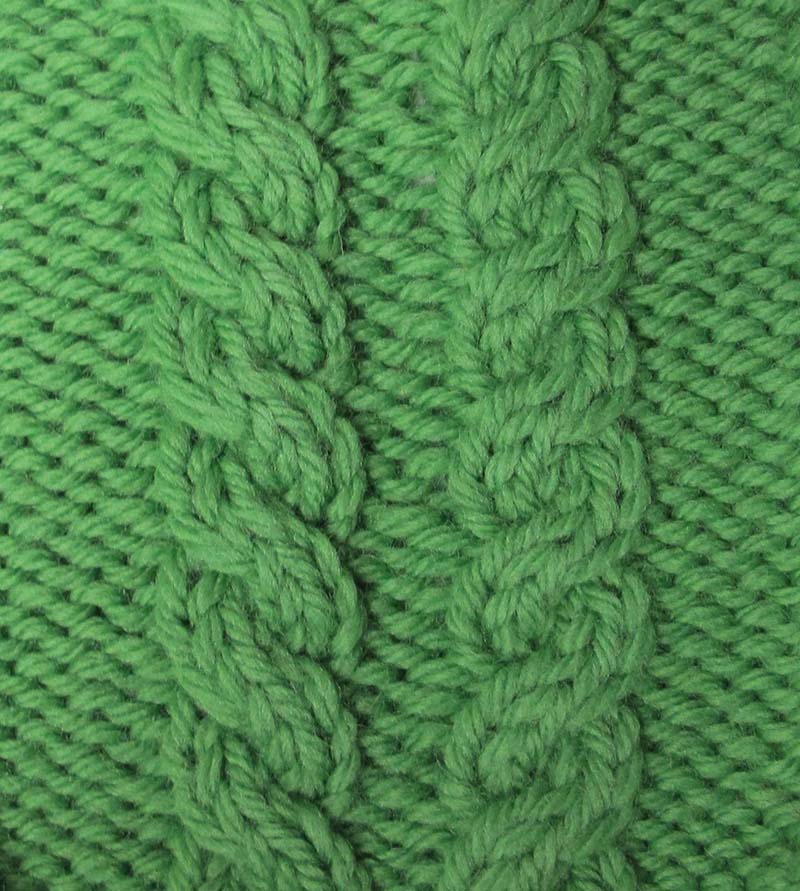 And if there’s an R the cable is going to swing to the R.

I like this style, since it allows me to check that what I’m doing is correct.

Other instructions use F and B—for front and back. In this case, you’re being told not which way the cable turns, but where to hold the cable needle. It’s helpful in one way—a nice reminder how to work the cable—but doesn’t help you check that you’ve done it right.

A Side Note About the Numbers

Some standards put one number in the cable name, as in C4R above. That’s generally the total number of stitches in the cable. Some split it up, e.g. C2/2R. That generally is used to communicate the number of stitches in the two halves—that is, one of the numbers corresponds to the stitches slipped to the cable needle; the other corresponds to the stitches worked off the left needle. And I’ve seen some patterns use just a name, e.g., FC (for front cross). (Barbara Walker, I’m looking at you.)

The takeaway: Never assume what a cable abbreviation stands for. Always look up the stitch definition in your pattern’s glossary. Don’t try to guess. That way lies mistakes, and sadness.

It’s pretty easy to get your yarn all tangled up when moving the stitches around and managing the cable needle.

If the yarn gets inadvertently wrapped around the working needle or the cable needle, you’re essentially making a yarnover – which can result in an extra stitch mysteriously appearing, or just a very loose strand of yarn.

This is simple to prevent: Before you slip the stitches to the cable needle, make sure the yarn is in the appropriate position for the next stitch. For example, if you’ve just worked a purl, and the cable is all knits, move the yarn to the back before you move the stitches. 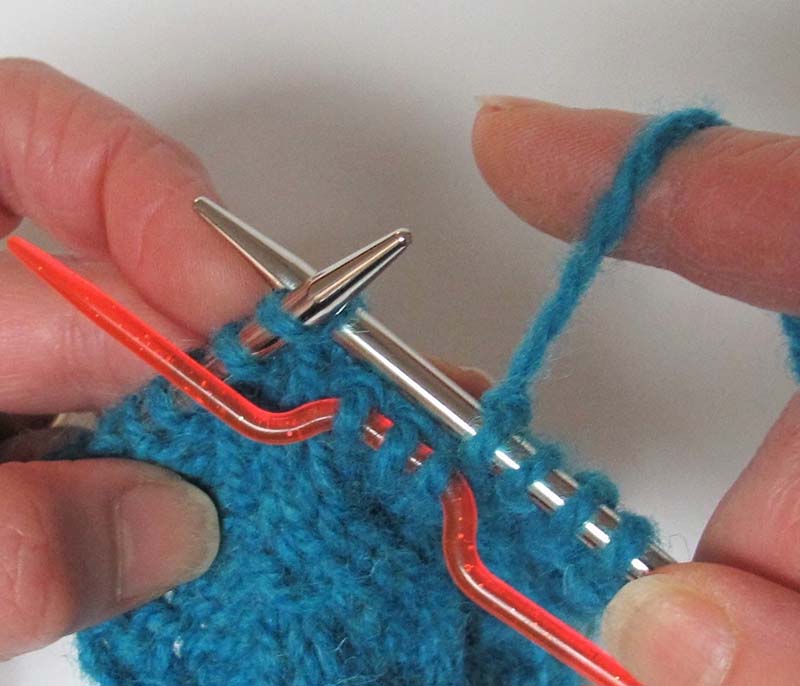 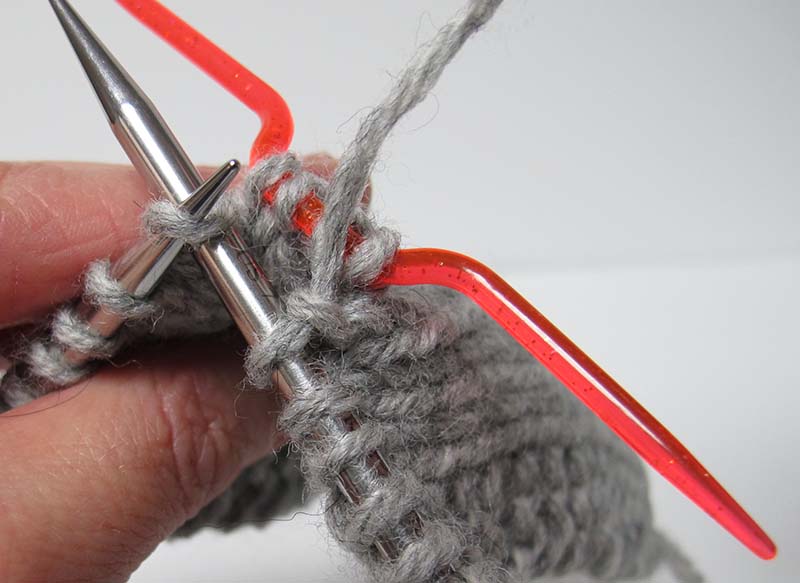 Even when you’re careful about yarn position, you might have noticed that the stitches at the edges of your cable are a little baggy, a little loose. This isn’t uncommon, and it’s not really surprising—after all, stitches are being stretched out and moved around. 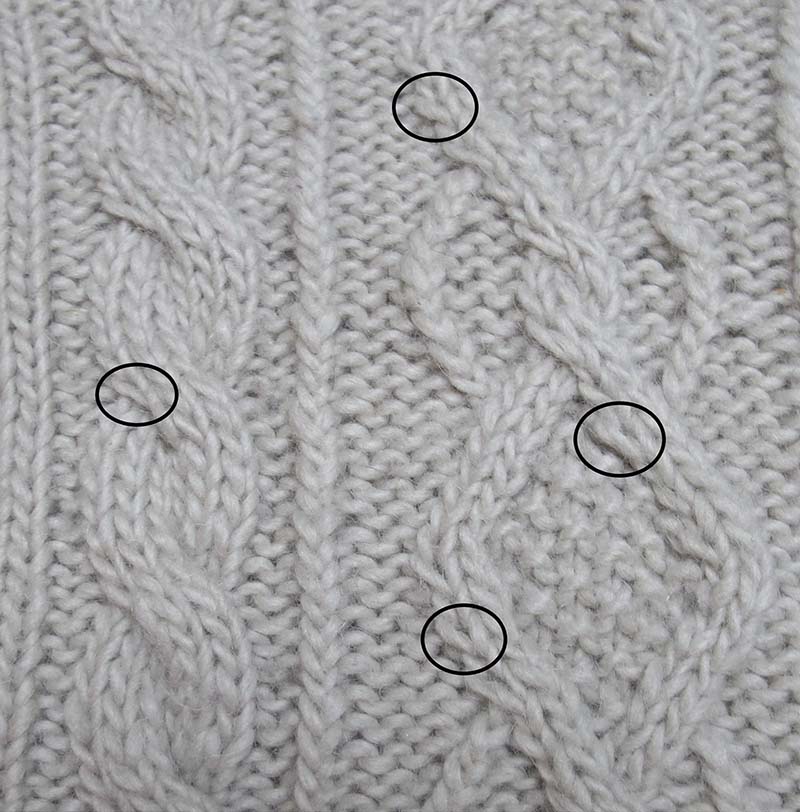 It may or may not be really terrible or noticeable in your work—it depends a fair bit on your natural knitting tension, the characteristics of the yarn, and the frequency of the cable turns. Wait until after you’ve washed (blocked) the piece, and then see how it looks. (Oooh yes, *yet another* argument for swatching and washing your swatches.) If it doesn’t bother you, then there’s nothing you need to do.

If you look closely at a commercially made cable-knit garment, you’ll likely see this same effect. It’s not a mistake, it’s just a side effect of the cable turn. 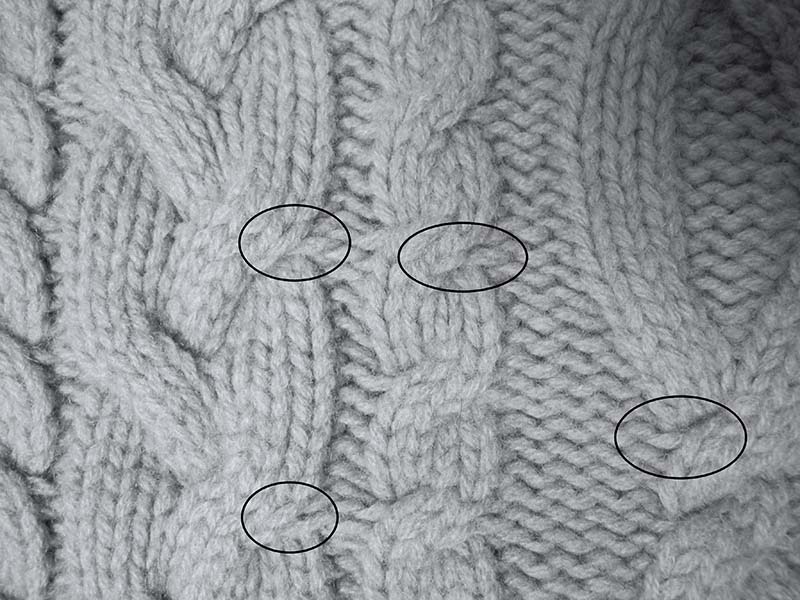 As with the handknit sweater above, I’ve circled a few cables, and you can see a little distortion wherever there’s a cable turn. You can also see that the strand that runs between the purl column and the knit stitch at the edge of the cable is longer.

If you do find that this unevenness is noticeable, and it bothers you even after washing, then there’s an easy way to tidy it up.

If truth be told, the problem isn’t entirely the fault of the cable turn, it’s also partially caused by the stitches around it.

If you read my column about yarnovers, you’ll remember that there’s a problem when you’re transitioning between a knit and a purl stitch: when you move the yarn from the back of the needle to the front, you’re adding a bit of extra yarn between the stitches. That yarn gets taken up into the knit stitch, making it larger than a standard knit stitch.

To compensate, work the following purl stitch the short way—wrapping under rather than over. The yarn doesn’t travel as far when you do this, making the purl stitch too small. When you block, the purl will borrow yarn from the neighboring knit stitch, averaging them out to the proper size. 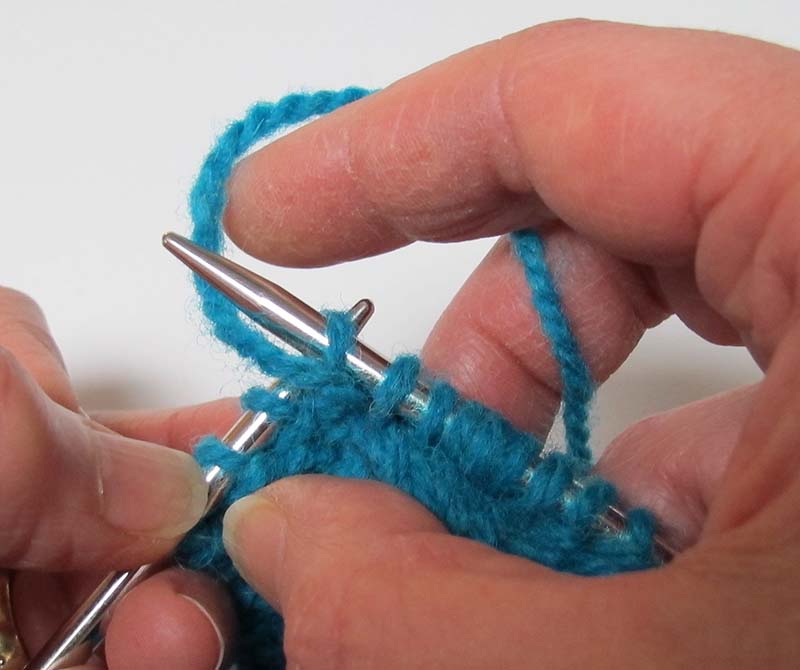 Wrapping yarn the short way—under the needle instead of over it— makes for a snugger purl stitch.

Just remember that when you’re working over that stitch on the next row/round, it will be seated incorrectly on the needle—left leg forward–so you’ll need to work it through the back loop to untwist it. 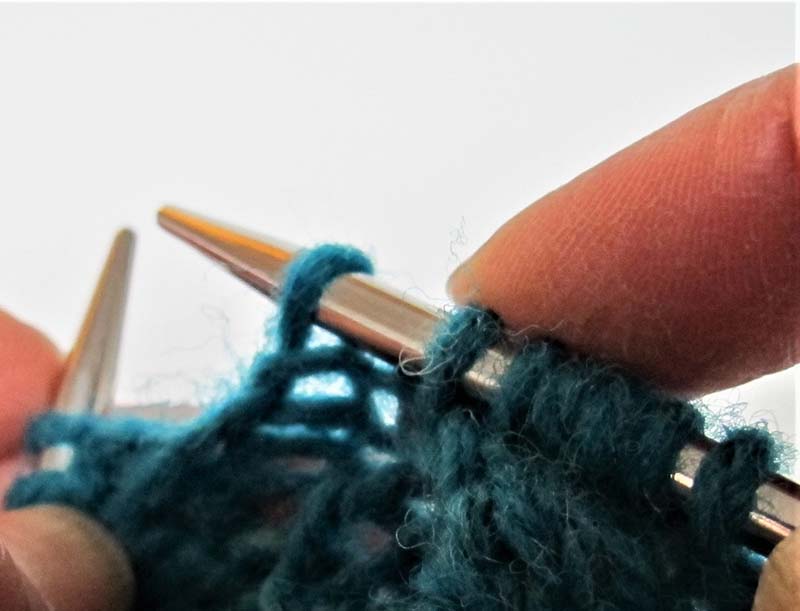 Untwist that puppy, er, purl Stitch, on the next row.

You might have noticed a similar effect in ribbing. The edge stitch of a larger rib can look a little sloppy, for the same reason. And the same fix works!

Next column, I’m going to talk about how to ditch the cable needle entirely. (Editor’s note: WHAT?)

How To
Techniques in Depth: The Humble Yarnover
26

How To
Techniques in Depth: How to Count
25 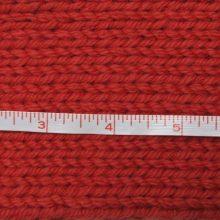 How To
Techniques in Depth: How to Measure
23

How To
Techniques in Depth: Joining in the Round
50