Knitting brings calm, generally. Most of the time, I sit down, start knitting, and feel the zen kick in.

Michèle Rose Orne’s Asterisk Cowl has reminded me, though, that sometimes you have to bring the calm to the knitting. When I cast on Asterisk yesterday, it had been a while since I’d done any two-handed colorwork. (Can it really have been as long ago as last year’s Bang Out a Sweater? I think so!)

You can’t be a jangled, distracted mess at the start of a Fair Isle project. You can’t stop in the middle of a row to answer an email, or drag the project around the house and keep having to set everything up again—it just makes you mad at the project before you even properly start it. The two strands of yarn start tangling and getting wound around the circular needle, for an effect that is the opposite of soothing. You have to be in the mood to focus, at least at the set-up stage. 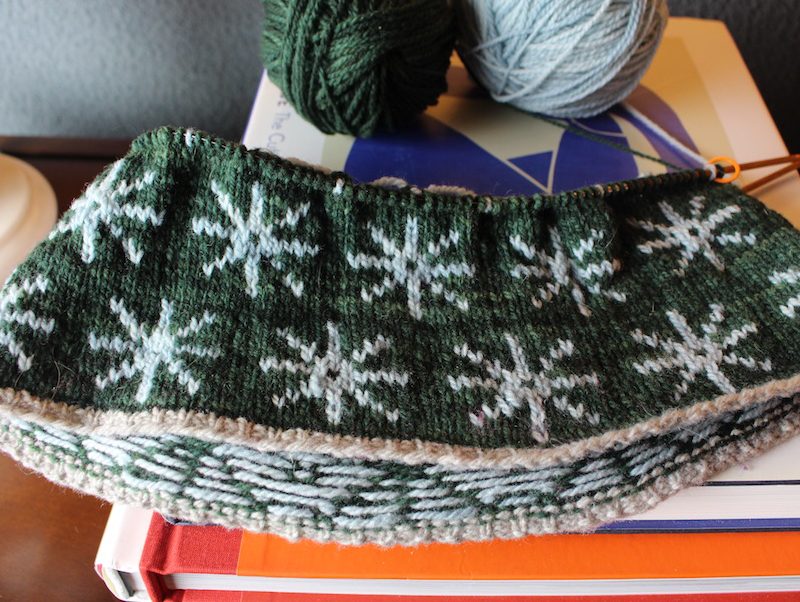 But once I got in the groove on this simple asterisk motif—by the second row of the chart, really—it was smooth sailing. I remembered why simple, two-color Fair Isle is so satisfying: there is a rhythm, repetition, and symmetry. Things make sense. This pattern is centered on the line of knit stitches down the center of the asterisks; everything arranges itself nicely in relation to that pole. Very quickly, you know where you are, and you can let go of the chart. Ahhhhh. (Does anybody else feel like this kind of Fair Isle has the same effect on the brain as playing a phone game like 2048? You get in the zone, and time stands still. But with 2048 you do not get a cowl at the end of the game.)

Note: the single stitch in the center of the asterisk shape is supposed to be in the third color. The pattern gives the option to put those stitches in later via duplicate stitch, which is very sensible. I’m going to copy Nell Ziroli‘s idea, though, and put French knots in that spot instead. It adds an interesting bit of texture, and if Nell did it, I think it’s worth doing.

I’m loving this Swans Island All American yarn. It’s 100% American Rambouillet! (What’s a Rambouillet? It’s a French breed descended directly from  a flock of merino sheep that the King of Spain sent to Louis XVI in 1786. Rambouillet have “a body size and conformation seldom seen outside the mutton breeds”—they look like the sheep in old landscape paintings.)  The yarn is light and springy; from a few feet away, the colors are lovely, but up close they are exquisite. I’m knitting it on 3s.

It’s going fast. Not at Wendy Johnson speed, but quite quickly considering I don’t do Fair Isle very often. I’m following instructions and keeping the pattern color in my left hand and the background in my right, and I’m catching the long floats on the back of the work as shown in this video.

(Confession: I steamed it a little because it was too curly to photograph. That’s show business!)

While I’m knitting the cowl, I’m thinking about whether I will do the hat using the Asterisk chart—matchy!—or the Dot chart. (I’m also wondering whether I have a body size and conformation seldom seen outside the mutton breeds.) 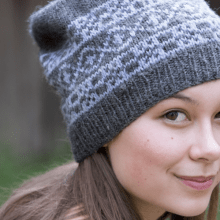 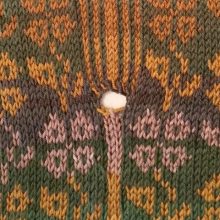 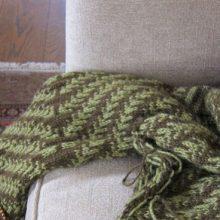