In my family we never went around the Thanksgiving table, each telling something they were thankful for. I attribute this to the dour Danish forebears. Gratitude was one of a whole list of emotions that were felt but rarely expressed. (It was OK to express a complaint, like the Helsinki Complaints Choir; Finland and Denmark are not that far apart.) I remember my childhood pastor, who revered the early Christians, reacting with abhorrence to the fish-sign bumper stickers that people were putting on their cars in the early 70s. He didn’t think one’s deepest beliefs belonged on the bumper of the family Oldsmobile. I don’t know why that memory sticks, but the idea that a feeling can be cheapened if spoken of too casually has resonated down the years.

Without saying it directly, or often, I constantly feel grateful. The first cup of coffee in the morning: grateful. That my husband was a mensch: grateful every day. That my kids are compassionate and honest: shaky with gratitude. That my dog wears sweaters: more than I ever asked for, and I’m thankful.

I’m constantly grateful for knitting. The act of knitting, making me be still, letting my mind chew things over in its own time. The Ziploc bags of knitting in progress, never empty. The irritations of knitting, blessedly solvable. The yarn! The sheep! All the people we’ve met because of knitting, including my sewing circle, in which someone occasionally goes rogue and picks up knitting. Sewing circle is a more or less bimonthly source of cackles and stories and reports from lives that are parallel to mine but going off on other tangents, to other mini-worlds. A pot of fresh mint tea and a bowl of almonds. Someone settling into an evergreen pattern that I’d nearly forgotten until it occurred to me as an easier re-entry into knitting than the pattern she’d started with (one that involved bitty sleeves worked in the round). 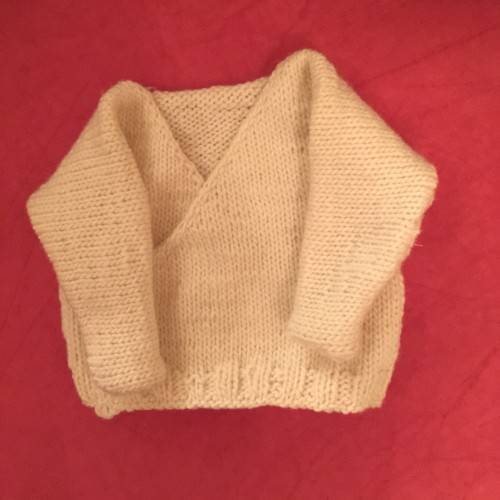 Look– a one-piece baby kimono from our first book! In cashmere! An ounce of cashmere–if that much. 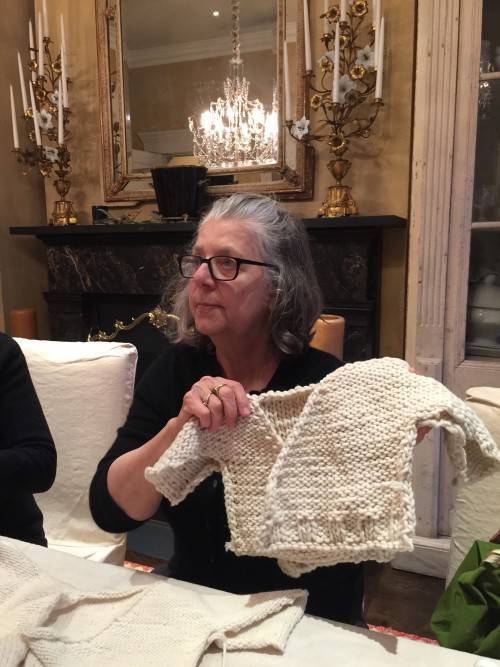 Maira made three of them, including this one in a super bulky yarn that will make a baby look like a bear cub. With freelanced ribbing at the hem. Way to make it your own. Mess with everything until it’s how you like it. See how it turns out. Then make another one.

Off to the scullery now, to be grateful for onions and celery to chop for tomorrow. Happy Thanksgiving! 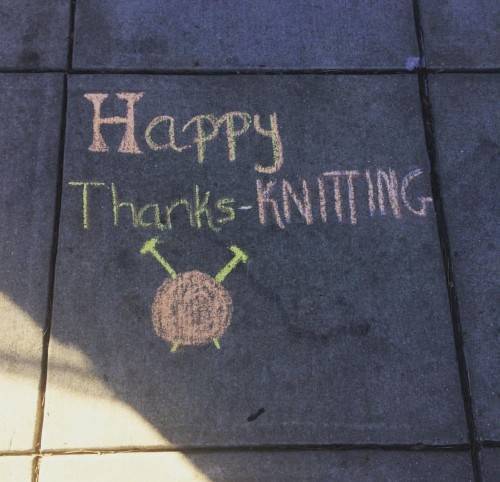 (Image nicked from the Instagram of one of our favorite knitting stores on the planet, Finely a Knitting Party, in Swarthmore, Pennsylvania. What a time we had there.)