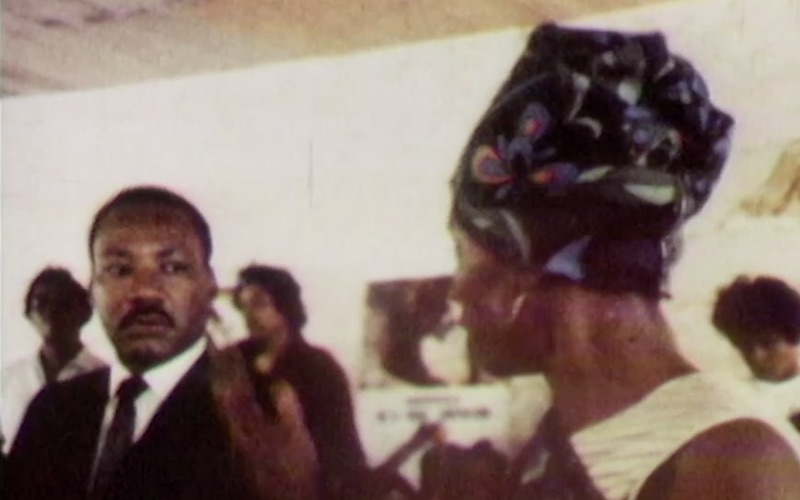 We’ve seen Martin Luther King’s speeches, his marches, his public-facing side. But in an astonishing documentary filmed in the months before his assassination, we see him doing the granular work of social justice.

January 1968. Martin Luther King, Jr. is planning a new movement, the Poor People’s Campaign, with the aim of gaining economic justice for poor people in the United States.

He is on the move, from his home in Atlanta, to Philadelphia, Mississippi; Selma; Birmingham, connecting with organizers who will help make the campaign a reality. A march on Washington is in the works, and King is aiming to bring half a million people.

There’s all sorts of debate and dissent, people throwing a lot of ideas at him, and he takes it all in, steadily listening. He rejects suggestions for any strategy except nonviolence. There’s a fire in him, but also an unearthly calm as he talks about his own mortality, which came mere weeks later, while this documentary was still being filmed.

There’s one scene, late in the film, at 1:12, that I won’t spoil by describing. But it is one of the most beautiful, haunting things I have ever seen.

On this day commemorating Dr. King, this documentary is extraordinary to watch, 53 years later. His mission is clear, and he is determined to push ahead despite the monumental forces aligned against him. He wants to be everywhere, so he’s always running behind schedule. Somebody’s talking to him, always.

We remember Martin Luther King, Jr. for the monumental change he brought forth. This film shows how he worked. Change came in tiny increments, decisions emerging from long debates. It came in the small moment when he listens to a mother in the Mississippi Delta talk about having no food, no clothes, no work.

That’s what I take from this film. Every one of us has the capacity to change one small thing.