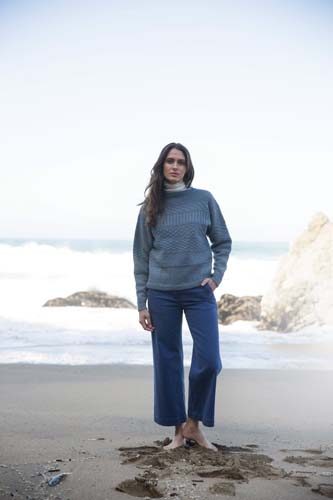 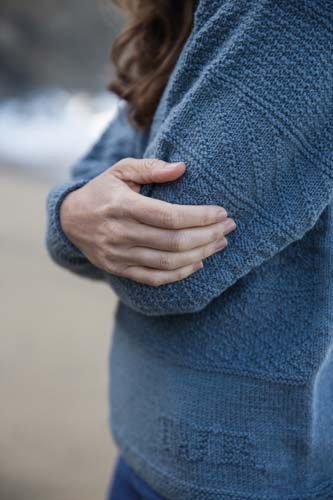 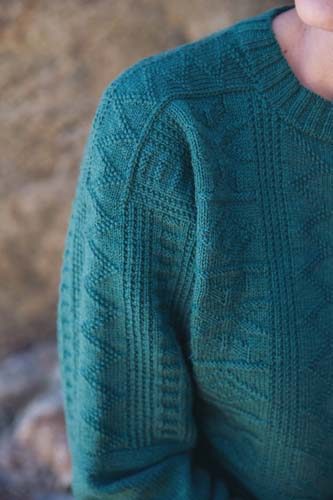 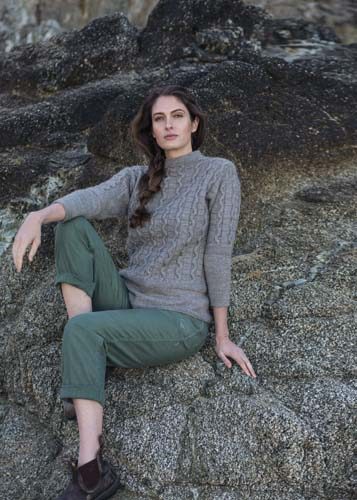 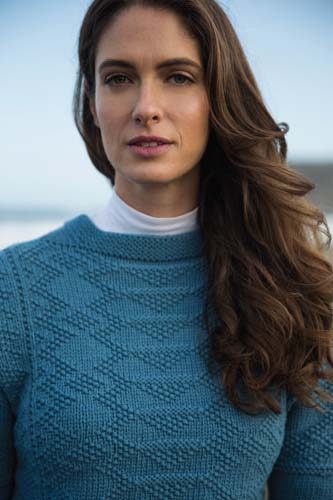 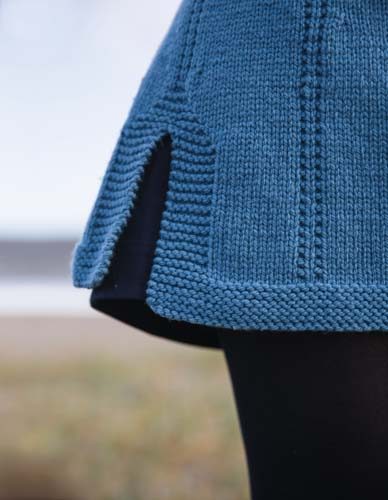 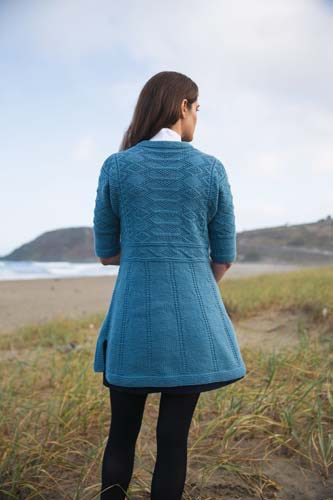 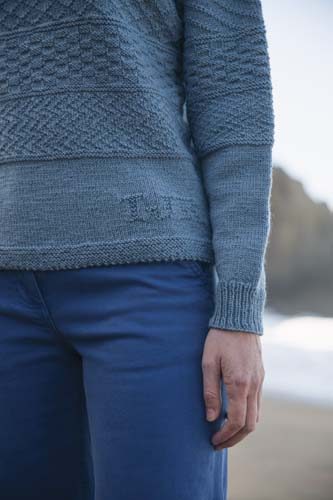 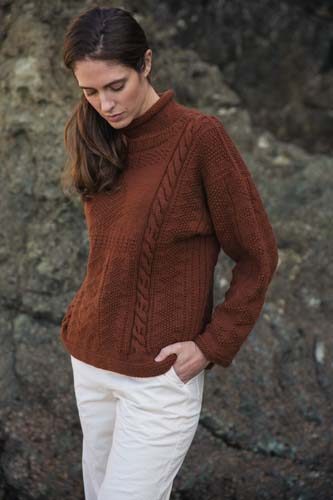 I arrived in her classroom at Stitches Midwest with my copy in hand, and asked if she would autograph it. She said yes, of course.

“What name shall I write?” she asked.

“Valued eBay Customer,” I said. (Query to self: Why? Why did you say that?)

Oddly, she did not throw me out of the class; and we remain on a cordial footing to this day.

As fiber arts publishing continues to search for a way forward in a changing market, some houses are reintroducing classics (Elizabeth Zimmermann’s Knitting Workshop, Tudor Roses, The Vogue Knitting Book, et al.) in fresh formats, and Knitting Ganseys is one of the latest.

I have my original (autographed!) copy and the new edition side-by-side here on my desk.

Guess which one is the new edition. Go ahead, guess.

Before you even open the book, you’ve got a hard cover, a larger format, and more subtle photography. 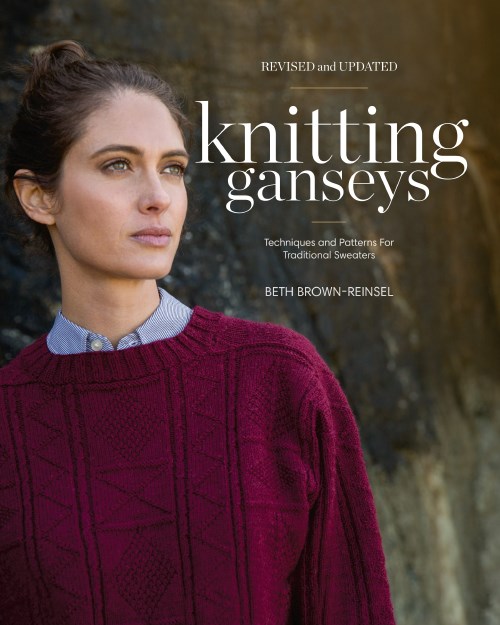 And the cover doesn’t lie. What’s inside is equally transformed.

One of the strengths of the original Knitting Ganseys was its basis in Brown-Reinsel’s real-world teaching. When preparing an educational book, no amount of theory compares to the first-hand experience of students in a classroom: what questions they ask, where they often falter or fail, what information is vital, and what information may be set aside.

Since the first edition, Brown-Reinsel has continued to present her curriculum to what must, at this point, be thousands of knitters. This cannot help but improve the material, and those improvements are evident everywhere. 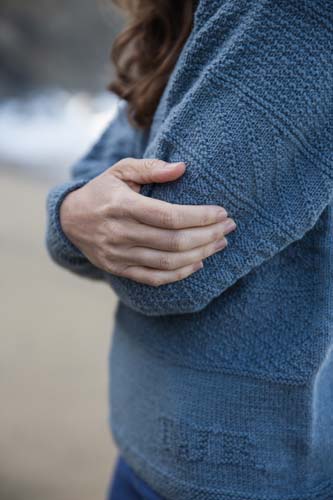 The historical preamble covering the known history of the gansey (or guernsey, or jersey, or knit-frock) is notably expanded. New descriptions and photographs of the traditional tools (knitting wires, belts, and sticks) show the relationship of the tools to the method, and the method to the garment. The history itself has been corrected and updated to reflect research and discoveries since the early 1990s, and the new format includes more and better (not to mention better printed) photographs of long-ago gansey knitters and their work.

The Heart of the Book

Then comes the heart of the book, in which the process of designing and knitting a traditional example are laid out in (thank you, Beth) the logical order in which a knitter considers and executes them.

Here, the author has her work cut out for her. Too often, accounts of “traditional” or “folk” knitting reduce a signature garment to a mere formula, giving the false impression that knitters in a living tradition take what is handed to them and reproduce it, without variation or question, for generations.

This is sometimes due to the author’s lack of knowledge, an editor’s heavy hand, or simply the number of pages available. But it’s unfortunate, wherever it happens, because it distorts the important truth that our knitting ancestors were, as we are, human beings working with simple tools to make beautiful and useful things. They had different needs, tastes, and skill levels. They thought about their knitting, they innovated, they picked up and discarded methods as it suited them.

One of the triumphs of Knitting Ganseys is that Brown-Reinsel faces the sheer variety of what you can knit and still call a “traditional gansey” without flinching, and without turning her book into a bewildering, overgrown hedge maze of options. 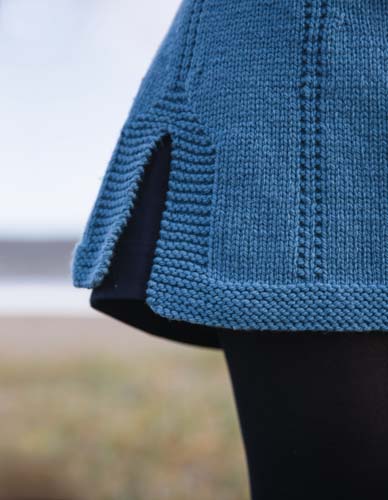 There are different (and historically accurate) approaches to the hem, the neckline, and everything in between. With the confidence of a woman who knows what she is talking about because she has been talking about it for decades, the author lays out the options for each step. Do this, and you get this. Do that, and you get that. No fuss, and not one scrap of unnecessary information. Choose your own adventure, keep calm, and know that they all end in a pretty cool piece of knitting.

Running through the book are the stage-by-stage instructions for testing the waters by knitting a small (very small, mine fits a svelte guinea pig) version of a gansey that includes patterning, underarm gussets, shoulder straps, and a neckline. These are based on her classroom curriculum, and they work.

In fact, they work so well that I’ve recommended this book to new knitters who just want to get a feel for knitting a sweater, any sweater, before they cast on a full-size project.

Even if you never actually knit a complete gansey, a few hours spent working through the miniature can change the way you knit. I found myself so taken with the tiny versions of the underarm gussets, and how much they improve the flexibility of a piece of activewear, that I’ve used them in at least ten non-gansey sweaters–particularly those intended for the toddler-to-teenager cohort. 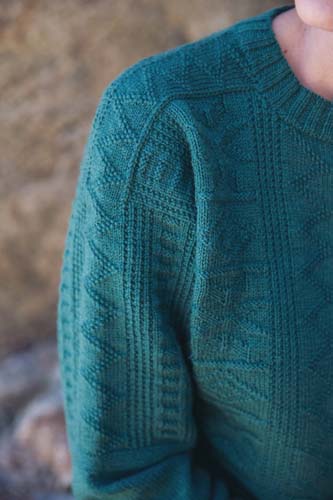 So far as I can tell, every page of the original edition has been reconsidered. That includes the line-up of patterns, expanded from six patterns to nine. Only the two greatest hits of the original (“Musician,” adapted from “Muted Musician,” and “Grace’s Cardigan”) are present. The other seven are new and beautiful, often playing with the traditional shape, fit, and silhouette in clever ways. 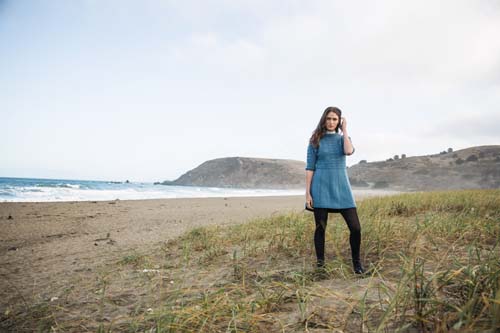 I mentioned the photograph on the cover, and it’s worth noting that not only the cover but the entire book has been handsomely re-photographed by David Baum and George Boe. Their work shines not only in the romantic seaside shots of the finished garments, but also in the crystal-clear step-by-step photographs and the close-ups of the texture patterns that are the hallmark of gansey knitting.

Also new: the charts, the schematics, and the diagrams, and the entire layout. Without wishing to denigrate the excellent work of the original team, these are a step forward in both beauty and legibility.

Knitting Ganseys has been on my personal knitting bookshelf for longer than almost any other book, yet this edition has made me see it with new eyes. It’s comforting to know it’s still here to inspire another generation of knitters.

Mentioned in this Review: 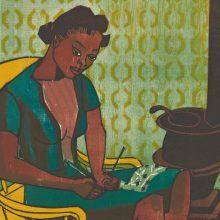 Books with Franklin: Patterns to Knit by the Fire
19 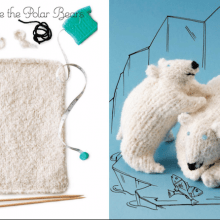 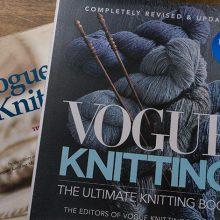