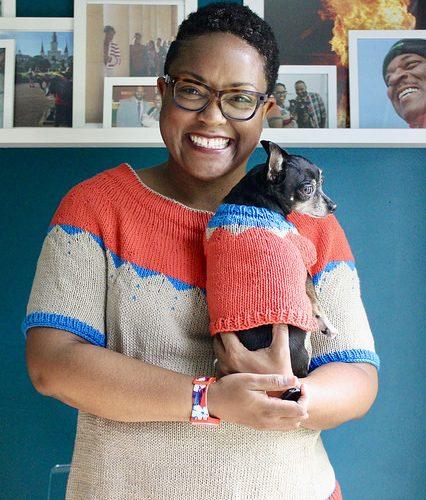 A couple of weeks ago, I saw an amazing photo on Instagram: a beaming woman and yawning chihuahua in matching Durumi sweaters. Who was the knitter who had created such joy? I had to know more about her.

Dana Williams-Johnson must be pretty used to that reaction by now. Her blog, Yards of Happiness, is a journal of her colorful, prolific, and always exuberant knitting.

Dana graciously agreed to answer a few questions. I hope you will find her answers as uplifting as I did. (And if you get an overpowering urge to knit a sweater for a chihuahua and/or pug, don’t blame me—you can thank Dana.) 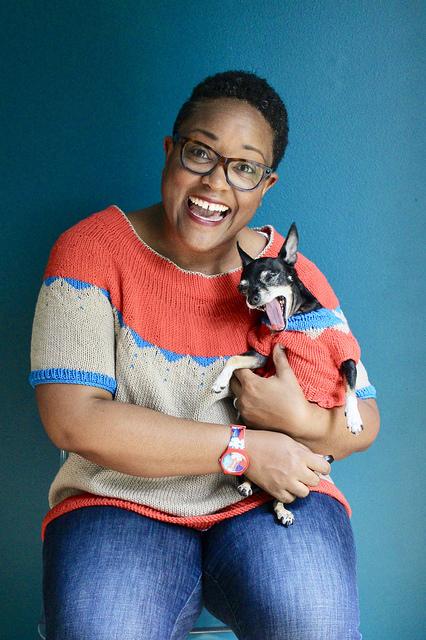 Where do you live (besides Fibre Space)?

Maryland, in the burbs outside of DC.

How long have you been knitting?

I took lessons in 2011 after wanting to learn how to knit for a long time but not knowing anyone who could teach me.

Favorite types of things to knit?

Sweaters . . . all day every day. I knit 27 sweaters in 2017, on top of other projects (here’s my year in review post). I’ve been blessed with the ability to knit quickly! 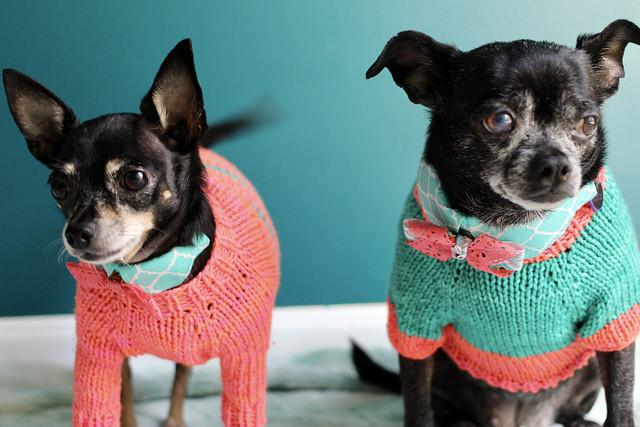 Who do you knit for?

For a long time I knit for everyone but myself, but over the last few years I’ve made filling my wardrobe with the things I want a priority. My dogs Cher and Jellybean get sweaters, although Jellybean gets more since she’s always cold. I have two sisters and a mom who also get at least one sweater a year from me, a cousin in Chicago who is always cold and appreciates a handknit, my husband usually makes one special request a year, and my best friend Jess who is cold 365 days a year and always loves whatever I make her. So really, I knit for people who really appreciate it. 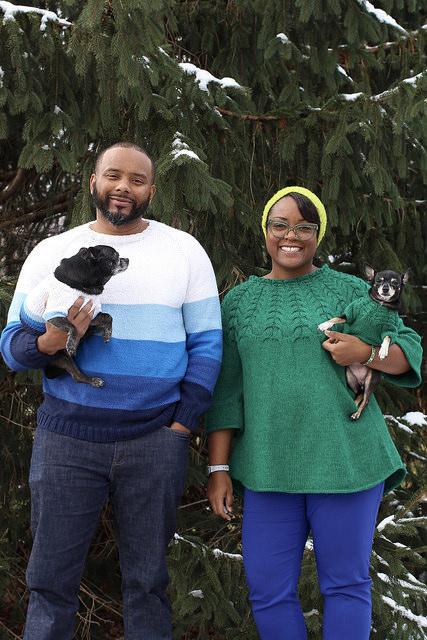 Tell us about that family photo with humans and canines in matching handknits. (LIVING THE DREAM.)

My husband and I try to do a holiday photo/card every year but it became more fun when we got a dog. Our first dog Cher, a chihuahua pug mix, stole the show the first year in a sweater I bought her.

The following year, 2015, I had finally started making sweaters, so we all wore handknits that year. In 2016, we had just gotten Jellybean, and I hadn’t adapted a sweater for her yet or knit my husband a sweater that year, so only Cher and I had matching sweaters, but we all coordinated.

So last year in early November my husband sent me a picture of a sweater he liked and asked if I could make it. I had already made Jellybean and I matching sweaters over the summer, so I worked on a sweater for him and decided I’d just make Cher one to match (he was totally unaware) and that would be our holiday card.

My husband was actually sick when we took the photo but he was like “the snow is melting on the tree in the backyard, let’s make this happen!” My family thinks it’s totally over the top, but I don’t care. It makes me laugh and smile whenever I see these photos. That’s honestly why I do stuff, it makes me happy. We don’t have children, but my dogs are my family and I treat them just like I probably would my own children. (I’ve also gifted matching baby and dog sweaters to friends, too.) And my husband indulges my over the topness because he’s just a wonderful guy who knows I’ll knit him an awesome sweater whenever he asks. 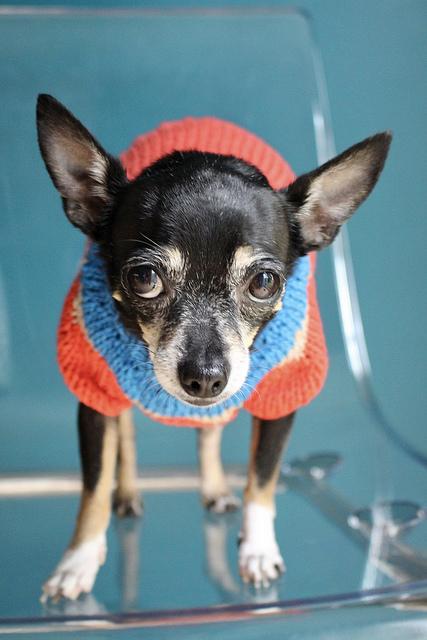 Do you have a go-to basic dog sweater for Jellybean that you use as a template when you’re cooking up her mini sweaters?

I love, love, love the book Seamless Knits for Posh Pups. It’s a great foundation to base other patterns on and figure out top-down dog sweater construction. I recommend it to people whenever they say they want to knit a dog sweater. 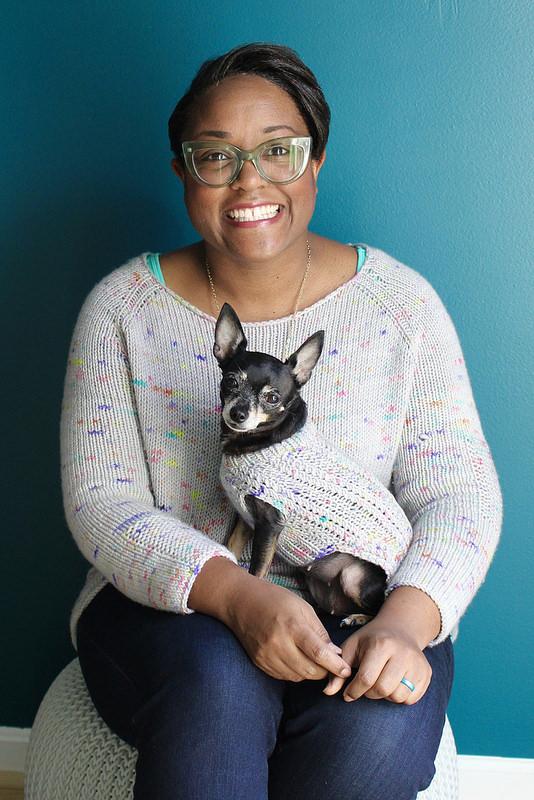 How does Jellybean feel about sweaters?

You mainly see Jellybean in sweaters and not Cher as often, because Jelly is always cold. When she sees clothing, she tucks her front legs down and drops her head, so you can easily put something on her. I think she appreciates the handknits. She’s a five-pound short-haired chihuahua, so when her body temp drops it’s harder for her to bring it up without assistance (we have heated beds all over the house).

Cher wears sweaters in the colder months, and they always look so cute on both of them. I especially loved making them this coordinating set when I knew we’d be taking them with us to Memphis, and I wanted them to look good for family. My girlfriend made them their dog collars the year before and I realized I had yarn in my stash left over from sweaters that would coordinate beautifully. My 90-year old-uncle was so tickled when he saw them and just kept saying, ‘that dog is wearing a sweater, my goodness!’ They were the talk of Memphis that Thanksgiving (at least I like to think that).

What are the interesting facts about Jelly and Cher?

Cher and Jellybean are both rescue pups. We adopted Cher when she was nine in 2013. She was my first dog ever. We loved Cher so much and didn’t want her to be alone, and wanted her to have a companion, but she hated everyone. Jellybean came along in the summer of 2016, and Cher didn’t seem to mind her so we took her home. On occasion they fight like sisters do, but for the most part I can find them on the doggy camera snuggled together on the couch. They live for baby carrots, couch snuggles and belly rubs, and they are the best companions when I’m knitting. Both enjoy taking a trip to my favorite yarn shop.

What do you think you are up to with knitting? What does it bring to your life?

I love knitting because I always feel like I’m learning something. A new stitch, a new technique, a new cast-on something. I’m always excited to try something new and try to master a technique.

Each year I focus on something, so this year I’m working on two-color brioche and colorwork. My Tecumseh sweater was my first colorwork project ever. I did it in cotton, and everyone was like “you know that’s hard, right?” Well, if you don’t know something is supposed to be difficult, you have less fear, so to me it wasn’t that hard. I’d like to get better at it, so I’ve got more colorwork projects I’m looking at this year, I’ve already got the yarn for a Sunset Highway sweater.

For the most part, knitting brings me so much comfort. My father passed away a few years ago from pancreatic cancer. I had knit throughout his illness, and I found it soothed me. When he passed, I was working on a sweater,  and people would talk to me about the sweater and knitting instead of asking the obvious questions like “how do you feel?” (Uhh, horrible, because I just lost my Dad.)

My knitting shifted the focus and allowed people to find a better way to approach me and talk to me during a tough time. And on another level it brings me joy, especially through the community of women I get to interact with on the blog and social media. I tell people all the time that I’ve never been part of a more loving and caring community than when I joined the yarn community. Everyone is eager to help, share encouragement and just be awesome to each other. I love it!

Do you have a day job and what is it?

I’m a Director of Social Media for an association in DC, and a college professor. I teach Social Media Marketing at my alma mater, Howard University, where I’m known for knitting while my students are taking a test.

I see a lot of cotton in your FOs. Do you switch fibers easily?

March to August is cotton knitting season for me, with the warmer temps, then I start to switch back over to wool as it gets cooler. But I don’t discriminate. I’ll knit with any fiber or any color.

How many Carbeth cardigans have you knit? How many more will you knit?

So far I’ve knit two Carbeth cardigans, both with Periwinkle Sheep Intent yarn. One was for myself and the other was for my cousin in Chicago. I think my best friend Jess wants one too but in a darker neutral, so I’ll probably whip one up for her birthday this year. I also have the pullover pattern, so I plan to make myself a pullover version for winter as well. I just haven’t decided on the color.

Are there designers that you knit again and again?

I love Jane Richmond, West Knits, Bristol Ivy, Carrie Bostick Hoge (I’ve probably knit her patterns the most) and Heidi Kirrmaier. They all have simple shapes but interesting details. I’ve also been playing around with making up my own stuff that I dream up in my head. But my pattern library is huge and I love recommending to people first-time sweater patterns and designers they’ll find easy to follow.

Any advice for your fellow knitters?

I think people are attracted to my projects, Instagram and blog because they think of joy/happiness when they see my pics (hence the name Yards of Happiness), but I attribute a lot of that joy to the use of color. So many knitters knit in neutrals, but how can you not smile when you’re wearing a bright red sweater you made? My blog is just as much about the knitting and yarn as it is about a study in colors. Put down the neutrals and explore the rainbow! 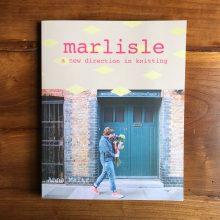