78 Comments
Home » Projects » Shakerag Top: The Finish and the Fit

Shakerag Top: The Finish and the Fit

A few of my pals on the social medias are expressing wonderment at how quickly I sped through the knitting of my Shakerag Top. It clocks in at size XL, so it’s a 5-skeiner–not what I would generally think of as a Quik-E-Knit. But in the space of under three weeks in late April and early May, I traveled to the West Coast (for a knitting retreat aka lots of sit & knit time), then back to New York, and then got on a plane to France. I spent a week there with my ever-lovin’ Most Moisturized Mom, being transported around the countryside and in and out of Paris.  The whole time, I worked on my Shakerag Top to the exclusion of all other projects that were calling to me seductively (as projects do).

And so, early on in my stay in France, I got to plop a fully knitted Shakerag Top on an old herringbone floor. 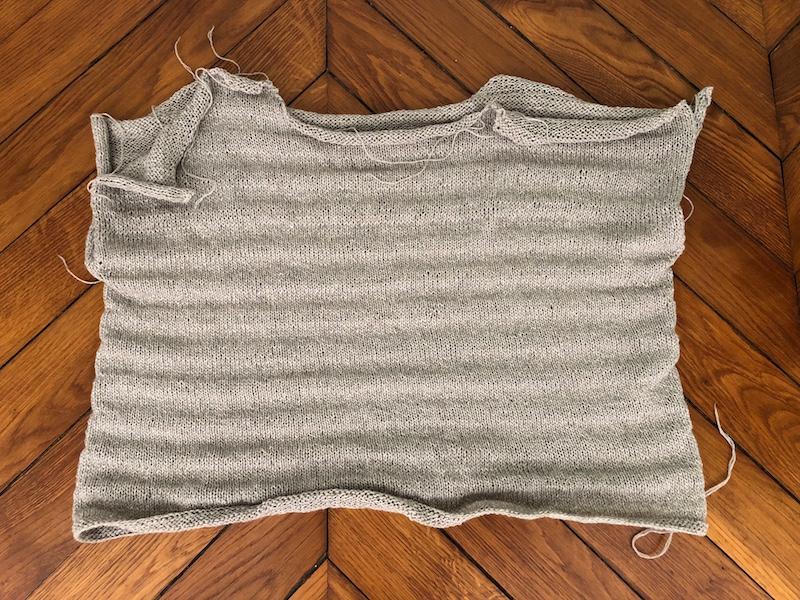 The sweater doesn’t look like much, but the floor is great.

The finishing on the Shakerag top is simple:  two shoulder seams, and a simple faux crochet edging on the neck and sleeve openings. Just an hour or two of work.

An hour or two of work that I refused to do when I realized that I had not packed my Clover Wonder Clips. (Clover Wonder Clips are not only very practical, they have become my good-luck charm for finishing things.)  So I cast on something else from Field Guide 6. (More about that later.)

My first Monday home, I summoned all my Project Fidelity virtue, and worked those two seams and finished those three openings, and wa-la: 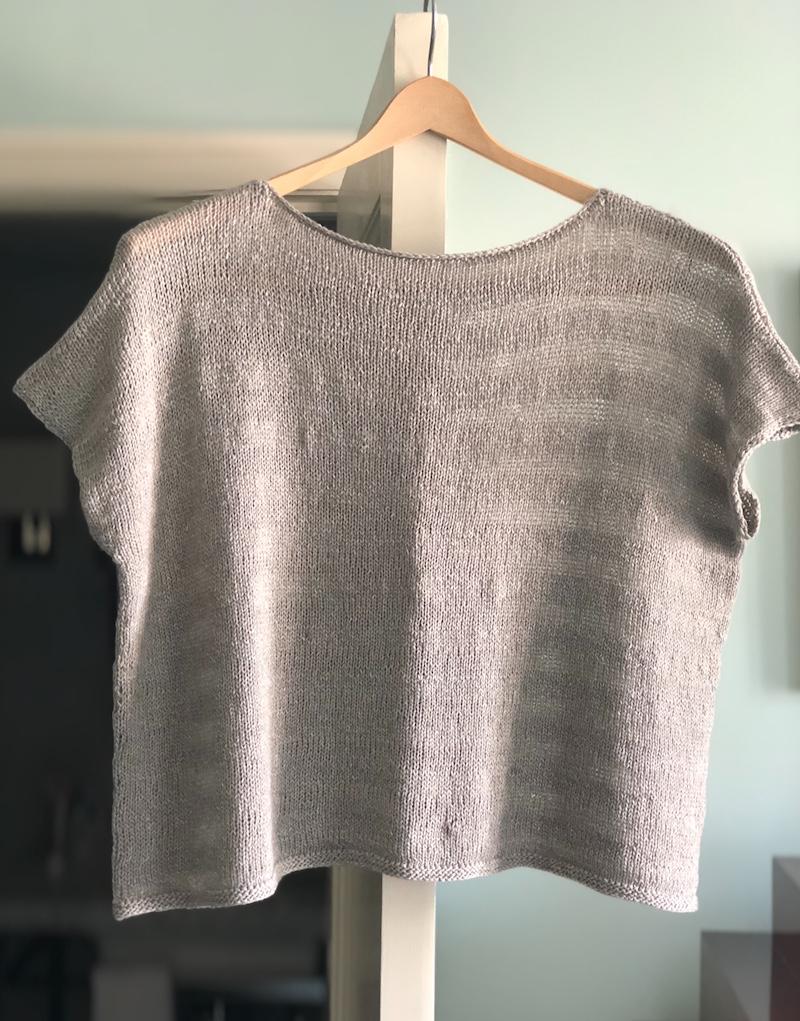 Looking at it straight on, the stripes are subtle, more of a texture than a surface design element. 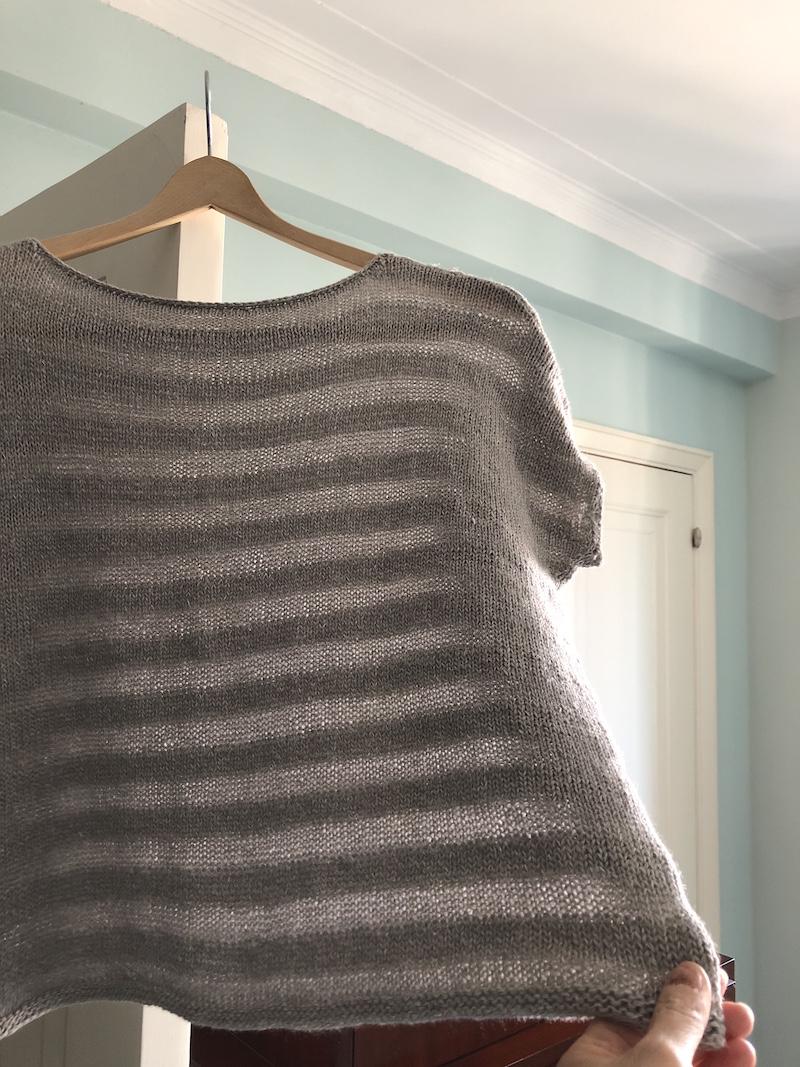 But in the light, the transparency happens.

I know knitters over in the Lounge have been curious about the fit of this garment. It’s a straight, boxy shape, so if you under-shoot the sizing, you risk the Woolly Bathing Suit Effect, but if you over-shoot it,  you could look swamped and sloppy. After a look at the finished dimensions on the pattern schematic, I chose to knit the XL, to reach the dimensions of my favorite boxy sweater, Relax.

It seemed like a good bet, but one can never be sure about fit until one finishes the sweater. That’s a hard truth about the whole sweater-knitting enterprise, isn’t it? You knit, and you learn, and you measure, and you make educated guesses, but the truth only comes out when you get it all finished and blocked and put it on your body. 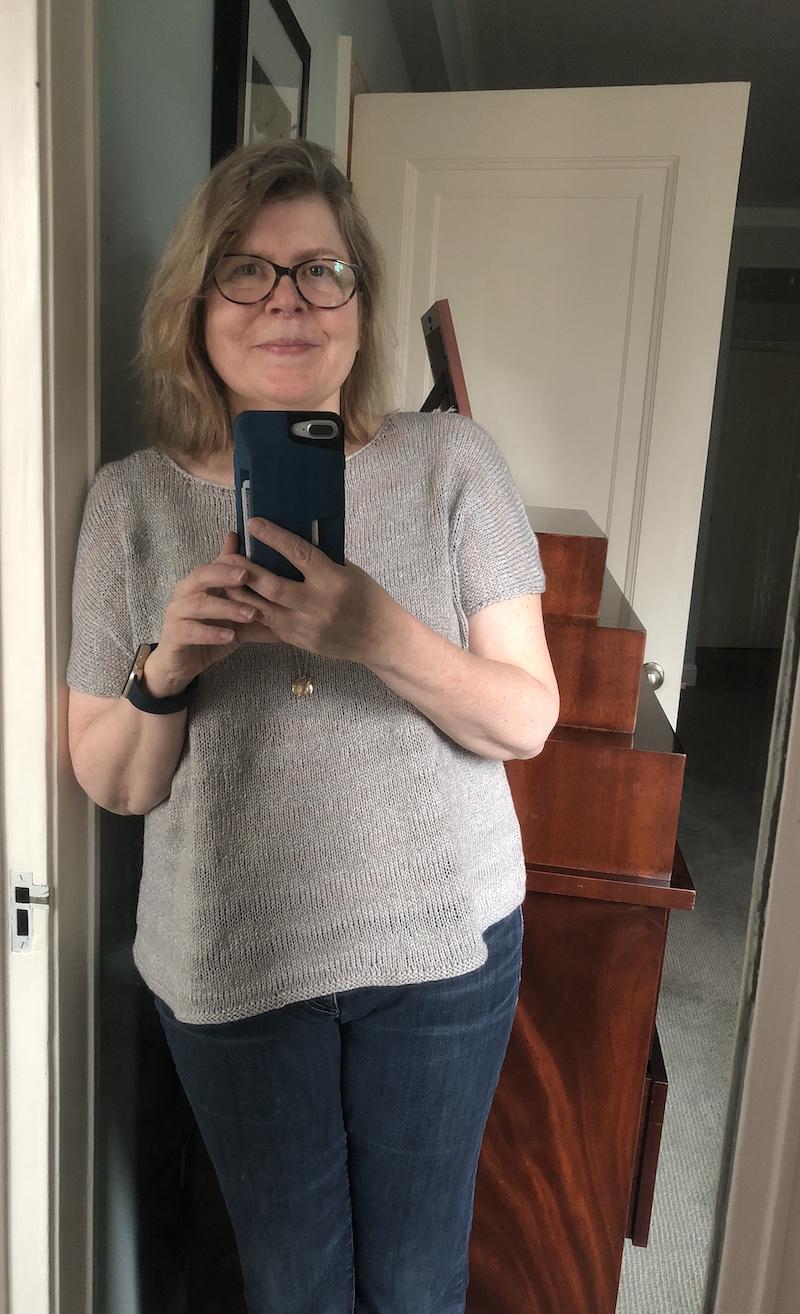 I’m well pleased. My Shakerag Top fits exactly the way I wanted it to. It hits at the right spot: the hip bone aka the spot where my hip bone surely must be, down there somewhere. It blouses gently in the back, creating a kind of a swingy shape. It skims the Waist Area without landing or sticking anywhere.

I’m going to wear the heck out of it.

As you can see, it’s not exactly transparent, but you do get a hint of what’s underneath (delicate flesh). I think I’ll be getting a snug tank to wear under it, because that’s the way I was brought up by strong midwestern women, most of whom are up in Heaven clutching their pearls at what passes for a foundation garment in my wardrobe these days. I’m also going to try it Karen Templer style, with a longer shirt underneath. Shirt on shirt is always a good idea.

Clever Things in the Pattern

The big clever thing in this design, of course, is the way the beautiful tone-on-tone stripes are created by alternating double and single strands of the yarn. I had no real worries, because Amy Christoffers would not lead a knitter astray, but as I was knitting it I sometimes thought the fabric might turn out heavier than a spring/summer top ideally ought to be.

Not so!  It’s light and flotatious, with just enough heft to showcase linen’s trademark swing. I’m more in love with Sylph than ever. (The shade: Rustle.)

A smaller clever thing: the finishing of the neck and armhole openings. It’s done in the simplest way possible. Years ago, I finished an edge this way, and called it Cro-Kay, i.e., crochet for people like me who want to knit their crochet. You pick up stitches along the edge, and then, on the very first row, you bind them all off. It’s a snap, and gives much the same effect as working a single crochet edging.

Again, I trusted Amy, but at the same time I wondered whether this edging might feel too taut.

Not so! It’s just a clean, simple finish. 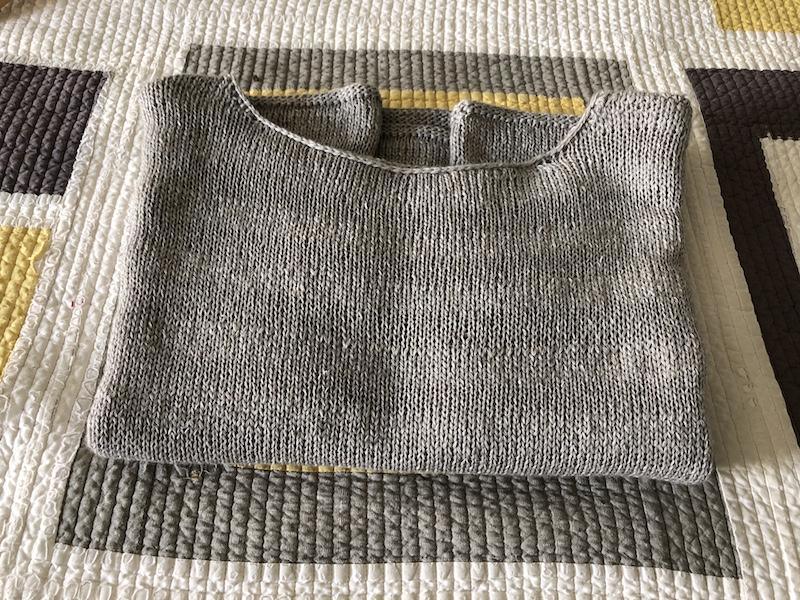 Do Not Worry About

If you’re knitting a Shakerag Top, you may wonder, when you get to the armhole instructions, whether the armholes are deep enough. I did. They seemed a bit shallow: 7 1/2 inches in the XL. I hate a tight armhole. I’ve got stuff to do, and a lot of it involves moving my arms.

Do not worry about this.

The wide shoulders of the Shakerag Top cause the armholes to sit halfway down the upper arm.  That’s why the top turns out short-sleeved and not sleeveless.  You have plenty of range of motion because, under your armpit, there’s absolutely no lower boundary; it’s still the body of the sweater. Think: batwing or Dolman, without the exaggerated silhouette usually associated with those styles. 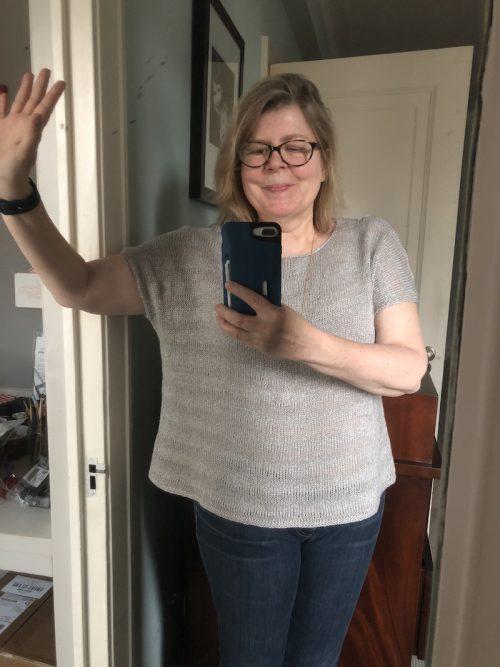 See? It’s super comfy. Not sure this picture is showing it, but there’s no tightness even when I flap my arms around. Imagine if I’d knit the armholes an inch or two deeper: there’d be extra fabric dangling under my arm. (And I do not like the word “dangling” mentioned anywhere near my arm.) With Amy’s trim design, there is no danger of flashing your bra at anyone through the armhole. I find that comforting.

Clever Things Not in the Pattern

The Shakerag Top pattern is only a few weeks old, but at least one knitter has already thought of a  clever modification. 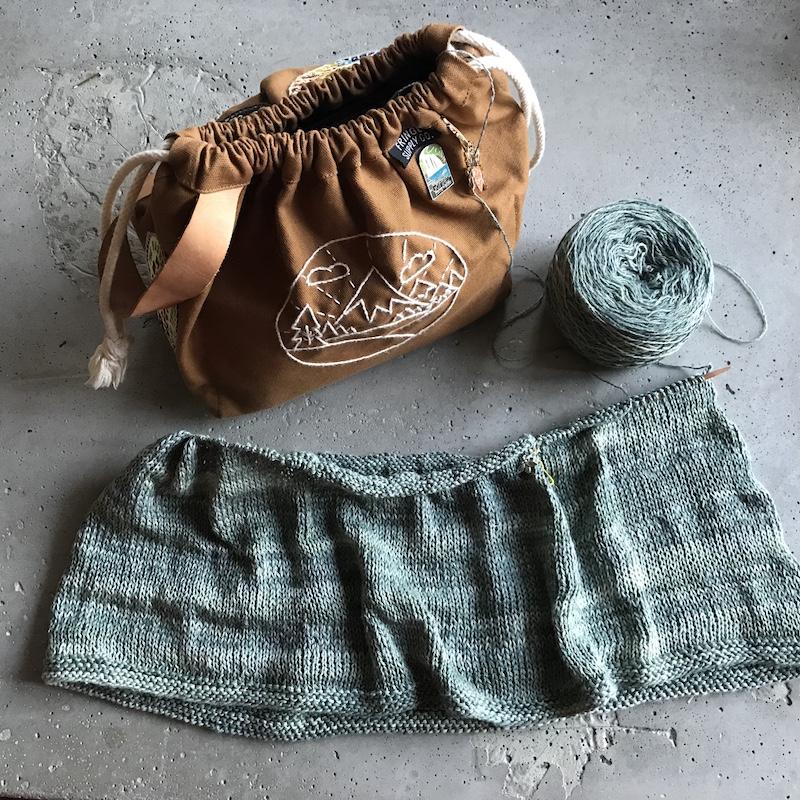 I was loving Kelley’s version already, and then she showed how she worked an afterthought split hem. 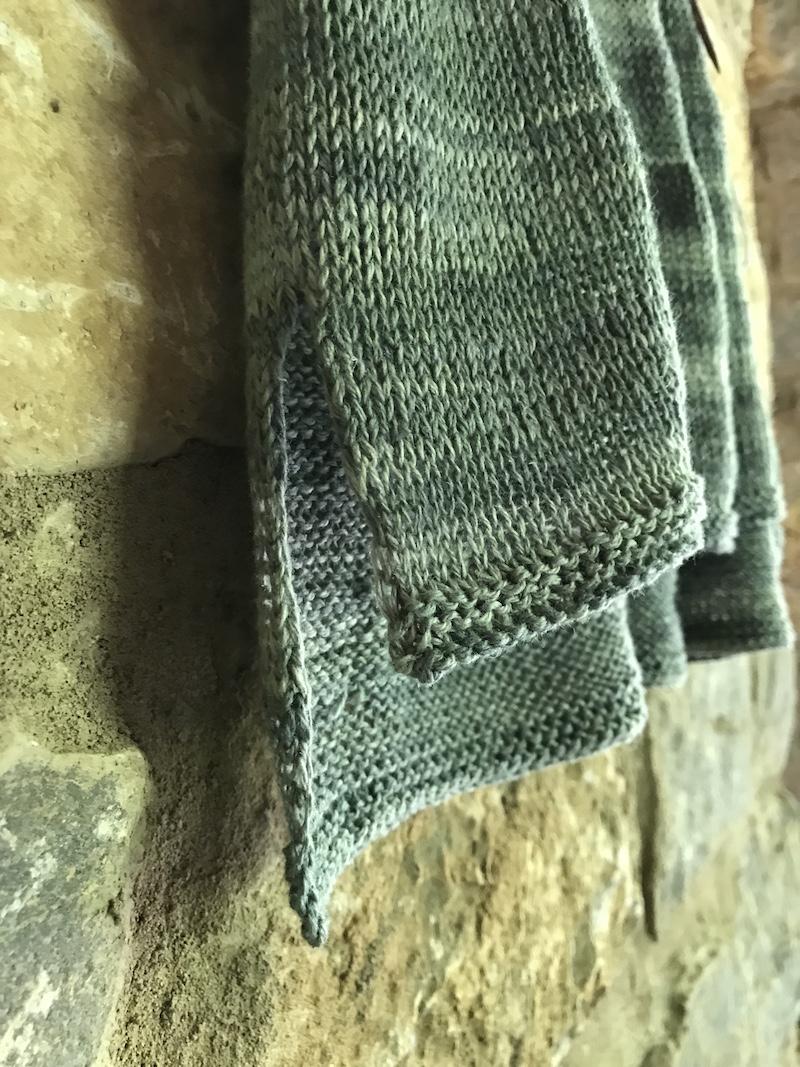 She patiently unpicked the cast-on, and knit down, back and forth, longer in the back than in the front. 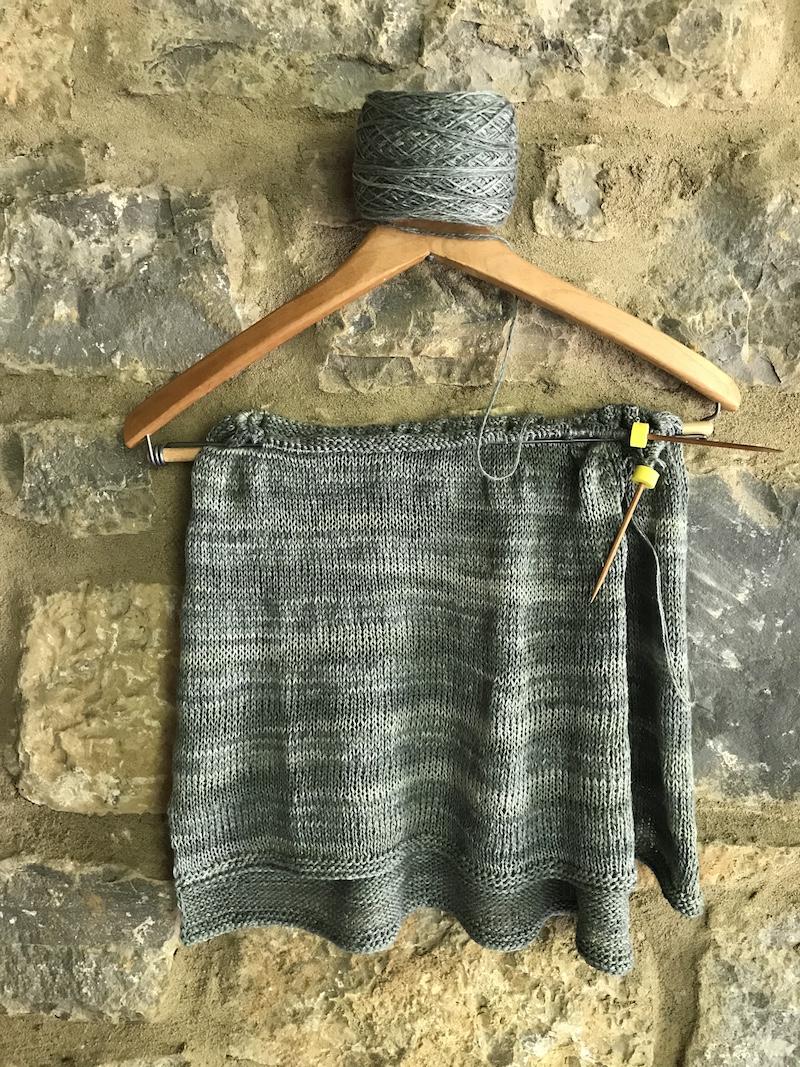 This looks so lovely, and a long split hem is such a favorite fit of mine, that I contemplated doing it myself.

Then I came to my senses. My Shakerag Top is FINISHED. And now that I’ve tried it on, I like my hemline exactly the way it is. But my hat is off to Kelley for thinking of a neat modification to suit her own style, and having the temerity and engineering chops to execute it. (It would be even easier without the unpicking!) 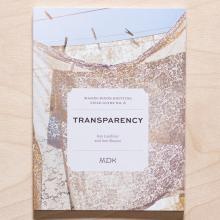 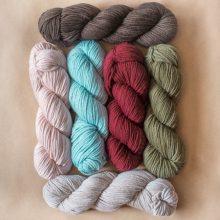