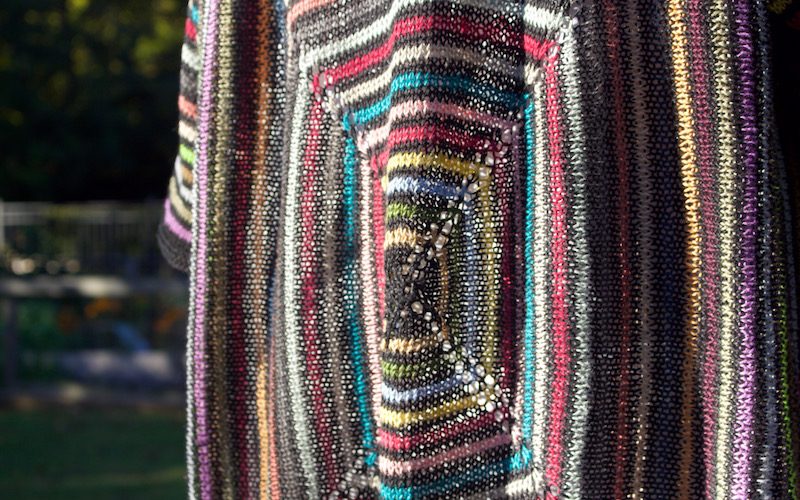 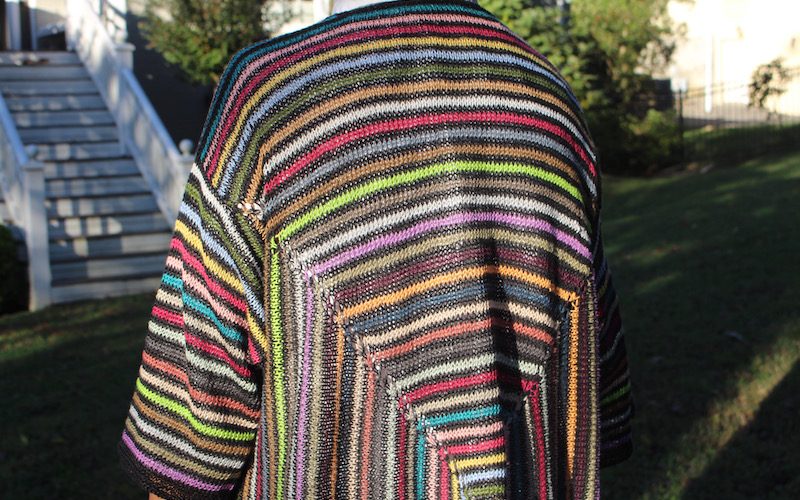 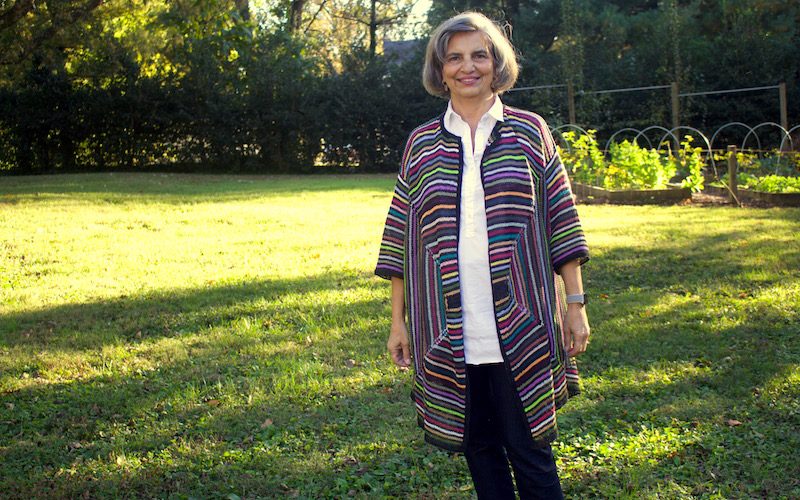 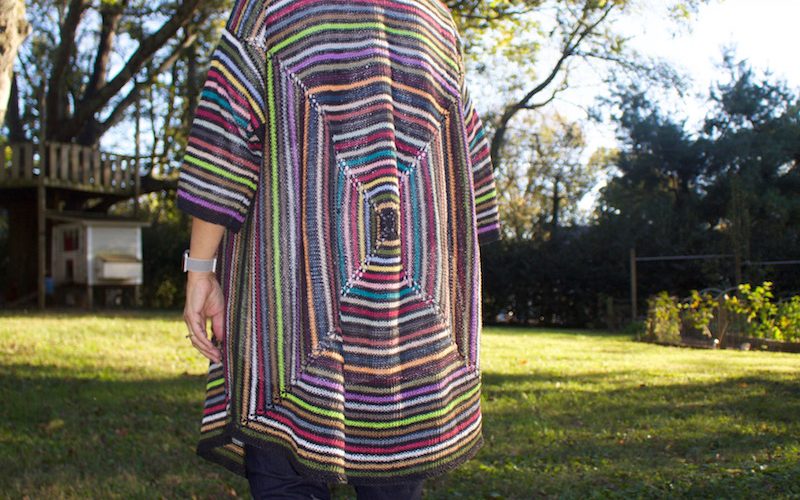 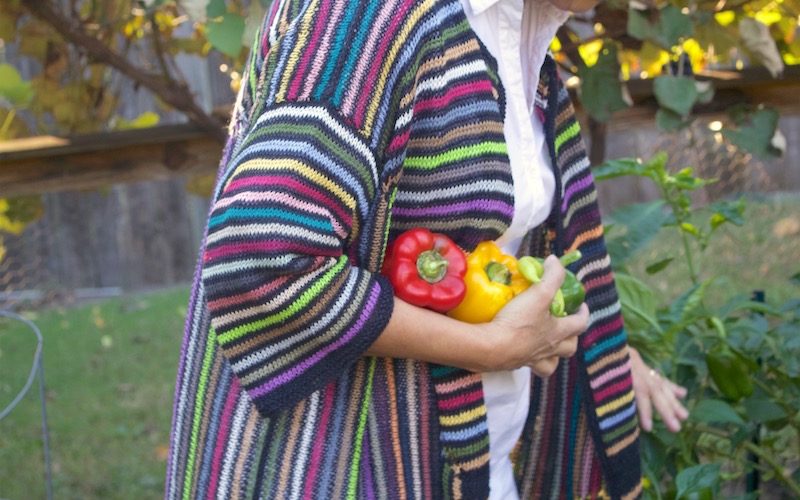 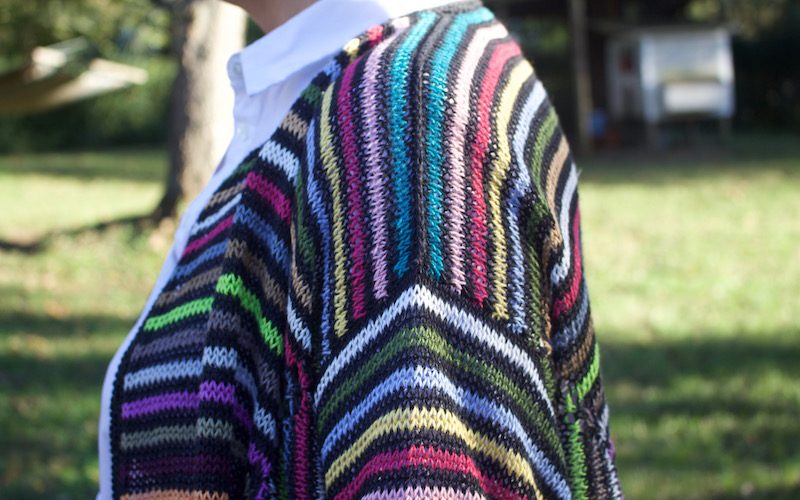 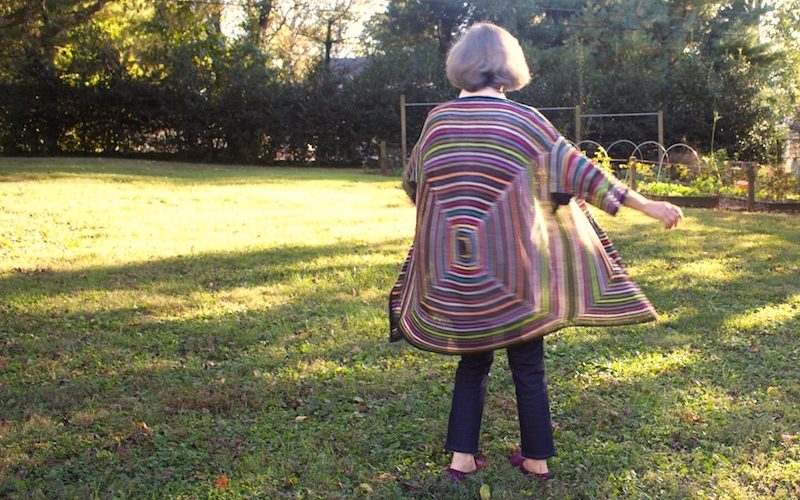 In Search of the Perfect Linen Knit (Part II)

At the end of Part I, I had reached a decision on what to make with my Euroflax Super Mega Bundle (a set of 30 mini-skeins of sportweight linen yarn offered here in the MDK shop): it would be a kimono-style jacket, and I would knit it in mitered squares.

Before I started to knit, I arranged my mini-skeins in the order I wanted to use them in my striping pattern. I found a plastic craft organizer that was separated into compartments that were just the right size to accommodate a mini-skein each. My organizer had 24 compartments and I had selected a total of 25 colors (apart from my background color, black). So each mini-skein had its own compartment apart from the white one, which I allowed to roll around freely. 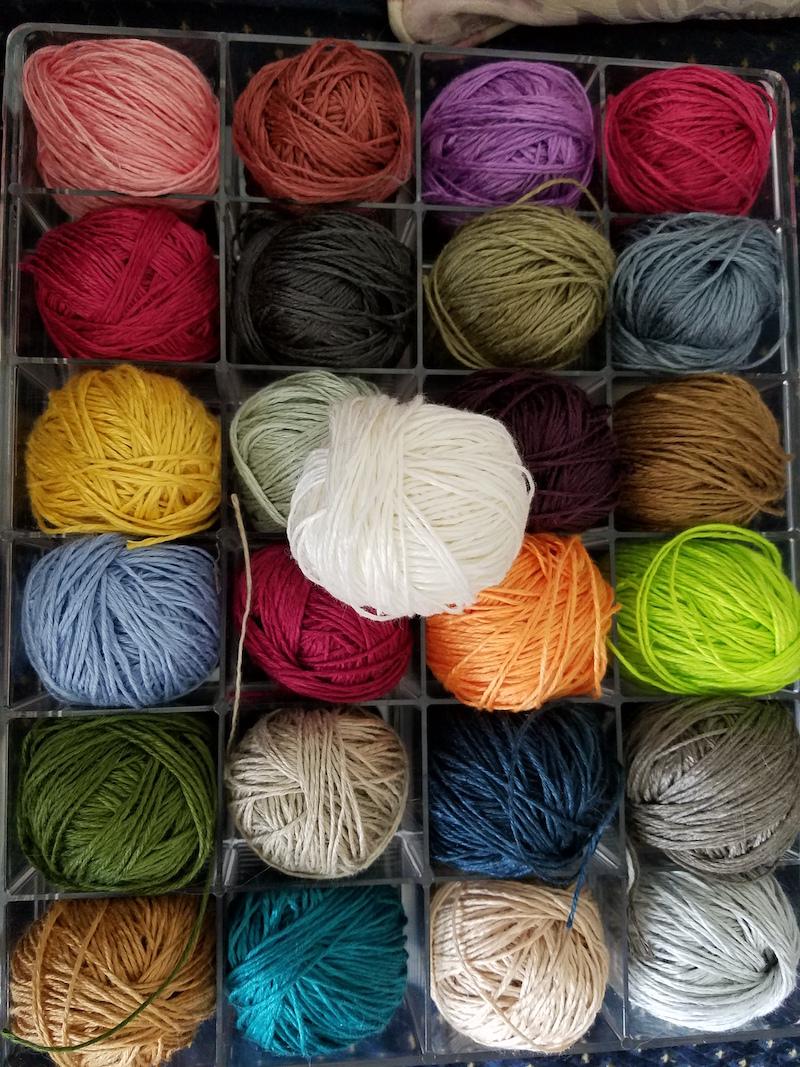 (Editors’ Note: That rogue ball of yarn without a proper cubicle worries us, just a little.)

Using a U.S. size 4 needle, I cast on 12 stitches with the black yarn and divided them over 4 dpns. This was the start of the back of my jacket, being worked from the center out. I began my square: 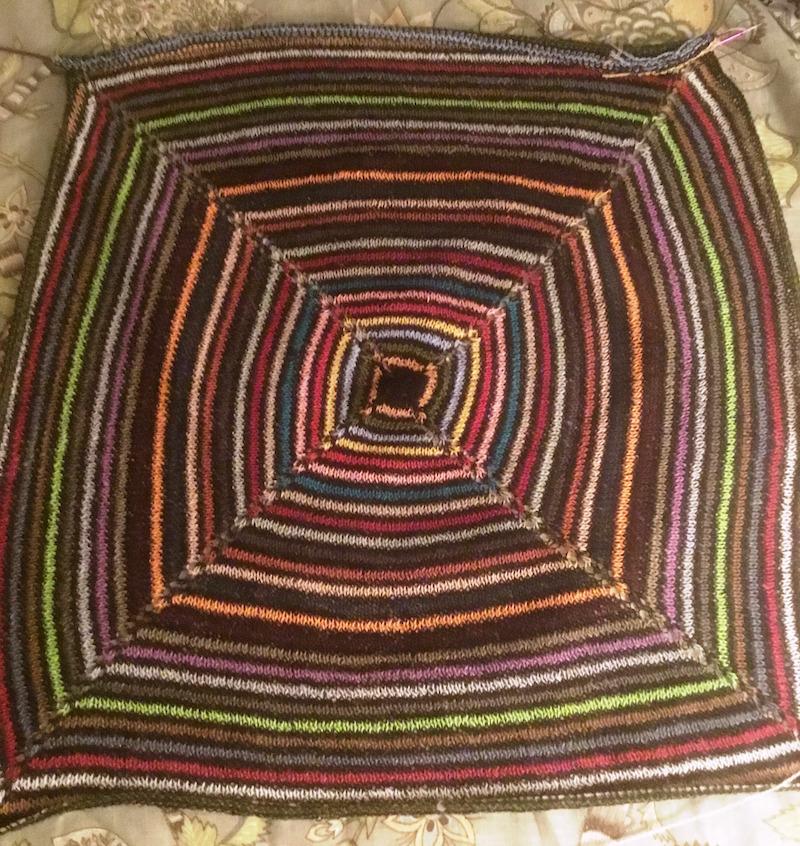 I bound off the two sides, left the bottom stitches live on a length of yarn to be picked up later for a bottom border, and then knit back and forth in stripes across the top of the square to turn it into a rectangle. When the rectangle was the length I wanted for my jacket, I stopped and put those stitches on a length of yarn as well. I had the back completed.

Onward, to the Fronts

The side fronts were a little trickier, as each one needed to be half of a mitered square. I knit a small rectangle in black, so that I had live stitches along the top of the rectangle. I then picked up stitches across the short end, and along the bottom, so that I had live stitches on three sides of the rectangle. I then did my mitered YO increases in the two corners, working the piece until it was the same height as my back triangle. I then cast off the side, again keeping the bottom stitches live to be used later for the bottom edging, and worked in stripes along the top, working in front neck decreases as I completed the same number of stripes as I did the back.

I worked a second side front mirror image of the first one. 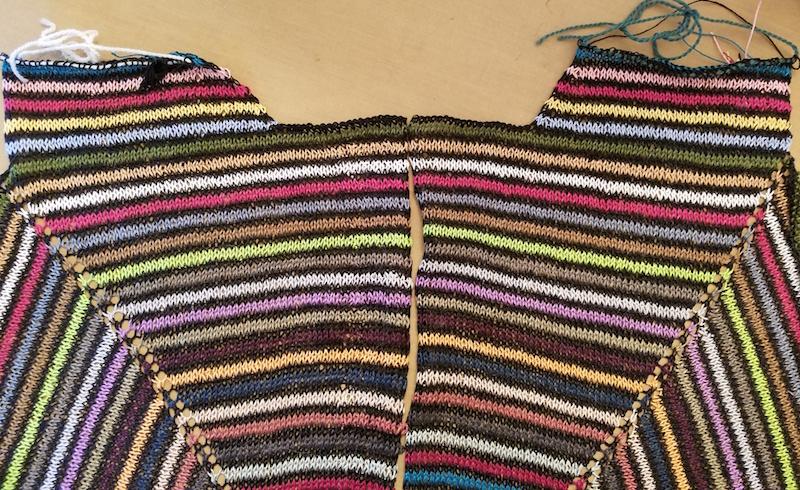 I attached the back to the side fronts using a three-needle bind-off with an exposed, raised seam on the right side. I decided the neckband, front band, and bottom edging would be worked in black, in rows of garter stitch. I went down to a U.S. size 3 needle for all the garter stitch bands.

Picking up stitches to knit a band from linen is a bit challenging due to the lack of stretch in the fabric, and doing so on a striped piece was doubly challenging since the ends of the stripes were a bit, for lack of a better word, wonky. I had woven in the ends as I knit each stripe but had not trimmed them. This turned out to have been a very good plan, as I was able to pull on the ends to tighten up the edge of the piece after I picked up stitches. 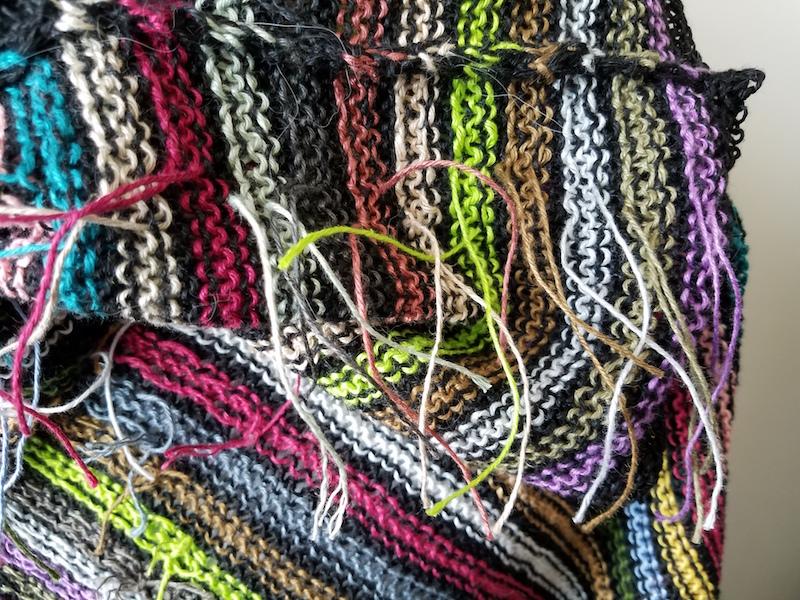 I spent an entire Saturday picking up stitches and knitting, and once I had all the bands completed, I picked up stitches for the sleeves and knit them down from the body, ending each in a black garter stitch band.

Once the sleeves were done I could sew up the side seams and put all the live stitches from the bottom of each piece on a needle and knit a garter stitch band around the bottom of the jacket. I laid the jacket out on my dining room table to admire it. 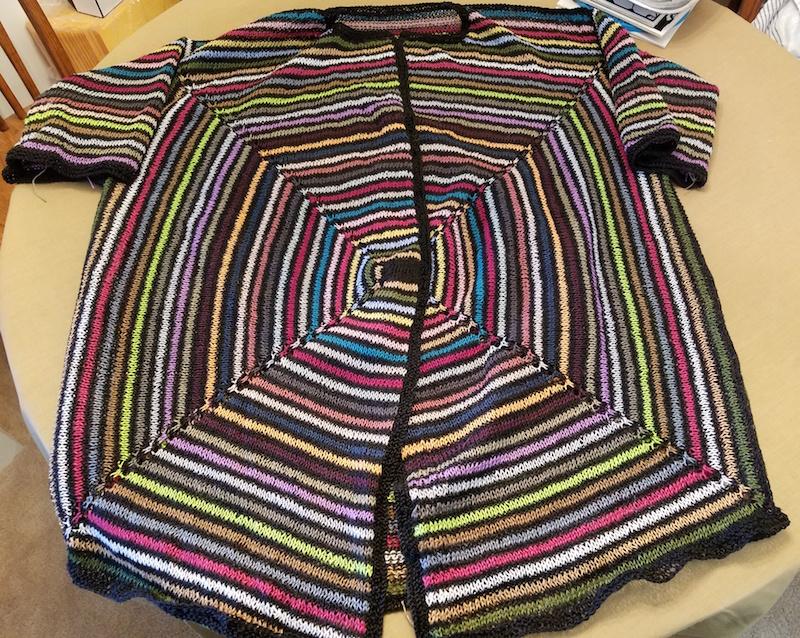 It was finally time to send my jacket on a trip through the washer and dryer. I put it in the washer with warm water, a detergent formulated specifically for linen, and two black cotton kitchen towels. I ran a gentle cycle and crossed my fingers. At the end of the wash cycle, I found an impressive amount of lint in my washer, to the point that I had to wipe down the drum with paper towels.

I tossed the jacket into the dryer, along with the cotton towels and three felt dryer balls scented with lavender essential oil. I stopped the dryer three times mid-cycle to clean out the lint trap. When the jacket was dry, I went over it with a steam iron, just to straighten out the edges. Only then did I trim all the woven-in ends. 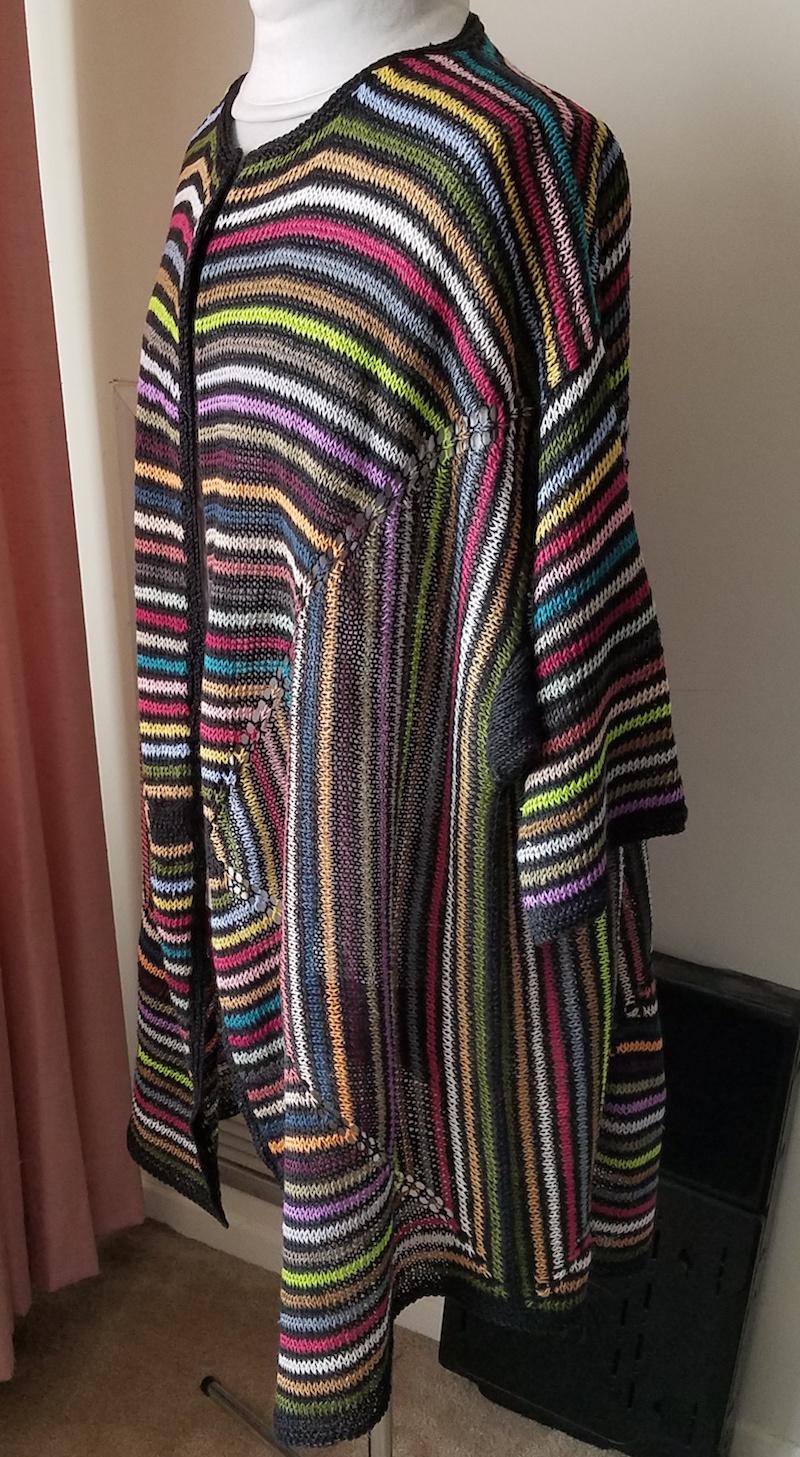 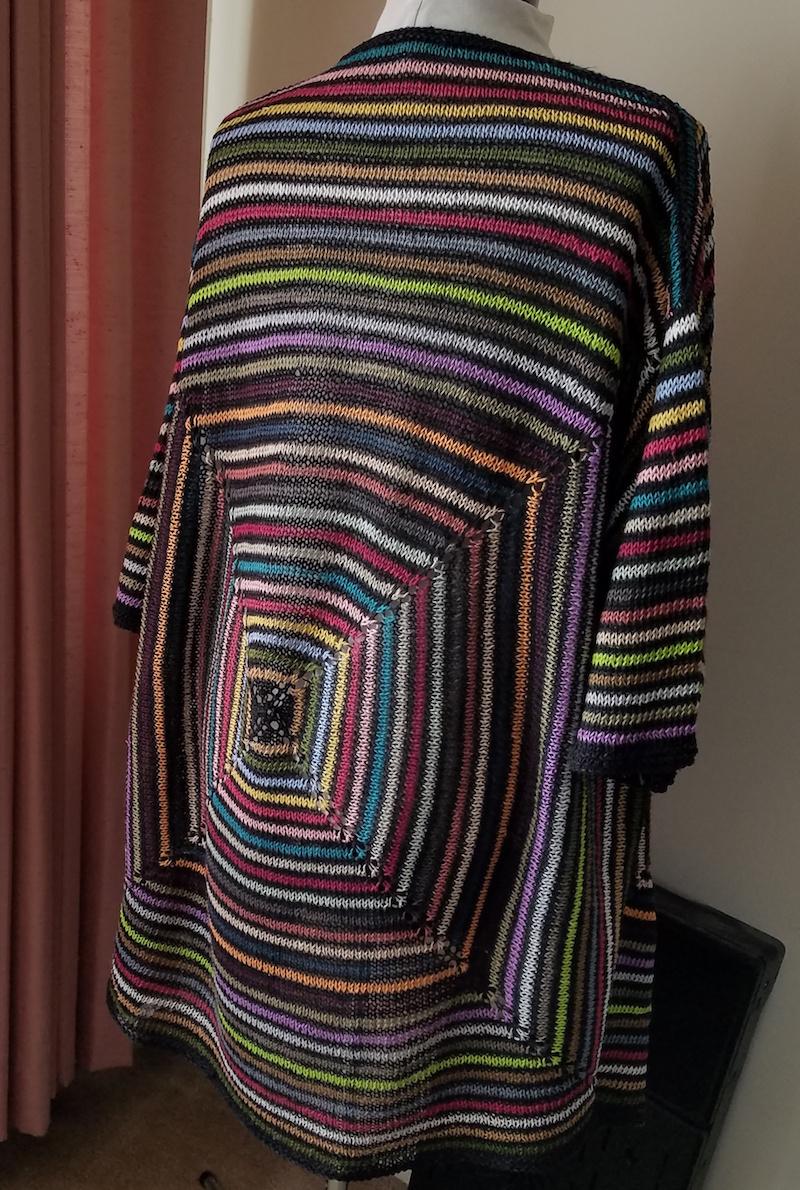 I sent it along to Ann in Nashville, to take photos modeled by her neighbor, Judy, as shown in the gallery above. 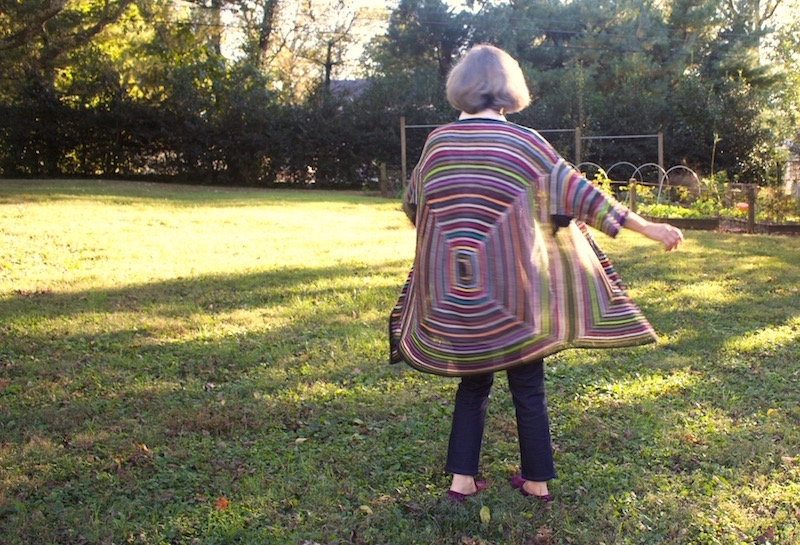 A huge thank you to Wendy, for conceiving and knitting this beautiful linen kimono, and to Judy wright for modeling it in her nashville garden. These photos make us so happy.

In Search of: The Perfect Linen Knit (Part I)
28