The Coy of Cooking: Adventures with Bettina (Part 3 of 3) 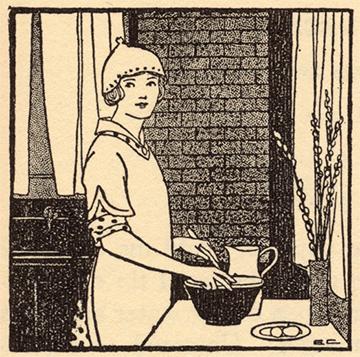 The Coy of Cooking: Adventures with Bettina (Part 3 of 3)

Even if you’re a devotee of old domestic manuals and other antiquated writing aimed at women–and I am–the chirp and chatter of A Thousand Ways to Please a Husband can make for tough reading.

Our heroine Bettina is (as I noted in Parts One and Two) as flawless as a dew-covered morning in May. On the page, it means she’s surrounded by a fluttering cloud of admiring friends and relations; not to mention a husband who never fails to exclaim at her ability to transform a fistful of leftovers into Belshazzar’s Feast. In real life, people like Bettina are hard to bear. Nowadays she would be posting photographs of every dainty meal on Facebook and Instagram and you would have unfollowed her months ago.

In writing this little series, though, I’ve had to spend more time cuddled up with Bettina than ever before. And when you read A Thousand Ways closely and often, you begin to catch startling glimpses of something unexpected. Something that might even, perhaps, have been a little subversive for 1917.

We Need to Talk About Bob

I’d probably gone through the book two dozen times before it struck me how often Bob–even at the end of a hard day at the office, with grease on his Palm Beach suit–volunteers to help out in the kitchen. It may only be by washing the dishes, or it may be (as in Chapter Five, “Bob Helps to Get Dinner”) shaking up the salad dressing and slicing a lemon. In Chapter 22, from which comes today’s recipe, Bob is at Bettina’s side, rising early, to help prepare for a luncheon party with a special guest.  Not because she ordered him to, but because he insisted on it.

The authors don’t treat this as anything exceptional. Bettina (perfectly politely, of course) always thanks him for his help–but then turns the conversation back to her centerpiece of coreopsis or the tenderness of her filet steak.

There are hints elsewhere that Bettina’s readers ought to expect not only appreciation, but assistance, from the man of the house. In Chapter 36, “A Kitchen Shower for Alice,” the gag-inducing rhymes flung at the bride-to-be include these two couplets pinned to a set of dish towels:

No matter what his whims and wishes––

Just tell him he must wipe the dishes!

But if he breaks a cup or plate,

Just throw the pieces at him straight.

A Guest for Breakfast

The real eye-opener for me was Chapter 22, “A Porch Breakfast.” Bettina and Bob are up early, working in the kitchen, and ditzy ingénue Ruth (who exists to mess things up so Bettina can fix them) is due at 8 a.m. to pick up the slack when Bob heads to the train station. He’s meeting an important guest, the guest of honor at the porch breakfast: Bob’s Aunt Elizabeth. 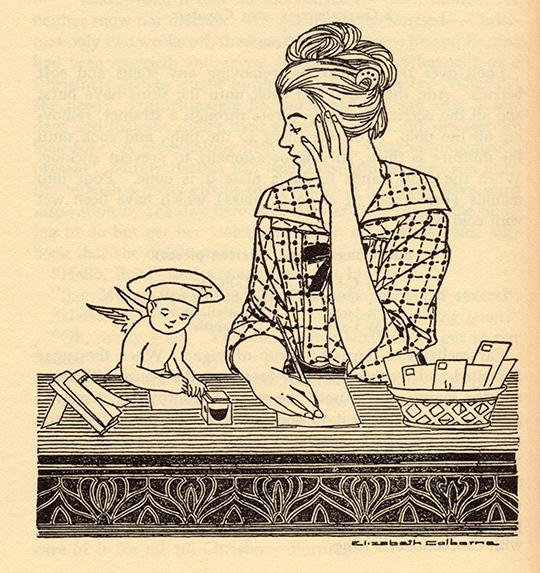 Here’s the thing about Aunt Elizabeth. She’s not a bride-to-be like Alice, or a befuddled matron like Mrs. Dixon (who simply cannot understand what a refrigerator is for, my dear). She is a suffragist, and she has come to town, “in conference with some of the leading suffragists of the city.” Bettina is laying the table for six, and the centerpiece–in a sly but unmistakable nod to the cause–is “great graceful yellow poppies.”

(If you are familiar only with violet, white, and green as the colors of women’s suffrage, note this report from an American woman at a Louisville, Kentucky suffrage convention in 1911, collected in History of Woman Suffrage: 1900-1920 by Elizabeth Cady Stanton, et. al:  “We all have votes-for-women tags on our baggage, yellow badges and pins, California poppies and six-star buttons on our dresses and coats…”.) 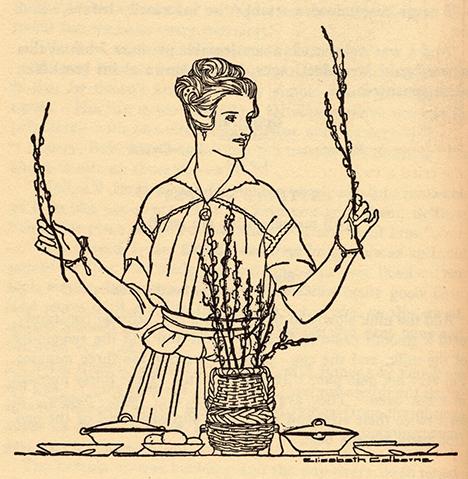 The poppies are about as militant as Bettina gets, beyond admitting to Bob that, “the whole suffrage cause is on my mind this morning…”. But to the reader with a listening ear, the pro-suffrage message of A Thousand Ways is clear. Rather than being a monstrous virago or a figure of fun, Aunt Elizabeth is “beautiful, distinguished looking.” She is an object of admiration, not only for women but also for men. Bob himself seems somewhat in awe of her, and she’s strong enough to carry her own bags from the station, thank you, in spite of his offer of a taxi.

The authors give a hint of steel, in other words, beneath Bettina’s taffeta and bows–and I like her the better for it. I hope that when American women* earned the right to vote, three years after A Thousand Ways was published, that Bettina threw off her apron and danced in the street.

*The white ones, anyhow. Sigh.

Why not celebrate the ongoing movement, as Bettina did, with… 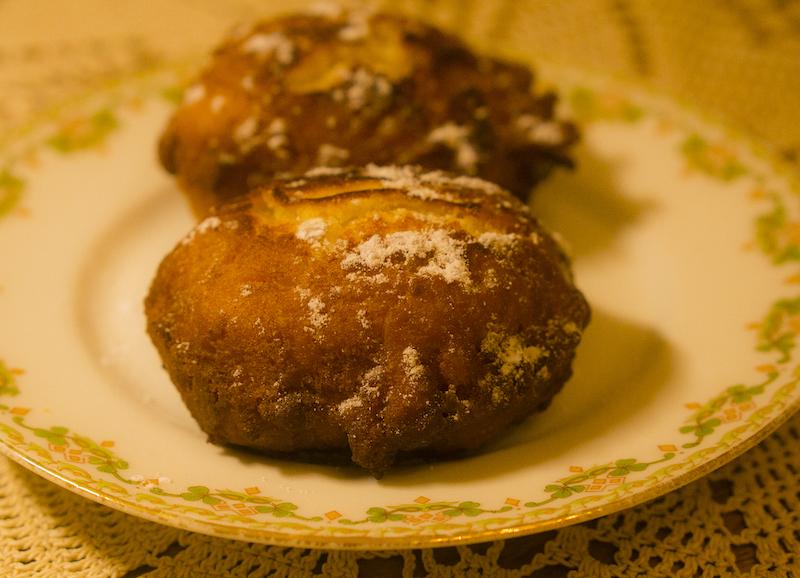 As in Parts 1 and 2, the recipe first follows more or less as originally written, followed by my own notes on the process and–of course–the reaction from our panel of husbands.

Beat the eggs, add the sugar. Mash the potatoes and add the butter and milk. Add this mixture to the eggs and sugar. Add the flour, baking powder, salt, nutmeg, and cinnamon sifted together.

Roll one-fourth of an inch thick, cut with a doughnut cutter, and fry in deep hot fat.

Make no mistake: I tried this one because I wanted to find out what the hell a potato doughnut tastes like. Potato and doughnut were not, until now, words that I had ever thought to place together.

I followed Bettina’s recipe almost to the letter. As I haven’t got a doughnut cutter, after rolling out the dough as directed I sliced it up into nuggets about the size of a tablespoon, using a sharp knife. You don’t want the pieces to be too big, or they won’t fry all the way through before the exterior is burnt. Aim for something akin to a modern “doughnut hole.” Flour the counter generously before you roll the dough.

I know you can’t just say “potato” in a recipe these days without people getting concerned. “But … what kind of potato?” they ask, wringing their hands. My mother would have said, “You know—just potatoes. Potato potatoes. Don’t make such a big deal out of it. Jeez.” For the record, I used bagged Idaho potatoes from the Regular People Aisle at our local chain grocery. I don’t think they had a pedigree other than that.

As to the frying medium, I used fresh Crisco vegetable shortening. Vegetable oil would also work well. For more on deep fat frying, I refer the gentle reader to my notes in Part 1 of this series.

Can you use this to make something nice from leftover mashed potatoes? I suppose you could, if you hadn’t flavored them with anything other than salt. If you decided to make potato doughnuts with the remains of last night’s garlic-and-onion mashed potatoes, please do not invite me to your porch breakfast.

The Verdict from the Panel of Husbands

None of the husbands could taste even a hint of potato, which was a relief. One fellow said they were “needlessly sweet,” but I say you’re going to get one of those in every crowd. Three commented on how surprisingly light and crunchy they were–with two comparing them favorably to waffles and ice cream cones.

I was curious about how well they’d keep, so the morning after the tasting (having put them under foil in a bowl in the kitchen, leaving a little gap in the seal for ventilation) I got up and ate the remaining dozen–cold–all by myself. 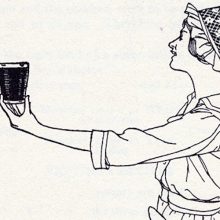 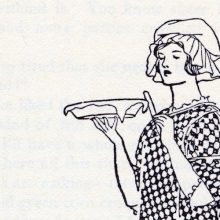 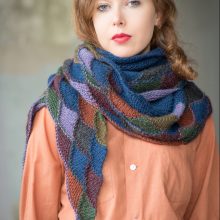