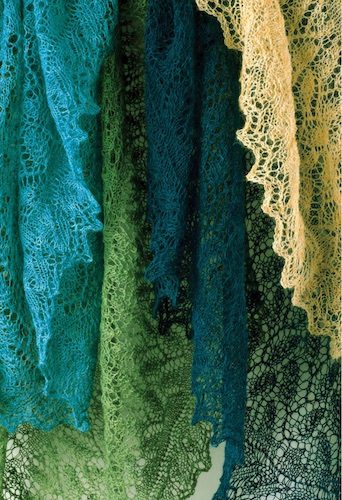 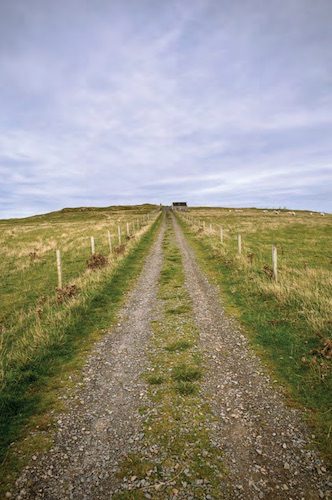 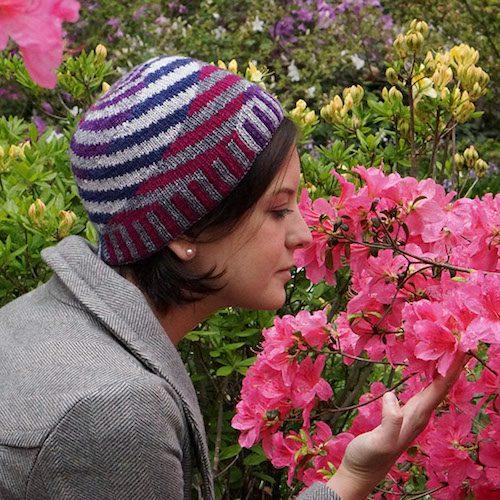 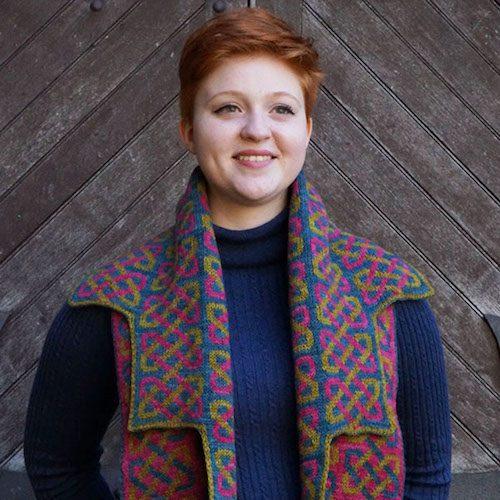 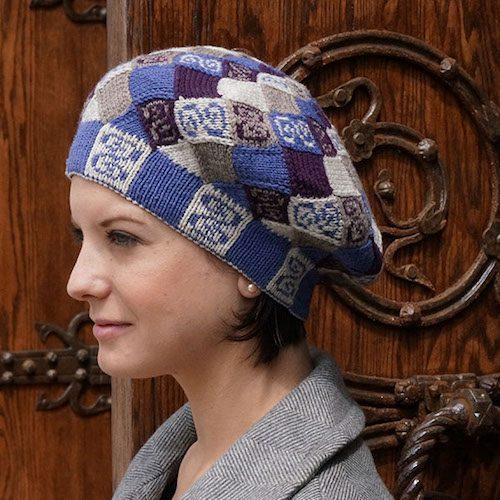 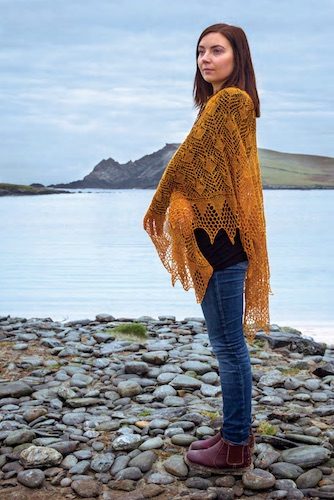 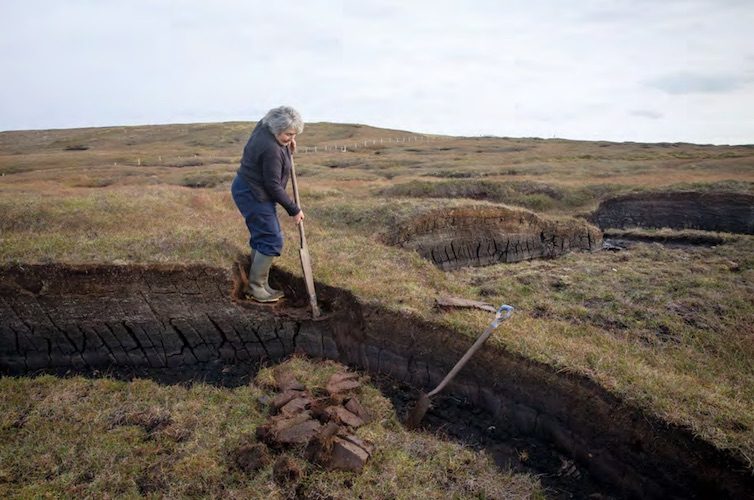 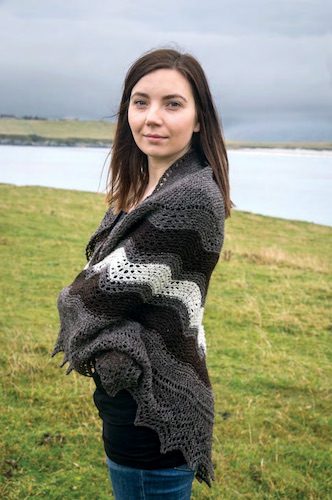 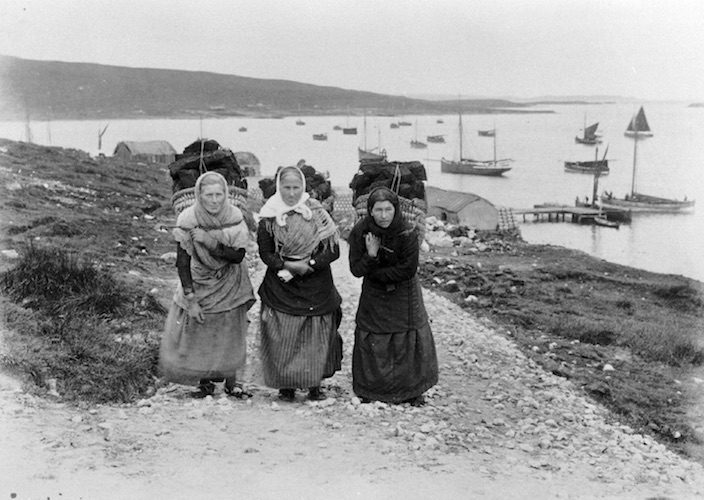 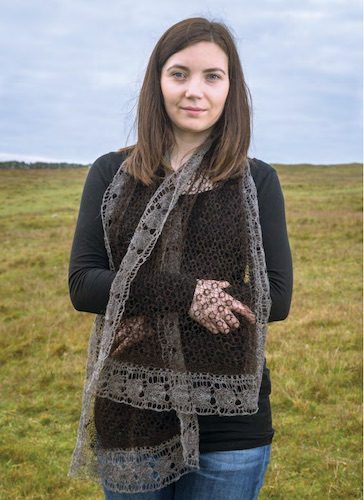 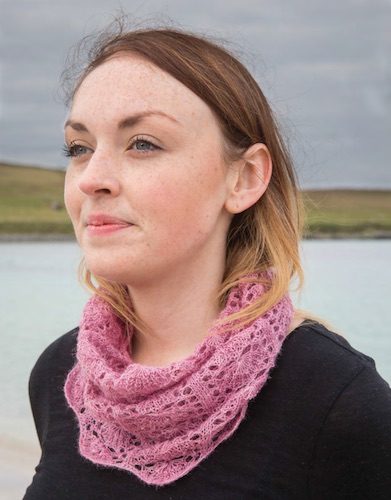 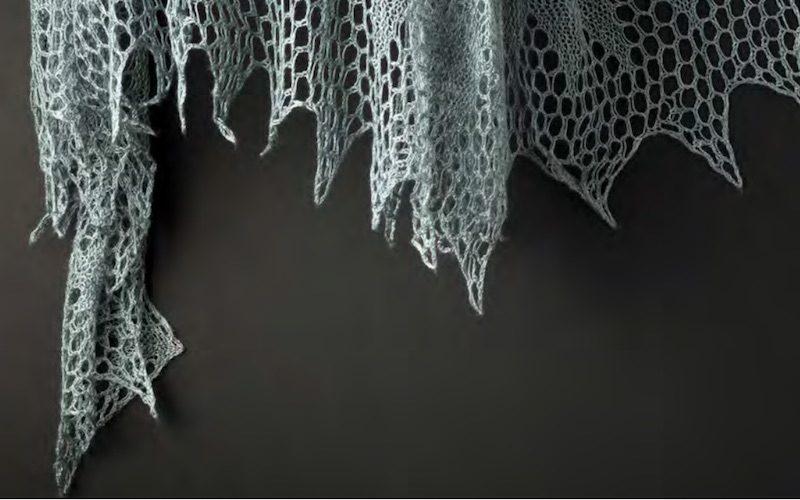 21 Comments
Home » Inspiration » Books » Franklin Habit on Books: How Far Will You Go?

Franklin Habit on Books: How Far Will You Go?

When Alasdair Post-Quinn’s Extreme Double-Knitting (Cooperative Press) appeared in 2011, it set off what must have been the unlikeliest knitting craze of the twenty-first century.

Now, the word “extreme” gets flung about quite a bit in the knitting world, usually for no good reason. In “extreme” sports, human beings fling themselves off cliffs and tall buildings; or push the limits of speed on land and sea. In “extreme” knitting, yarn overs become double yarn overs; or quite bulky yarns are worked with quite large needles. While knitters are not widely supposed to be adrenaline junkies, I truly doubt that any of us gasps at the prospect of lace with slightly larger holes it.

Post-Quinn’s book, on the other hand, went out of its way to justify the title. It took the already daunting technique of interlocked double-knitting—in which both faces of the two-layered, two-colored fabric are consistently attached to one another—and made it do astonishing things. 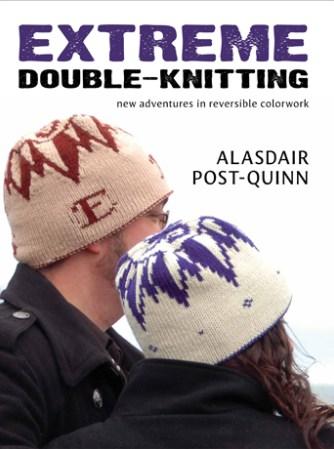 After neatly presenting the basics, it offered an efficient system for working completely different patterns on each side of the fabric. Then added shaping. Then added a third color. Then added cables. Then cables in two colors. Then cables in three colors. All these beautiful innovations remained interlocked, double-thick, and fully reversible. An appendix hinted at still further horizons, but by that point the even intrepid knitters must have been calling for oxygen.

In a community often drawn to the kwik-n-eezee, one would have expected the book to sink like a stone—admired by many, bought by few, quickly shifted to the clearance shelf. Instead, buoyed by online word of mouth, it launched dozens of knitalongs and also Post-Quinn’s career as a national teacher. It was a testament to the largely untapped market of knitters who crave not only novelties, but challenges.

Now, under the author’s own imprint of Fallingblox Designs, comes Double or Nothing: Reversible Knitting for the Adventurous. Described in the introduction as “a sequel of sorts” to Extreme Double-Knitting, it revisits some previous territory with innovations and revisions; then launches into brand-new daredevil maneuvers like double-knit intarsia, honeycomb, entrelac, and lace. 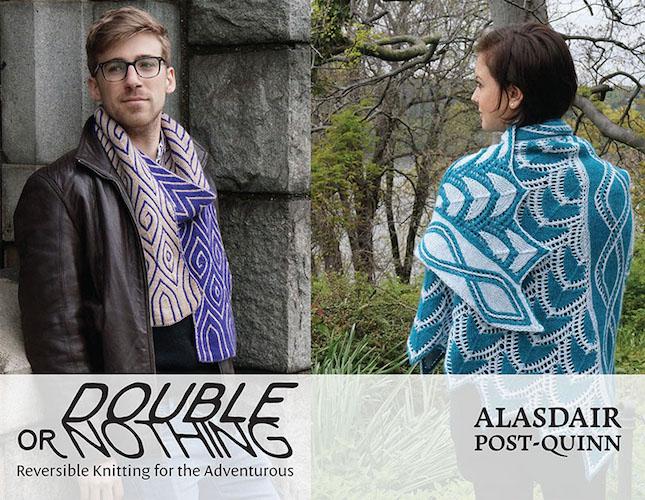 Some of this is stuff many knitters hesitate to tackle in one layer, let alone two. But when Post-Quinn puts the word “adventurous” on the cover, he isn’t kidding around.

The techniques in Double or Nothing sound complicated because they are. The author never pretends otherwise, writing with admirable candor about pitfalls, annoyances, and the inevitable goofs. Happily, he has a knack for breaking complexity into small, logical bits. Any knitter with reasonable dexterity and focus should be able to find and keep to the path. Step-by-step illustrations and annotations are lavish, and (a special thrill for hardcore technique junkies) there is extensive detail about not only how things work, but why.

Some, of course, will decide it’s all way too much; not everyone has the stomach to negotiate a dozen paragraphs of rumination on creating neat selvedges. But even pure product knitters might be tempted by the patterns.

The finest of these—they’re all for accessories—play to double-knitting’s special strength: bold motifs that defy the usual restrictions of their single-layer counterparts. The jazzy, fresh geometry of the Kontinuum Hat (an intarsia spiral) and the Ferronnerie Tam (in three-color entrelac) don’t look like everything else you’ve seen, because they couldn’t be knit any other way—at least not without a lot of ugly fudging on the wrong side. In Double or Nothing, there is no wrong side.

The husband-and-wife team of Denise Bell and Chris Dykes is best known as Lost City Knits, purveyors of hand-dyed yarns much prized by lace aficionados. The couple’s first joint publishing effort is Ultima Thule: Patterns Inspired by the Shetland Islands (print plus ebook edition available here; ebook-only edition here), in which travel essays by Dykes alternate with designs by Bell. 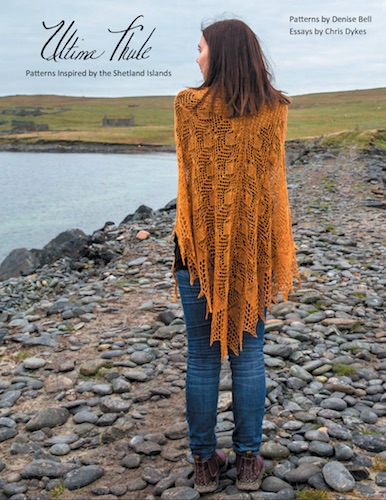 Bell’s work as the in-house designer for Lost City has probably helped to move a lot of skeins. In a crowded field, she stands out for her willingness to experiment with traditional motifs and shapings, reimagining them to suit her rustic-modern aesthetic.

Using the Shetland Islands as a point of departure for a pattern collection could be a terrible trap. For one thing, that ground has been covered so thoroughly of late that these days it’s almost all muddy footprints. For another, there is the question of who can claim to be designing “Shetland lace.” The Shetland knitters themselves are very much with us and very protective of their traditions—and rightly so. Where is the line between homage and appropriation?

Ultima Thule pulls it off by treading carefully and respectfully. Both Dykes and Bell clearly fell in love with Shetland as visitors, and this is their tribute.

Bell’s suite of five designs (three large shawls, a cowl, and a scarf) is uniformly excellent. Her command of value in lace—the tendency of open and closed areas to read as lighter or darker—is particularly strong.

This can read as bold and modern, as in the Kishie Shawl (inspired by local woven baskets), which suspends a repeating motif in a sea of netting. 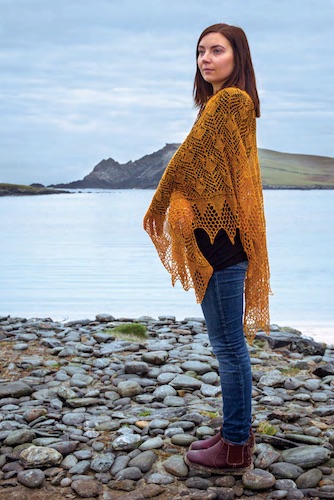 It can also, as in the circular Kailyard Shawl, lend a pulsating energy to the alternating concentric bands—even when the piece has been worked in a solid color. 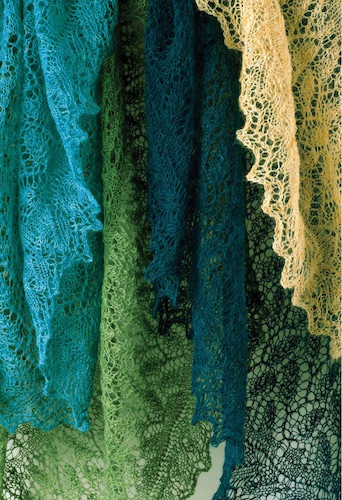 For those who prefer to work on a smaller scale, the delicate Voe Cowl is notable as that rarest of rareties—a one-skein project worth knitting. It combines a fine gauge (Jamieson and Smith Shetland cobweb being one suggested yarn) with a cockleshell motif that makes clever use of gathered stitches, a pleasant departure from the usual round of yarn over, knit two together. 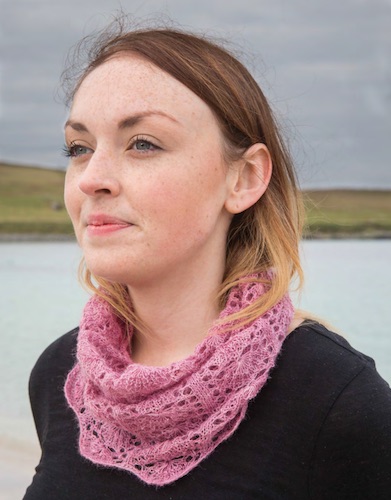 Where hallmarks of Shetland knitting appear—be they stitch patterns or shapings—Bell is careful to give due credit and, what’s more, to give them her own spin. There’s no dull copying here, no laziness. “Inspired by Shetland” turns out, for once, to be an apt choice of words.

Dykes’ contribution—essays, handsomely illustrated with his own photographs—may, I fear, be overlooked by those who dart straight to the patterns. This is a pity, but an understandable one, as the talky bits of knitting books are so seldom worth the time it takes to read them.

That’s not the case here. Dykes records with high regard and humor his encounters with modern Shetlanders. They are a mixed bunch, not only connected to the wool trade—as you might expect—but also include a nature guide, a boat builder, and a manager at the Lerwick fish market. There is a wonderful and welcome sense of them as real people—not the quaint, picture-postcard, trapped-in-amber island folk some wish them to be. (The oil industry and its effects on local life—for good and ill—is a frequent topic of conversation.) 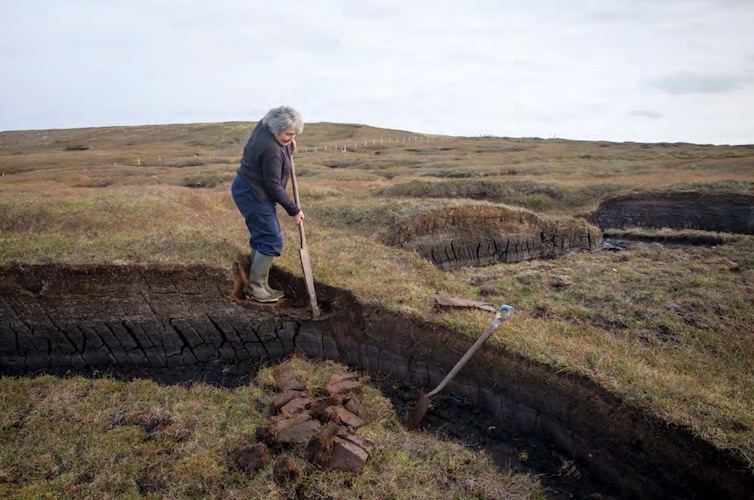 And of course—inevitably—there are sketches of the physical landscape. It would be unfair to expect anyone to write about Shetland and ignore the sea and sky, but this often brings out the bad teenage poet in otherwise steady writers. Dykes keeps a firm grip on his pen, with a generous touch of Hemingway. Here, he and Bell enjoy a nature tour via kayak:

As we paddle along, the calm waters become a little more active. At first we could have been on a lake at home, but now we’re aware that we are on big, big water, and it’s alive. The swells are perhaps four feet tall. We rise and fall with ease because the kayaks are made for this. On shore, though, waves crash into rock. We steer clear of the breaks. Angus points to the southwest. “Next land … Florida.”

The tone is impressed, but not gushy—the perfect match for Bell’s affectionate, but not idolatrous, designs. No wonder the Shetlanders took to them.

Instead of Resolutions, Just a Word
88

How To
Announcing: A Year of Techniques!
46

How To
A Year of Techniques: Helical Stripes!
32 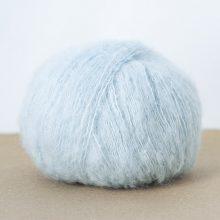 How To
A Year of Techniques: Heel Turn! 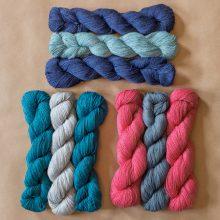 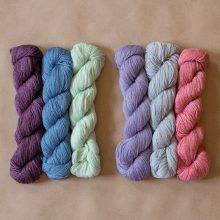 How To
A Year of Techniques: Provisional Cast On!