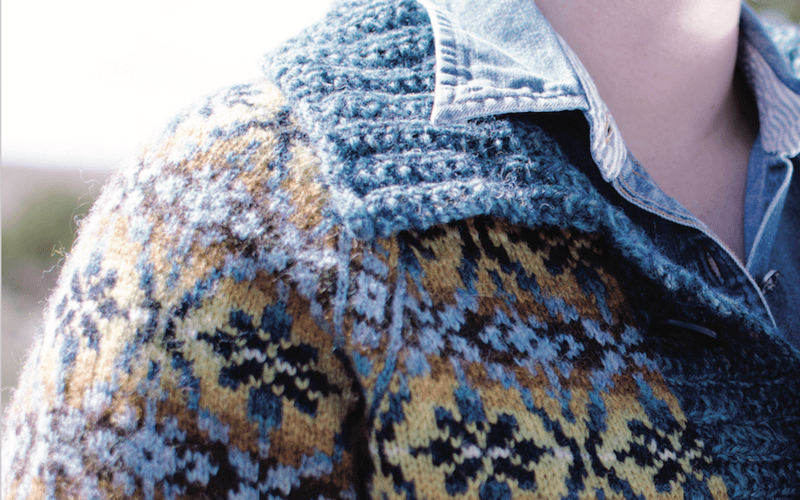 Like it or not, self-publishing within the knitting world is here to stay. The days of a small clutch of publishers deciding who’s in or out are gone forever—anyone can become a designer, and sometimes it feels like everyone has.

On the other hand, self-publishing’s lack of gatekeepers, focus groups, and marketing departments means that from time to time a passionate author with a singular vision succeeds in committing her ideas to the page without interference, and that’s cause for celebration. This month, I’m celebrating the arrival of The Joy of Color: Fair Isle Knitting Your Way by Janine Bajus.

Bajus could probably have thrown in her lot with a big publisher. She has the bona fides. Her fans (to whom she is known as “the Feral Knitter,” thanks to her website) are many and vocal, her voice is unique, and her teaching is famously good—just try getting a spot in one of her multi-day workshops.

Those workshops are at the heart of The Joy of Color. It sets out with warmth, clarity, and humor Bajus’s method for designing the style of color work made famous by the Shetland knitters of Fair Isle, which gave the technique its name.

What Makes Fair Isle So Distinctive?

Fair Isle knitting has a reputation for complexity that can make even experienced knitters quake in their socks. Mind you, the knitting itself—the handling of the yarn and the working of the stitches—is pretty straightforward. Like most forms of needlework originally developed by hard-working people with very little spare time, it’s the sort of thing you can do when you’re also keeping one eye on the baby or the stove. 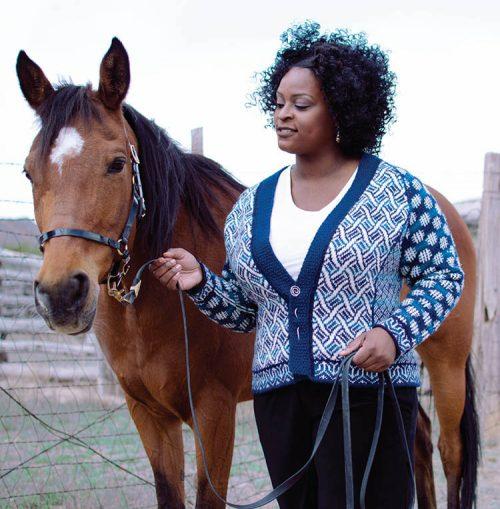 The complexity arises from the use of color, which is unlike any seen elsewhere in the knitting world. Stranded work, by nature, requires at least two different colored yarns in every round: one forming the motif, the other the background. Most styles of stranding either use the same two colors throughout, or change one or the other as the piece moves from section to section or band to band.

Fair Isle, however, requires frequent color changes—sometimes in every round. Both the foreground and background move constantly through gradients of related shades, which gives the fabric its fascinating and characteristic shimmer. Care must be taken to ensure that all the colors harmonize, that they blend smoothly from round to round, and that they maintain at all times the proper distinction between ground and motif. If a piece fails in any of these respects, it will likely fail altogether.

It’s a wonder anyone would try to do it all, frankly—except that when it works, there’s nothing in the world more gorgeous.

Stitch by Stitch, Row by Row

For those who dare—the book is dedicated to “every knitter who has said, ‘I wish I could do that’”—Bajus offers a guide to the path she blazed, often painfully, for herself. She admits in the introduction that she was neither a knitting nor a color prodigy, and throughout the book is refreshingly willing to show projects (including her first, a vest) that didn’t quite come out as she’d planned, or that went off the rails more than once on the way to completion.

As you’d expect, the structure of the book follows the logical evolution of a project. How to pick colors, how to test colors. How to pick or design motifs, how to test motifs. How to plan the garment, how to knit the garment, how to finish the garment. The broad and the fine details are here, from shaping and buttonhole spacing to the dreaded “steeks,” or cut openings. (Note that there are no patterns, as such—only two nicely designed exercises for planning your own tam or cap as a first, small-scale foray.) 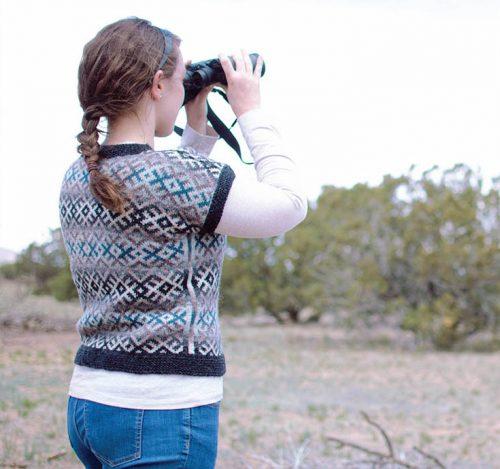 This is stuff Bajus has taught to hundreds of students, and it shows. Her explanations have the clarity and depth that come from years of fielding questions from students both brilliant and . . . not. Most sections offer multiple options for getting things done, and multiple options for fixing things that go wrong.

Indeed, her candor on the less joyous aspects of The Joy of Color is admirable, and would likely have been toned down had she chosen to submit to an editor at a major publishing house. Knitting books that sell in quantity usually try to make two points right on the cover: the projects in here won’t take you much time, and won’t make you think.

Well, this book is not about quick knitting, nor is it about easy knitting. It’s a challenge, a commitment, and it will take real work—something Bajus (to her credit) never hesitates to mention. The honesty of a section entitled “Getting It Done,” in which she dwells on the often-overlooked mental roadblocks to completing a major project, is bracing:

Sometimes we seize up because we’ve made this project about more than it is. Remember: This is just knitting! Very personal knitting that you are more invested in than, say, a plain pair of socks, but knitting nonetheless. This is about the joy of creation, the fun of self-expression. When you invest the process with too much meaning it can be hard for the reality to live up to the dream.

The proof that her methods work is sprinkled liberally throughout the book, in the form of a running gallery of finished sweaters produced by students. While these are, one feels sure, the cream of the crop, they are numerous and varied enough to encourage the timid to go ahead and dig in—not one is a clunker, and a few may have matched, if not surpassed, the master. If they can do it, so can you.

If you want to put in the work, of course.