It was knitted characters from a television show–Daleks from Dr. Who–that first brought Lisa Whiting and Lucia Blanchet together.

At the time, Lisa was the proprietor of Sifu Design Studio and Fine Yarns in Chicago. Lucia walked into the shop one day because she spied Lisa’s knitted Daleks, and mentioned that she’d made them, too. With that, the design team Lisa Lucia was born.

Lisa Lucia’s relationship with Gilmore Girls started in much the same way. The show’s costume designer, Brenda Maben, also frequented Lisa’s shop. Brenda was working on Bunheads, a television show about ballet dancers, and hired Lisa to knit a pair of leg warmers. 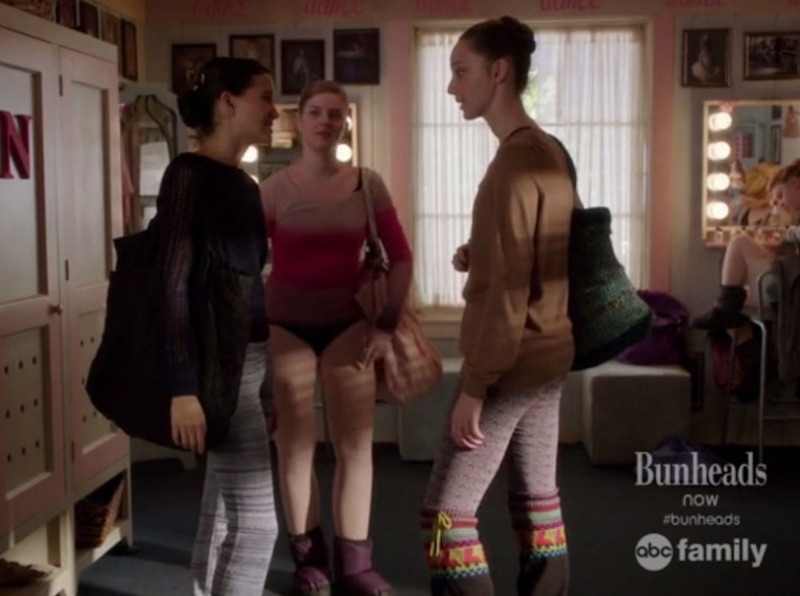 “When Brenda told us about Gilmore Girls coming back and asked if we would be interested in designing pieces for the show, we jumped,” Lisa says. “I have to admit that I wasn’t a regular watcher of Gilmore Girls, but Lucia is a huge fan. I think she screamed and did a little bunny hop when I told her that Brenda had invited us to design. We obviously said yes. YES, a thousand times yes!”

Brenda flipped through the designers’ portfolio and picked six pieces. Some were created specifically for the show, like the Dots & Dashes scarf, and the Jumbo Coffee sweater that Lane Kim wears in the Winter episode in Gilmore Girls: A Year in the Life, the four-part revival series released in November 2016.  Some were designs that had been simmering on a back burner, like Eponymuff, which started as a cardigan idea for a knitting magazine, inspired by a vision of a gender bent Hugh Hefner. There were also store samples from the now-closed Sifu that warmed extras during the Winter episode’s shooting.

“But there are three other sweaters out there that ended up just being a part of Warner Brothers’ permanent collection,” Lucia says. “So maybe they will make it on a different show? We still imagine them hanging in Lorelai’s closet, even if they didn’t show up on screen.” 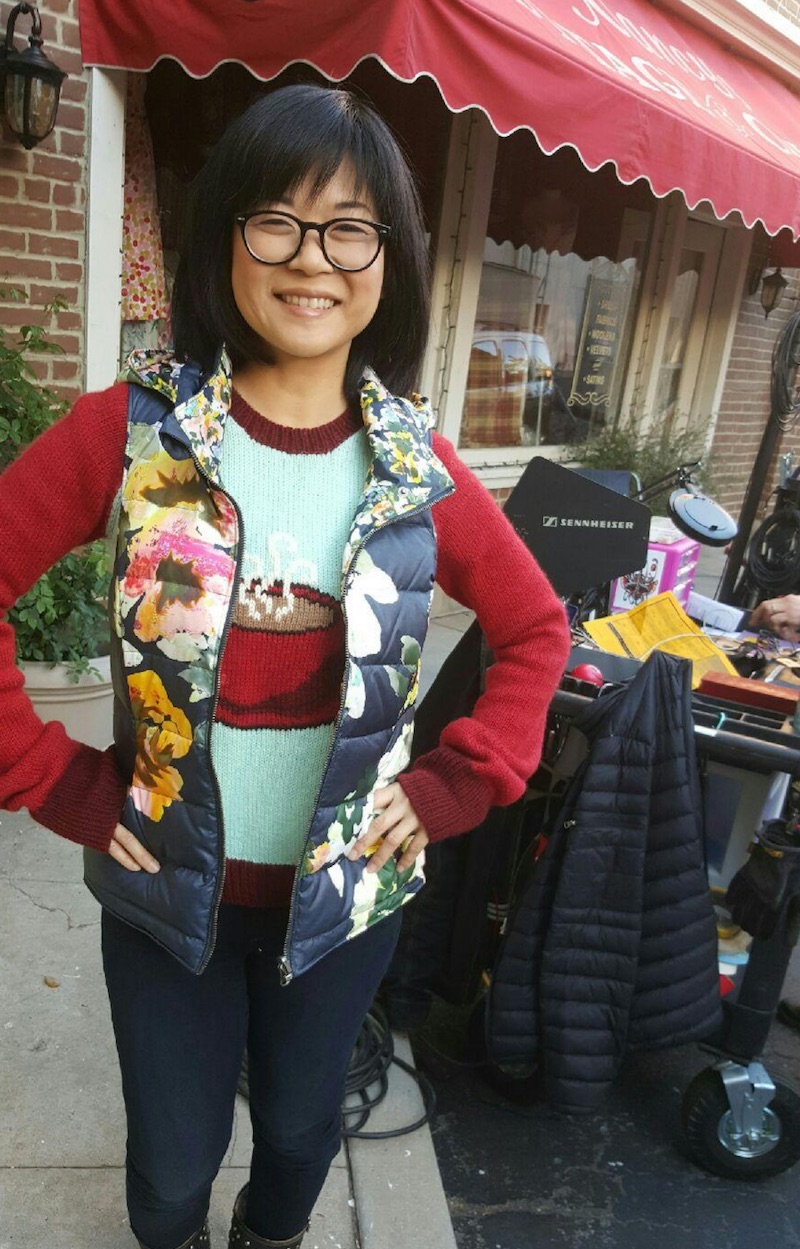 (Keiko Ageno, as Lane Kim, in Lisa Lucia’s Jumbo Coffee pullover on the set of Gilmore Girls: A Year in the Life.)

These sweaters will, however, show up as knitting patterns in the New Year, Lucia explains. (One of them, Split Infinitive, is already available on Ravelry.  Jumbo Coffee is coming soon.) 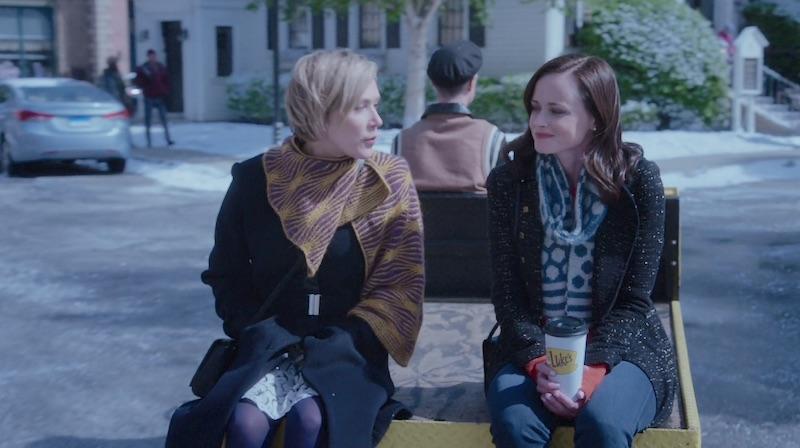 The stars of the show know their knitwear. The first time Lisa met Liza Weil, who plays Paris Geller (on the left, wearing Eponymuff, in the photo above), was a little awkward. As Lisa recounts, “I gasped because she was wearing our scarf. She saw me, mouth gaping wide open and pointing, then gave me a smile and nod. I turned beet red because I was embarrassed thinking I seemed like a crazed fangirl. Later Brenda told me that she was acknowledging me as the designer. I was bowled over. Paris acknowledged me. WOW.”

“And the day before that,” Lucia adds, “we were sitting on set knitting, as you do, when Alexis Bledel (who plays Rory Gilmore, on the right in the photo above, wearing Dots & Dashes, in the photo above) came up to us and asked if she could take a picture of us to send to her mom, who is also a knitter. That was crazy and sweet. And I think goes to show the warm relationship Brenda has with the cast and crew, since Alexis wasn’t the only person to come up to us and say, ‘Are you guys Brenda’s knitting friends?’” 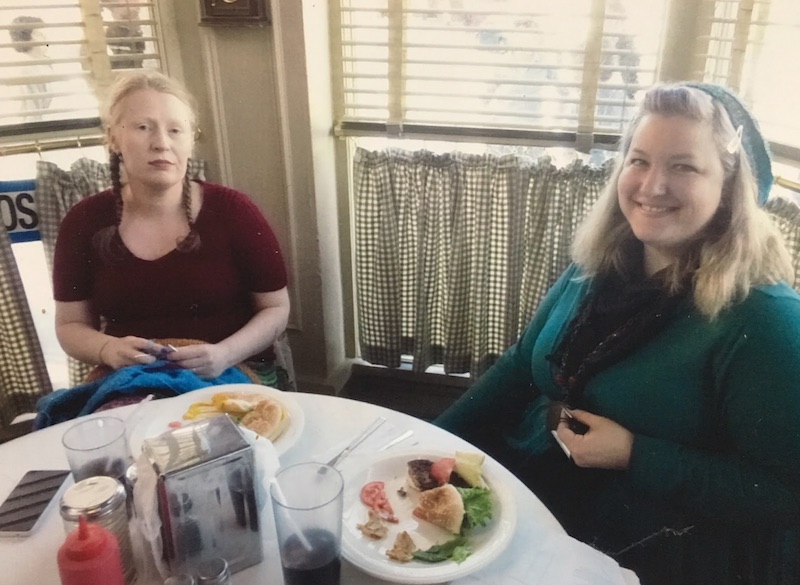 Lucia (left) and Lisa (Right): Knitting on set, as you do.

Lucia’s biggest kick, however, might have been tours of the sets.

“I really loved peeking at all the little details that make those spaces seem lived in. In particular, I got a kick out of seeing Lorelai’s antique sewing machine and a half-finished knitting project stuffed onto a shelf. The random things that they put in the cabinets that may or may not even be opened all the way – stuff like that,” Lucia says.

Patterns for both Dots & Dashes and Eponymuff are available on Ravelry. Yarn kits and both patterns are also available at Lisa Lucia’s website.

Now that their Gilmore knits are out in the world, the duo is focusing on other projects. During the next two months, they will release a group of patterns in an expanded range of sizes and skill levels. The two hope to continue knitting for costume designers, too. A month ago, Brenda commissioned Lucia to knit an exact replica of an “out of print” Armani cable knit sweater worn by the lead character in a pilot episode that she’s been working on; the original was destroyed when the actor was performing stunts. The team hopes similar projects come their way.

Even if that doesn’t happen, Lisa Lucia’s work still hangs in Lorelai’s closet, sort of.

Fun
EastEnders: A Guide to the Epic British TV Series 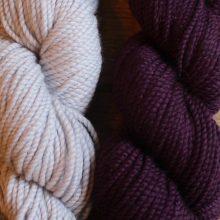 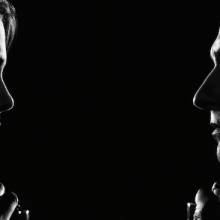 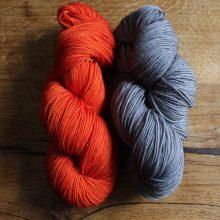 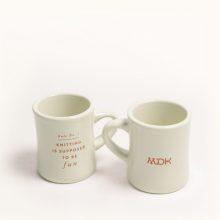