A Photographer’s Eye Turns to Knitting 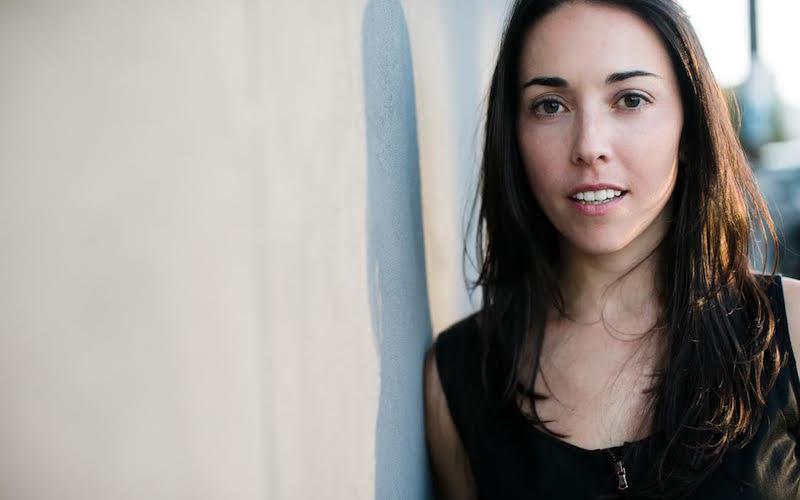 A Photographer’s Eye Turns to Knitting

Sara Remington, who created all the luscious photographs in Mason-Dixon Field Guide No. 1: Stripes, is not a knitter. “I feel slightly embarrassed,” she explains, “being part of this and not being a knitter.”

Given how much love comes through in her images, it’s hard to believe that she doesn’t have an innate passion for knitting. Instead, her passion lies in capturing light in rich, seductive detail, whether the subject is a handful of apricots or a hank of yarn.

Remington, who was nominated for a James Beard Award for her photographs in the Blue Chair Jam Cookbook, compares working with yarn to working with food. The advantage of fiber, however, is that you don’t have to rush to capture it before the moment of its perfection fades.

“With yarn, you have the luxury of not having to rush. We can tweak every little bit until we feel comfortable with our results. I’m as inspired by yarn and knitting and cloth as I am with a stack of pancakes,” Remington says.

Do Whatever You Want? Really?

With this project, Remington was encouraged to take the handwork and her camera and go in whatever direction she chose. “They said ‘do whatever you want,’ which is insane. That never happens,” she says. “It actually gets scary.”

Part of the fear comes from her work for advertisers, who have explicit briefs for exactly what they want the photos to capture. A client who promises complete freedom opens up all options. Suddenly, Remington says, “there’s no stopping point. Where does each shot stop? You could tweak it forever and ever and just keep going and try to make it more beautiful. Since they’re trusting me to be creative, I want to make something really beautiful and essential and long-lasting, rather than just getting it done.” 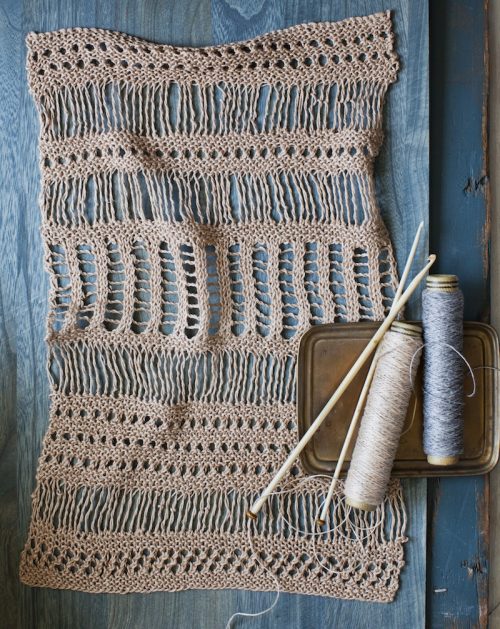 Another challenge is how interesting and inspiring she found the garments and materials she was shooting. “We could fold them. We can layer them. We can pile them on top of something else. There’s so many different ways we can arrange them—but we also had to show them in a way that the person who wants to knit it sees what she needs to see.

Everybody's getting into these 3 tasty patterns.

“Plus, the one challenge that I had is that not being a knitter means that I don’t know what not to shoot. I might find a jump in the colors really beautiful, like, ‘look at this amazing little wabi-sabi moment,’” she says. “But the knitter is like: no. That’s a mistake that no one would ever show,” she says.

This project might lead Remington to becoming a knitter, if her past behavior is any predictor. She created the photographs for Kristine Vejar’s The Modern Natural Dyer and found herself doing “a little bit” of indigo dyeing. Could a little bit of knitting be next? 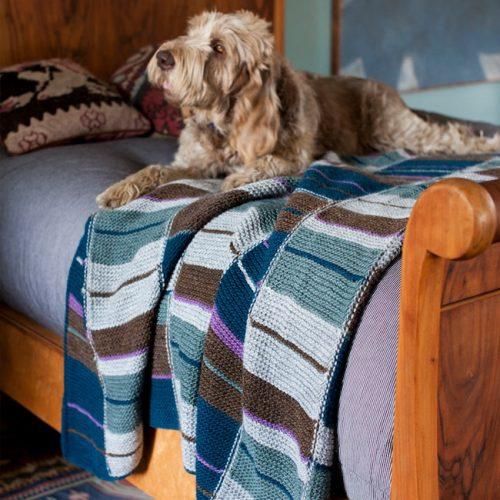 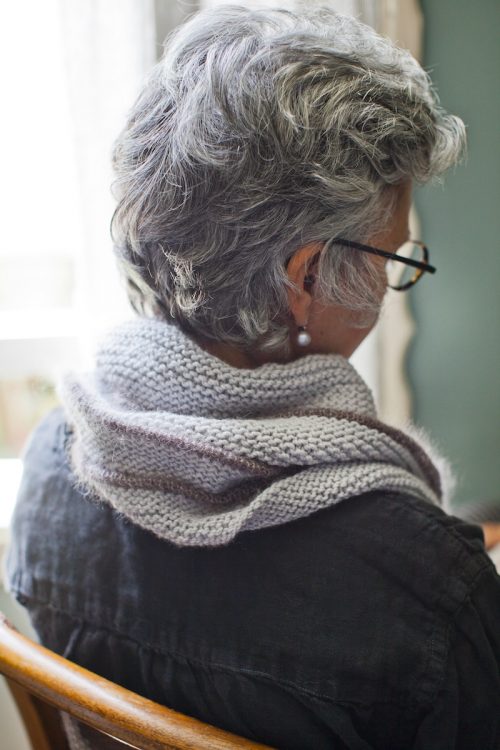 Her work is to create the backgrounds in photographs, creating an environment, a context. Mortola’s images for familiar brands feature items that pull the viewer in. For example, that white Eames-esque rocking chair isn’t just shown against a white background; instead, it is at a rakish angle near a distressed wood-and-brick wall, with a half-drunk bottle of cane sugar soda nearby, as if the person rocking just stepped out of the frame to flip the record on his turntable. 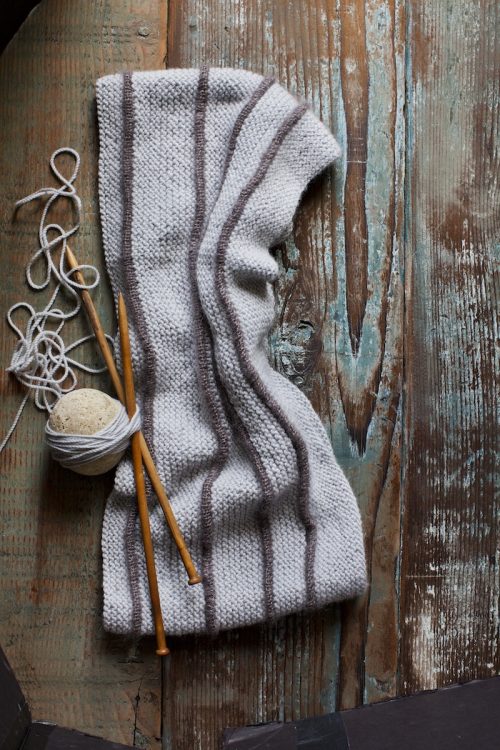 Mortola’s work, in other words, lets the viewer write the rest of the story. It’s her collection of objects and her eye for arranging them that lend context to Mason-Dixon Knitting Field Guides.

She didn’t start out as the prop whisperer. Mortola started in photography before realizing that “creating the sets and finding the things was more exciting to me than photographing them. I’m very happy I made the switch. I’ve been doing prop styling now for 16 years. I love it.”

Also featured in the upcoming Mason-Dixon Knitting Field Guide No. 2 is another of her loves: her 14-year old daughter Olivia. While Mortola was prepping the next shot of yarn rolled around wood that the mother-daughter pair had gathered near their San Francisco house, Olivia was modeling on the family’s upstairs daybed.

Yarns hand dyed in Seattle, to make a pile of Squad Mitts.

Olivia is the family’s primary knitter. While Mortola knows how to knit, she calls her approach “more basic.” She and Olivia had just returned from “spending a fortune” at the legendary yarn shop A Verb for Keeping Warm with the makings of a sweater Olivia was planning. The pair have a knitting expert who lives across the street—and will appear in photographs for an upcoming Field Guide.

Given a choice, Mortola prefers to stage shoots in her own house. Not only are there models close at hand like her daughter and neighbor, but she is a collector of cool things. “Sooner or later,” she says, “they find a home in a project. I have collections of rocks and brass objects and paintings. There’s not one inch left on my walls for paintings. I could start on the ceiling. Collecting is my biggest joy and I love all things made by people.” 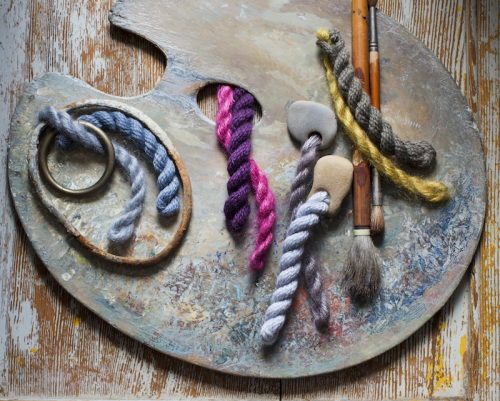 When you have so many collections to choose from, Mortola warns, you do have to be kind of careful. The props, like kudzu, can take over. Rather than approach her compositions with a more is more ethos, Mortola ponders the personality of each rock or paintbrush or moss-covered stick and tries to form marriages among them.

Acting as the matchmaker for inanimate objects is what Mortola finds fun. “When things are fun, a challenge is not really a challenge,” she says. That sense of thoughtful play can’t help but draw knitters in, even as they marvel at the textures of both the background and the finished object. 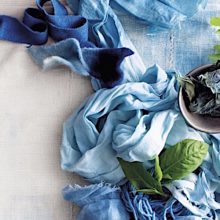 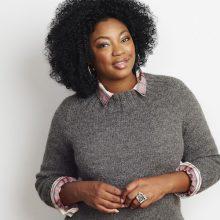 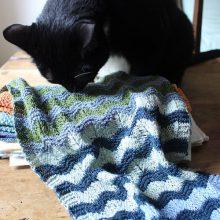 How To
Color: A Cheerful Guide for Knitters