Mittenquest: On the Hunt for Estonian Mittens 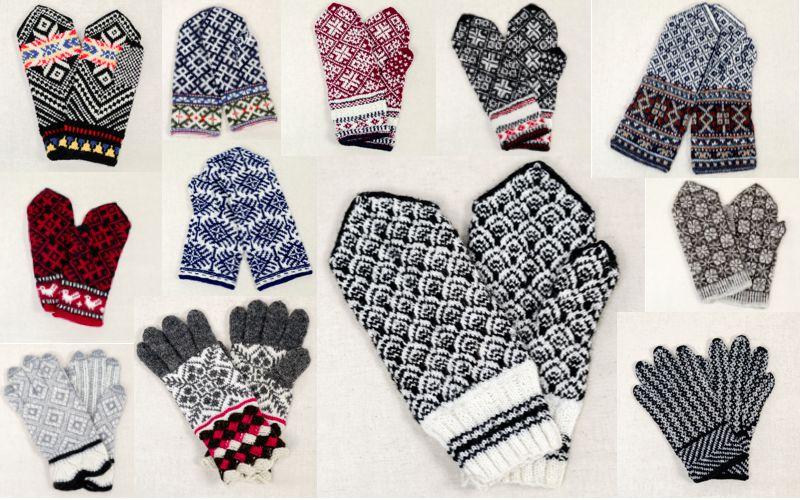 23 Comments
Home » Travel » Mittenquest: On the Hunt for Estonian Mittens

Mittenquest: On the Hunt for Estonian Mittens

Estonia in June? On a search for mittens? Count me in.

Ann’s brother Clif, also known to the interwebz as my Hubs, was an artist in residence at the Trükimuuseum (Printing Museum) in Tartu, Estonia, this past summer. 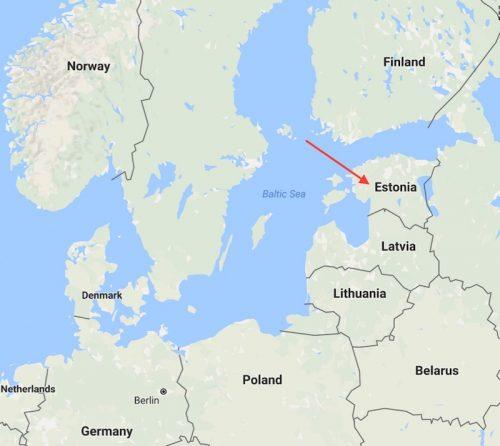 Baltic countries are not the same as Balkan countries.

He asked if I wanted to come along, and since I love traditional knitting, particularly colorwork, I thought it would be fun.

Ann and Kay were interested, too, so they gave me a task: research the best examples of traditional Estonian mittens and gloves, and then to do a bit of purchasing for Mason-Dixon Knitting. I couldn’t say “Yes!” fast enough.

I did what reading I could before going, but I have learned over our years of worldwide travel that it’s best to just get on the ground. I looked at recommendations for where to buy knitwear. There were lots of recommendations, so I made a list of stores and markets to check out.

We arrived in Tallinn, the capital of Estonia, in late June. The Old Town of Tallinn is spectacular—a lovely medieval fortified hill with stone towers, tall town walls, and twisting narrow streets. 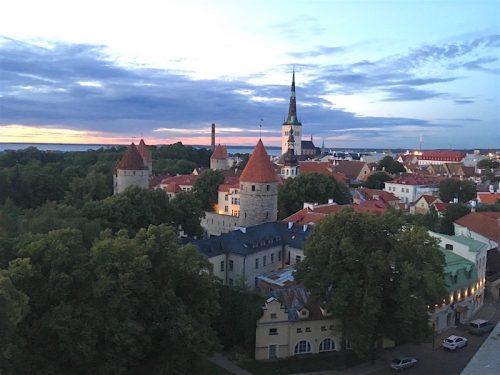 The sun sets late in summer, this far north.

If you don’t like hordes of fanny-pack–wearing cruise-ship day-trippers, just stay away from 10 to about 5. After that, the streets calm down, and it stays light until after 10 or 11. Sitting in outdoor cafes, watching people, and enjoying the long slow sunsets was glorious. We stayed for a couple of days to see the sights and do a general shopping reconnaissance, then we caught our train to Tartu, a university town about two hours to the east.

During that first recon mission, I saw lots of knitwear in shop windows, and it was lovely, but most of it was machine knitted. In particular, I was drawn to a contemporary Nordic style that looks like the floral sweaters from Oleana Knits. (Confession: I have a WIP in this style that has been marinating for at least a decade. The body is done. I just have to finish one sleeve. Lame, I know.)

But the examples I saw in various shop windows were all alike, clearly made in some central facility, and set out to attract souvenir shoppers. And that’s fine, because even if they are machine knitted, these sweaters don’t look like anything you can get here in the States, and they are very, very pretty.

However, that was not the assignment. I was on the prowl for Authenticity.

A few days later, I made a day trip back to Tallinn to dig a little deeper. I visited three shops that seemed like they would be the kind of places I was looking for: serious craft stores. The first two had leather things and wood things and some small textiles and some knitted socks, but no mittens. The third one I went to was where I struck gold.

Eesti Käsitöö (Estonian Handicrafts) at 22 Pikk Street is the shizzle. Not only is this a store, it’s also a museum and gallery for the best crafts from all over the country. During my first pass at this store, I found something so delightful. This was not just a commercial possibility, but something I really wanted for myself: kits for making mittens and gloves. 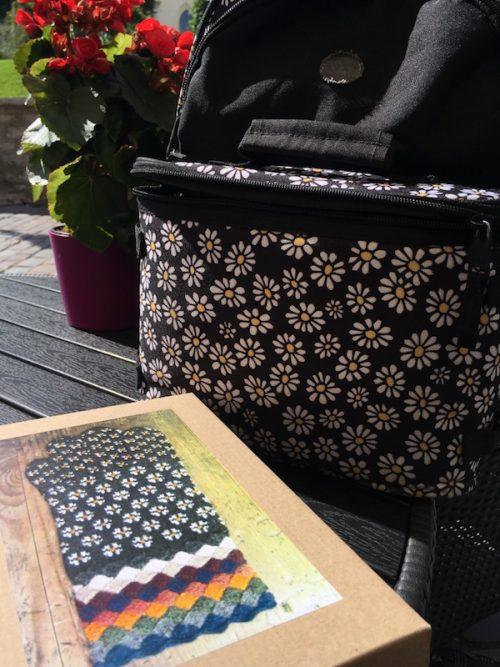 Matchy matchy! Could not believe this.

They come in lovely little boxes with color laser prints glued to the top to show the finished product. Inside are mini skeins and instructions. I was entranced, so I bought one for myself to see what it was like. (Editors’ note: we sold out of mitten kits, unfortunately!)

Our second weekend in Tartu, the town celebrated Hansa Days, a festival and market celebrating the Baltic region’s history with the Hanseatic League.

The market had a wide variety of knitted goods, most of which were machine knitted. There were two booths, however, where I found what I was looking for.

Margit Dravniece, an Estonian artist who lives in Riga, Latvia, had a booth with exquisitely knitted things. (You can meet her in this video. Estonian language alert!) She uses traditional colorwork patterns, but she makes the gloves and mittens from Merino, rather than the scratchy but sturdy wool used traditionally in Baltic countries. Her mittens are some of my favorites of all the ones I brought home. 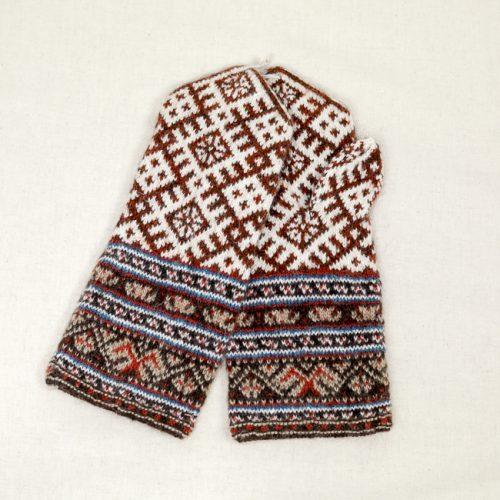 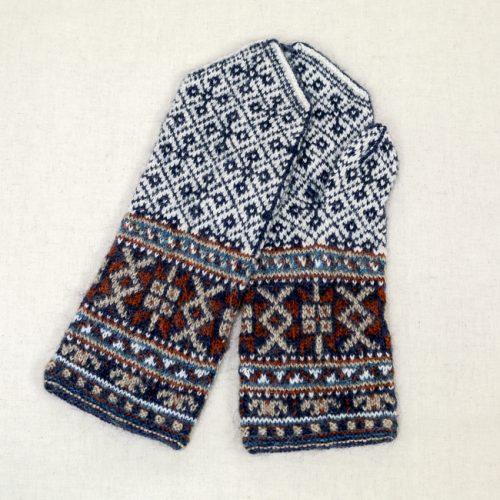 The other booth I found was manned by an older Russian woman whose mittens and gloves were less finely crafted, but they had a real homemade charm. I snatched up a few of these, too.

The next week, it was back to Tallinn for some serious acquisition. I went to the famous “Wall of Wool,” but I was disappointed with what I saw. However, when I looked at the mittens and gloves on display back at the Eesti Käsitöö, I was, as Kay says, gobsmacked. I loaded up and went to the cash register. I think I frightened the poor lady with how much I plopped onto the counter.

And this was the moment when I realized that my earlier window-shopping had paid off. My eye was now educated enough to pick out good examples of traditional Estonian knitting. I hope you will enjoy them, too! 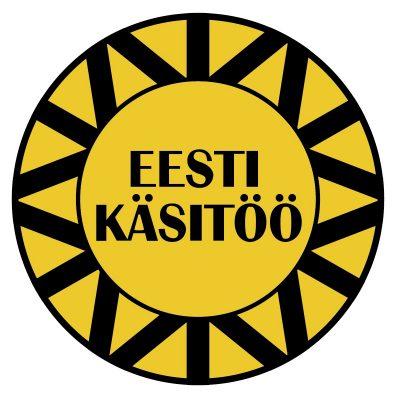 Eesti Käsitöö (Estonian Handicrafts), the beautiful store at 22 Pikk Street in Tallinn’s Old Town, is where I did most of my shopping. What took me there was the selection of beautifully made mittens and gloves, but it also sells socks, sweaters, linen garments, and wool and linen textiles. There is a selection of lovely small souvenirs as well.

The back room serves as a gallery or museum for the best crafts from all over Estonia. On my first visit, there was a exhibition of traditional folk clothing, including the amazing skirts that are woven in striped patterns particular to each village or region. I imagine this works something like Scottish tartans, in that those in the know can immediately place where the wearer is from. 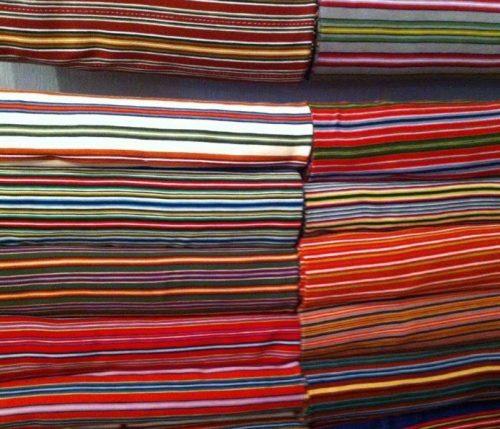 Skirt fabrics, distinctive to each region.

The next time I came, I saw a completely different kind of exhibition of contemporary indigo-dyed textiles and embroidery.

Traditional techniques are not immutable in Estonia. The mittens and gloves for sale are sometimes reproduced from examples found in the National Museum in Tartu, but there are also plenty of variations. Some knitwear, for example, features hot pink, a color that is not what I’d call traditional, although it has become a geographical marker for the island of Muhu.

The website for the store is a real treat. Google Translate produces this gem:

Home Crafts own production in the ethnically substances built sweaters, vests, stockings, socks, gloves and other.

I think that says it all.

Seriously, this place is completely awesome. 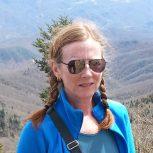 Mary Neal Meador lives and knits in Boone, North Carolina. She is a graphic designer, editor, wicked grammarian, and stalwart punctuationist. She tends to knit without a pattern, and she has been known to work Fair Isle and cables in the same yoke.