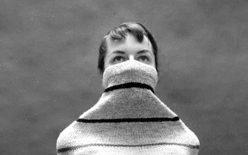 We have stripes on the brain, thanks to our work creating Mason-Dixon Knitting Field Guide No. 1: Stripes. As we searched for the world’s greatest stripes photographs, our Field Guide editor Melanie Falick showed us something that tickled us to no end. Here, we are delighted to share the story of these two photographs from the archives of the fabled Schoolhouse Press, as told by the equally fabled Meg Swansen.

Somewhere in the mid 1950s, Elizabeth Zimmermann knitted a tubular five-foot long Rugby Scarf for her husband, Arnold. (This was long before the days of Dr. Who.)

She chose pure Shetland wool in Silver Grey for the main color and added narrow stripes of alternating Scarlet, Natural Black and Moorit, she told me, “. . . to keep myself amused, and to mark my progress.”

It was neatly finished with Shetland Laceweight hems at top and bottom, and was such a handsome object that she submitted the idea to McCall’s magazine for their consideration. They accepted the proposal, and EZ mailed them the instructions, along with the scarf to be photographed.

When the scarf was returned to Elizabeth, two eight-by-ten glossies were included in the parcel. The note said that after the formal shoot, “the photographers and one of the secretaries” had some fun with Arnold’s scarf.

Henceforth, my father’s attitude toward his scarf was forever altered. 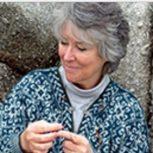