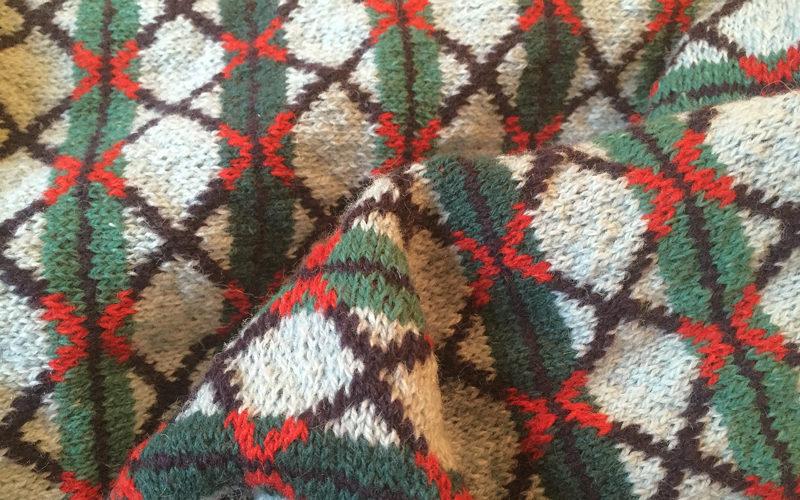 Benedict Cumberbatch has a demented legion of fans, and I like the guy. He’s a great Sherlock, and a fine codebreaker. I think. I confess I don’t remember much about The Imitation Game except a cardigan. I am quite possibly The Number-One Superfan of Keira Knightley’s Cardigan Featured in The Imitation Game.

Deliciously dowdy. Only in a movie with the most intense brainiac nerds could a cardigan like this appear foxy. She wears the thing for most of the movie. So brainy, Keira! Smart women wear cardigans.

About halfway through the movie I started calculating the pattern. By the end I knew I had to go for it. That Fair Isle pattern had to be mine.

Kimberly Harbrecht over at Knit Julep did a brilliant job decoding the knits of The Imitation Game. I found a stitch chart for Keira’s cardigan posted by a good-hearted person on Ravelry, but it was incorrect, so I won’t link to it. It did get me started, however, so I’m grateful for that.

I began this project back during the wintry, dark times, knitting in a fever with an optimistic belief that I had dug out enough skeins of Alice Starmore Campion to get me a nice, double-wrapping cowl.

Turning the cowl inside out and working the Fair Isle with the strands on the outside makes the strands a tiny bit longer. The whole thing behaves better. A narrow tube like this can be a mess if you work it with the front side out, because the strands can take a shortcut inside the tube and pull the tube too tight.

Last week, I excavated this project from the depths of my closet, in a KonMari/KayAnn Method moment. Joy! Joy sparked! I love this thing! But now I remember why I freaked out last winter and crammed this into Unfinished Object Tote Bag Zone B. There is a serious problem looming. I’m about halfway done, but there are ominously small balls of the green yarns left.

If I knit fast enough, I think I can finish before I run out.