141 Comments
Home » Letters » The Ghost in the Machine

The Ghost in the Machine

On Friday, I was due for lunch with my friend Carrington. On a number of occasions we have aimed for lunch but instead hit yard sales, which in Nashville are a never-ending opportunity to contemplate the arc of life, the human compulsion to collect pointless crap, and to negotiate the price of something from $1 to a quarter.

This time, we ate one granola bar and hit four sales in 90 minutes. It was high-density work.

Every single yard sale I have attended with Carrington involves a moment when I unearth the Craft Zone. Estate sales these days tend to involve women’s homes that have been inhabited since 1966. There are always unfinished cross stitch kits, Simplicity patterns, and a mending basket. There is usually a plastic bag filled with straight knitting needles, crochet hooks, and yarn ranging from Red Heart to Bucilla. It can be kind of great to adopt a departed lady’s Gingher scissors. But Friday was a day that really pegged the meter in my estate sale experience with Carrington.

I bought a sewing machine. 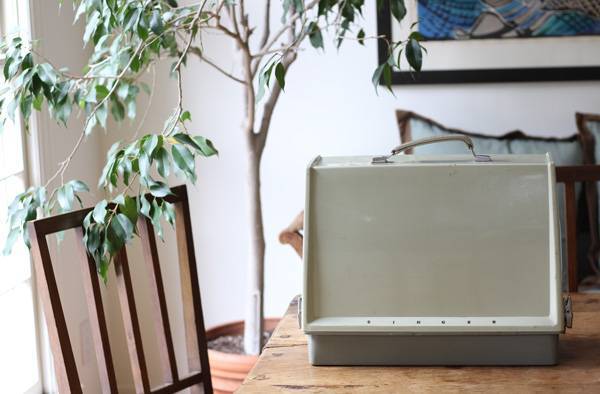 Carrington, whose crafting impulse tends toward writing, boys, chickens and her garden, had two comments: “That thing looks like a trip to the sewing machine repair shop to me.” And, seeing my crestfallen expression: “Well, plug it in.”

I removed the cover and was hit by a powerful scent I recognized: machine oil. It smelled like that old Soviet submarine we visited in Estonia. It was metal, heavy as day-old sin, and it was pale blue. 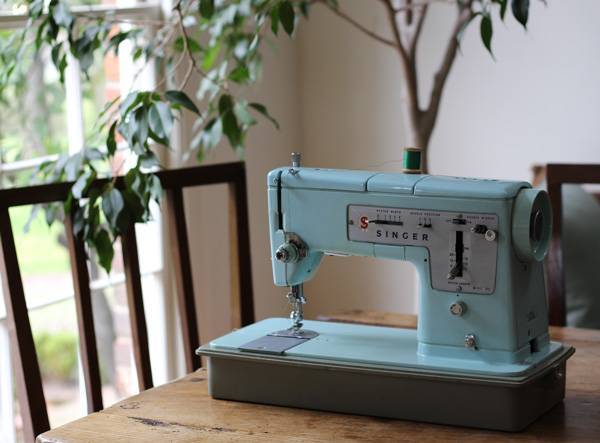 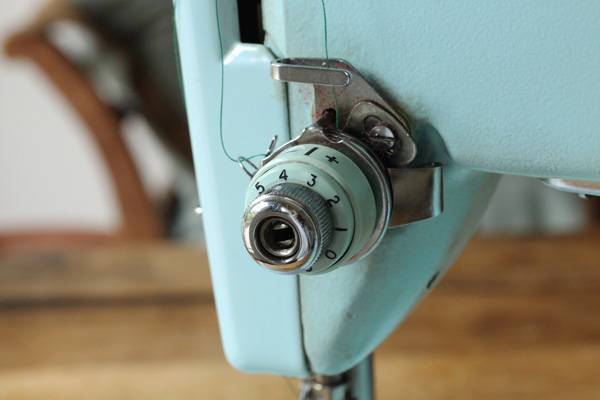 You have to understand that I have never recovered from the disappearance of my mom’s 1950s Necchi Supernova sewing machine. It looked like this: 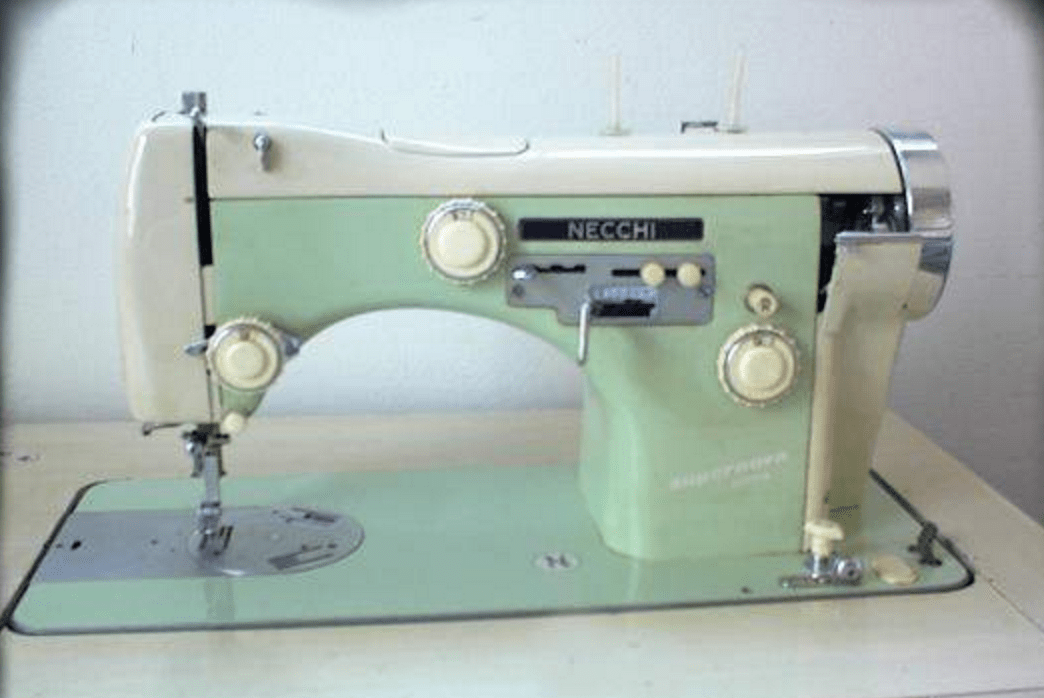 Sometime after Mom died and before I got out of college, back in the ’80s, her sewing machine vanished from my dad’s attic. As happens with many transitions, stuff gets lost along the way. I don’t have much rancor about what happened to Mom’s sewing machine, but I miss it. Phantom limb. Wish I could have learned to use it. It would have been a link to her.

Do you remember watching your mom do stuff? Mine was a spectacular seamstress, would crank a dress overnight for me, a flapper costume for my fourth-grade play, my favorite girl dresses. I played with her sewing machine and its box of strange attachments a hundred times. I pretended to sew. I raised and lowered the presser foot.

I have been thinking about buying a sewing machine for about ten years now. I’ve never used one. It’s the sort of quest that has waxed and waned, usually after seeing one of your quilts or wandering around a place like Craft South. I’d think: wow, a sewing machine looks like fun in a box. But every time I did my studying and narrowed down to a likely machine, I just couldn’t do it. They all seemed too modern, too computerized, too good.

The only sewing machine I wanted was my mom’s.

So there Carrington and I were, on the floor in a back bedroom of a vacant house in West Meade, googling “Singer Style-Mate 348,” trying to figure out if this was a thing that was worth forty bucks. Or ten bucks. Or anything at all. It was made in 1967, I learned. eBay showed one that had sold for $90. It was said to be a sturdy workhorse.

When I plugged in the sewing machine, nothing happened. Carrington found a knob that said ON, and she turned it. A small light under the machine lit up, as bright as a flashlight. I took the foot controller in my hand and pinched it. The machine made a sound I recognized from years ago: a mechanism groaning into its work. The needle chugged up and down in a plausible way, and my heart soared at this old, familiar sound. It was mechanical, kind of loud, and if there were ever a moment of memory stirred by a sound, this was a powerful one.

I didn’t even negotiate. Forty bucks.

Once I got home, I sat down with the user manual to figure out how to use the thing. 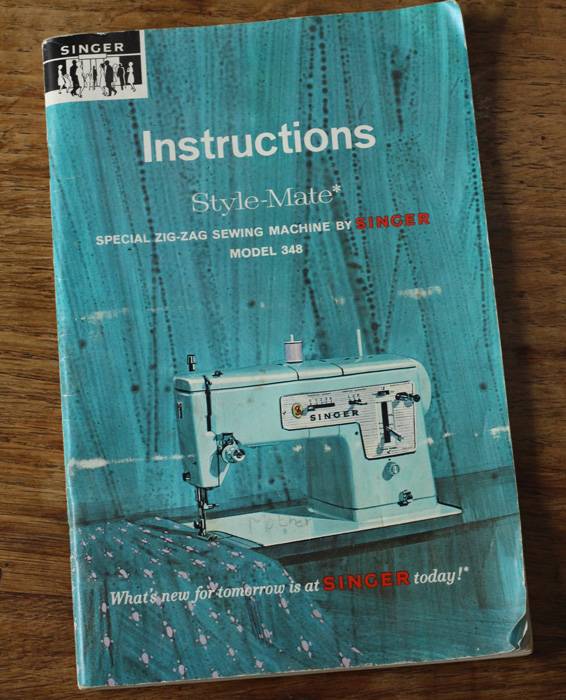 On the cover, I found this: 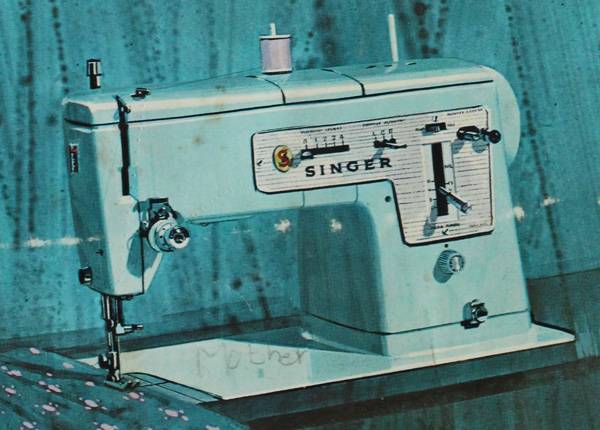 Sometime, long ago, a girl wrote “Mother” on the cover of her mom’s sewing machine guide.