59 Comments
Home » Letters » Bang Out a Sweater: The Circle of Life

Bang Out a Sweater: The Circle of Life

It has been three weeks since we waved an imaginary green flag to mark the official cast-on of Stopover sweaters for our Bang Out a Sweater Knitalong. Sweaters have been cast-on by the score, tubes joined up into sleeves and body, yokes knit on, and necks bound off.  Hardy souls among us have steeked their Stopovers into cardigans.

Many Stopovers have been finished, and many remain to be finished.  That’s OK. Knitting is supposed to be fun; we do it for focused relaxation, for the pleasure of making stuff, and to amuse and clothe our loved ones. The finished Stopovers are so beautiful, and their makers look so pleased, that they will no doubt inspire any lagging bangers to finish their sweaters in due time. (And I will be checking the Instagram hashtag for new ones, for sure.)

Some finishers have reported the hours spent on their Stopover, but most have not. The best I can reckon is that 20 hours was a very speedy Stopover, 25 hours was average, and 30 was a gentle stroll through Stopover. Life, of course, made those 20-30 hours pass in wildly varying numbers of days. Some Stopovers truly were completed in a couple of days or a long weekend, while others sat around waiting for a knitter to break free from other obligations. But no one complained about Stopover’s speediness being oversold. It’s a fast knit. Call The Lancet: we have established this as scientific fact.

Before  the official game clock for Bang Out a Sweater winds down, I’ve collected some links to help anybody who is knitting a Stopover, either now or in the future.

Yarn Strategies to Bang Out a Sweater.  The battle of the lopis: while Icelandic wool is strongly encouraged for Stopover, should it be Léttlopi or Plötulopi?

Consider the Cardigan. An alternative Stopover for the anti-pullover set, which requires scissors and the assistance of a kindly Icelander named Ragga Eiríksdóttir.

It Came From Reykjavik. Ann’s yarn finally arrives from Iceland, and she shares tips on knitting with the strange not-yarn called Plötulopi.

A Sturdy Lopi Edge. Ann lets us in on Hélène Magnusson’s tip for reinforcing a Plötulopi edge.

Bang Bang on the Door .  How to handle the three-tube situation, in which the sleeves and body must be joined up before knitting the yoke.

Armpit Edition. A tutorial on using the three-needle bind off, instead of grafting, to join inside of sleeves to body at the underarm.

The Kitchener Defense.  Ann makes the case for sucking it up and following the pattern with regard to joining up the underarm area.

And finally, the most helpful link of all: the robust Ravelry forum on Bang Out a Sweater. A person might not think there could be 1700 comments on the ins and outs of a single sweater pattern, but that person would not be a knitter. People are just getting warmed up over there.To get details on shades, modifications, and such, the Ravelry project page is a good place to start. Many thanks to all who joined in the conversation and lent their fellow knitters courage, advice, or a few yards of yarn for those bright dots of color in the yoke.

Niece Kristin, being millennial, has been enlisted to construct some fun doohickies to share the finished Stopover love. Here, wallow in the loveliness and joy: 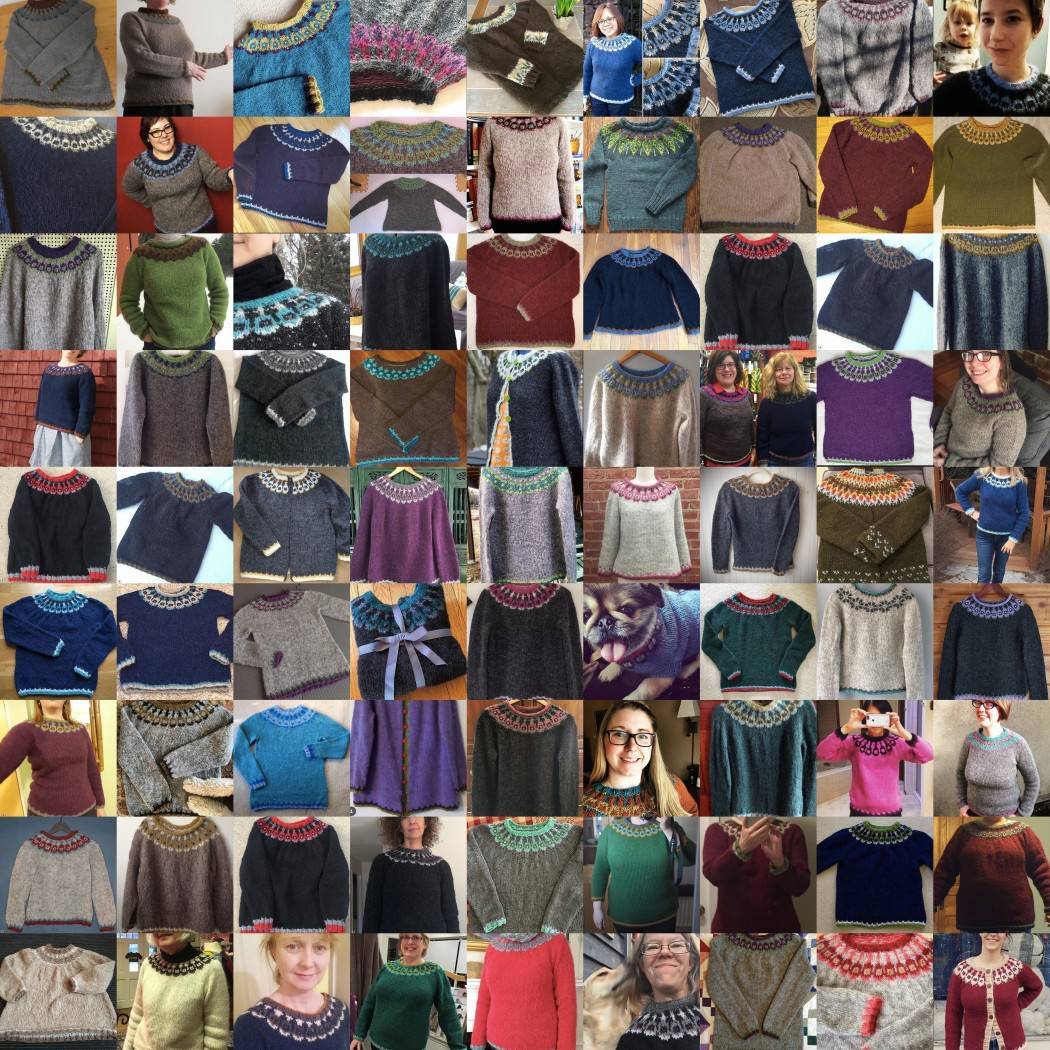 This collage is sort of like looking out at the Grand Canyon. If you want to get up in the grill of individual sweaters and virtually breathe in the Lopi, try the Flipagram:

While it was not possible to capture every image on these newfangled formats, we did our best. For more visual documentation of the variety of great knitting that has occurred, check out the #BangOutaSweater hashtag on Instagram, which currently has over 1100 images. For images of finished sweaters only, the #BangFinisher hashtag, also on Instagram, has over 150 of them. (The Ravelry forum is also rich in Stopover imagery.)

Back in January, you and I plotted this knitalong with the simple thought that Stopover is a beautiful, wearable sweater. There were no other contenders; Stopover had captured our imagination. In the post-holiday gloom of January, it seemed like it would be a grand lark to start and finish a sweater in a week or so, in time to enjoy it in late winter and early spring. We had no idea how many people would stop, drop and knit a Stopover. The response has been a wonderful midwinter surprise, so absorbing and fun.

All credit and glory goes to Mary Jane Mucklestone for designing an ingenious variation on the classic lopapeysa. Stopover is a flattering, comfortable garment and it has introduced many knitters to the joys of Icelandic wool. Prediction: many Stopover knitters will go on to make traditional lopapeysas, and they will love knitting and wearing them. Then we will all go to Iceland together, become huge Sigur Rós  fans, and eat skyr with cream and berries on top. I believe all of this will happen.

Heartfelt thanks to all who participated, whether by knitting a Stopover or just following along and putting in their two cents. We will definitely be doing something like this again.