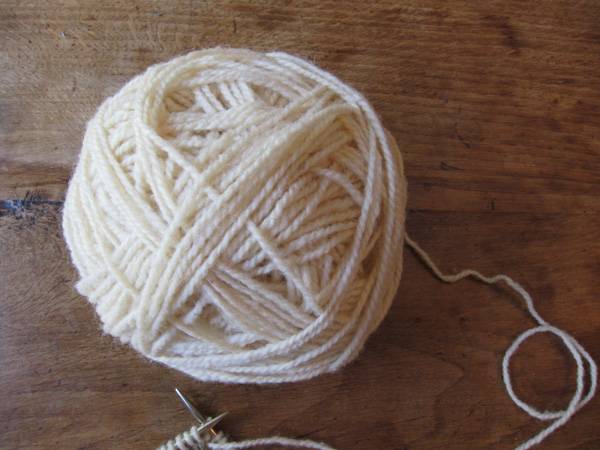 Figuring out a strategy for this eight yarns/one sweater project has cost me a surprising amount of time. I lost a crop of rutabagas in the time it took me to decide what to do with this yarn.

When I laid out all the skeins to decide how to use them in this Spinnaker sweater, it all became very clear: this group of yarns had absolutely nothing in common except a vague similarity in color.

I decided that I had to treat this project as if I were out on the great prairie, Willa Cather style, with winter coming and my resources thin. This sweater needs to come from these yarns, as fast as possible. To anybody thinking I was going to work stripes or (SU1282, I’m looking at you) intarsia, I realize is a disappointment. But the simplicity of the Spinnaker pattern (two stitch patterns) left me not wanting to muck around with it very much. There’s enough trouble brewing with all these yarns, so my thought is to blast away at the pattern and just let the colorblocks fall where they may. The biggest priority is ending up with four pieces of knitting that match the measurements in the pattern, so that they can be sewn together into one sweater that might even fit me. Everything else is gravy.

Swatching told me that a size 8 was giving me gauge when using a normal yarn. So that’s the needle to use, hell or high water. Not going to fool around with switching needle sizes midstream: Ma Ingalls would not give a rat’s ass about that. Too busy counting the seed corn.

I sorted the skeins into piles, then other piles, then back to the first piles. Color is just not something I’m going to worry about—the deep yellow of the Martha’s Vineyard yarn is an outlier amid the creamier shades. What. Ever.

I decided to put the heaviest yarns on the back of the sweater. Better to have the weight on my back, I figured, than the front. And scratchier yarns should go where they’re least likely to touch skin.

I took a deep breath, reached for the supersheepy Allen Farm corriedale, and embarked on a tubular cast on.

Kay, I know you have recently done this tubular cast-on magic trick. Isn’t it amazing? In looking at tubular cast-on instructions online (and in The Principles of Knitting), there are a number of ways to get at this gorgeous edge. The method in Veronik Avery‘s Spinnaker pattern worked beautifully for me, though it was not by any means a quick edge. It is apparently a method cooked up by designer/teacher Catherine Lowe (a juicy site, by the way), who developed it as a modified version of the traditional Italian Tubular Cast On. 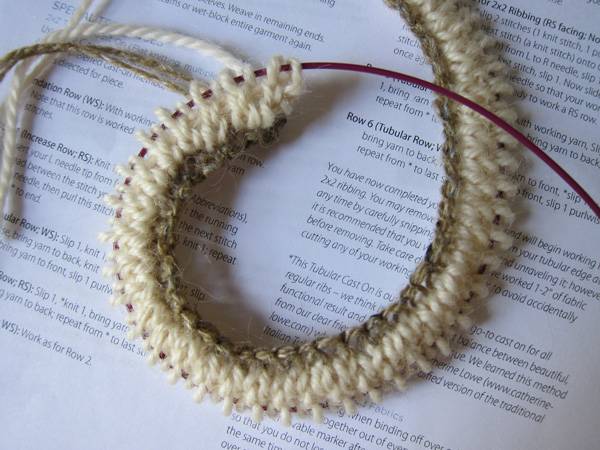 If you’ve never tried a tubular cast on, you’ll feel like a genius. Eventually. 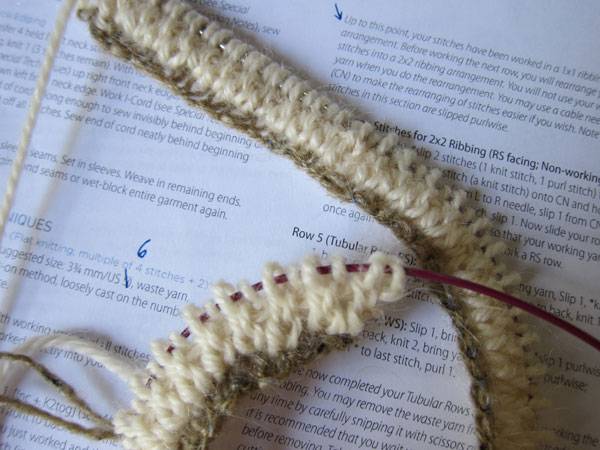 Once you remove the provisional cast on, you’re left with a tube that inexplicably curves under the edge.

An auspicious start. I guess. It only took me four tries to get it right.