Dear Ann,
I’m having that end-of-semester-and-I-haven’t-started-my-term-paper feeling. So much bloggage, unblogged. Think of this barrage of photos as a big stack of 3×5 cards about the Politburo, copied one after the other on my portable Smith-Corona typewriter with the burnt orange keys and the bad habit of spontaneously shifting into capitals. A term paper overflowing with random disconnected tidbits from the Reader’s Guide to Periodical Literature.
Seattle. We Were In Seattle.
I feel quite certain that we were in Seattle. About 8 years ago. 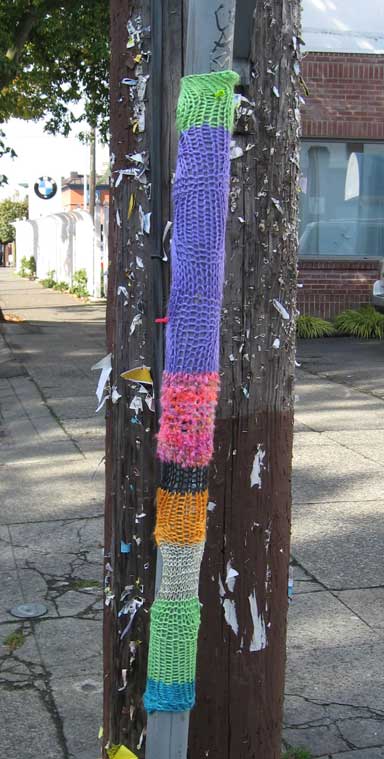 This handknit graffito was right in front of our parking space when we visited Stitch, a sweet shop that evokes ye olde General Dry Goods stores. It has an eclectic, up-to-date selection of quilting and sewing fabrics, and also yarn! And also friendliness!
Guerilla Knitting Tip 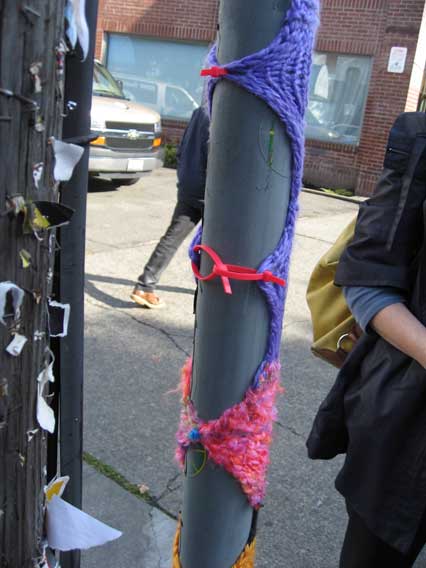 If you’re planning to tag a No Parking sign yourself, take note of the plastic ties used to hold that knitting ON. 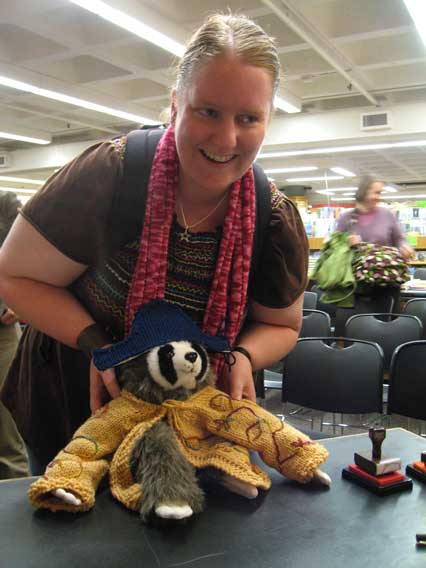 Our event at the University Bookstore was attended by Seattle’s most fun knitters, including Esteban, Jaci’s entry in Teeny Project Runway. (I am starting to hold out hope that someone will show up with one of our Taxidermy Division finalists.)

We managed to squeeze in a quick and dangerous stop at the celebrated shop Tricoter, represented here by a part of its button selection. The trunk show from Gina Wilde’s beautiful book, Shibori Knits, happened to be in residence, which meant that I got into a bit of trouble with the Alchemy Haiku. I think you lost a fight with some Handmaiden (sea-something).
New York Minutes
Thursday night found us blinking our sleepy eyes in my very own LYS, Knitty City. Surrounded by pals old and new. 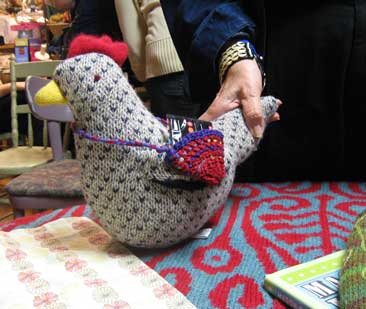 Naomi brought her Project Runway entry, which was a hen (of course) toting a condom amulet (of course). 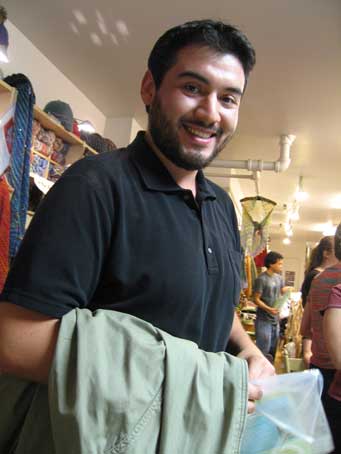 Here’s Omar, stopping in to get a book signed for his sis Zen. We try to document acts of loving kindness from siblings, spouses and children of knitters who can’t make it to an event. I get all choked up thinking about devoted non-knitters sitting through a juicy, lengthy chat about Fair Isle and top-down, just to be nice to their knitter.
Lunchtime in the Winter Garden
On Friday, knitter and teacher extraordinaire Ina Braun invited us to sit ‘n knit with a group of charity knitters at the Winter Garden in the World Financial Center. 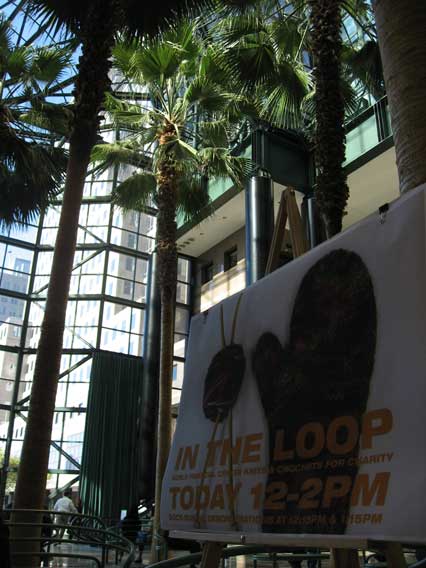 The In The Loop group couldn’t have been nicer. Everyone was knitting socks, hats and mittens for Christmas at Sea, a charity for merchant seamen. The charities vary, but the group meets regularly and always knits for a cause. If you’re in the area, sign up for their newsletter here. Ina teaches techniques that relate to the projects, currently focusing on socks. 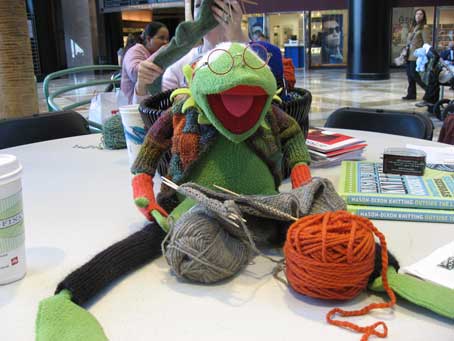 Josephina (Ina’s contribution to Teeny Project Runway) was there. We admired her in every detail, from entrelac cardi to perfectly fitted fingerless mitts. I also learned a neat trick from Ina. I was trying to knit triple stranded yarn according to a quick & thick hat pattern that called for #19 needles, but I only had #10 needles. After 10 rows or so, I could see that I was not anywhere near gauge, and my fabric was stiff as a board (big surprise). I ripped it out and went back to my non-charity knitting, thinking I had no choice. Ina told me that I could easily solve my problem by working a yarnover between every stitch on the RS, and then dropping the YOs on the WS, thus enlarging the stitches to somewhere near the gauge I would have gotten on those #19s. DUH! It seemed so obvious once she pointed it out to me, but I never would have figured it out. There is good reason to knit with others. It’s educational.
Purl Soho
Friday evening found us at Purl Soho, a mini-mecca. A dozen people, maximum, fit inside Purl, heightening the religious experience of being there. The trick was to keep everyone circulating. (I may have circulated myself a few doors down to Purl’s patchwork store. Just to make sure everything was all right in there.) 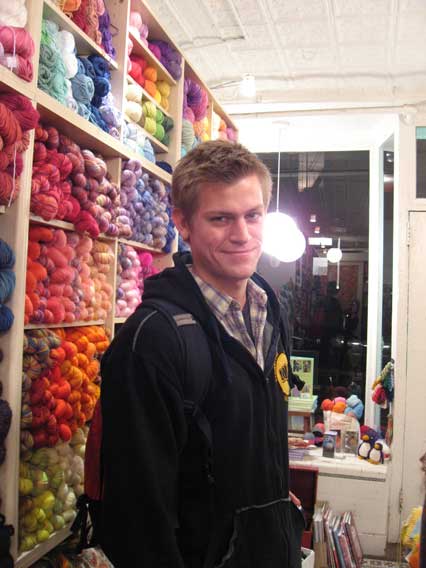 This guy came in, all sweet-like, to get his mom a book. We fell over ourselves congratulating him on his consideration and kindness and what a good–and by the way, handsome–son he was. “She called me 3 times to remind me,” he said. Way to follow instructions! Still excellent, son-wise! Purl girls Leah and Fay are lovely hostesses and we had a fab time.
Revelation: As Knitters, We Suck
What is there to say about the alternate universe called Rhinebeck aka the New York Sheep and Wool Festival? It’s sensory overload. It’s realizing that (a) you are among your people, (b) your people knit a TON, and (c) your people knit really, really well. As much as you think you knit? They knit more. One resolves to knit more, and wear more handknits, and generally try harder to earn one’s place among them. 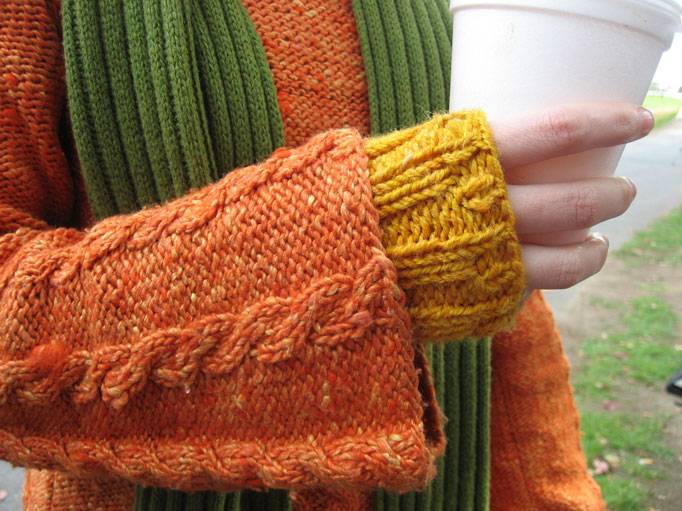 This is a day to cast aside the notion of “too many” handknits. Wear ’em all. Wear ’em proud. Wear ’em loud. (This refreshing handknit cocktail brought to you by Jenn.) 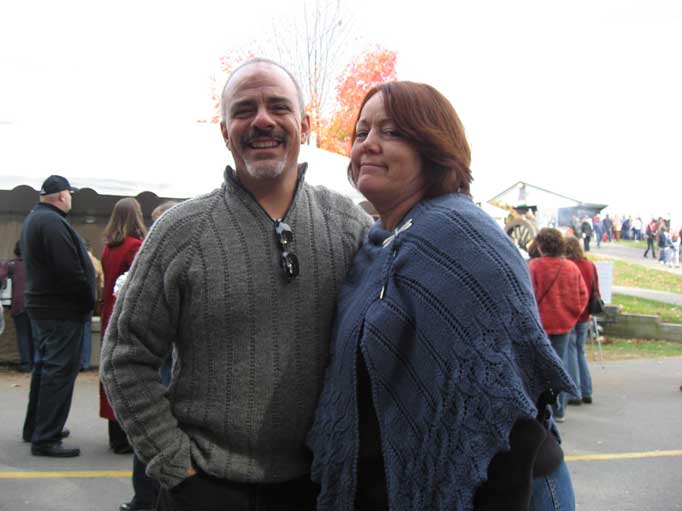 Bringing a loved one? Well…OK…but make sure he’s got a handknit on. Jeez, do we have to spell it out for you? 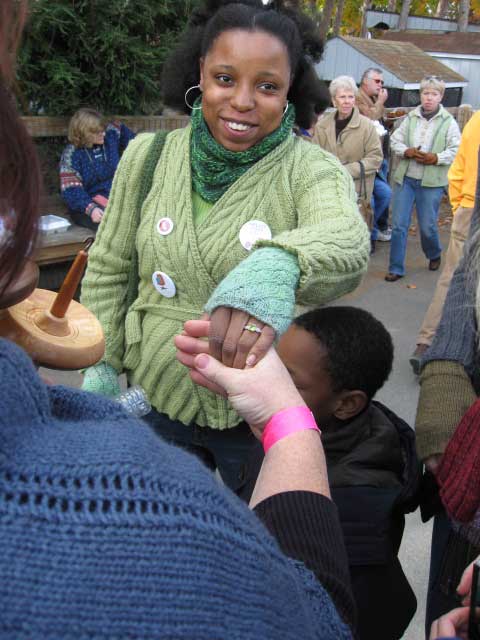 Ideally, you should be a sea of your favorite color, as Chante demonstrates. 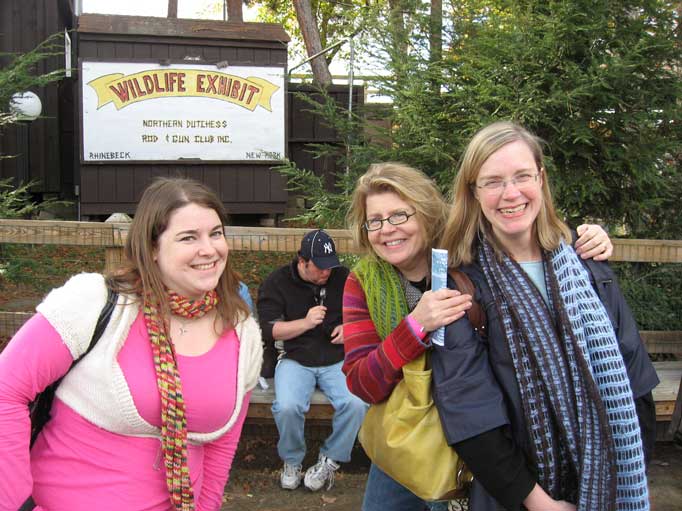 The Belinda Wrap Twins tried to hide themselves, ashamed of their low handknit density. “We’re hideous! We’re hideous!” (I would like to give special recognition to the knitter who saw my wrap and said, “Trance! And Jelly!” Trance and Jelly are the shades of Rowan Kid Silk Haze in the Belinda Wrap I was wearing.) 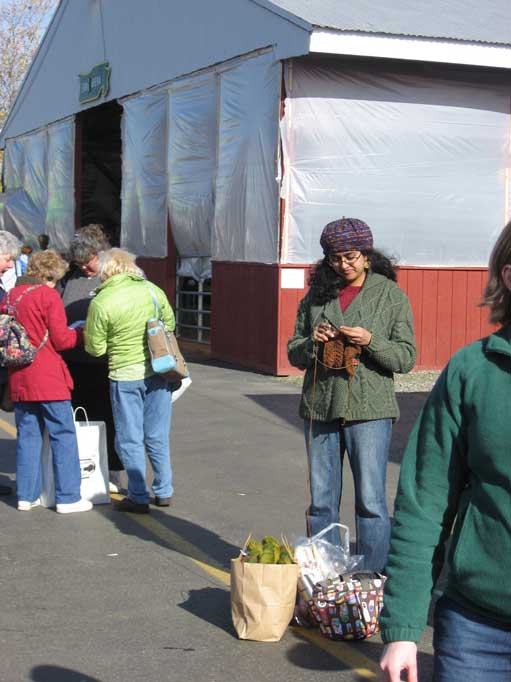 Sometimes you’d come across someone standing in the crowd, knitting. Just to take the edge off, I suppose. 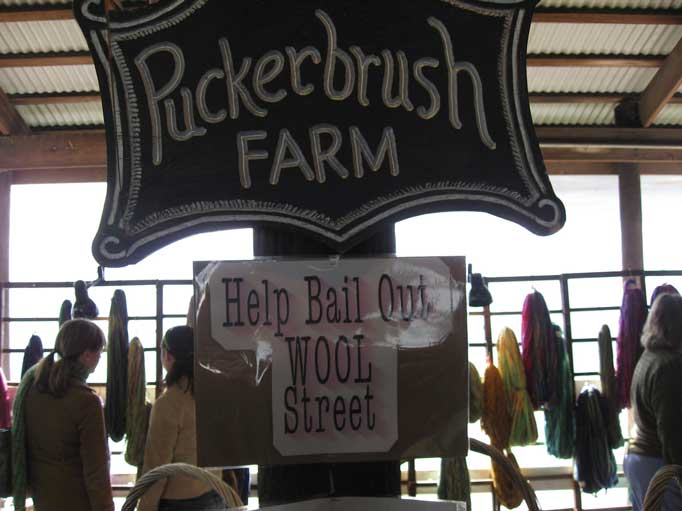 Sign of the times.
I bought no yarn. Zero. Zip. Nada. My economic stimulus package involved Fiber Arts, Other. 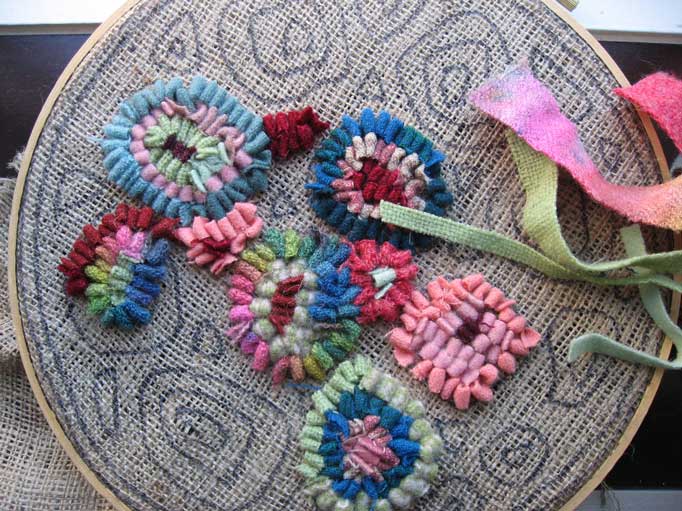 So far, the rug hooking is going a lot better for me than a past year’s sashay into Shirret. (I tried but failed to Shirret. Maybe it was the Shiraz.) I could get seriously addicted to the simple, homely craft of hooking rugs. My first project is a ruglet in the cat’s paw pattern, which reminds me of Kaffe Fassett’s Persian Poppies. I don’t know what one does with a ruglet. I don’t really care. I’m a process rugger.
Final observation: Wasn’t it crushing, when we stopped at a rest stop on the way home, and suddenly noticed that people were wearing polar fleece instead of handknits? The movie of life went from color to black & white. Why can’t the real world be more like Rhinebeck? Look at the pictures. There’s your proof: handknits make people happier and more attractive.
Ann, feel free to chime in with your photos. I’m going to go collapse in a heap now. And maybe hook a little.
Love,
Kay