Dear Ann,
Last Thursday evening, I must have dozed off for a minute or something. I blame it on low blood sugar and the balmy air of late April. When I came to, this is what I saw: 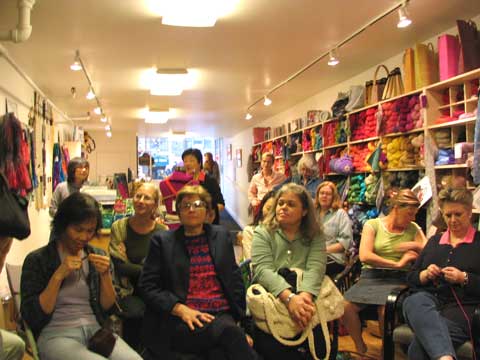 Well, that doesn’t narrow it down much, does it? What are we talking–Huntsville? Nashville? Some other Ville? Where was I?
Cool as a cucumber, I called upon my inner Double Agent to assess the situation. I looked around for clues as to my coordinates.
As a public service, and in the spirit of “You May Be a Redneck If….”, I offer the following guide for anyone who finds herself in an Unidentified Yarn Store Location.
You May Be On The Upper West Side If…. 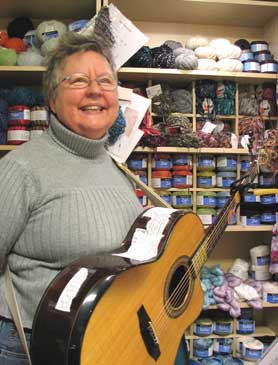 There is a lefty folk singer standing to your … well, left actually….and she sings a hilarious song (“What Was I Thinking?”) with brand new verses about the Prez (Iraq) and the Vice-Prez (recent incident involving friend who was not, as it turns out, a quail or even a bird (“My Bad!”).
In this case, the folk singer in question is the inimitable, the adorable….Christine Lavin. Yes, the Christine Lavin who wrote that song “Attainable Love” that I used to croon to Hubby (before he was Hubby, when we were just Best Friends Forever…and Ever)! The Christine Lavin who wrote a piece in Knit Lit 2! Who invites knitters to come early to her concerts to sit and knit with her!
You May Be On the Upper West Side if…. 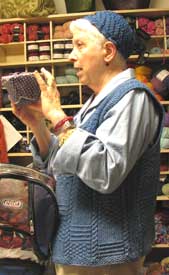 The next person who gets up to speak is a Political Activist Knitter (wearing a FANTASTIC Rowan Denim vest and beanie). This is Naomi, who wrote a piece in Knit Lit the First about a knitting project that she did to raise awareness of how to compost in your apartment using red wiggler worms. (People knit and crocheted hundreds of worms for her, and the Queens Botanical Garden hosted a three-week installation called The Dirt Museum. Knitted worms. Think about THAT.) 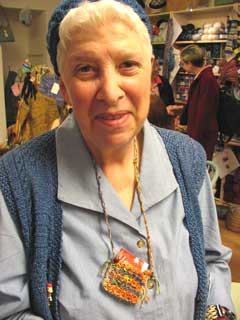 Naomi has moved on from the red worms. Her latest activist knitting project involves amulets like the one she is wearing around her neck. (Um, the one with the Trojan in it.) Naomi is raising awareness of AIDS prevention, especially as it affects the female population over age 50. If you are chatting with Naomi and you don’t get your consciousness raised, you need to get your consciousness checked out.
OK, so I didn’t need more than those 2 clues to tell me that I was home on my sweet Upper West Side. I was at Knitty City, New York’s new yarn store on West 79th Street between Amsterdam and Broadway, at a special evening of knitting and readings from the Knit Lit series. Shameless sponger that I am, I got to read at this event even though I have not contributed a single word to the Knit Lit series. I got to read your piece from Knit Lit the Third, “In Which It Is Discovered That I Am Not Ann Patchett.” Sa-weet!
Other scenes: 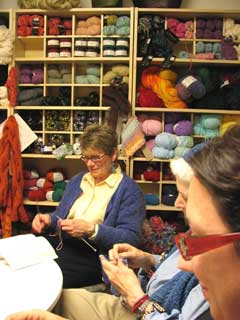 Linda Roghaar, literary agent to the stars, creator and editor of the Knit Lit series. As always, impeccably turned out in a handknit and charming the pants off of everybody. 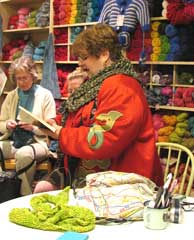 Cathy Cooper, author of the piece with the best title EVER: “Pound of Love”. Other readers were Nilda Mesa (if I needed a third clue that I was on the Upper West Side, Nilda is an artist who writes about and designs for knitting and crochet in English and Spanish), and Jenny Feldon.
Knitty City is fast becoming a local institution; it seems like it has always been here. The hello is always friendly, the yarn is bursting off of the shelves, and the events are frequent, fantastic and open to all knitters. Thanks to Pearl for hosting and Nilda for organizing!
Love,
Kay, pseudo author and Ann Shayne Impersonator (Hey I Totally Gave You The Idea For That Story)