51 Comments
Projects / In Progress / The Joy of the Finish

The Joy of the Finish

I recently had a week off, which I spent in Dillon Beach, California with family and friends. I’d never been there, so was amazed to see cows grazing so close to the ocean. The rural character of the landscape was deeply restorative; we took long drives to explore. It was divine to wake each morning in a house enveloped in thick fog, and to sit with my coffee before others got up, sipping and stitching, waiting for a clear view of the coastline and somebody to make me breakfast.

What was I stitching? Well, I was unfaithful to my main knitting projects.  The night before we left, I looked at all those little balls of linen for my True Friend sweater, and I thought, “Get real! An airplane is not going to provide good conditions for all those tangly little balls!”

I still took True Friend, of course, hoping for the best. But I had some back-up projects.

I took my all-one-color, stockinette-for-the-road project (Relax the Second), and at the last minute,  I threw in Nell’s leftovers from her Easel Sweater. By the time we landed in California, I had finished this: 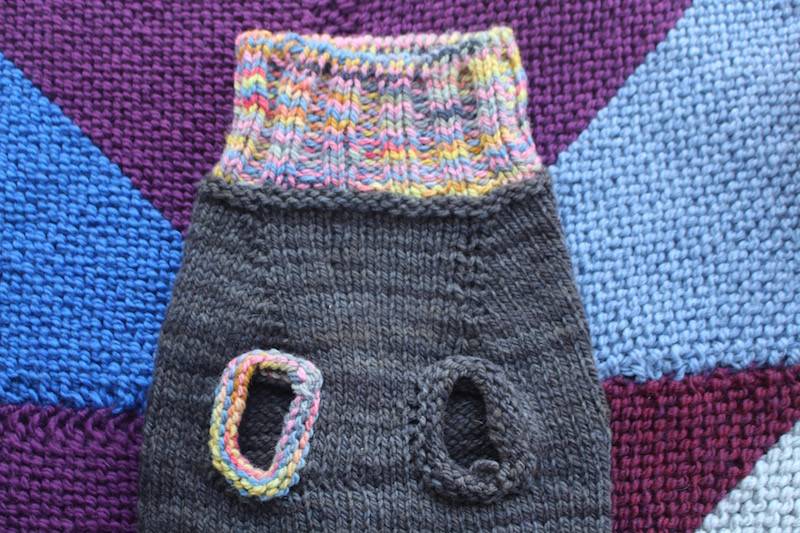 A mini-Easel Sweater for Olive, in Jill Draper’s springy New York State Cormo. (Olive prefers sweaters from sheep she can hope to meet.) The pattern is the Madeline Basic 4.5, by Corinne Niessner. I followed the instructions for size C. My nod to Easel’s asymmetrically-colorful sleeves was pretty subtle, but it was the best I could do given the lack of actual sleeves on the Madeline Basic.

The most fun part was sewing on Nell’s surplus pocket from her version of Easel. 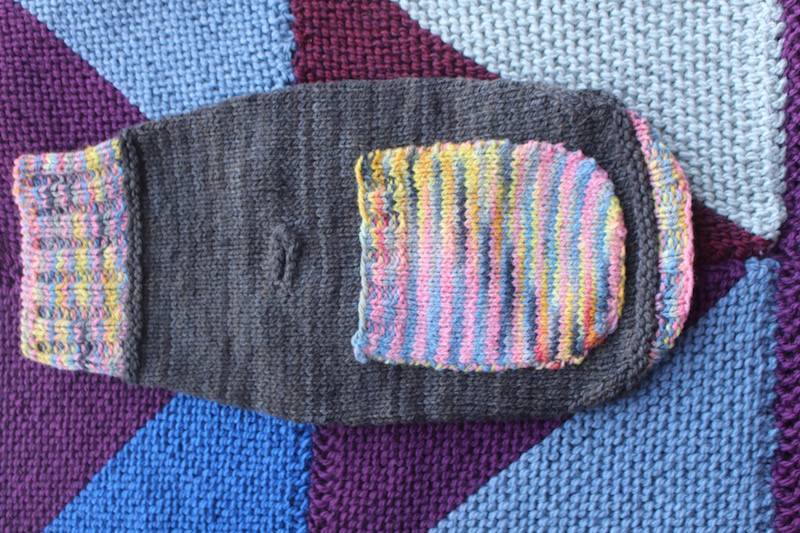 It’s very practical for carrying around one’s emergency cheese. (Actually not that practical. Poetic license.) Mainly, it’s a double thickness of warmth on Olive’s back, a pocket for joy. 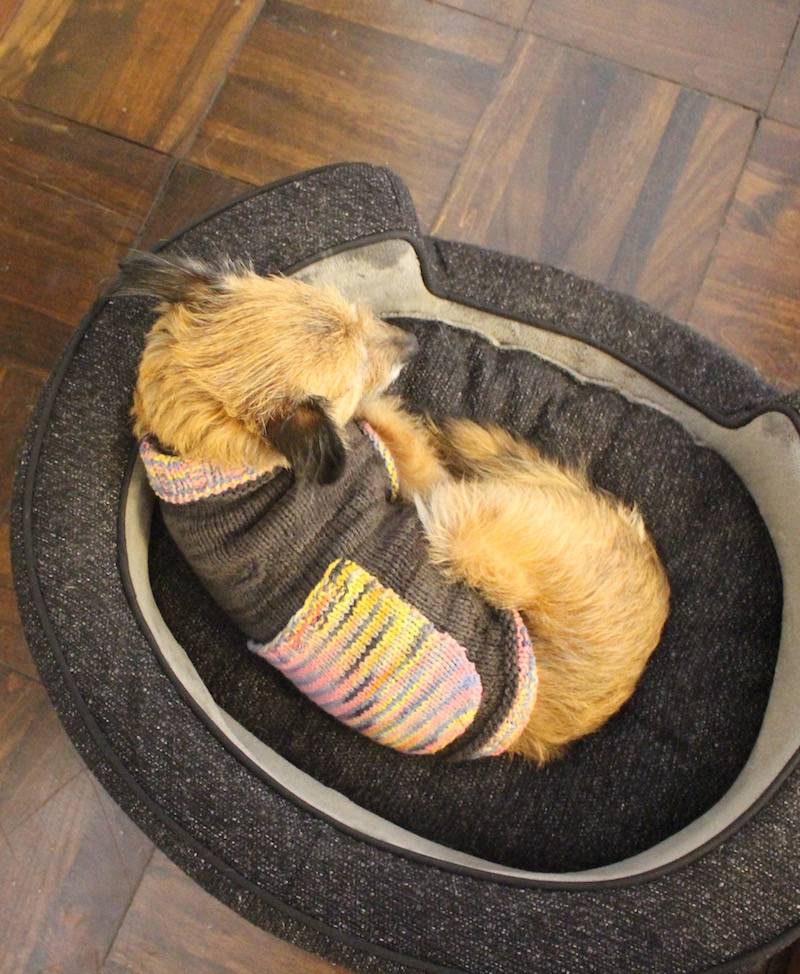 A Detour from Sweater Knitting

Something got into me when I was packing for the trip. Cleaning out one of my hidey-holes for craft supplies a couple of weeks before, I had come across my Alabama Chanin Anna’s Garden Long Skirt DIY kit in a plastic bag. Status: halfway through the 3rd of 4 panels of a kit that I had started back in 2013. The sight of it irritated me.

I had a wedding to go to when I got home from vacation, on August 19. I thought: if I take this kit with me on my trip (which will be filled with endless crafting time, as we imagine all vacations will hold), and work on it a little every day, I might get through the 4th panel, and I can wear this skirt to the wedding.

I didn’t think I’d actually do it. In fact, I had only made a tiny start on Panel 4 by the night before we returned from California.

I worked on it for 6 hours on the plane home, and by then I was close to done. Pretty close.

When I say “done,” I refer to the sewing. I was working these panels in negative reverse appliqué, which involves cutting around the outside edges of all the stenciled motifs that you’ve quilted down with a running stitch. So you’re not really done until you’ve done the cutting, and it takes (me) several hours to cut a panel.

Three days from the wedding. Could I do it? I figured I would try, and if I failed, I’d wear my Faithful Black Dress (yawn) like always, but I’d get even closer to finishing the skirt, so it would be a win. A triumph of psychology.

I worked on the skirt for the 4-hour train ride from New York to Boston on Friday. When I went to bed in the wee hours of Saturday morning, this was my nightstand: 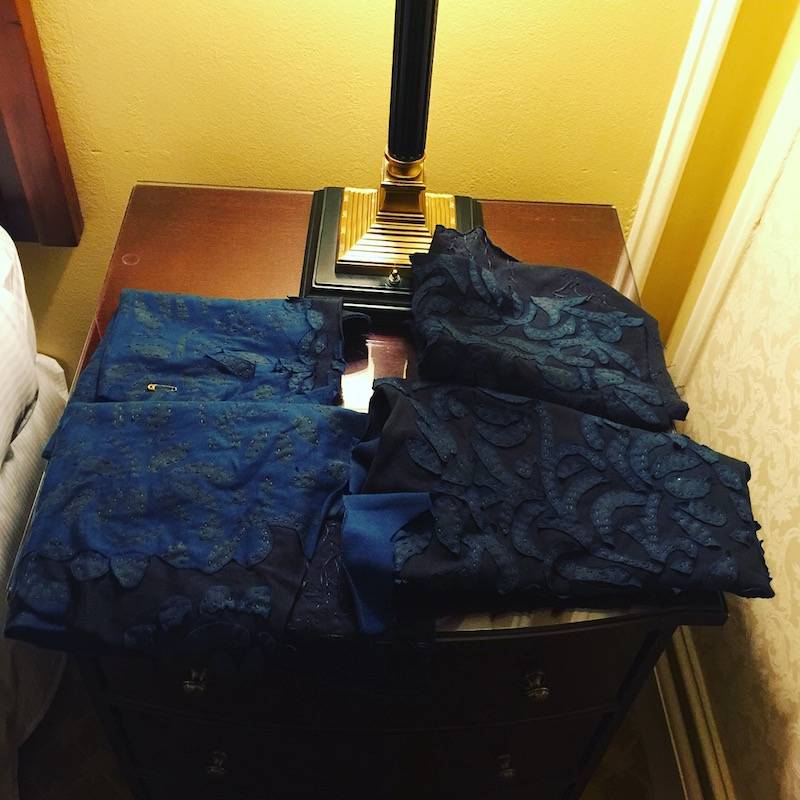 There was no way out but through. I was not going to surrender and go to Macy’s and get something just barely o.k.

I cut out the last two panels Saturday morning and sewed the four long seams, marveling at how the fabric was transformed by removal of the top layer. With my perennial horror of clothes being too tight, I cheated the seams a little. When I tried it on, it fit, but it was loose enough that I knew I was going to need to take in the seams a little. 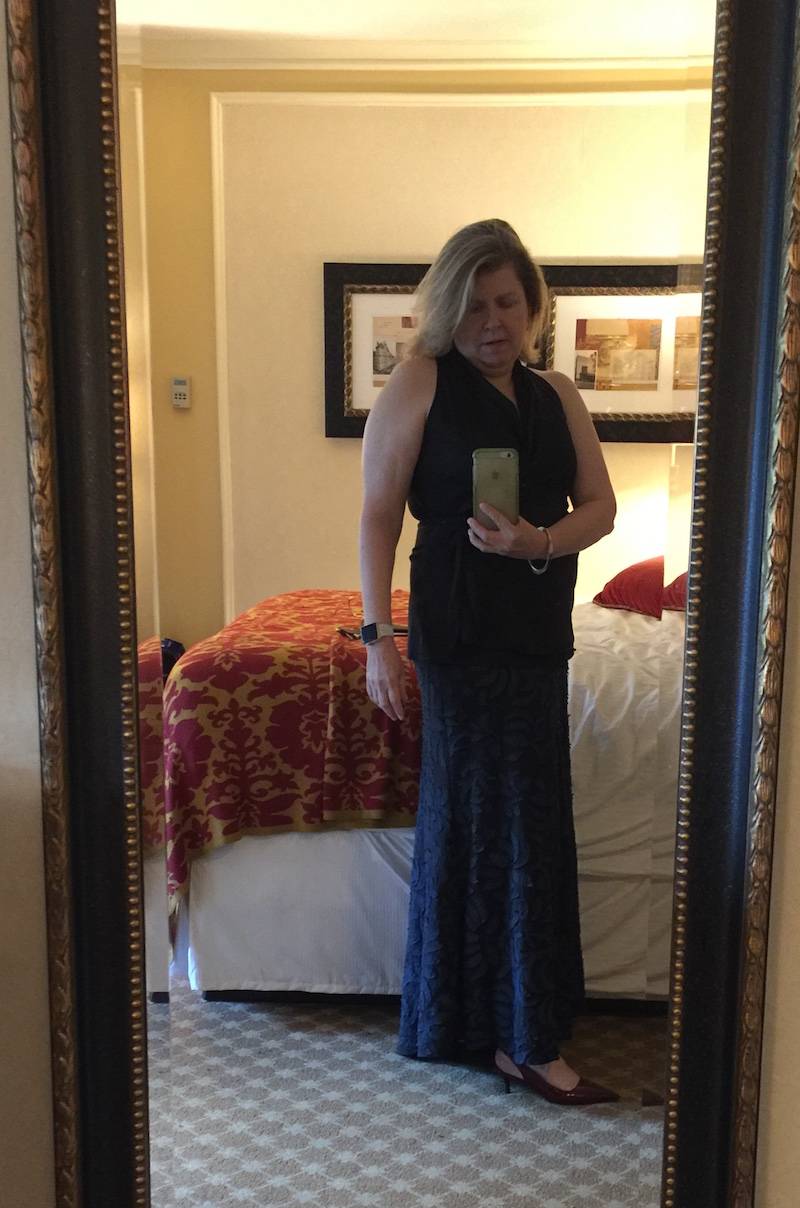 So: I wore it to the wedding without sewing on the elastic at the waist, a trick I learned from Natalie Chanin herself. The skirt required hitching up now and then on the dance floor, but it did not, praise be, fall off. 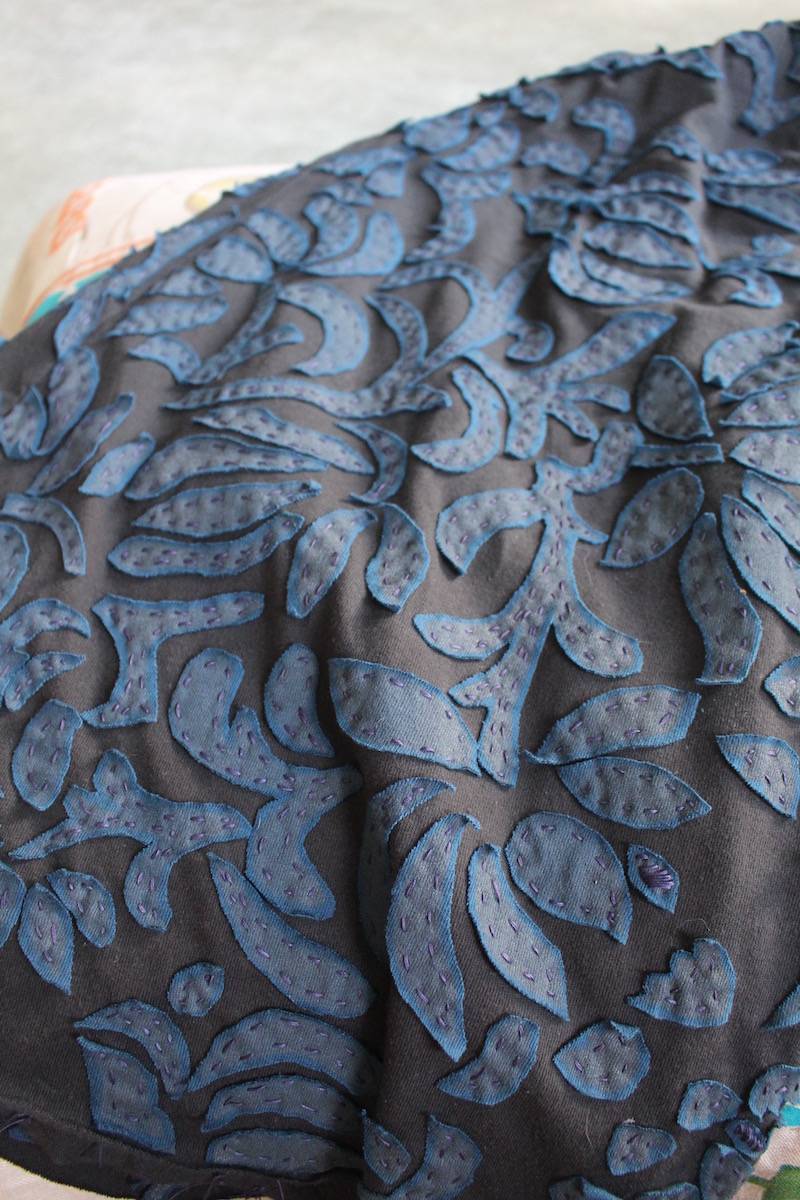 I’m besotted with the thing. I have never felt quite so good in a garment as this skirt. 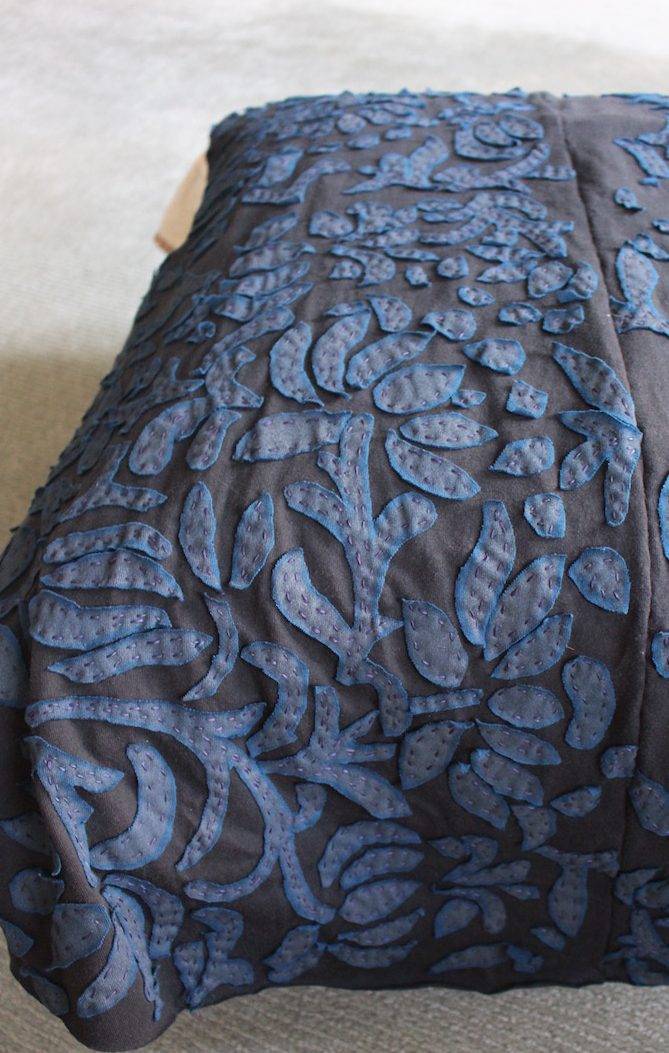 It looks as good on me as it does on Alabama Chanin’s willowy model, which is pure witchcraft. 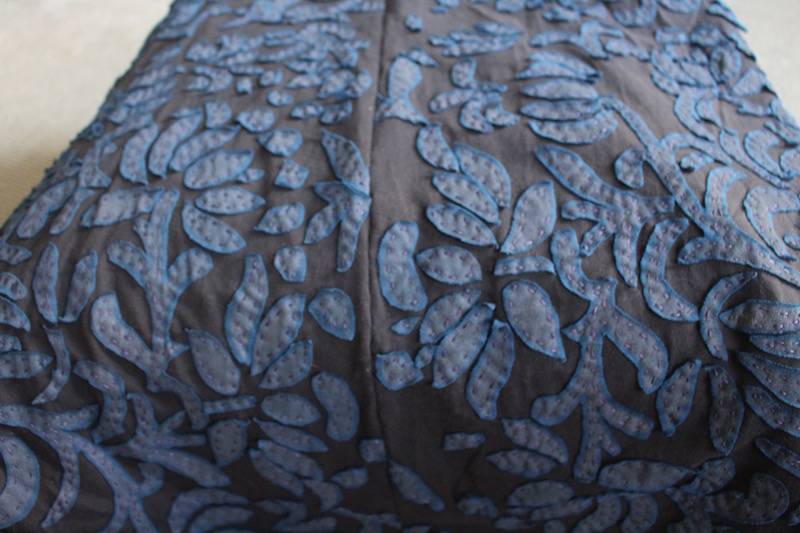 There is just something about it. That something that you know as soon as you try it on. Who knew I was a skirt-with-train person? (Natalie Chanin knew.)

The moral of the story: finish what you start, not because you have to, but because it’s so satisfying. It’s a lesson I keep learning. I’m really sorry this project is finished.

It needs a sweater, though. 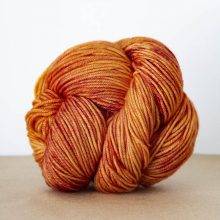