11 Comments
Letters / The Beginning of a Circle

The Beginning of a Circle

Dear Kay,
Well, I’ve gone and done the unthinkable. I’ve joined a nonvirtual, real-life knitting group.
Helped start one, actually–it’s a group of women who go to my church. It all started a few months ago when a mother of triplets suggested that the women of our church start a listserv. Before you know it, people were setting up walking groups, talking about sex education, and generally feeling all connected and cozy. It was only a matter of time before a knitter, the effervescent Judy (who is the sort of person who makes you want to give her a sweater), pointed out the obvious fact that what this group needed was a knitting circle.
Until Judy and I got together to cook up the details of the knitting group, I didn’t know what kind of knitter Judy is: a ferocious one. It turns out that she, who lives a block away from me, has a stash that resembles a New York City yarn shop. Chenille, boucle, eyelash, superfuzz, chunkywunky, all sorted by color. The ponchos coming out of that woman’s soul! I had no idea. We talked about knitting for four hours.
The first meetup was last Friday. We added at least four new knitters to the fold, and I even had the rare opportunity to teach one of our priests, the Ultra Reverend Anne, how to cast on. It wasn’t exactly a faith-based initiative. But it was clear that Anne had SOME kind of outside help, because she had that row of stitches done faster than I could fetch a piece of coffee cake.
On Sunday morning, as I stood in line waiting for my coffee, one fellow knitter reported the trapezoidalization of her scarf–“It went from eleven stitches to nineteen just like that.” Another told me that she’d already cranked a foot of scarf, ripped it out because it had developed a mysterious buttonhole-like deal in the middle, and redid it. A third told me that she had a moment in traffic where she asked herself, “Do I have time to knit here?”
People I have seen for years suddenly speak a language that I thought was from my own little weird world. I can hardly describe how disorienting, and pleasant, it is.
What I wish is this: that everybody we know online could hang out the way this knitting group did last Friday. That social thing–to talk while knitting, to sit there and not say a word while somebody else lets fly some outrageous tale, to see someone’s face as she tells the sad story–that’s the only thing we can’t quite capture through our computers. OK, that and the ability to pass yarn via email.
That said, there is in the online world of knitting plenty of room for a wacked-out obsessiveness that makes it possible to talk about, um, mattress stitch until we have thoroughly talked about it. I’m not at all sure my new knitting friends could stand it. Yet.
I guess that’s why it’s so remarkable when online friends actually do get together. I see Stephanie’s sew-up party and that houseful of women, up there in Toronto, a thousand miles away, sewing up afghans, and I’m trying to figure out what everybody looks like. (“That’s AARA!”) I see in one of the afghans my crummy log cabin square (See it? Second row, fifth square), and I just laugh and laugh. To think that a virtual world can turn into a loud, splendid afternoon in a newly painted house, well. How great is that?
Love,
Ann
PS As of this writing, the AnnCam is lying belly up on my desk, lens hideously and permanently extended, croaked out with the dire words SYSTEM ERROR on its screen. To meet the picture requirements set forth in the Mason-Dixon Knitting Rules of Composition, here are some tender memories from your trip to Nashville: 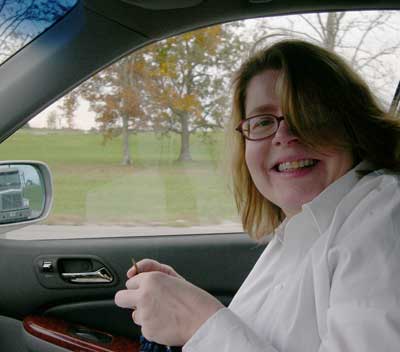 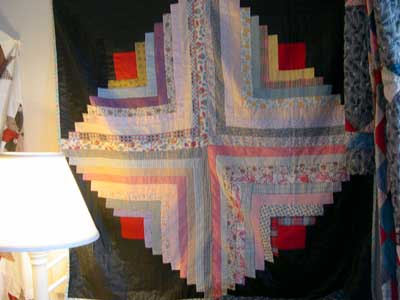 You try and try, but you just can’t get away from the log cabins.

Part of the Grundy County Parade of Shacks.