Tallinn, Estonia: Land of Many Contrasts 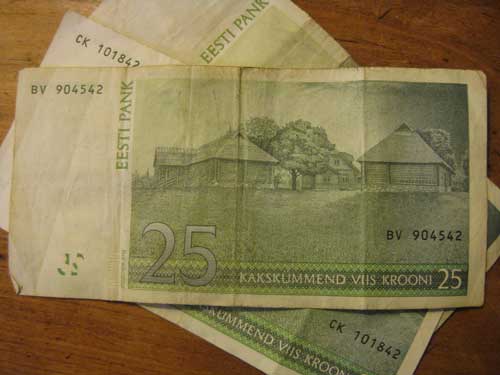 Dear Kay,
At about this point in the trip, I started to feel seriously stupid. The street signs were starting to get to me–I couldn’t figure out the name of anything, and the increasing number of umlauts and serial vowels meant that I was sounding out words in my own made-up Danish/Swedish fake language. I sounded like somebody from The Vague Land of Scandinavia.
Furthermore, all the money in my pocketbook was colorful, varied in size, and the coins were sometimes surprisingly valuable. There’s nothing like holding your hand out with a pile of coins in it and letting the store clerk pick out which ones she likes.
Hoping to get a peek at Estonian, I blew some 25-cent-a-minute cruise-ship Internet to see what the deal was with the Estonian language. It’s like this. I found cheerful encouragement over at Speak Estonian!:

So why learn Estonian?
You enjoy a challenge
With fourteen different cases and an utterly unrecognisable vocabulary, Estonian should test even the most capable linguist! If you’ve studied other European languages in the past, you may find it refreshing to learn one where you effectively have to start entirely from scratch.

Refreshing? Try Mystifying. Supersecret. Like Ubbi-Dubbi. Hats off to anybody out there who can rattle off some Estonian.
I had only a knitter’s understanding of Estonia. The words nupps, Estonian mitten, and Nancy Bush pretty much sum up my understanding of the place. I knew it was small, that it was recently independent, and the whole country had the population of Nashville.
The tour we took provided a moving window into a place where I came to see that the fierce knitting comes from a fierce people. Our guide Annili told us about her upbringing in the 1970s when Estonia was still under Soviet control, and it took about ten seconds for us to figure out that she and her fellow Estonians pretty much TOTALLY DESPISED the Russian government, even as they lived with Russians who were imported to Estonia to colonize it. The tsar-built superdeluxe cathedral in the middle of the city, the Alexander Nevsky, was seen as a symbol of Russian oppression. Daily life was unspeakably grim.
As we passed the big ampitheater on the edge of town, she showed us a postcard of a sea of people at the ampitheater, and pointed to the lower right corner. “That’s me,” she said. It was the Singing Revolution, the nonviolent protest in the late 1980s that resulted in Estonian independence in 1991. I just found a documentary, “The Singing Revolution,” that I want to see. Here’s the trailer, which is lovely. People rising up and singing for their independence is the sort of thing that really amazes me. 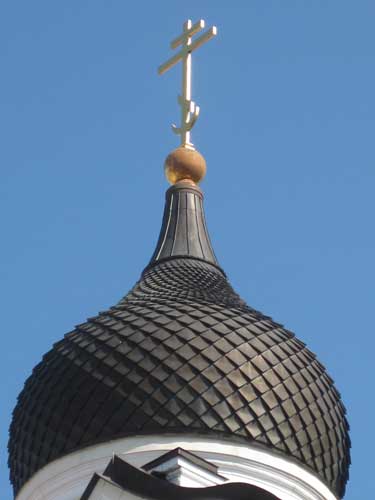 A dome from the Alexander Nevsky Cathedral. The Estonians are feeling better about this place now, which they express in new plaster and paint. 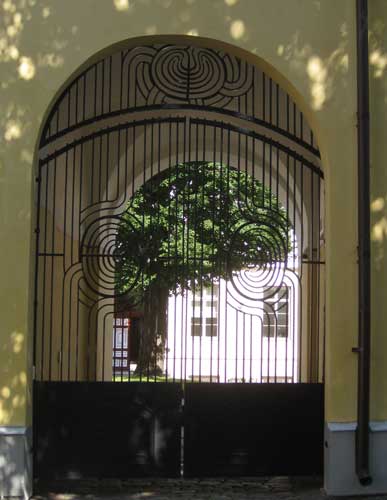 Beautiful gate, troubling place. This was the KGB headquarters in Tallinn. 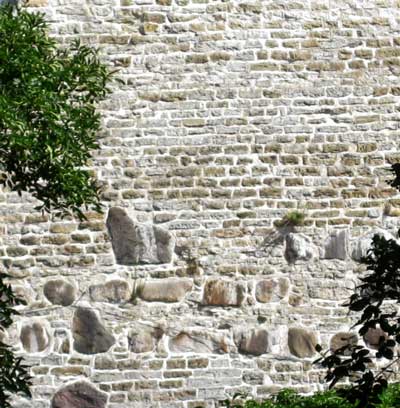 Apparently there were some quality control issues with the stone collecting. Somebody got fired, about six feet into this wall. 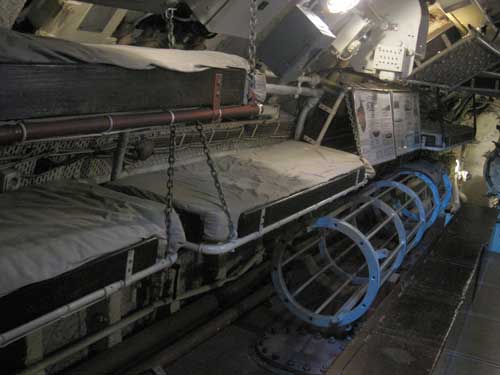 Ah, who doesn’t like a Soviet submarine tour? Hotbunking! Sleeping over a torpedo tube! Thirty days with no baths! Just like our cruise ship!
I let the guys go back to the ship so that I could wander around, illiterate and armed only with some colorful currency that might or might not work, along with my ATM card and a map in Estonian. About three minutes passed until I came across my first Estonian mitten, which was followed by dozens more, and sweaters, and hats, and nupps and lace and piles and piles of socks. I had come across the Knitting Wall, a bunch of stalls stuffed with knitting. OMG, take the day off, ladies!
At a yarn shop called Jolleri Käsitöökamber (I’m sure it means Purl or Loop or Yarn Barn), I found a piece that looked not particularly Estonian, but it looked particularly beautiful to me. 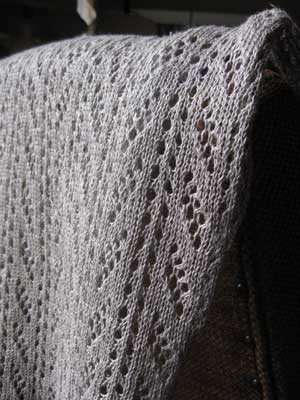 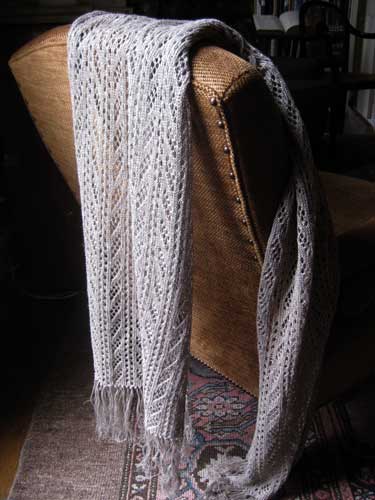 It cost $31. I think.
Love,
Ann
PS Next: Another day, another indecipherable language.