Dear Kay,
In the Samuel Pepys tradition of excruciating detail, here is where I stand on my Birch shawl.
Attempt Numero Uno 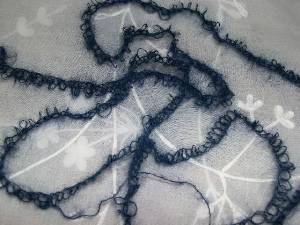 As Kenny Rogers says, you gotta know when to fold ’em. Something felt really wrong, after one lousy row. Wrong wrong wrong.
Attempt the Second 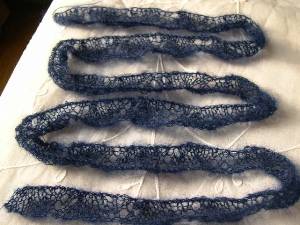 Ah, folly! Ah, youth! Why did I think that blindly knitting along for a while would result in lovely rows of airy birch leaves? Why did I not consider the following? Kidsilk Haze stitches tend to cling together, making it easy to knit two together. They slide right off the end of the needle, too, resulting in the dreaded Lost Yarnover. After a while, it became clear that my little markers were only adding to my misery. Nothing worked. The center could not hold.
I did cast off this irregular lump of whatever, figuring that it would make a nice edging to something if you did a kind of Elfin bunching. Anyone who would like this souvenir of knitting gone bad, just let me know.
The Final Ascent 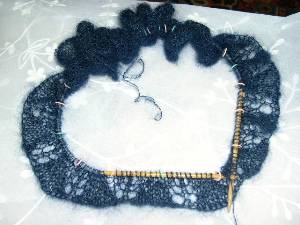 Emma’s exhortation rings in my ears: I am the master of this yarn. I almost got some speed going last night, but this is definitely a project for the quiet moments of the day. Two a.m. insomniac knitting.
And so to Pilates.
x0x0x0x0 Ann