Dear Ann, As proof that the Bang Out a Sweater knitalong is not over, because knitters are still finishing them, I present my own freshly blocked Stopover: (I know this photo is gloomy. I've been trying to take a picture of this thing all week. In late February, a person who lives in a north-facing apartment can get kind of desperate for daylight.) Notice anything about the yoke patterning? I know I once said I was going to skip the one-stitch pops of contrast color inside the square bit of the peacock-feather pattern, but I realized my lunacy almost immediately. The pops are everything. For my pops, I used the natural white color of Léttlopi, thinking that it would stand out brightly against the grays and the glacier. But it got completely mashed into the light gray. I worked that three-color stranded row for nothing! I could rectify this, of course, with 10 minutes of duplicate stitch, but so far I haven't. The only color I've got that would make a strong contrast is red. How do we feel about red? I'm mulling it over while I wait for an opportunity to hand this off to the size small person I made it for. But I've always liked red and aqua together, I've got the red--it's looking good for red. Hashtag #sweaterguilt In other knitting, I feel some urgency about finishing the Ranger cardigan I'm making for my friend Gael's Christmas (2015) gift to her hubs. Two months is not a long time to knit a man's cardigan-- at least I don't think it's a long time -- but I feel kind of guilty for tossing it aside while I banged out a totally unplanned pleasure cruise of a sweater. Ranger has arrived at the Three Tube Situation. Well, it's a cardigan so there are only two tubes for the sleeves and the body is flat, but as it's a yoke-construction cardigan, the joining-up process is going to be the same as for a lopapeysa. I've got that smug feeling of the person who studied hard for the test. I've got this, Ranger cardigan. Watch me work. Ranger is no Stopover in terms of speed of creating the fabric. The textured stitch pattern is compressed; not as compressed as linen stitch, but it is similar to linen stitch with a relief row of plain knit between the pattern rows.  So it goes kind of slowly. Still, I'm thinking that once I hit the yoke decreases, I'll sail on through to the collar and front bands, and git 'r done by Sunday night. Stop laughing, people. Love, Kay

Dear Ann, As proof that the Bang Out a Sweater knitalong is not over, because knitters are still finishing them,…

Bang, Bang, On the Door

Dear Ann, As the light faded yesterday afternoon, I snapped a progress photo of my Stopover for our Bang Out…

Bang Out a Sweater: SUCH FUN

Dear Ann, Although some—like you, for example—are still waiting by the mailbox for their yarn, our Bang Out a Sweater… 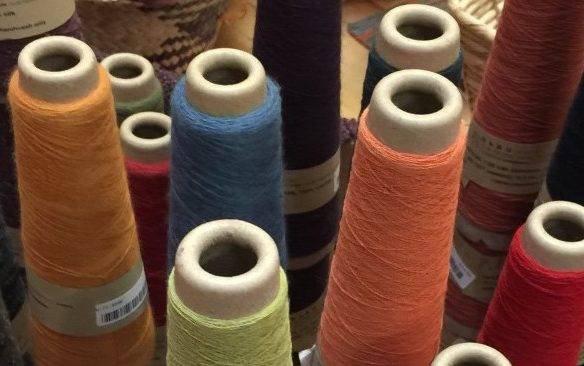 Dear Ann, First a couple of snippets. In Case You Missed It: Knitting Is Healthy Everybody I know is emailing…