47 Comments
Letters / St. Petersburg and Its Many Ресторанs

St. Petersburg and Its Many Ресторанs

Dear Kay,
Here we go with the lighting-round final dash through the city. I wasn’t sick of being totally illiterate, but I did wonder what would happen if I had to leave our guide behind. Talking louder does not, I discovered, make the words come out sounding any more Russian, no more than using a Russian accent helps, either. I was sounding like Natasha on Rocky and Bullwinkle to very poor effect.
By the third day, Hubbo’s game of figuring out the Cyrillic alphabet meant that he could show me how “Ресторан” meant “restaurant.” Total Helen Keller moment for me–as we drove around, there were Ресторанs ALL OVER THAT PLACE. Pectopahs everywhere you look. 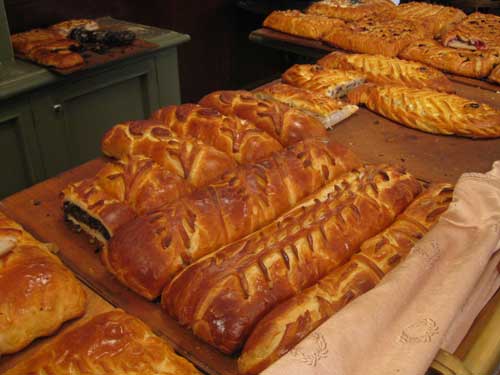 Cafe Stolle . . . we loved these lush pies so much that we kidnapped a cherry pie. 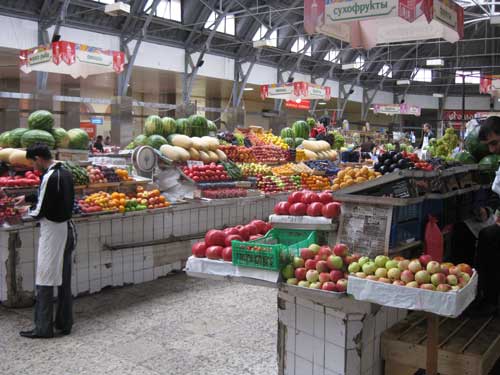 The fruit man really does balance a watermelon on his head all day long.
OK not really, but this market gave us a glimpse into Russian butchery of a mundane sort. The fellas—OK, we, OK, I—didn’t last long once we found the displays of meats that still looked pretty much like the thing they used to be before they got caught. This entire trip has left me realizing what a nonrevolutionary, comfort-seeking, unable-to-gaze-upon-a-skinned-rabbit WIMP I am.
(Maybe it was the story our guide told us about why they leave the furry paws of rabbits on the otherwise skinned carcasses. OK I’ll tell you: it’s to prove that it’s not cat.)
I did have a heroic moment when one vendor of slurpy things in white plastic buckets handed me a thing on a toothpick. It was dark, shriveled, and damp. To my amazement, I ate it without a blink. Either a pickled mushroom or pickled . . . something.
I quickly headed for the solace of the fruits. Fruit can’t be weird, no matter what language it speaks. 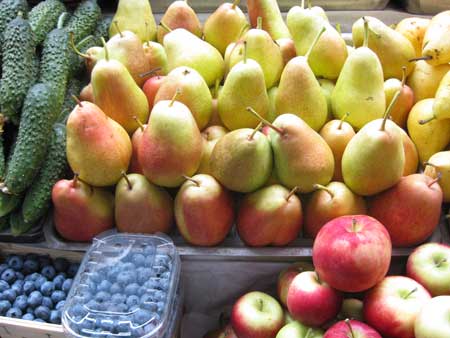 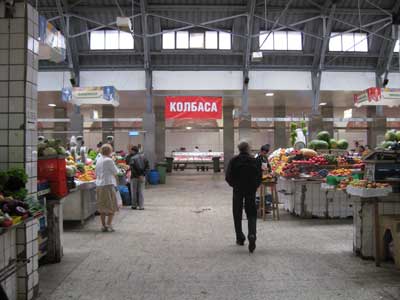 Kay, this is the Russian word for sausage. Do you know how it grieved me to see my favorite savory treat turned into this unrecognizable word? Even SAUSAGE was lost from me? If it hadn’t been for our guide’s translations, I wouldn’t have even known there was sausage in the BUILDING. 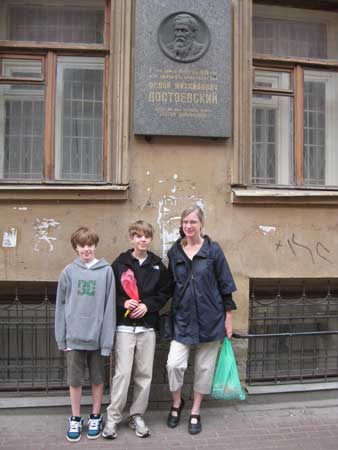 “One day, children, you will thank your mother for doing something as superpretentious and boring as taking your picture by this plaque at Dostoevsky’s house. Remember, sons: you need to read at least the first three chapters of at least two Dostoevsky novels in order to pretend that you have read Dostoevsky.”
Ah, how I treasured this glimpse of the street that appears in Crime and Punishment, one of the world’s great novels and certainly Dostevsky’s finest, in my opinion.
Having read SO much Dostoevsky. Of course. Достоевский, I mean. Because at this point, I’ve got my Russian DOWN.
Artillery Museum AKA Costume Institute of St. Petersburg
At this moldy old arsenal, we saw many weapons of mass destruction. 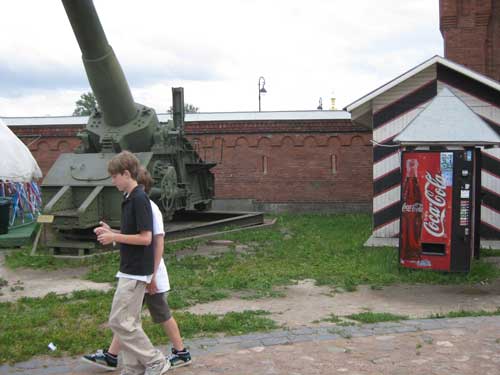 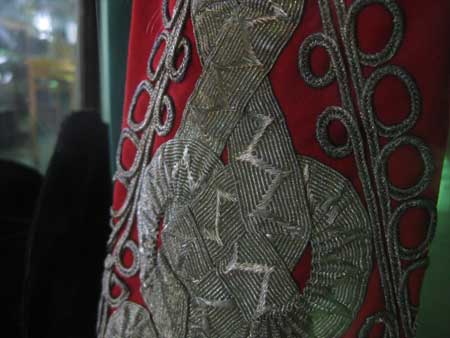 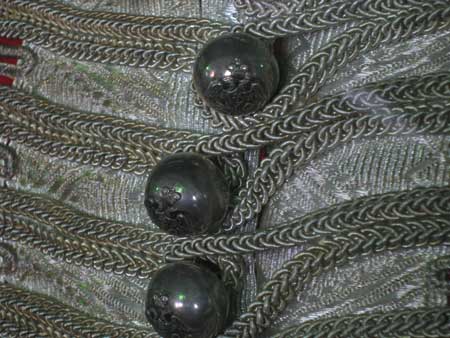 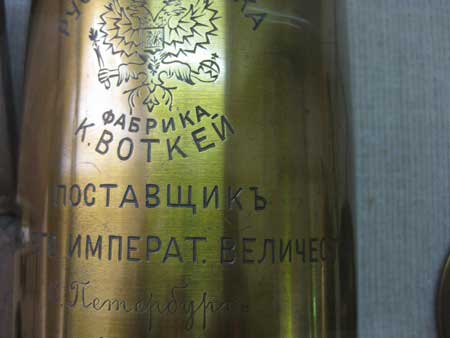 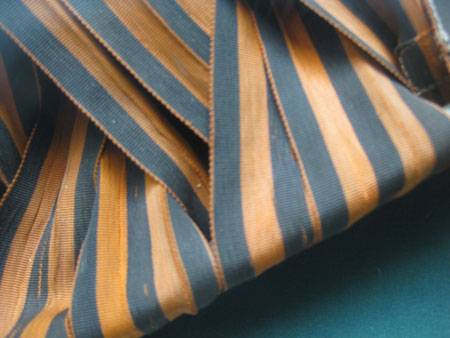 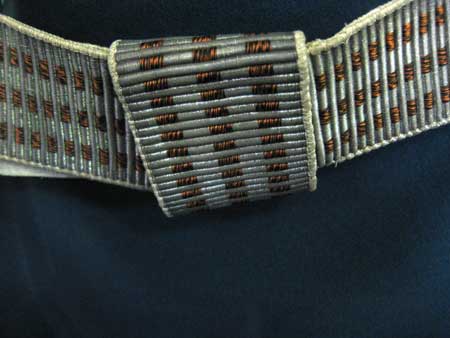 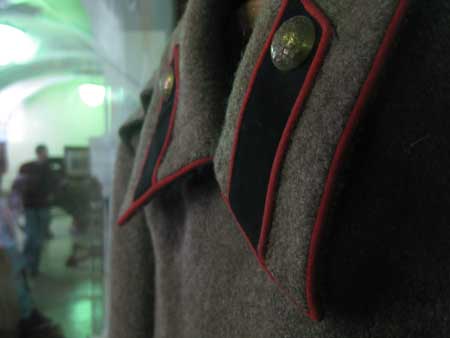 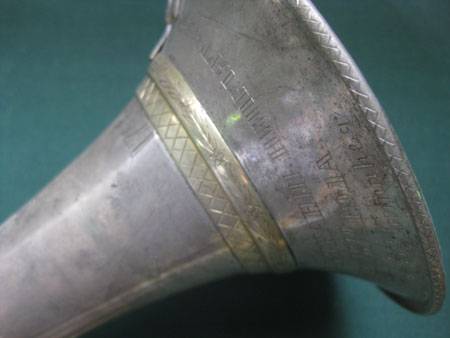 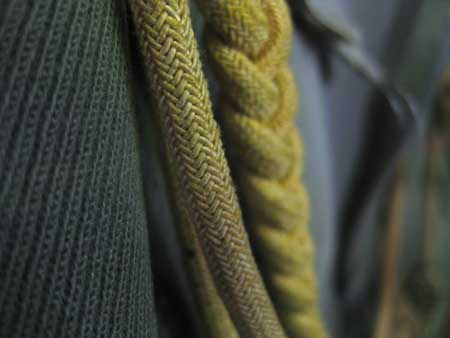 And then it was time to go.
Back on the ship, I put up my beTsuboed feet for a rest, and when I opened my eyes, expecting to see the Gulf of Finland, I saw an apartment building, CLOSE, not fifty yards out my window. Wha? I ran out to the balcony and discovered that Captain Dag, our supertall Norwegian captain, was taking us out of town through a narrow canal, not the open sea that I had thought would be the logical exit route. Crazy Norwegian hotdogger cruise ship captain!
I was looking straight into a ninth-floor apartment window, and a man stood on his narrow apartment balcony looking at me with an expression as surprised as mine.
I made a timid wave, and he nodded.
The apartment dwellers watched us from the shore, and children ran along with the ship. An old woman in a house dress pointed at us as if she wanted to make sure the children playing beside her didn’t miss the 13-story-tall, white cruise ship that was casting a shadow on them.
In our own apartment building, somebody up on Deck 12 was lobbing ice cubes into the water, which looked like hail. Somebody below yelled up, “Who’s throwing ice?” 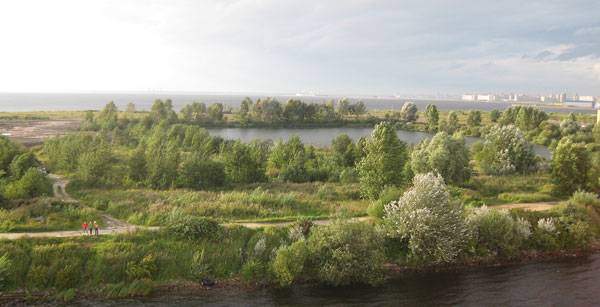 Love,
Ann
PS Much crazier Russian touring can be found in Ian Frazier’s brill two-parter on his road trip from St. Petersburg through Siberia to the Pacific coast. Part I begins in the August 3 issue of The New Yorker. Reminds me of my brother Clif and his wack travels to wack destinations.
Next up: Helsinki On Some Unrecognizable Amount of Finnish Kroner A Day.