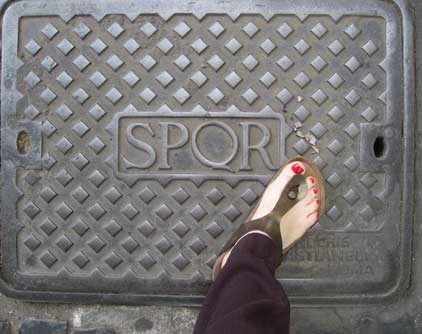 Ciao Ann,
I’ve been away. In a merely physical sense, I was off on a Jubilee Year Junket to Rome and Florence. But actually I was a stranger in a land much stranger than Italy could ever be. I was in Orna Land. (Longtime readers may recall my friend Orna, who was depicted in scrupulously fair and accurate fashion in this report.
In Orna Land, the following are not allowed, and may be considered danger signs of decaffeination:
Sitting (except in the pew of a church that has a Caravaggio).
Refusing to enter any church, palace, museum or coffee bar.
Pretending not to understand Italian (everyone understands Italian).
Not saying, “Yes! That is amazing!” when asked, “Isn’t that AMAZING?!!”
Asking for a break.
Taking a break without authorization.
Asking to go home. (There’s no crying in Orna Land!)
Going to bed before 2 a.m. local time.
In Orna Land, the following are mandatory:
Drinking coffee.
Talking to strangers.
Speaking Italian. (“Doo-ay caffay macchiati con doo-ay beeky-airy de aqua, per favoray!”) (Other useful phrases: “What? No raw sugar? We’re leaving!”)
Stopping in every profumeria and erboristeria, smelling at least 10 concoctions, and making a good-faith effort to decide which one smells best on Orna.
Daily gelato therapy.
In other words, I had a fabulous time. Orna has been to Rome and Florence many times, and has lived in both cities, which is why I begged to tag along with her on this trip. She was, to use an Orna-ism, an AMAZING guide. The girl can hone in on the fried artichoke di tutti fried artichokes in the Jewish ghetto with laser-like accuracy. With Orna, you get only the most tipico, classico of all delicacies. The greatest of which, in Orna Land, is coffee.
Although I just returned, it’s all a blur. To identify my photos I have had to get out all my admission stubs, my picture postcards, and my Lonely Planet Rome City Guide, to try to remember where the heck I was. So please indulge me in a random photo show, and if I misidentify some masterpiece or piazza, chime right in with your corrections. I feel a little like Odysseus. He was probably glad to sit down and get back on his laptop, too.
Rise and Shine and Andiamo, Already
In Rome, we were staying near the Campo de’ Fiori. Our top priority each “morning” (in Orna Land, the period between 11:45 a.m. and noon) was to go to the coffee bar that was a 1-minute walk away, so that we would have the strength to make it to the coffee bar that was a 2-minute walk. 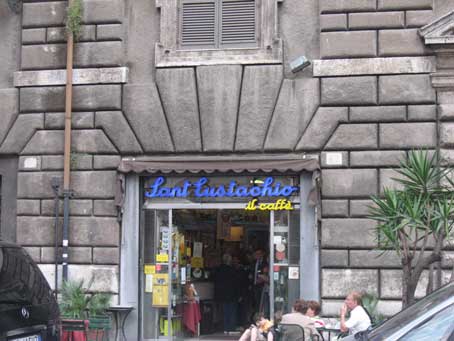 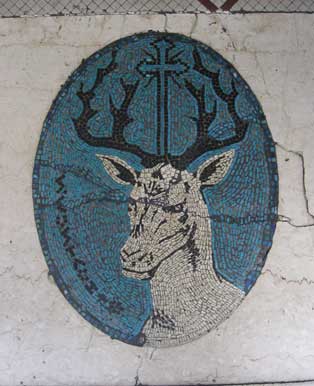 In Rome, one must get used to walking on old works of art, such as this mosaic on the floor of Sant’ Eustachio. There are just too dang many works of art; some of them have to get walked on. 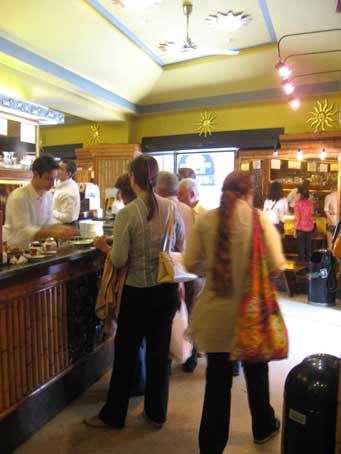 The 2-minute coffee bar was Tazza d’Oro. My all-time fave. 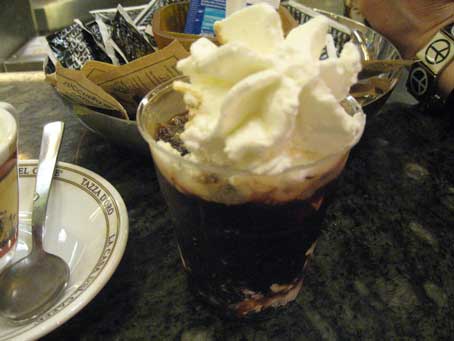 Tazza d’Oro’s speciality is its coffee granita with obligatory whipped cream. The granita is so sweet that it curls your teeth, and the coffee is strong enough to knock you down. The whipped cream is not sweetened, which is the secret of the whole recipe, I think. In the dozen or more times that we stopped in Tazza d’Oro, I saw everybody from Japanese tourists to elderly locals sighing in bliss upon receiving their granita di caffe. 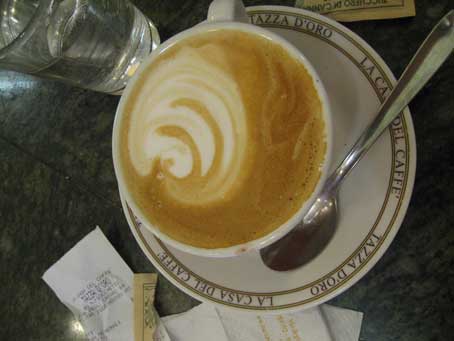 The best part of waking up. (Note: In Orna Land, there is no sitting involved in drinking coffee.) 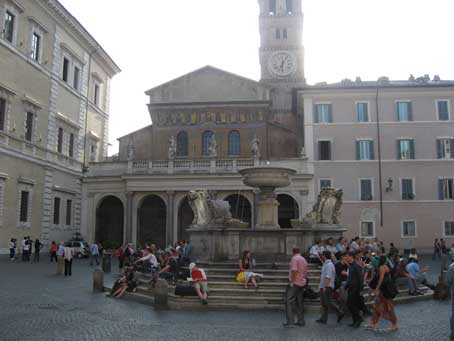 We spent a lot of time in Trastevere. (Mainly in churches, of course.) 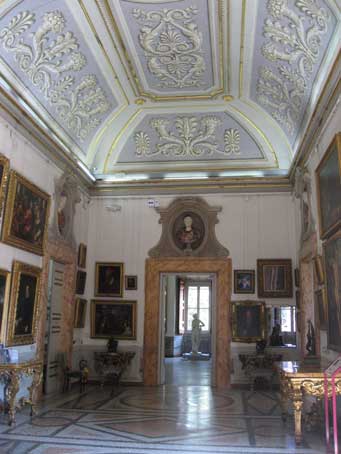 We had the Corsini palace and its masterpieces to ourselves. No guards, no nothing. Just a guy to sell you a ticket at the door. Of course, they have a Caravaggio. Doesn’t everybody? 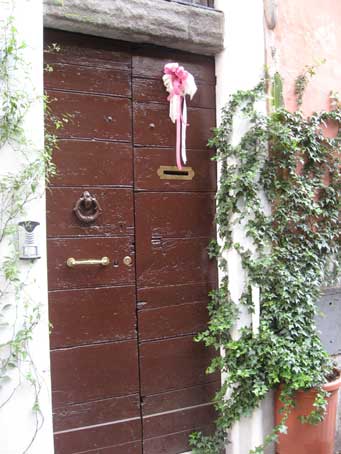 Here and there, we saw doors hung with these little pink rosettes. We speculated that the family inside had a new baby girl, but we never saw any blue ones so we weren’t sure. Romans, please advise. 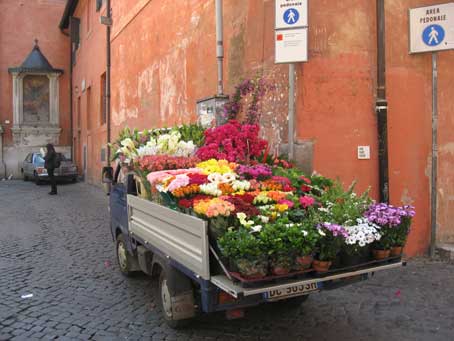 Neither of us was brave enough to snap a photo of the napping driver of this parked flower truck.
The Museum of Awesome Ideas for Knitting and Quilting 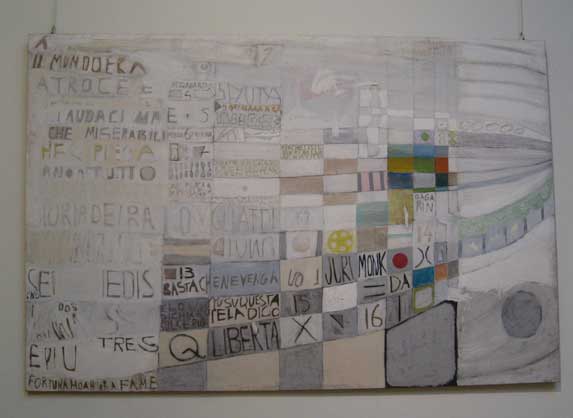 We spent two afternoons in the Villa Borghese gardens (so many benches, so little sitting), including the Villa Giulia’s Etruscan antiquities museum and Rome’s museum of modern art. (The painting in the photo is Poetry Reading Tour by Gastone Novelli, 1961). 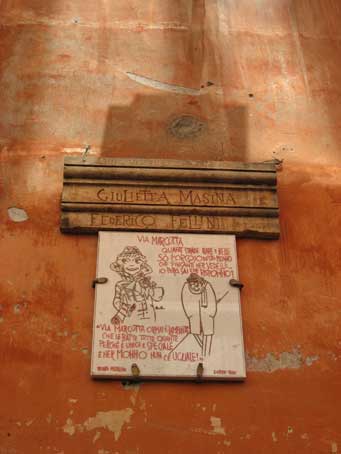 A highlight was passing by Fellini’s house with its affectionate plaque.
Call Me Miss Honeychurch
I knew that Orna knew Florence well, but I was not prepared for people running up to her, shouting, hugging her, and standing in the middle of the street catching up with her for half an hour. Quite startling at first, but I got used to it, especially when approaching the coffee establishments. 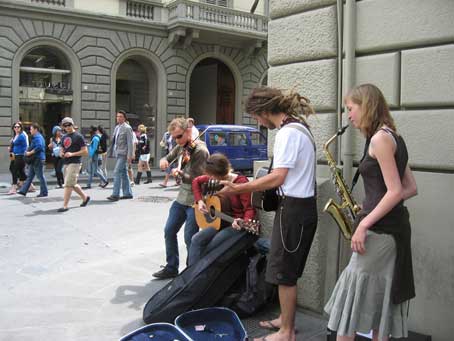 Firenze is known for its bluegrass music in the streets. (Not really.) You will be proud of me, Ann. I did not sing along, or even call out a request for “I’ll Fly Away”. 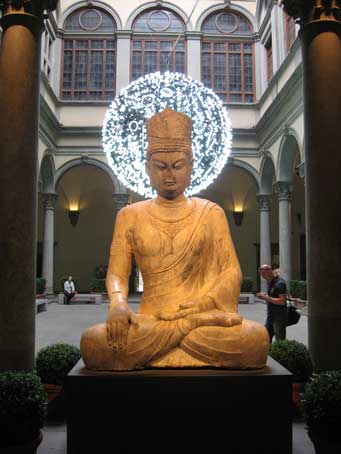 Every palazzo should have a Buddha (he’s so lucky to be sitting) and a chandelier made out of a couple thousand compact fluorescent bulbs. I think this is at the Palazzo Strozzi. The palazzi fairly whizz by in Orna Land.
Eatin’ Buon in the Neighborhood 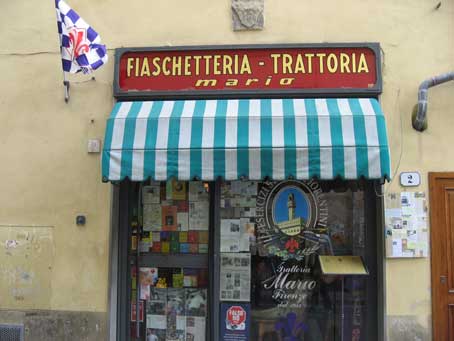 Da Mario is a local lunch spot. You are seated at large tables with other customers (many of whom know Orna, needless to say). You are told what they have to eat that day, and you pick something, and it is very good. 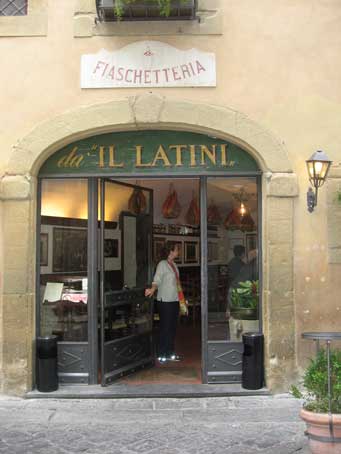 Il Latini. Do not under any circumstances miss this restaurant if you are in Florence. To be avoided by persons sensitive to the sight of many, many prosciutti hanging from the ceiling. Every bite is the best you’ve ever eaten of whatever it is.
Look Ann! Scribble Lace! 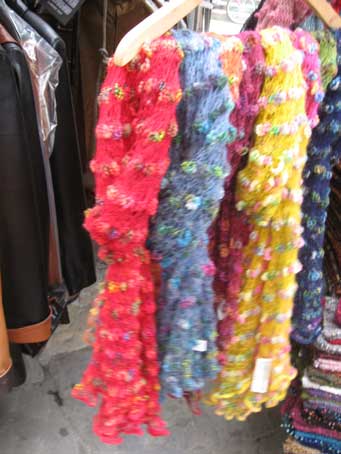 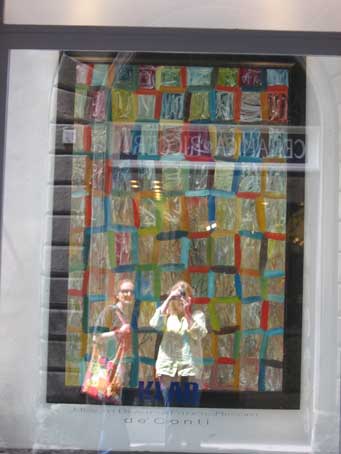 Just something decorating a shop window, but every time I passed it I wanted to log cabin the thing.
I Saw Something Nasty in the Arno 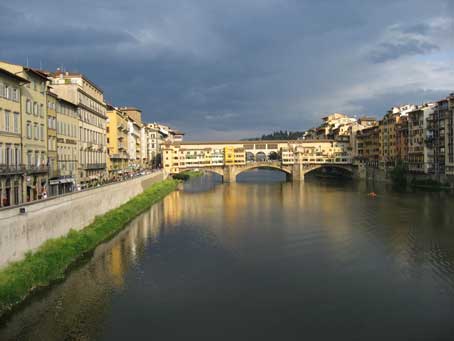 While taking our obligatory Ponte Vecchio pix, we were mesmerized by the giant fish and baby ducks we could see in the shallows. Until we saw a rat the size of a pig try to eat one. It had a long hairy tail and icky gray and black fur floating in the current. It was a rat I tell you! A giant rat! It about put me off my daily gelato! We kept asking people about the giant Arno rats and finally somebody suggested it was a nutria. Ick. Ick. Ick. Moving ON. 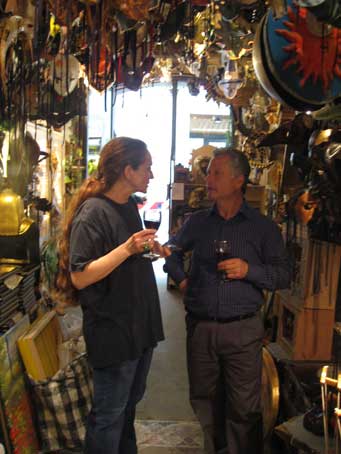 We had some lovely hanging-out moments with Orna’s pals. (Note standing position.) 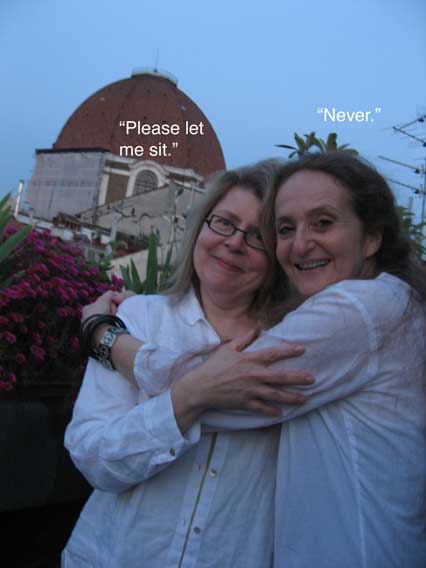 Despite the rigors of Orna Land and the Giant Arno Rat, I would do it again very happily, and hope I get the chance to.
Love,
Kay
PS The Madonnas! I almost forgot the Madonnas! Here’s a sampling of the streetcorner Madonnas I managed to snap along the way. I grew to love seeing one as I passed, and I’m sure that for the locals they are beloved landmarks. 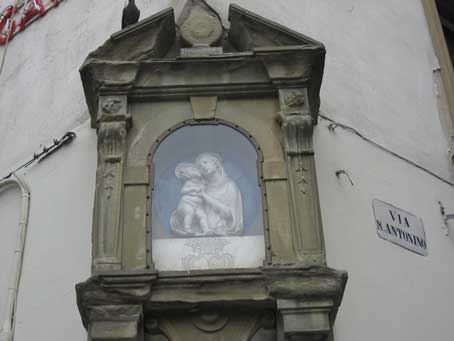 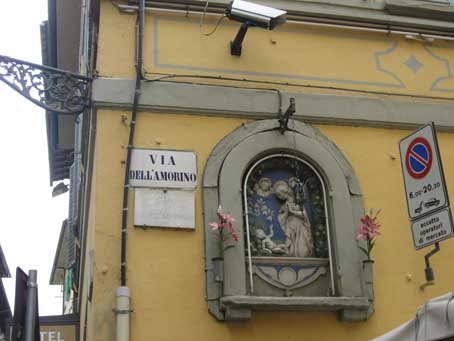 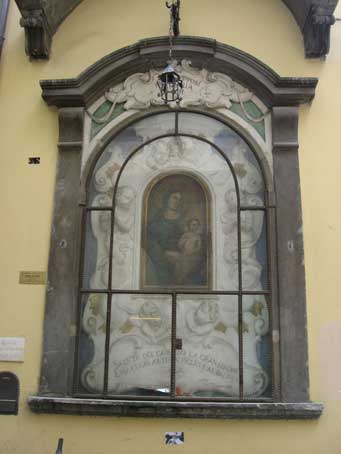 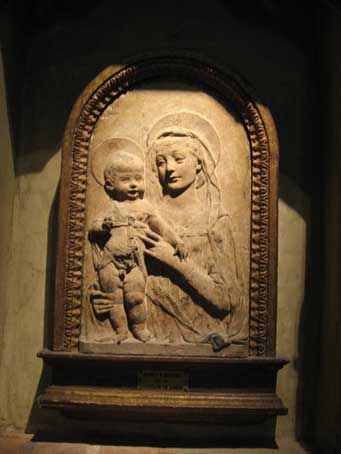 (This one was not on a streetcorner, but in the master bedroom of the Palazzo Davanzati, right where a TV might be today. It’s my favorite.)