First a couple of snippets.

In Case You Missed It: Knitting Is Healthy

Everybody I know is emailing me this blog post by Jane Brody for the New  York Times. For those of us who knit, it’s kind of obvious–knitting relieves stress–but I was tickled to learn that Jane Brody knits.

A Hot Tip From Fringe Assocation

Fringe Association’s Hot Tip series is like sitting next to a knitter who knows what she’s doing and shares all her cool tricks.  This one, on marking your rows using scrap yarn, blew my mind with its simplicity. No gadget, pencil, paper, or pins are required. Just a length of scrap yarn that you carry along, so it’s always there.

Stopover Is Now Bigger (and Smaller)

With speed worthy of a sweater that can be knit so quickly, Mary Jane Mucklestone has revised the Stopover pattern to add one smaller size, XS, and larger sizes 2x-5X.  If you purchased your Stopover pattern on Ravelry before the revision, you’ll automatically receive an updated pattern on Ravelry. (Also, check out Mary Jane’s Stopover post and video if you like prancing, leaping like a gazelle, and suchlike.)

I generally don’t swatch when I begin a project, even if it’s a garment, where gauge affects size and wearability. I’ll start with a sleeve, or even the body, and after I’ve made a little progress, I check my gauge. If it’s off and I have to start over, I’ve wasted a bit more time that I would have if I’d swatched, but it’s a risk I’m willing to take and it generally works out OK and basically I’m incorrigible.

Incorrigible, but not reckless. Stopover, our Bang Out a Sweater knitalong, calls for knittingLéttlopi, an Aran weight yarn, at an unusually large gauge of 13 stitches over 10cm/4 inches (instead of 19 stitches over that length). I also know, from experience, that Léttlopi grows significantly after washing. Given the unfamiliar gauge and the growing-with-washing, I decided to swatch, for a change, and wash the swatch to be sure. 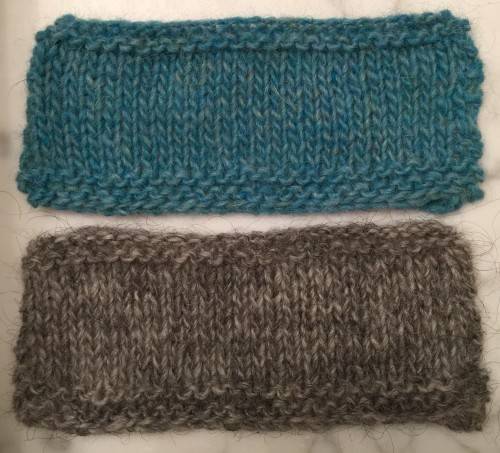 (Note: the two swatches are the same size.)

Before washing, I got 14 stitches over 10cm/4 inches, tighter than the required gauge. If that gauge did not change with washing, my sweater would be too small. There is not enough ease in Stopover to fudge a too-tight gauge discrepancy. 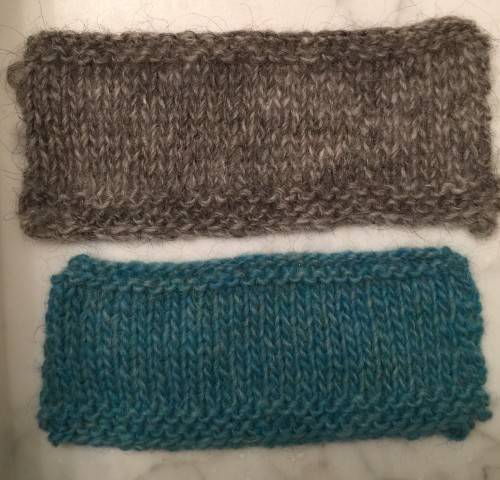 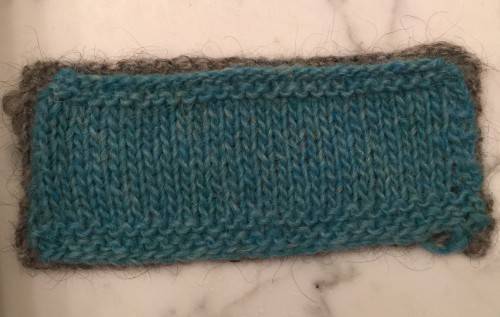 The grey swatch only looks a little bit bigger than the blue swatch, but when that small difference is applied over the many more stitches in a sweater, it makes a big difference.

So I’m knitting my Stopover on size 10 needles, and I’m going to try not to worry that the sweater looks too small while I’m knitting it. It will grow quite a bit with washing.

Also: the fabric is, as promised, light as a feather but not transparent or gapey. Perfectly sweater-like. I’m excited.

Scratchy or Not Scratchy?

As folks consider possible yarns for their Stopover, a few people have been asking, “But the lopi–isn’t it scratchy?” They’ve heard it’s scratchy. Or they touched a lopapeysa once and thought it was scratchy. They’ve heard that you can rinse a lopi garment with hair conditioner and all of a sudden it feels as soft and shiny as the Breck Girl’s long, luscious locks.  Where’s the truth in all this?

Here’s the thing: one person’s “scratchy” is another person’s “warm and lofty and oh, yeah, not the softest thing ever but perfectly ok.” The way a yarn feels is quite subjective, a matter of individual sensitivity. Ten years ago, I was unable to wear even the softest merino wool. It made me itchy and red in the face, to the point that I thought I might be allergic to it. (I don’t think I was.) Knitting with wool yarn didn’t bother me, so I kept using it, just not wearing it. When knitting a blanket, I’d spend hours with a growing pile of wool on my lap. Over time I realized that wool no longer bothered me, and I started to wear it–starting with soft merino and going from there. And now I wear all types of wool with no discomfort. Weird, and wonderful. I’d been missing out!

Last night we got to sit in at a cozy Knit Night at Windy Knitty in Chicago. Among the crowd gathered around the table was Corinne Niessner, of Lucky Penny Knits. 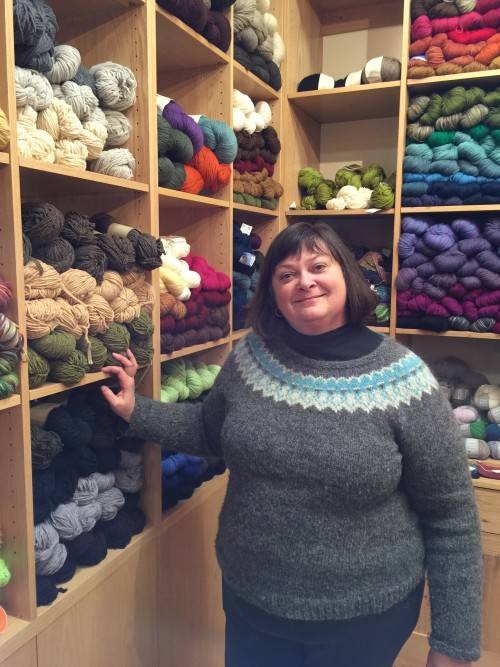 Corinne was wearing a lopapeysa knitted in Léttlopi. Upon questioning, Corinne reported that she was comfortable and not itchy. She was wearing a shirt under the sweater (it being January, and Chicago), but she didn’t think that made much difference.

Lopi may not seem soft to everybody, but it definitely is softer after washing than before. The wool fluffs up and expands,  and it seems like the long, soft fibers come to  the surface. I don’t use hair conditioner in the wash water, but I do use a dot of the same shampoo I use on my hair. It smells great, if nothing else, and I think it helps soften the wool.

You know yourself best. If lopi feels scratchy to you, avoid it. But don’t take it on somebody else’s say-so; try it yourself.