Ready for the Soak Pot 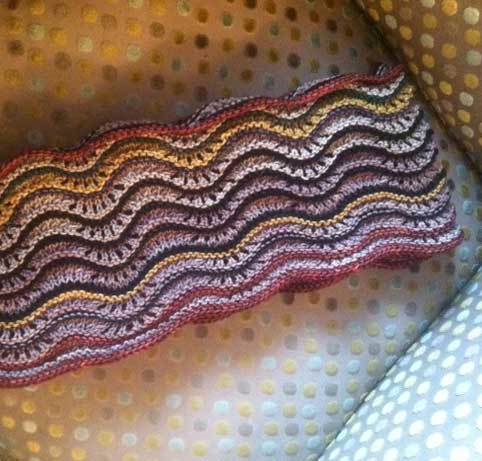 Dear Ann,
Here in Manhattan, last Friday/Saturday’s snowstorm was really just a very nice snowstorm. We enjoyed it a lot, while suffering none of the treacherousness endured by those to the north and east. Olive particularly enjoys a nice snowfall. She hates things that are cold and/or wet, but she loves snow. Our Olive contains multitudes. After a single walk in the snow, she sleeps for a minimum of 5 hours, out cold and snoring delicate terrier snores.
Sitting around got me to the finish line on my Chevron Scarf from Scarves, Shrugs and Shawls. This scarf was a stashbuster supreme, meaning that I only had to buy one skein of a Madelinetosh neutral (French Grey) to use up nearly every yard of leftovers from late, great Honey Cowls I have known. My own Honey Cowl is in there, as is Carrie’s, my mom’s, Diana’s Emma’s, Rosanne’s and Colleen’s. The only nubbin I didn’t incorporate was the Artyarns from Rosie’s cowl, because its Easter Egg pastel clashed with the gentle murk of the other colors.
The pattern calls for Rowan Felted Tweed, which is a smaller gauge than Madelinetosh DK. I knew that, but did not give it a single thought as I cast on 427 stitches and upscaled my needles to US8.
And so, as surely as God didn’t make little green apples, and it don’t rain in Indianapolis (in the summertime), the laws of gauge are rigorously logical (bigger yarn + bigger needles + same number of stitches = bigger scarf)– and the finished scarf is 104 inches long. This may be a Personal Record scarf length for me. It’s nearly too much scarf. I may give it to a tall person. It will grow with washing and blocking, but hopefully only in width, as it was knit side-to-side.
427 stitches! The issue with such long rows, especially when you are using leftovers, is whether you are going to make it to the end of a row without running out of a color. In a couple of spots I had to change color. Which makes it, very subtly, a bit raggedy. Nobody but me will notice it, but I do notice it. Isn’t that always the way? 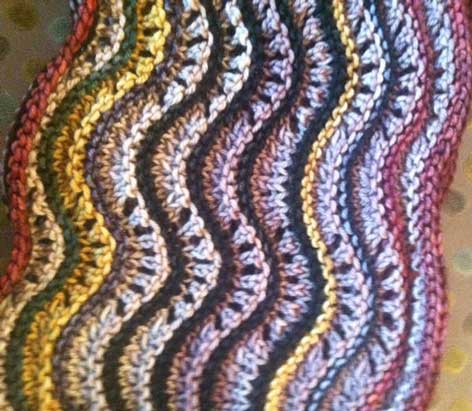 It was so much fun to feather & fan!
Love,
Kay