26 Comments
Letters / Perfect Project: An Interlude, then a VOTE!

Perfect Project: An Interlude, then a VOTE!

Dear Kay, and Everybody Seeking the Perfect Handknizizzle,
You think I’ve been just sitting around with the markers, drinking heavily and making mind maps of my grocery list. Well, let me tell you–your recent decision to revisit the cardigan for Dennis Weaver/your dad rekindled in me the desire to finish up some achingly undone projects. Not only will I relieve the crushing guilt of having promised sister Buffy a handknit in 2003, it fulfills part of my new year’s resolution (the nine-month-old one) to complete unfinished objects by year’s end.
Maybe it’s that late September time-to-atone feeling–and I’m not even very Jewish!
Wooooooo! 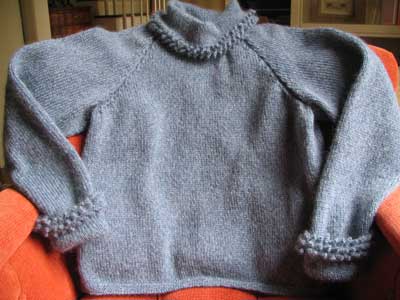 I’ll be brief. Sister Buffy picked the yarn and the pattern: Rowan Kid Classic in a heathered blue that reminds me of . . . denim . . . and the Woo pattern from Rowan 30. I shortened the length and shortened the collar because we all know that Kid Classic has the insulating properties of a good fiberglass.
The whole projeck was a quick cranker until I screeched to a halt, in 2003, because of Nubbin Dread. The little fringey nubbin deals I’d met before, when I made another Rowan nubbin-based sweater, Splash:

To make a nubbin, you cast on stitches then cast them right back off. Sounds fun? Let’s just say this is the end of an era over here at the Shayne Piecework Factory.
Dude, where’s my collar?
Dude, why are my nubbins so hazy?
Dude, what a passel of seams just for a hazy nubbin cuff.
Dude, what a wacky decorative raglan seam. Six purl stitches down in there. Makes it all, like, dimensional and stuff.

Dude, I hope my sister appreciates this.
Dude, she’s probably so disgusted at this point that she’s forgotten that she asked for any stinkin’ nubbins.
As far as I’m concerned, the perfect project is a DONE project.
Speaking of which . . . 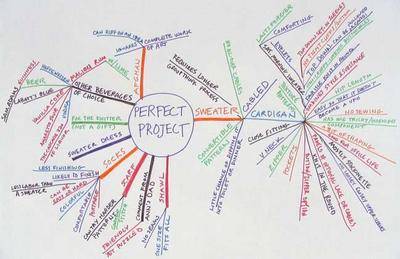 [click for the big picture]
Here’s how the nominations for Perfect Project shook out. Very interesting. Conclusions to draw from this incredible foment of ideas:
We will never resolve the beverage issue.
I’m not sure what hesseweisen is but it sure sounds tasty.
The Perfect Handknit will include, somehow, lime.
There are factions agitating for socks, for shawls, for afghans and scarves and the sweater dress. [We pause to consider the sweater dress.]
But if this mind map tells us anything, it tells us that the sweater is what we are thinking about the most.
So many questions will remain unanswered. Did the choice of Cascade 220 lead us in this direction? If we’d begun with the project first, would our yarn have ended up being something different? I feel like General Robert E. Lee, people, I really do, right when he stood on the steps of the courthouse at Appomattox wondering what might have happened if his troops had reached that supply train in time. You think it’s easy to facilitate a situation like this? The hard decisions!
Now, I know you’re itching to get going. Let’s have a quick vote here, then we get down to the real knitty gritty.

Love,
Ann
PS–I know you’re wondering, so I’ll just tell you: the mind map of my grocery list reveals an unholy concentration of carbohydrates and a large branch labeled “Frozen.”