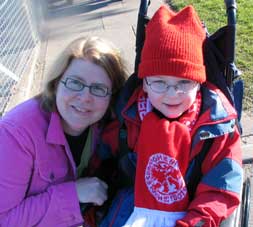 Dear Ann,
I know you’re loopy about the logistics of leaving home to go further than the grocery store (I just got an urgent email from SAVE_THE_GUINEA_PIGS.ORG). We’re both loopy at the prospect of standing up in front of people and, um, saying something? Anything? Having a pulse? Not sweating through our matte foundation? But me, I also have lingering, unprocessed loopiness from my brief trip to England. So, let me just fire some pictures at you, with only the most succinct of commentary (yeah right). (Shut UP!)
Wunderkind Mit Wunderwagen
The day after arrival in London, I got on the train to Darlington. Darlington, for those unfamiliar with the geography of the British Isles, is not that far from Newcastle, the place we are always talking about taking coals to. From Darlington, I took the milk train (the conductor stepped out of the first of 2 Brio-sized cars and said, ‘Go on and get on, now.’) to Emmaville. (The sign doesn’t actually say Emmaville, but it should. It would make it easier on us knitblog groupies making pilgrimages to the Early Original Knitbloggers.) The ride to Emmaville was about half an hour, and then I walked from the station to Emma’s house–3 or 4 NYC blocks or so. I went the wrong way but luckily I was wearing the Conspicuous Pink Jacket so Emma spied me from her doorway and yoo-hooed at me. (It’s a little disorienting to be yoo-hooed at by someone who ordinarily yoo-hoos atcha by email.)
We hunkered down and talked nonstop for 24 hours. Pausing to ritually exchange yarns (it was my BIRTHDAY that week, y’all ) according to the Ancient Rites of Knitblog Sisterhood, to eat some paella and to sip some Cava (my BIRTHDAY was coming up, you know). There being a 6-year-old in the house, a major wing-ding was made to celebrate my UPCOMING BIRTHDAY. 6-year-olds think everyone should be hugely excited over their birthday. (48 year olds, not so much.) It was great fun. I got, in addition to amazing HipKnits silk yarn for my next Shawl Endeavor, an extraordinary beaded handknit, which soon will have a mate. (Are you knitting right now, Emma? How about now–is it done yet?)
The highlight, though, was a sunset Hippo-Guided Tour. Without further ado, I give you A Boy and His Hippo: 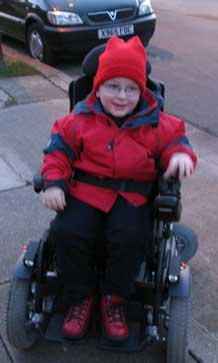 Oliver at the controls. 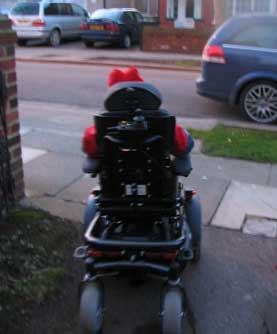 Here we go. Let me just say that Oliver likes to go FAST. Luckily there is a parental override setting so Allan could reset the maximum speed slow enough for the old folks to keep up. 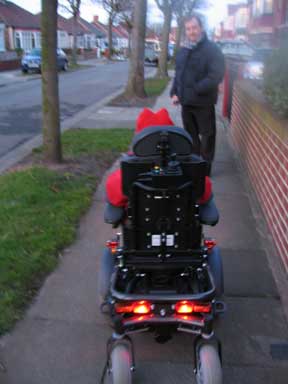 Note the taillights are on. Allan noticed that Oliver had programmed the indicator lights to automatically blink as he turned left or right. Disbelieving, I said, are you sure he did it himself? Allan was sure–because he had no idea, himself, how to do it. 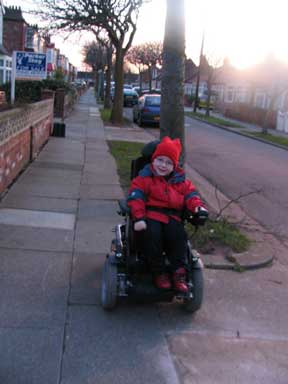 The great thing about being in the driver’s seat is that you can go where you want to go. Even if you want to go off-sidewalk. Oliver is a big believer in the longest distance between two points and the road less travelled. It’s more scenic that way. 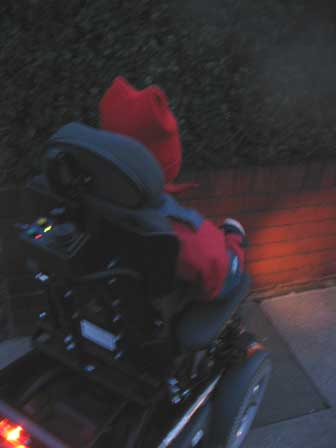 What fun to get EXTREMELYCLOSE to a brick wall. The better to examine the shadows cast by the headlights. 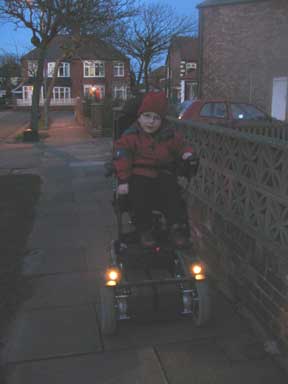 In the gloaming, Oliver demonstrates one of the Hippo’s coolest tricks: making a boy VERY TALL.
My heart was (is! will always be!) very full at the thought that the online knitting community contributed so freely to the fundraising for this amazing buggy. (They still need a pricey gizmo for the car so that Oliver can get more use out of the Hippo, by the way, so Oliver’s Fund is still accepting contributions….just saying.) This machine opens worlds to Oliver. He is at the age of exploding independence. To see him driving such a complicated piece of machinery is nothing short of gobsmacking–but then, being a 6 year old boy, he could easily land a plane, I’m sure, given the chance to push buttons and wiggle thingies for a few minutes. Thank God for 6 year old boys and their steely determination to make stuff GO.
Okay, I’ve run out of time and/or energy and I’ve got LOTS of Loop photos to post. So I promise, TOMORROW. 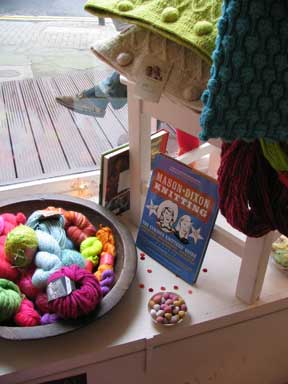 Here’s a taste.
See ya tomorrow. I’ll yoo-hoo at you in person.
Love, Kay