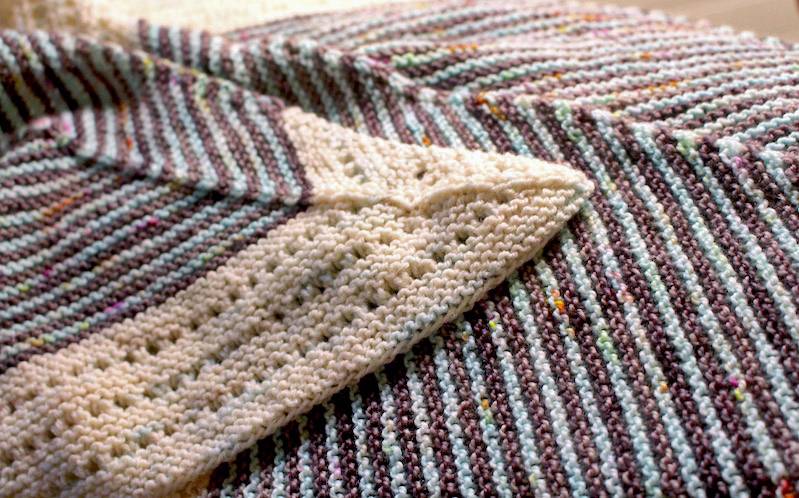 No Comments
Projects / In Progress / Let Your Speckles Shine

Oh, this is excellent.

Ambah O’Brien‘s Annisa wrap has got me in a bad way—three yarns, a lot of easy knitting, and that great double decrease running right across the whole thing, just enough to bend the stripes and be sort of thrilling in that low-stakes way that knitting often is.

The gray is called Dark Cavern.

The blue is Whizz Bang.

I admire them both! I have been a hesitant passenger on the speckle bandwagon, but I’m having a swell time now, speckling like there’s no tomorrow. I think this Annisa pattern is a great way to channel a lot of color splats into a coherent knitted thing.

The third color isn’t really a color. It’s a sigh.

This is Fleur de Fiber‘s Crescent yarn, a superwash merino in a special color made for Nashville’s beloved Haus of Yarn.

I bought this in what was surely the most unusual retail location possible: the basement of the Opryland Hotel, in the Haus of Yarn’s Yarn Bus which was parked on the show floor at Stitches South. AWESOME. Thanks, Meg, Kelley and the gang for parking in such a convenient location.

The colorway is one of several named for Nashville landmarks. This is called Parthenon. Nashville has the world’s only full-scale replica of the old, broken-down Greek Parthenon. Hubbo and I celebrated our rehearsal dinner inside the fake Parthenon. I am happy to buy yarn made in tribute to our fake Parthenon.

This yarn is the most restrained hand-dyed yarn I have ever seen. I admire Angela Combest’s light, light touch with the pale blue. When I bought this, I had no idea what I’d do with it. But I was very curious to see how such a faint bit of color would look when knitted up.

It looks wonderful. Rumor has it that Angela is taking a break from dyeing yarn. I hope it’s not for long—anybody who would lay such a pale single color on a skein of yarn needs to keep doing this.

Oh, the finish line. I’m having flashbacks to finish lines of my past, the few times I managed to get my schnozz together to tie my shoes, show up on time, and hit the start line along with all the other better trained, more stalwart contestants.

I never won a race during my brief cross-country career. I think I finished last at least once, or so far in the back that I commiserated with the runners who were faking injuries.

I crossed the finish line today on this Annisa Wrap.

These bias garter stitch asymmetrical wrap projects are such a breeze.

A fine, asymmetrical, three-color wrap with that double decrease running right across the length of the thing.

I bound off the end, feeling a little smug. Such a smooth run! No cramps, no fake shoe-tying to catch my breath. And then I saw something. I have marked it with a Clover Removable Marker so as to make it clear that Something Is Very Wrong.

One dropped stitch, the result of a failed increase. I can’t believe it didn’t unravel.

I am feeling like The Idiot Knitter right about now—I’m limping to the finish line with all the injury fakers.