84 Comments
Letters / Into the Rabbit Hole

Into the Rabbit Hole 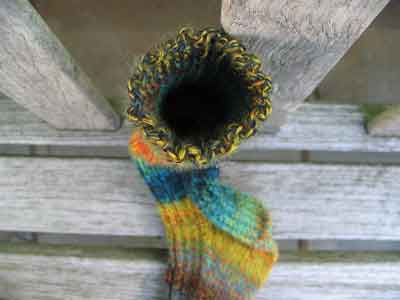 Dear Kay,
Heaven help me, I’m making a sock.
As you might know (seeing as how you were sitting beside me most of the time, knitting mitered squares), I’ve been on a little odyssey this spring, spending a fair amount of time in beautiful yarn shops filled with beautiful yarn. While you were focused on your project with that freaky, laserlike focus, I had nothing. A scarf, another scarf, part of a scarf. A piece of knitting with no destiny. It made me really susceptible, really vulnerable to the knitting that was going on around me.
I kept running into people who were knitting socks. Everywhere I looked, I saw socks, and sock yarns, and happy sock knitters, all of whom exuded this nutty socky vibe. Socksocksocksocksock. Those tiny needles looked so inviting, so very much my cup of tea. Cabled socks, socks with beads, big socks, little socks, every where a sock sock.
But in my years of knitting, I have always resisted knitting socks. It seemed just TOO humble a use for something you make yourself. A dishcloth? I can get behind that. But a sock, with thousands of tiny stitches? That you walk on?
Stephanie enabled the situation when she climbed into my car in Nashville, lobbed a skein of Fleece Artist merino sock yarn at me and yelled “THINKFAST!” I was like a seal going for the fish. I carried that thing around the house the way Linus drags his blanket. Once I had officially sanctioned sock yarn from Canada in my possession, I knew it was only a matter of time. 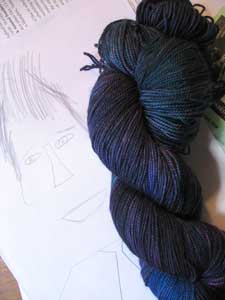 I bought sock yarn in Philadelphia at Loop. But I didn’t buy needles. Circular or double points? I knew I had to decide, but I didn’t really know which way to go. People have strong opinions about this issue. By the time I got to Kansas City, Leslie was handing me a copy of Cat Bordhi’s slim and elegant book. And some Size 1 Addi Turbo 24″ circular needles. And pointing me toward the sock yarn department.
I could barely wait to get back to the hotel room to start a sock.
You learn things when you knit a sock. Like, why is it that people on knitting blogs are all the time taking pictures of their feet with half-finished socks on them? Why is this? Now that I am knitting a sock, I know why. It’s because of this: 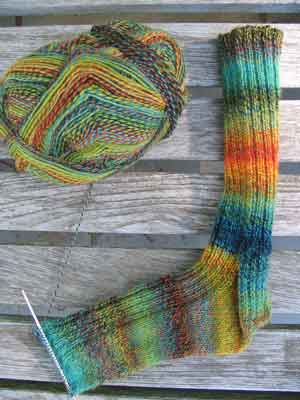 This is a sock not on somebody’s foot. It is the most deflated, uninspiring thing I’ve ever seen. OK I’ll say it: it’s flaccid. It IS.
(By the way, I just remembered where I learned about THAT word. Remember The Thorn Birds? Remember THAT book? That mini-series? That whole Australian outback/sheep station/Catholic priest/forbidden love deal? Flaccid’s in there. It has to do with Our Tortured Hero Father Ralph de Bricassert, but that’s all I’m going to say. You can buy the book on Amazon for one penny, and if you’re in the eighth grade the way I was when I read that book, you are going to learn a LOT.)
So far I’ve discovered the joy of turning the heel, of picking up gusset stitches, gusseting, and screwing up. I’ve learned that sock knitting at night–the heel bit, I mean–is like doing Sudoku at bedtime. After about two minutes, you go aw hell I’ll just wing it, but then you discover that winging it is not so great, so you chuck it across the room and konk out. The good news is that your sock is waiting for you the next morning, when you’re fresh as a daisy and ready to tink out your boo boo. 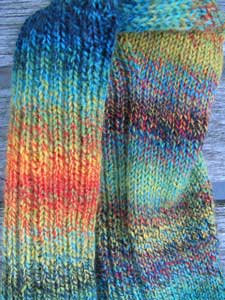 Another thing I learned: some sock yarns don’t repeat; they rhyme. This Trekking XXL yarn is kind of nutty, but as you reminded me when I was casting on, “You don’t want to knit a sock that looks like a store-bought sock.” Small chance of that.
Anyway, I’ll finish up the toe part soon and let you know how it goes. I’m game for double points, for toe up, for the whole shmagilla. I’ve got it bad, and that ain’t good . . .
Love,
Ann
PS Can you tell it’s our 16th wedding anniversary? I think we’re up to, like, the polyester anniversary. Happy anniversary to everybody else who is celebrating today. Yay mahwidge!