Waiting on French Mustard 363 has given me time to reminisce, to think deep thoughts, and to contemplate how to modify perfection.

I can’t believe how long it’s been since the evening I heard Kaffe Fassett speak at the Fashion Institute of Technology, and got to meet him briefly. The pictures are awful, but the memory is clear. I took so much of what he said to heart. Especially the part about the color wheel. 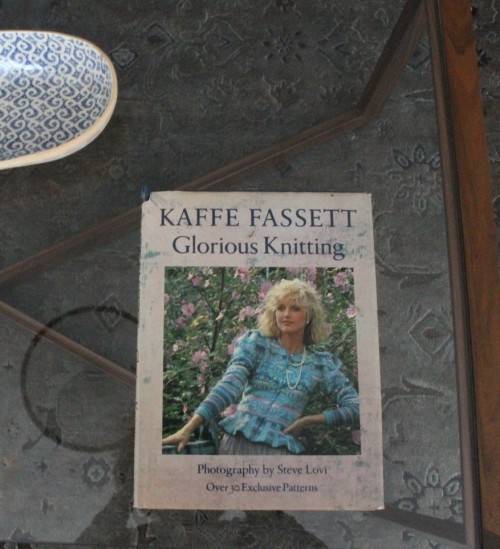 Reminiscing led me to unearth my copy of Glorious Knitting, Kaffe Fassett’s 1985 book, which has the Big Flower Jacket pattern in it under a different name, Damask Flower. 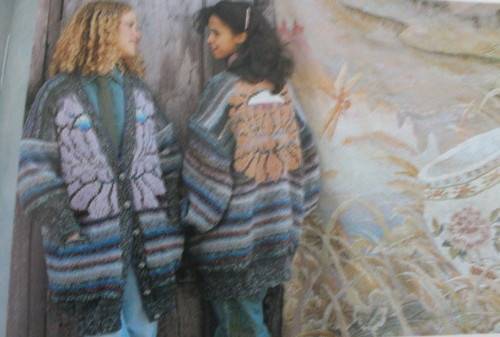 It’s lucky I have the book, because the pattern that came with the kit doesn’t show the front of the jacket. (Thanks, circa 2002 me with the eBay habit!)

The book also includes some notes from Kaffe that were not included with the kit pattern. For example, Kaffe writes:

“The idea of a huge dominating central theme is inspired by Japanese kimono designs. In particular, I like the way the Japanese split a motif down the middle, as I have done on the fronts of the jacket.”

Kaffe also points out that the Damask Flower motif itself originated in a fragment of 18th-century Spanish silk damask that he saw in a book called Textile Collections of the World.

Glorious Knitting is a treasure trove of Kaffe-ness. It’s all in there, so many patterns that Kaffe has continued to reference and reimagine over the decades: Persian Poppies! Stars, diamonds, ikat, and the “Carpet Pattern” that looks like a vintage kilim. It’s fun to look at this work from 1985 with the knowledge that Kaffe later went on to design print fabrics and quilts: the patterns are all of a piece. He is always interested in the same things, and they are always interesting. 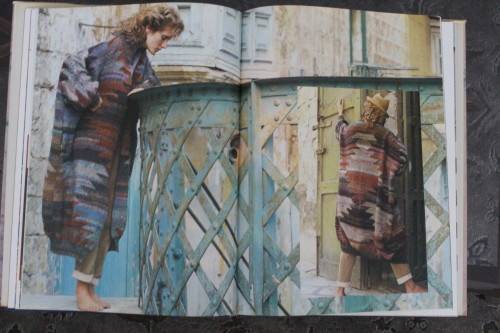 (Did these coats not look just a little bit big at the time? Was there something wrong with people’s ability to perceive scale?) 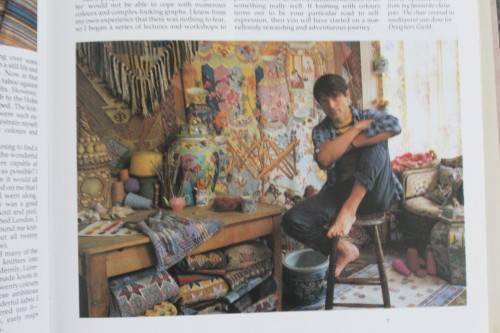 And can we just gaze upon the this handsome face for a moment? 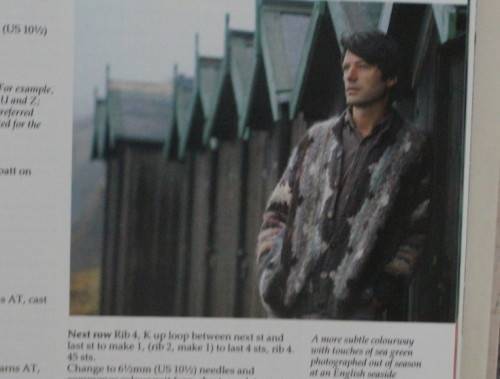 And the beach huts? I do love a row of beach huts.

When I cast on my Big Flower/Damask Flower jacket last weekend, I had decided to knit it according to the pattern, in all its historical accuracy. But commenters made some suggestions, and since I was stalled out waiting for my French Mustard 353, unable to just blindly knit on through all misguided fashions, I listened. I’m going to make two modifications.

First off, I’m not doing to knit the back first and then knit the fronts down separately from the shoulders. That would require absolute precision in replicating the stripe sequence (upside down), and it would also result in three times as many ends to weave in at the sides of  all those stripes. Instead, I’ve cast on enough stitches for the fronts and the back together. I didn’t fuss with subtracting any seam stitches, as I’m planning to work an Elizabeth Zimmermann “phony seam” down each side so that it has a nice fold there. This will save me so much checking and double-checking that I’ve got the stripe sequence correct on the fronts, not to mention the tedium of matching the stripes when sewing side seams. And I think a seam at the shoulders will be a good, sturdy thing. 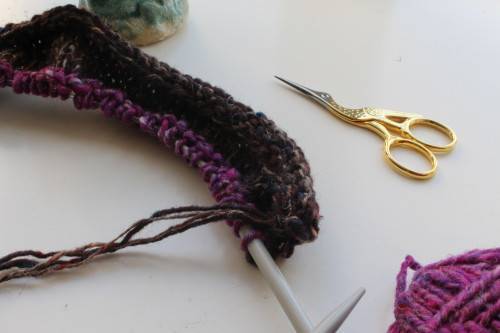 My second change is even more out of character for me. Reader Vicki R. emailed me to suggest that I take a look at a Ravelry page where a knitter had retrofitted another oversized 1980s Kaffe sweater, the Kilim Jacket, to eliminate the ribbed band at the bottom that pulls the sweater in, to unflattering effect. So I wandered over to DrWittyKnitter’s project page, where I was gobsmacked. Faced with a gorgeous sweater that she didn’t wear because of its ungainly shape, Mary-Helen “cut off the bottom bands, letting the oversized style swing free.” What a difference. Mary-Helen’s project page helpfully shows how she inserted a circular needle above the bottom ribbing on the jacket, cut off the edge, and then knitted a stockinette facing, which she sewed down to form a hem at the edge of the jacket. What a transformation. I knew I had to do it.  Thank you, Mary-Helen! Your clever engineering saved me from sack-of-potatoes syndrome. 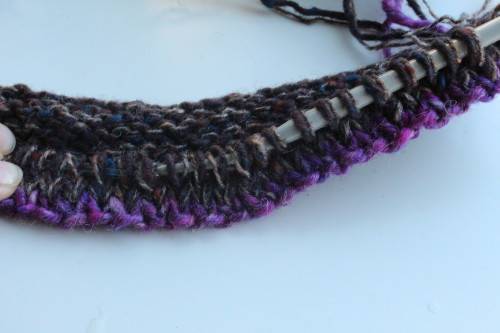 Here is my hem.