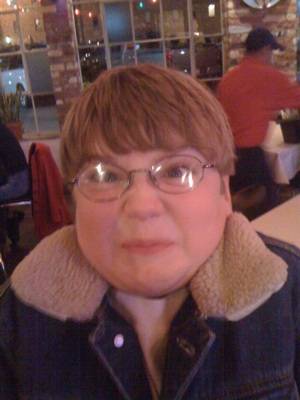 Dear Kay,
It’s 5:07 am, and I was awakened by the racket of every bird on this mountain. I was lying in bed, minding my own business, when this one really naggy-sounding bird let it fly from what sounded like two feet away from my head. Now, it wasn’t in the room as I had thought as I woke up thinking Bird In My Room, but it woke me up so thoroughly that now I am in deviled egg mode. I need to get deviled eggs ready before lunchtime. I gotta start boiling at some point soon. And now that I am 100% completely AWAKE, I’m wondering if sweet relish is really the awesome, crucial ingredient that my deviled egg consultant says it is.
I’ll give you a report back. Somehow, I’m thinking that dill would be the ticket, but there is no dill up here in Grundy County that I can find.
I’m sorry to have been such a sorry correspondent this summer. Somebody ought to write a Balky Computer blog entry, just a generic wail, so that we could all simply link to it when we each have our inevitable reckoning with The Apple Guy On The Other End Of The Phone. It’s boring to write about, so I won’t, but I’m surprised at how frustrating it has been. Do I actually care that much about having my laptop during the summer? Yes, it turns out, I do! How can I live in the real world if I don’t have my little parallel world where all the knitters are?
One Problem Solved
One blogbustin’ problem has been my lack of camera. Which means I can’t show you what I’ve been knitting. Now that I have my computer back, with a new, blank operating system, I just discovered that one of David’s friend’s iPhone pictures somehow mysteriously landed in my computer, so I’ll share some of those with you.
1. (up top) Who is this kid? What are you doing in my computer? 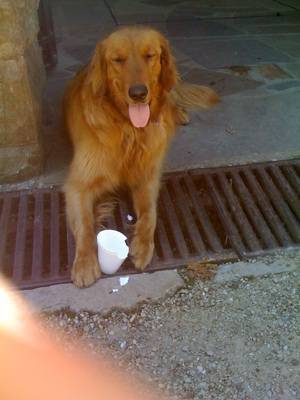 2. Dog on the verge of eating a styrofoam cup. 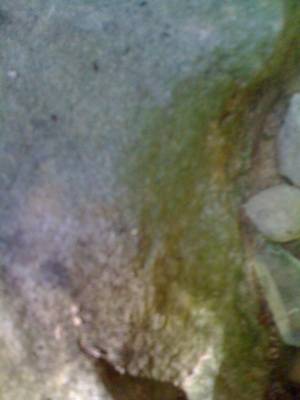 3. Blurry rock, probably taken on a nature hike. Possible weird bug in there somewhere that prompted the photo. 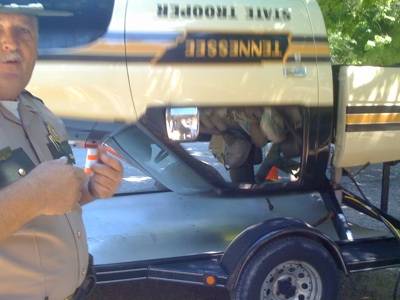 4. Trooper guy at Safety Day here at the Assembly. The Upside Down Car Demonstration was actually great: it spins around and around and throws out the dummy who didn’t have his seat belt fastened.
What Has Been Going On
We’ve been in Monteagle for almost three weeks now, at our shack in the woods, and it’s going well enough up here. I have a job this summer, president of the Woman’s Association, which means that when my phone rings, which it never did up here before I was assigned this job, it could be absolutely anybody in the whole Assembly, asking any sort of question having to do with the Woman’s Association. It makes me feel very popular and important, even if I don’t really know where to get a Grundy County Vendor Certificate for the woman’s bazaar in three weeks. Or where we should keep the leftover fabric for the new porch cushions for the Woman’s Association library.
I spent one day trying to make sense of the collection of books in the Woman’s Association library. They were sorted Hardback and Paperback. Which meant if you were looking for a Judith Krantz novel (of which we have four, including Scruples Two which is no Scruples, let me tell you), you’d need to check in two places. In the interest of making it easier to find your next Phyllis Whitney (of which we have eleventy four billion), I blew up the library and sorted all the books on the floor by author. I went totally OCD on this project, into a tunnel-like zone, and emerged with all the fiction in alphabetical order. There was, of course, a Thorn Birds in the edition I read back when it was published, and all the John le Carrés my mom loved. It’s pretty much a museum of the ’70s, kind of dispiriting if you ever think it would be fun to write a novel. Such a graveyard!
The Shack of Usher
It’s 5:40 now, and there it is: the morning tapping sound. Somewhere in the walls, every single morning, I hear an irregular tapping sound: tap, tap . . . tap tap . . . tap tap tap, followed by a brief sound like small claws scratching up a wall. It happens only in the morning, in a part of the house I can’t pin down. It really does feel like a Poe story. And NO, I did not wall my sister Buffy up in the kitchen or anything, I promise.
Anyway, sorry to ramble. Off to boil eggs. Happy fourth of July, everybody! I’m feeling very tender about the U.S. of A., feeling grateful for all the freedoms I tend to take for granted. Go read the news these days, and it’ll make you appreciate how lucky we actually are. Even if we do have unidentified and creepy tapping in the walls. And no dill.
Love,
Ann