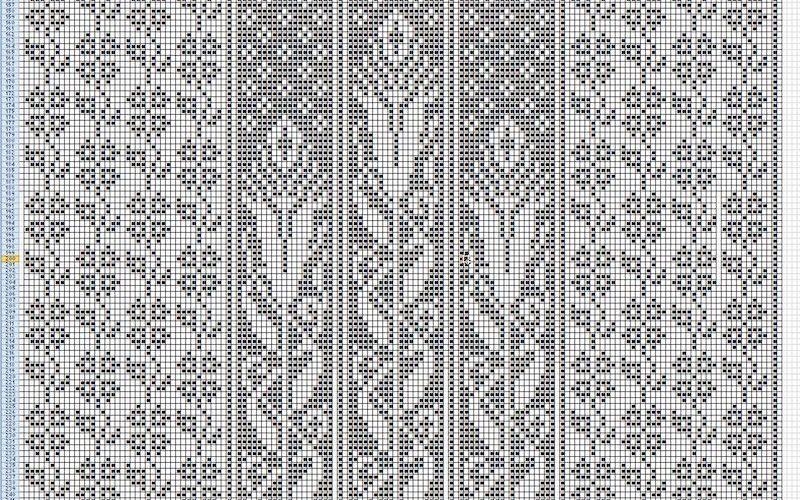 25 Comments
How To / Techniques / A Colorwork Jacket, Part 1: Wendy’s Way

Master knitter Wendy Johnson knits stunningly complex patterns as if they are plain stockinette. Wendy has a no-nonsense, full-speed-ahead attitude that we admire and wish to emulate. We want to be Wendy when we grow up. In the series that begins today, Wendy takes us from the first concept of an over-the-top colorwork jacket, through the nuts and bolts of charting and knitting it, to the finished—breathtaking—garment. Fasten your stitchmarkers. Prepare to wish you had a bale of Wollmeise to play around with. It’s going to be a heckuva ride. (Also: “Art Deco-y” totally is an adjective.)

And sometimes it is Microsoft Excel spreadsheet software.

Apart from knitting, one of my favorite pastimes is charting colorwork patterns using Microsoft Excel. I learned early on that one can easily adjust the cells on a spreadsheet to make electronic knitting graph paper. I can (and do) spend hours happily charting colorwork patterns. Some of these patterns I find in vintage pattern booklets, some I alter to suit my taste, and some I create.

All of this charting has led to me designing and knitting over the past few years a series of colorwork cowls that used a variety of different colorwork charts. All were great fun and very satisfying, but I wanted to take things a little further. This past spring I started thinking about a colorwork jacket. I wanted to knit an outerwear garment in an all-over colorwork design. A fan of Nordic knitting, I searched for and found a chart I liked in a vintage Scandinavian mitten booklet. So I fired up Excel and started charting. This was what I came up with. 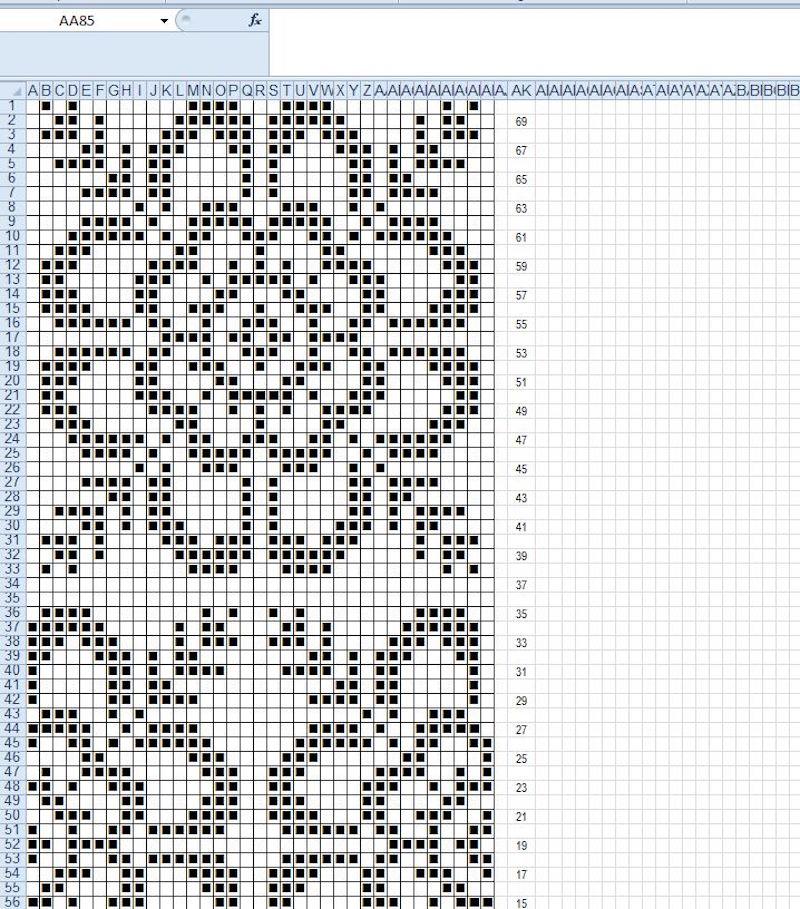 I like the single flower motif. It’s pretty, but I thought that I’d get bored pretty quickly knitting the same flower over and over. It was around this time that I discovered that there are many, many old charts on Pinterest. So Chart Number Two was created. 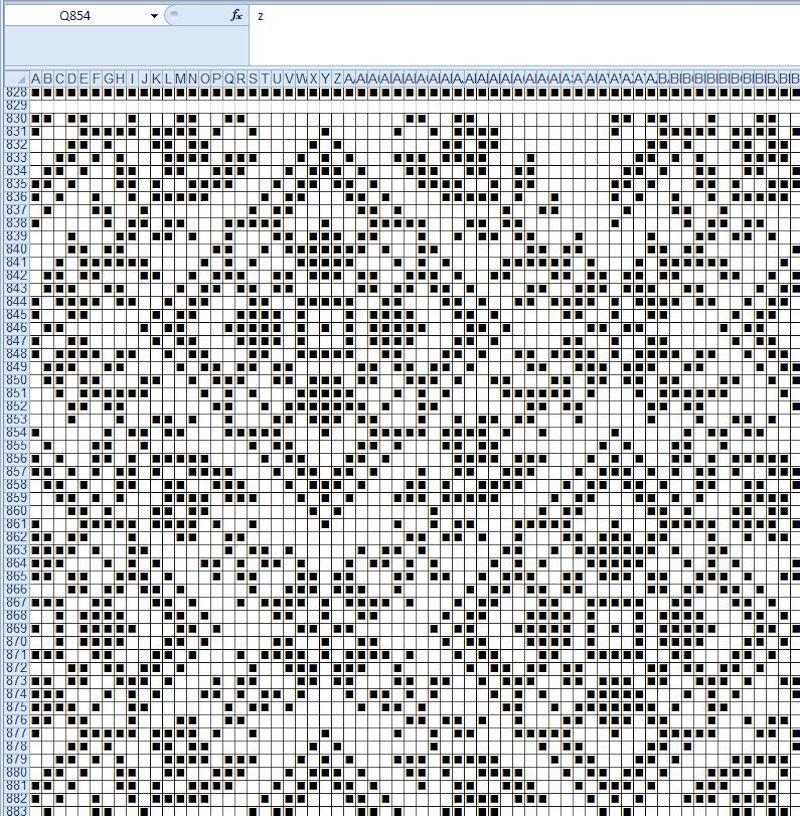 Nice . . . but not quite. Chart Number Three soon followed. 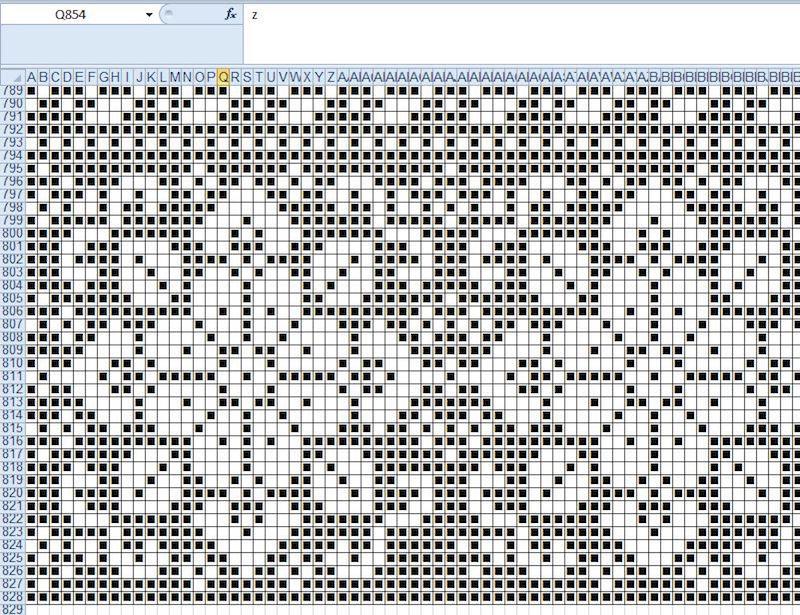 I still wasn’t feeling it. I created Chart Four: 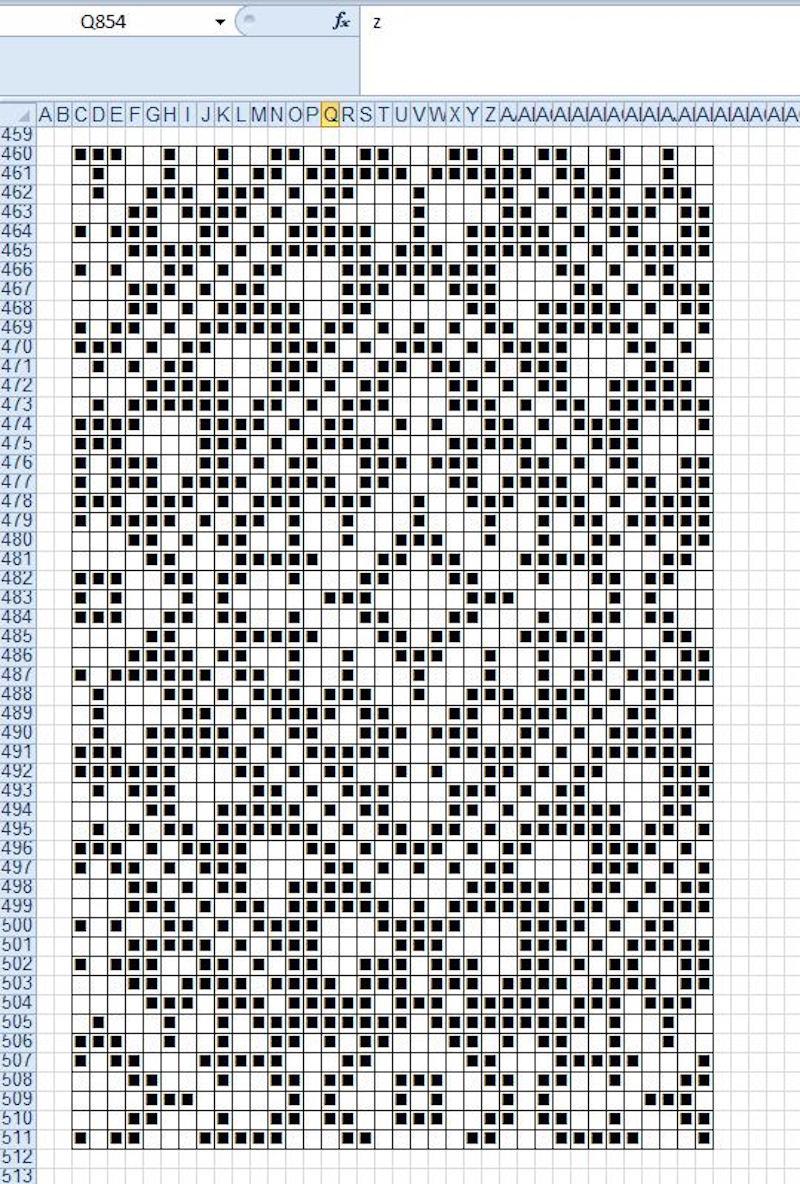 Maybe this was a little too busy? At this point I had narrowed down my yarn options. I decided I wanted to use Blend, the newest yarn from the genius dyepots of Wollmeise in Germany. Blend is a sportweight yarn comprised of 70% Merino, 20% Cashmere, 10% Nylon, and it comes in a giddying array of colors. And I wanted lots of colors!

Late one night in July I was scrolling through Pinterest and I found an old chart that grabbed my attention. With a lot of tweaking, it became my pattern chart. 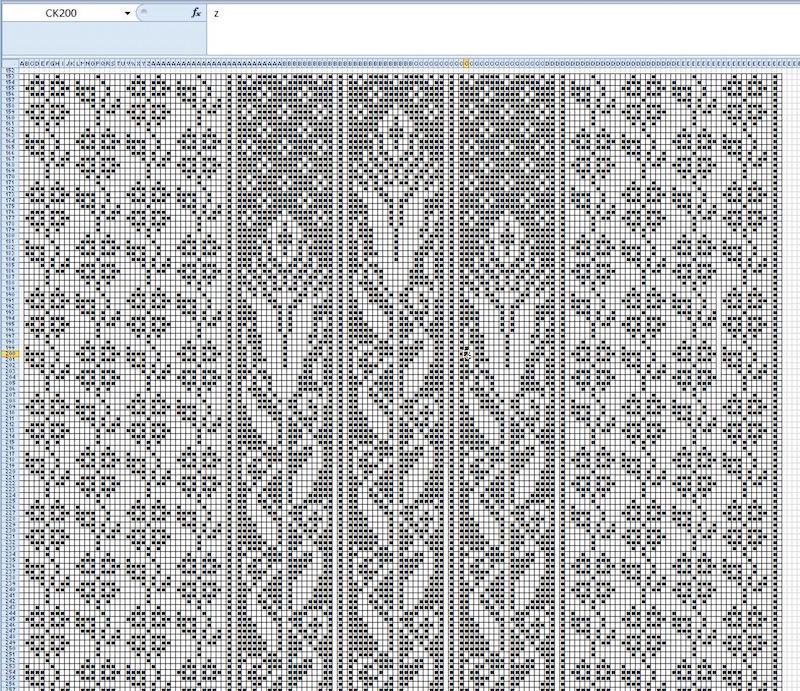 Next I needed to create a pattern that incorporated this chart. I wanted the Art-Deco-y looking panel in the center back, as well as on each side of the front bands. I wanted the smaller motifs filling in on the sides and a border all around the bottom hem.

This is why I love Excel. You can make a chart whose size is limited only by the extent of your imagination . . . and the size of your computer display. I could get a good feel for what the entire back of my jacket would look like by doing this: 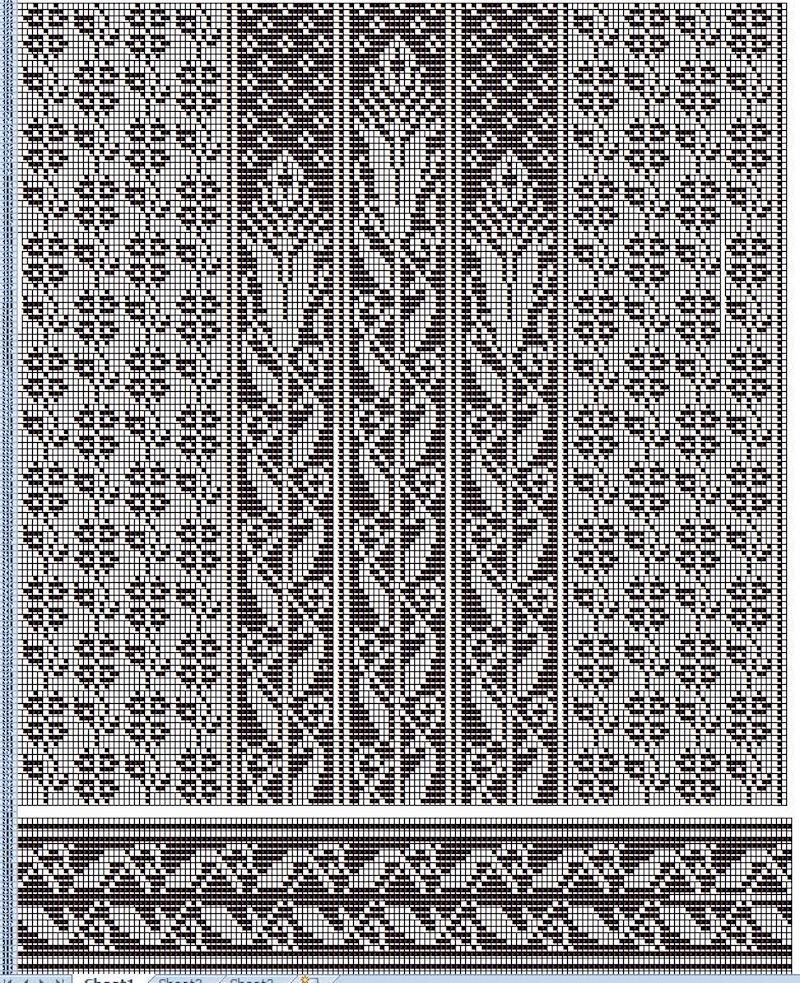 I believe “less is more” when it comes to shape for an intense colorwork garment. Let the colorwork do the talking, and keep the shape simple. I decided on a kimono style jacket with dropped shoulders.

A quick colorwork swatch gave me stitch and row gauge for my design, so I figured out how many stitches around I needed for a nicely oversized jacket. I placed my motifs with relative ease: the Art Deco-y panel took up “x” number of stitches in the center back, and I filled in on each side with the smaller motifs. Same with the front, except I took out the middle Art Deco-y flower—that place would be taken up with the front bands.

I took the “stemwork” from the Art Deco-y flowers and laid it on its side to create the chart for the bottom border.

I decided that the sleeves would be just the all-over smaller motifs with the border at the bottom. I’ll deal with the sleeves later.

So, a pattern was born! Still using Excel, I created charts that I could actually knit from.

Now . . . what colors to use? I had an idea to do the background in stripes of varying shades of one color and the contrast in stripes of another. My final choice (which will not be a surprise to anyone who knows me) was browns and greens. Much ordering of Wollmeise Blend commenced.

I spent a week putting together colors and moving them around to form the most pleasing progressions of the two different sets of colors. I finally decided on this, 8 shades each of the two colors: 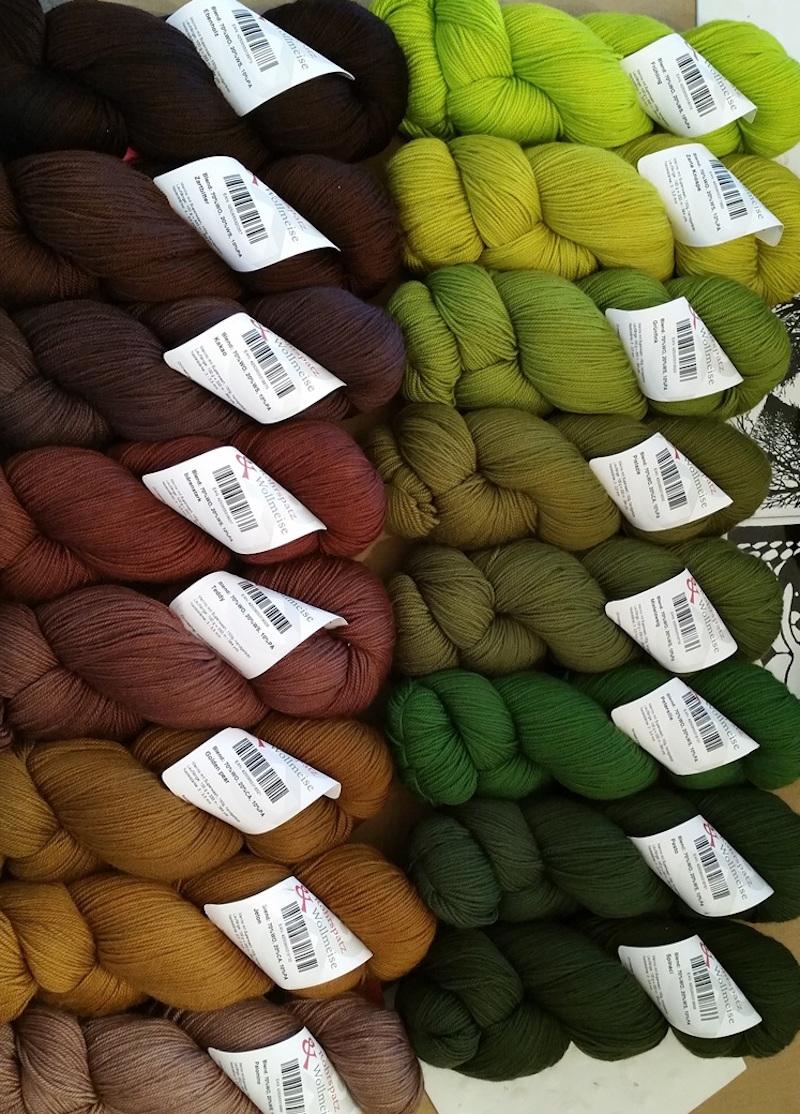 The last thing I needed to do was to figure out how many rounds to knit of each color. I wanted both the background and contrast colors to be knit in bands of color, but I did not want to change both background and contrast at the same time on the same round—I wanted the color changes of each to be offset. Each repeat of my pattern is 18 rows, so I decided on 9 rows per color. I wanted the background to be knit light to dark, back to light, then back to dark, and so on. For the contrast color I would do just the opposite: dark to light, back to dark, back to light. I assigned numbers 1 to 8 to the background colors from light to dark, and letters A through H to the contrast colors from dark to light, and after a lot of fiddling around, came up with a chart for when to do the color changes.

Pattern charts and color shift charts in hand, I was ready to start knitting!

How To
Color: A Cheerful Guide for Knitters
0 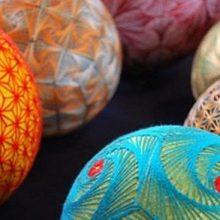