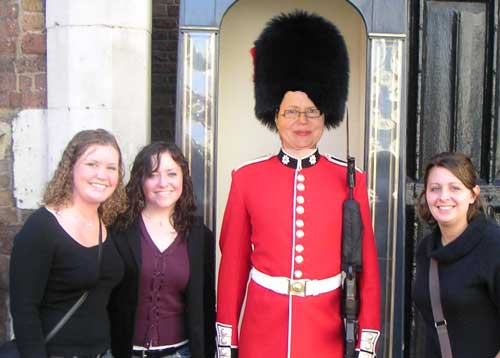 Dear Ann,
PHEW! That was almost a DISASTER.
So I got my Buckingham Palace guard disguise all set–the Obamas were due to meet the Queen this afternoon, so I’m right there in the mix with all the guys with the hats and the rifles and such, and I’m doing my turn at the little station house thing, laying on the best accent I can muster. All “la-ti-da” and “Bob’s yer uncle” and “bits and bobs.” The Obamas were scheduled to drive right past me, at which point I was going to march right in and hang out with them and stuff.
And THEN. These three girls come up to me and are all, “Aren’t you KAY GARDINER?” One of them was all “You ARE! Remember? We stood around in the freezing damn cold drinking ice-cold BEER at that Ravelry party at Rhinebeck! You stole my goody bag, right?” And I’m all thinking, DON’T TALK. YOU’RE A PALACE GUARD. DON’T EVEN BLINK. And one of them says, “I hate dishrags. Why would anybody knit a dishrag?” which of course are FIGHTING WORDS in my book, and I just about blew my beaver hat when THANK Elizabeth Zimmerman the motorcade comes blasting up, and the girls all turn and start making googly eyes at the President, and I’m off the hook.
More later. Glad this rifle wasn’t loaded; that girl has no idea how close she came.
Love,
Kay