22 Comments
Letters / Clip & Save: How to Evenly Space Buttons

Clip & Save: How to Evenly Space Buttons 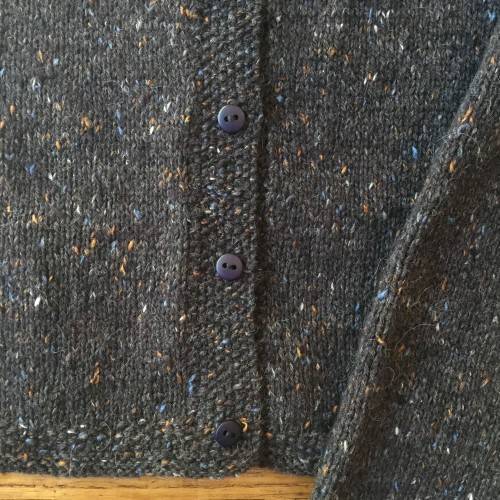 One of life’s perplexing questions is how to do a good job when a cardigan pattern instructs you to “evenly space” the buttons on a button band. Patterns tell you to do it, but they don’t tell you HOW to do it. 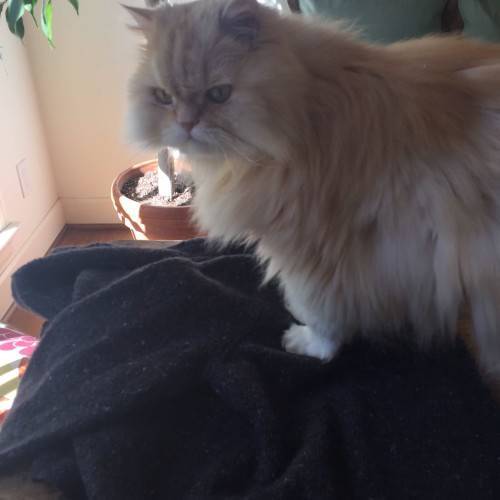 (Elliott is perplexed, not by button spacing, but by the delicate aroma of terrier on Big Lady’s handknit.)

I’ve developed a way of doing it. I’m not saying it’s the best way, but it works for me.  Maybe it will help somebody who is stuck on this final phase of a cardigan–when you’re so close to the sweet finish, but tempted mightily to put off that even spacing chore and cast on something new.

(An important note:  these instructions are for button bands that are knit vertically, in rows. This is the style of button band that Rowan patterns–and others–typically prescribe. These instructions will not apply directly to a button band that is picked up along the edge of the cardigan and knitted on sideways, where you have stitches between the buttons instead of rows–but the logic will be the same; just count stitches instead of rows.) 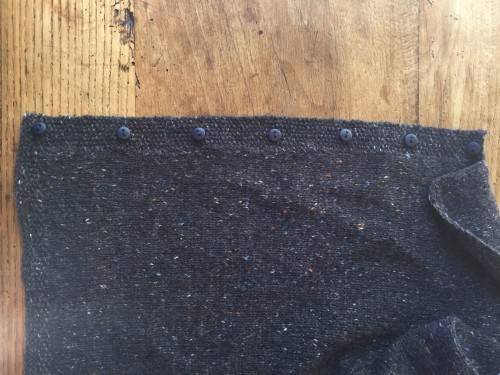 OK. So you have a button band. The pattern usually tells you how many buttons to put on this button band. Let’s say that number is 7.

Before doing any calculations, place the top and bottom buttons. If there is a neckband, you can center the top button in the neckband, or you can place it a half inch (ish) from the top edge of the button band. Put it where you think the top button should be. For the bottom button: if there is ribbing or other edging at the bottom edge of the cardigan, center the bottom button in this edging, or place it a half inch or so from the bottom edge.  Mark these placement points with a locking stitch marker or safety pin. Place the pin/marker carefully in a specific row of the button band (not between 2 rows or over 2 rows).

Now all you have to do is figure out how to evenly space out the remaining 5 buttons between the top and bottom buttons.

The number of buttons is B.

Divide C by the number of spaces between the buttons (B + 1).

The result is the number of rows between the buttons.

For practice, let’s do this calculation on a button band where there are 65 rows between the top and bottom buttons.

Now divide C by the number of spaces between the buttons. In our example, that’s 60 divided by 6 (B is 5, so B+ 1 is 6), which equals 10. So, in our example, there are 10 rows between each button. Now it’s just a matter of counting 10 rows from the bottom button, placing a pin in the next row (not the 10th row itself, the next row), then count 10 rows and place a pin in the next row again, and so forth.  (Each button gets placed on its own row. That’s why we substracted one row for each button before we did the division.)

What if your button band doesn’t come out with a neatly divisible number of rows? In our example, if the number of rows on the button band were 67 instead of 65, after subtracting 5 we’d have 62, and after dividing 62 by 6, we’d have a remainder of 2 extra rows. (Shout-out to my fourth grade teacher, Mrs. Tyler!) Here’s where you have to fudge a little by distributing those 2 extra rows in a not-noticeable way. With only 2 extra rows, I’d put 1 extra row in the space below the top button and one extra row in the space above the bottom button. If I had 4 extra rows, I’d place one in each of the center spaces and not in the top and bottom spaces. Knitter’s choice: as long as you’re not putting all the extra rows in a single space, it’s not noticeable.

Hope this is helpful. If anybody has a more straightforward way to do it, I’m all ears!

PS Don’t forget to sew on the buttons once you’ve figured out the spacing–this is another dangerous Project Procrastination Point! Avoid! Avoid! A finished sweater is just around the corner!