Clip ‘N Save for Miterheads 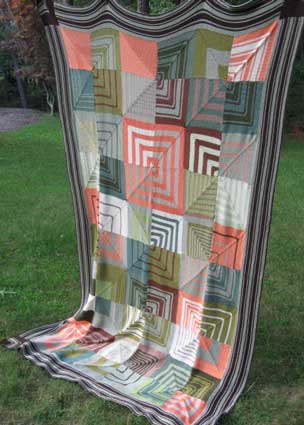 Dear Ann,
Eventually the sun came out long enough for me to take a bunch of pictures of my latest chef d’oeuvre in the genre of square knitting. My inbox has been full of how-to questions, and I’m hoping to answer them all in this post. For those who have no interest in the intricacies of the art of assembling a mitered square blanket (and what is wrong with you, anyway?), this post guarantees a solid snooze. Rest your eyes, or read on.
Overview: In Which We Contemplate the Wonder That Is the Mitered Blanket 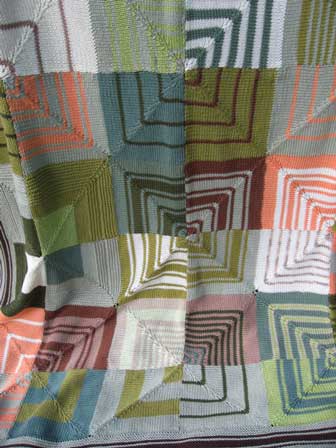 Intrepid miterheads know the basic recipe for this or any other mitered square blanket: knit a bunch of miters; sew or otherwise join them together in a pattern pleasing to the eye, and stick a border on it (or not). This blanket used the same stockinette miter recipe used in my previous blanket, which starts by casting on 72 stitches. (For this blanket, I made 60 miters, knitting them together in blocks of 2 or 4 using the method described here.)
On Stripes and Striping
The first basic difference is that I did not do uniform 6-row stripes. I did use 2 colors for all of the miters, but I varied the stripe patterns a lot. As I continued experimenting, I started to become fonder of some stripe patterns than others. My favorite, by far, was the stripe pattern in the lower right corner of this picture (orange and green): 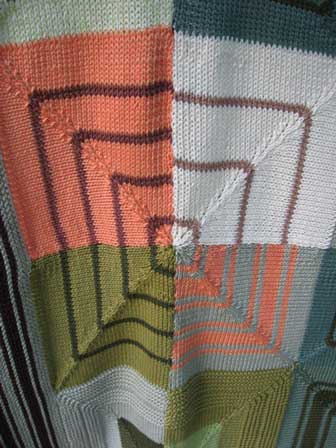 6 rows Color 1
2 rows Color 2
2 rows Color 1
6 rows Color 2
2 Rows Color 1
2 rows Color 2
It looks kind of Ralph Lauren Polo-ish, but whatever! It was my favorite so I kept knitting more and more of them until it dominated the blanket.
Another favorite was the one on the two left miters in the same picture (top and bottom). To get this pattern, alternate 10 rows of Color 1 and 2 rows of Color 2.
In hindsight, I would have done the whole blanket in these 2 stripe patterns, with maybe just a few others thrown in. The idea was to create a pleasingly varied composition, in which the eye had plenty of places to sit and rest for a second. For me, all of this is intuitive and improvisational. If I planned it out in advance, there would be no discovery or adventure in the knitting of it–it would seem like piecework, just coloring in the squares. Doing it on the fly was much more fun (although I did end up ripping and re-knitting some experiments that didn’t pan out–c’est la knitting).
The Weird Partial Garter Miter 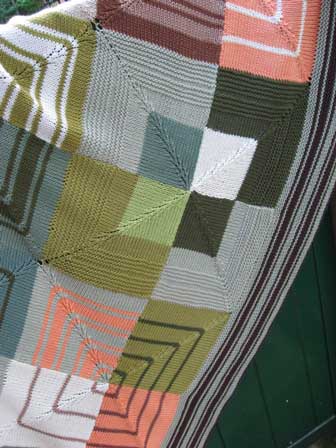 This square is composed of 4 miters that start in garter stitch and finish in stockinette, with a color change at the center. Because garter stitch and stockinette stitches are not equal in length, some jiggering is required to get this square to come out the same size and shape as the other miters. For this, we need an actual recipe. (I’m very proud of myself for writing out this recipe at the time I was knitting the squares. I knew that (a) somebody would want it and (b) once I was done knitting them, I would have no clue how I had done it.) 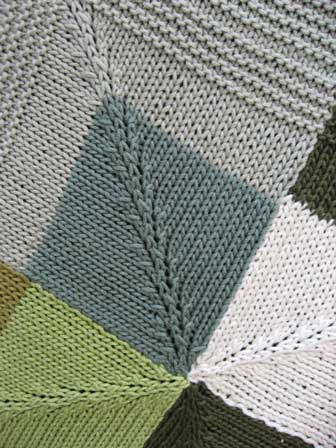 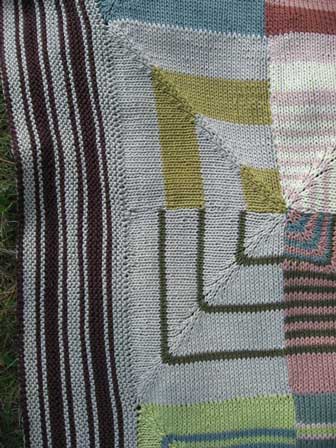 In retrospect, it seems like I totally lost my mind when I decided to do such a deep border. The idea was to mimic my favorite miter stripe pattern (the first one described above) in garter stitch, with the same number of repeats as I used in the miters. The symmetry of that, the echo, was appealing to me. I will just say this: it took a long time, and not just because I ran out of one of my colors halfway through. It took a long time because the project was absolutely non-portable by that point. It wasn’t even portable from one chair in the living room to the other chair. It was strenuous just turning the blanket to knit the next row. And the rows were long. And I was weak. Much as I love and revere The Garter Stitch– the mother stitch, the bedrock stitch of our civilization–I flagged. I weakened and picked up smaller, sleeker, zippier bits of knitting. It took a lot of Will Power to git ‘er done.
But now that it’s done, I really love it. I particularly love the little miters in the corner, which I did not think of doing until the very end. I knew I was going to miter those corners, but I didn’t know what pattern to use. I had a lot of brown and a little green, and this is what I came up with.
Recipe-wise, to do this border I picked up stitches along an edge and garter stitched in the first stripe pattern until I had done a full repeat of the stripe pattern used on the miters, then bound off. 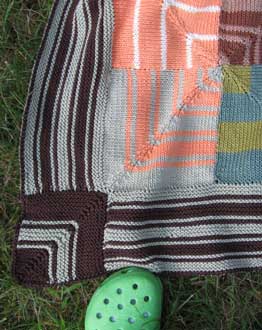 When all 4 sides were bordered, I picked up stitches in the corners (22 sts on each side), and working 2 decreases on each RS row, knitted a little garter-stitch miter in the corner, using only one repeat of the same stripe pattern.
At the end, I felt it needed a crochet edge all the way around, for tidiness. Lacking a crochet hook or the gumption to open a drawer to look for one, I “faux-shayed” the edge instead. To do this, using knitting needles, you pick up a stitch, then another, then bind off one stitch. Then you pick up another stitch, and bind off 1 stitch again. Stitch by stitch, you pick up and immediately cast off, ALL THE WAY AROUND THE FLIPPIN’ BLANKET. I’m calling this little technique “cro-Kay”. Poor man’s crochet. Lazy gal crochet. Whatever–it worked for me. (Note: When I pick up a stitch from a bound-off stitch, I pick up in the front ‘leg’ of the stitch only–not through the whole stitch. I know there are other ways, but this is the way that looked best to me for this purpose.)
So that’s it. Git on it, miterheads. Knock yourselves out!
Love,
Kay
P.S. As always, if you spot any errors in the recipes, please let me know.