23 Comments
Letters / Brenda Kay and Sheri Lynn, We Luv U

Brenda Kay and Sheri Lynn, We Luv U 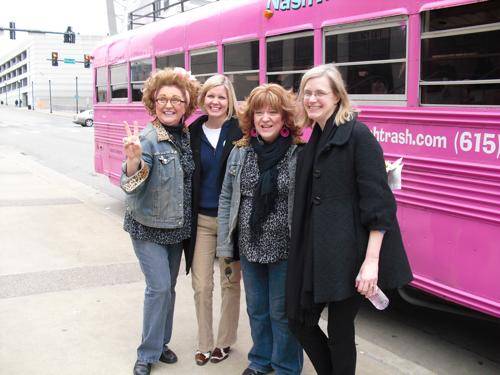 Dear Kay,
I have been colossally out of pocket this week due to the arrival of my sister Buffy plus fambly and her porta-pantry.
Buffy is on Spring Break. It’s been like Fort Lauderdale around here. Or a Princess Cruise. Or a Bravo reality show where people have to shop every single day. I still haven’t recovered from watching the finale of The Bachelor with Buffy. It was like touring Gettysburg with Ken Burns, listening to her parse the whole Vienna-versus-Tenley thing. The subtleties of it all! By the end of the show, I was Tweeting the thing like it was the end of the Super Bowl. She made me care so much.
On Monday we managed to score seats on the Jugg Sisters’ world-famous Nash Trash tour of downtown Nashville. For 13 years I’ve been seeing the Big Pink Bus around town yet only now managed to go: it was Buffy, Dad, his bride Also Ann, and me.
Our guides, Brenda Kay and Sheri Lynn, greeted the four of us on the Big Pink Bus with a stream of abuse about the fact that we were almost as late as the Weinermobile people. It was like walking into a Level 2 hurricane. As they took my credit card, in about ten seconds they managed to suss out the intricacies of my relationship with my sister as well as my dad’s entire marriage history.
The Big Pink Bus finally set off, with a lot of muttering from Brenda Kay and Sheri Lynn about the Weinermobile people not showing up. It was like some running gag, the Weinermobile thing, and Sheri Lynn swore she was boycotting Oscar Mayer baloney for at least two months.
It was pretty funny, until we looked out the back window and saw a Weinermobile hauling it around a corner, gaining fast on us. 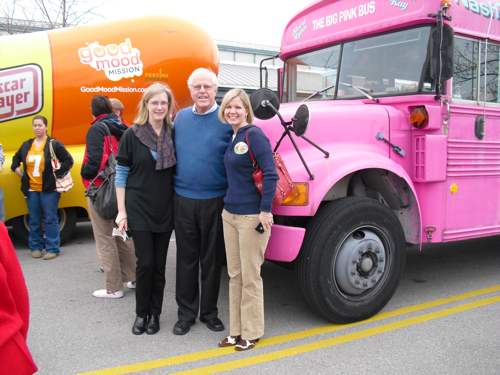 The Weinermobile was late! We hung with the Weinermobilers in the back of the Big Pink Bus, a wholesome pair who have been traveling the southeast for nine months and somehow had a need to hook up with another unlikely piece of transportation. Please notice a) the harmonic convergence of the Weinermobile and the Big Pink Bus, b) Buffy’s cow shoes, c) my Citron neck napkin doing yeoman’s labour keeping me cozy, and d) my silver-haired pappy.
SO funny. Those women are geniuses.
Love,
Ann