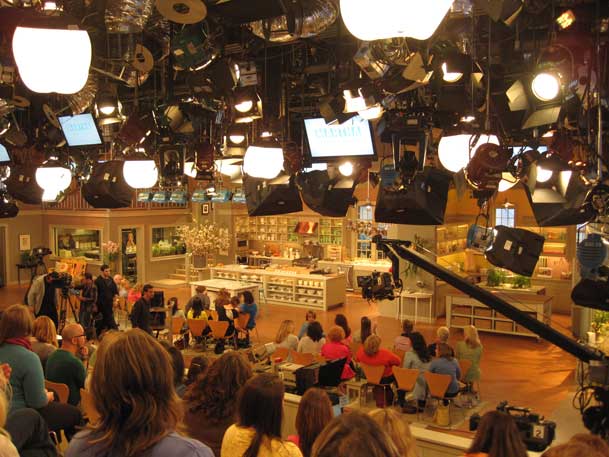 Dear Ann,
As venerable co-bloggettes, you and I are as one on certain of Life’s Important Issues and Values. There are countless situations in which I do not have to consult you to know exactly What Would Ann Do. By way of illustration:
Situation #1: Brooch Made of Human Hair, vaguely unsettling in appearance, half price, cash only. BUY. IT.
Situation #2: Come home on Sunday afternoon to faint whiff of earlier pancakes. OPEN THE WINDOWS, FOR THE LOVE OF ALL THAT IS WELL-ORDERED AND NEATLY KEPT AND TO PRESERVE THE MEMORY OF OUR SAINTED GRANDMOTHERS FROM THE DISHONOR OF OLD PANCAKE SMELL!
Situation #3: Acquaintance rings up and says, “I’ve got these tickets to a Martha Stewart Show taping and I was wonderrrr…….” JUMP UP AND DOWN AND SCREAM, PICK ME PICK ME!
So. Yeah. When my synagogue pal, Kitty, called with her second-hand, friend-of-a-friend tickets, I was all over it, like white on al dente basmati rice.
I had never seen Martha. I have subscribed to Martha since the first year of her magazine. In the days when it was really odd to see a lady with lipstick perched in a canoe (harvesting wild rice if memory serves) on the cover of her eponymous home-perfection magazine. But I had never seen the woman in person.
I had a great time. A smattering of apercus for ya:
Martha is a nice lady. Many be-headsetted young people swirl about her, buzzing and fussing. She stands still, in knife-edged khakis, heels and an impeccable blue shirt, conserving the Martha essence for the start of the show. 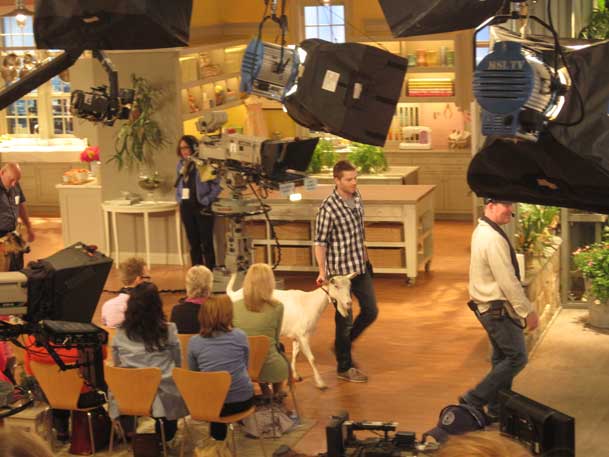 Poignant moment: A few minutes before the show, Martha standing on her mark, stroking the head of Hannah, a goat, who is waiting impatiently to be milked on national TV. There is great sincerity between Martha and Hannah. It is actually touching. Hannah was leaning so far into Martha that she nearly fell off her milking ledge. 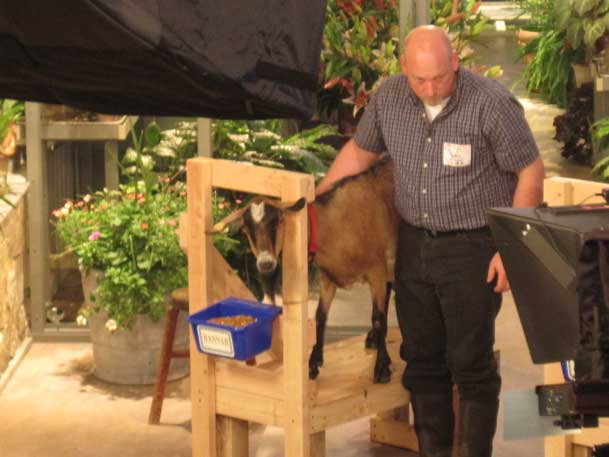 (Hannah with another person she likes, Farmer John.)
Martha is a concentrated, quiet presence. They dial up the volume on her when she speaks. 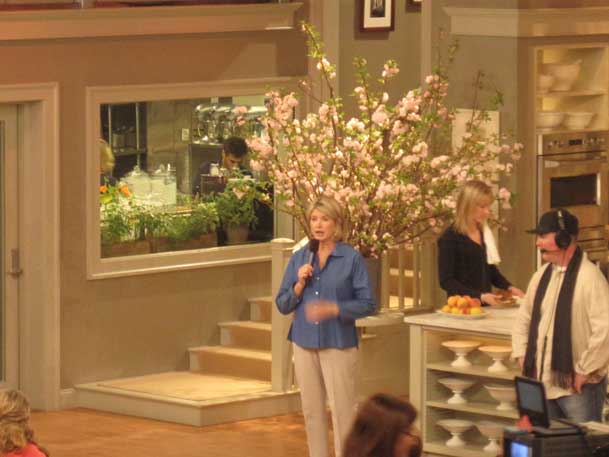 The guy who works the crowd, who I assume you know if you watch the show regularly, is hilarious, really laying on the Noo Yawk shtick. To keep the audience (all of us in solid-colored bright tops, as instructed on our tickets –“no grey, no black, no neutrals”) clappy, during the commercials he hands out treats from a giant mailbag of swag. (No t-shirt cannon for this crowd; it ain’t Nascar.) Goodies included plastic kitty-litter boxes. I didn’t get one. I was cool with that.
People really love Martha. (Why did this surprise me?) There was much tender and supportive laughter when Martha said anything gently funny or self-deprecating. The lady next to me said, “Martha loves animals SO MUCH. She really cares about them.” If I had said something like, “As long as they’re delicious, or lay eggs the right shade of blue,” there would have been an honest-to-goodness throwdown of peach and coral shirts in the top row. I am just saying: Do NOT mess with Martha, even if you’re just kidding around and you know she loves animals.
Swag we all got: the June 2010 issue of Everyday Food (delicious! easy! full of recipes for the weekly veggie box I start getting on June 1 and am terrified of! Why don’t I subscribe to this?); a copy of The Bucolic Plague, the story of a pair of Manhattanites who become gentlemen goat farmers and the stars of the new reality show, “The Fabulous Beekman Boys” (charming! goaty!); and a voucher for 8 pounds of Martha-approved dog food. (Where else would you get free dog food?) Also a tasting of delicious goat cheese from the aforesaid Beekman Boys.
Anyway, it was a hoot and a half. Classic 1950s television, without irony. And while I have previously admired Martha in a nervous way, now I can say that I actually like her. (The show I saw airs on May 26, the last show of the fifth season. That’s me in the top row, in the coral top. Next to the lady in the coral top. Next to the lady in the peach top.)
Meanwhile, The Knitting
It took me three weeks to knit Volt, give or take a few tears of impotent rage. It then took me 3 weeks to put the i-cord on, and if I could have procrastinated another 3 weeks before Kitchenering 4 measly stitches of i-cord together, I know that I would have. I would do a few rounds, be struck with a clear vision of the futility of human existence, and find something else to knit on. Or simply fall into a deep, restorative sleep. The only way I finally finished it was by hauling it around and making it my only subway knitting. It is not easy to apply i-cord to a humungous wad of shawl while traveling on public transportation, but if it’s the only knitting available, I will do it. I will do it and like it. But it was all very stop n’ starty. I finally finished it last night because the weather has been chilly and I can actually wear it. 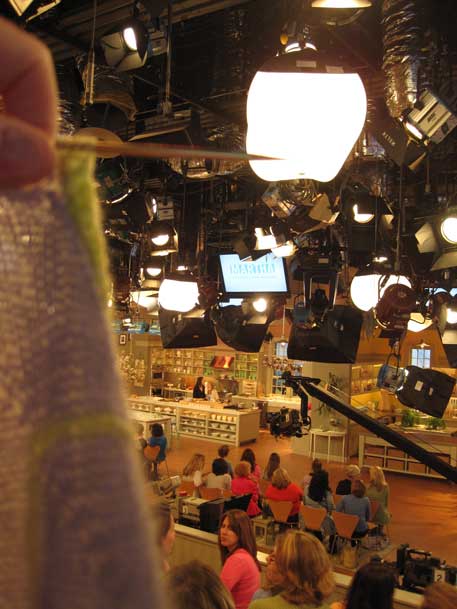 (Getting in a few rounds of i-cord while waiting for Martha.)
All you expert, no-nonsense Kitchenaires: respect. I find it fiddly and tangly and Quite Unpleasant and I’m no good at it and furthermore I do not wish to be good at it, so there. “As if to knit and take it off, as if to purl and leave it on”—SHUT UP! I HATE YOU! (As Craig Ferguson says, I look forward to your letters.) 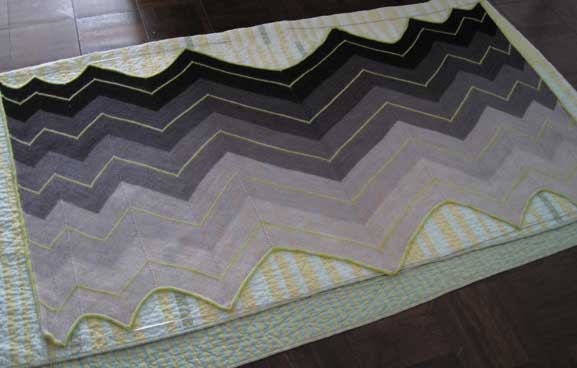 Lookie–I put it on the blocking wires last night at midnight, and when I awoke this morning it was fresh as a daisy and free of terrier depradations. You have to get up pretty early in the morning to beat Olive to a swath of cashmere on the floor. 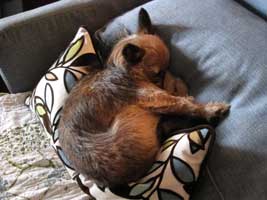 Well, not actually that early, if Olive has found a sweet unauthorized cushion arrangement.
Volt is a lovely thing. I am grateful to Grace Anna Farrow for this genre-busting pattern. And on a Mother’s Day excursion to Purl Soho, I restocked my cashmere, to make another design from The Fine Line, Dawn. Shawls for the un-shawlish. Slanty puzzles to knit.
More photos when the sun comes out and I lose 10 pounds. OK, maybe only one of those things is going to happen.
Love,
Kay