I was an early adopter of the Fruity Knitting podcast. It’s old school. It’s hard core. It’s a treat to see a knitter of Andrea’s skill level working on video and sharing her insights and challenges. And it’s got moments of laughter, too.  It’s a good talk show that happens to be about knitting.

Episode 18 is calling to me right now, perhaps because our Field Guide No. 2 has me in a Fair Isle state of mind. I can’t remember what my first Fair Isle project was, but I remember very clearly that it was not worked in the round; on the wrong side, I had to work the Fair Isle chart in purl. O, the humanity!

At the time, I was too inexperienced to know that working Fair Isle flat (back and forth) is considered a hard way to go. But, very often, flat Fair Isle is the Rowan way, since Rowan sweaters typically are constructed of pieces that are knit flat and then sewn together. In that pre-Ravelry, pre-knitting-blog age, I just did what I was told by the knitting pattern, and it actually worked out.

(Ann, I will let our readers picture you at this moment in a soundproof room, pounding on the glass and screaming NO NO HELL NO to my cheerful spouting of Flat Fair Isle propaganda. I know, I know. Flat Fair Isle is an abomination. I will never try to persuade you otherwise. I am just expressing my own wacked-out opinion that it’s not the worst thing in the world.)

This is edge-of-your-seat knitting. As the Fruity Knitting podcasts accumulate, I’m ever more grateful for all the work, knitting and knowledge that goes into making them. Thank you, Andrea and Andrew!

Just for fun, the knitting content—tutorials, show & tells and chat—in Episode 18 is interspersed periodically with excerpts from an episode of The Adventures of Ozzie & Harriet that involves two knitters, two boyfriend sweaters, and one boyfriend. This is cinéma verité: who wouldn’t knit Ricky Nelson a sweater?

Enjoy Episode 18, and poking around the Fruity Knitting backlist for lots of other gems.

People are getting ready for our Fair Isle Knitalong over in the Lounge. Needles up on February 1! 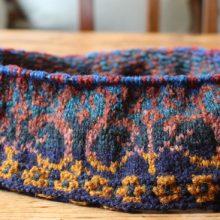 Letters
Another Smidge of Starmore 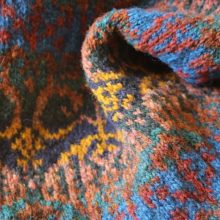