Dear Kay,
Among the Things They Think You Want To See is the large category known as monuments.

I don’t mind a monument. But the density of monuments in Russia is really, really something. In the basement of the Estonian Museum of the Occupations, they have a bunch of leftover Lenins gleefully removed from every street corner in 1991 when Estonia became independent. In St. Petersburg, our poor guide could barely finish describing Catherine the Great’s statue before we ran into another monument made from the leftover columns of some memorial cathedral. Monuments made of monuments! 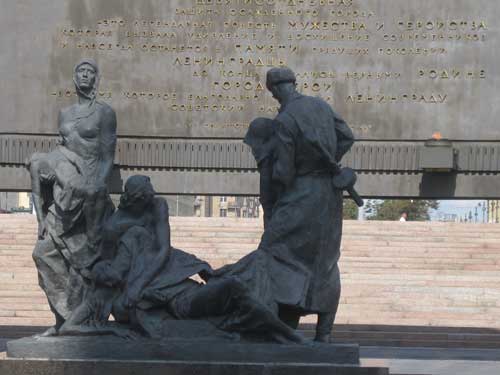 This was the one that stays with me. In this middle of a busy highway roundabout, there’s a brutal-looking ’70s-era memorial to the siege of Leningrad during World War II. You descend underground, past rows of lights, 900 of them to mark each day of the siege. The Nazis surrounded the city for two and a half years, but the Russians never gave up despite total starvation and the death of over a million civilians.If you read about the siege, you will be absolutely horrified.

You enter a vast chamber filled with heavy, solemn plaques and flags. The thing that got me was a short, silent film that ran in an alcove, on a loop, accompanied by Shostakovich’s Symphony No. 7, which he completed in St. Petersburg during the early days of the siege. It was documentary footage shot during the siege, blurred and grainy and nightmarish. I will never forget the flickering image of two bundled women sitting in the middle of the frozen Neva River, lowering a small cup into a hole in the ice. So slow, their movements. Such a struggle to pull the thin rope out of the hole.

Our guide told us that her family members who survived it never talk about the details of the siege. Some things really are unspeakable, she said.

In a lighter place, I was amused to see this one, to the great Russian poet Pushkin, whose use of everyday language in his poetry made him beloved by the people: 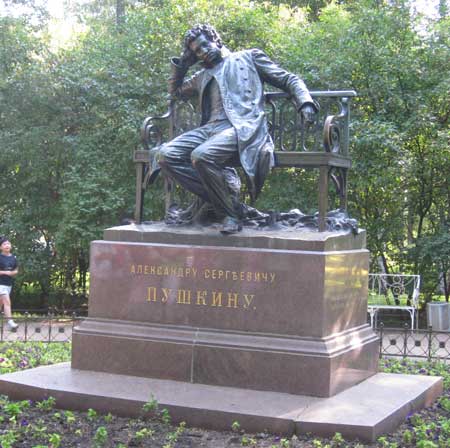 He looks like he used to be standing heroically but frankly just needed to take a break.

The Official Shoe of BalticCrawl ’09

I told you I was going to endorse a product, and here you go: 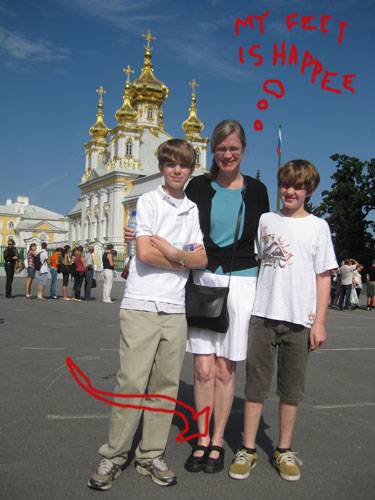 Shortly before we left on this trip, my sister Buffy and I went shoe shopping, and she VEHEMENTLY opposed my purchase of the Tsubo Koti, even at half price. I think she was reacting to the immense size of a size 10 shoe, being a measly size 7 herself. But I also think she thought they were “really bad.” Or “not good.” Or “godawful.” I bought them anyway, wore them all over the place, and I never ever wever had a moment’s grief. Way to go, Tsubo! Don’t send me any of your kookie high-wedge platforms, but feel free to send me some more of these things, because I love those bubbly soles!

And at Day’s End 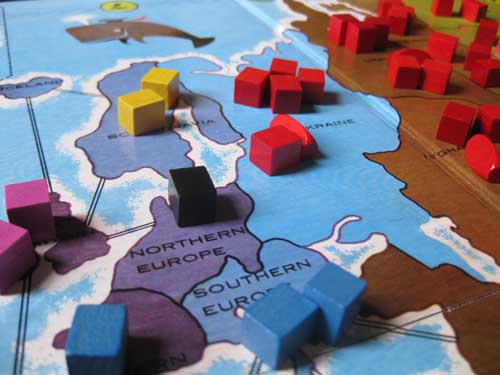 David had become addicted to Risk at camp–when he wasn’t licking doorknobs and contracting the flu. So we set up a game on the tiny table in the boys’ cabin and started invading each other.

Singing didn’t help; appeasement was worse. With every roll of the dice, my beleaguered armies evaporated. I left the game in charge of Hubbo for a while; when I returned, to my HORROR, I was down to Argentina and Brazil. Merciless! I hear there’s a monument in Cabin 925 now, marking the spot where the Army of Ann capitulated and went to get a cookie.