Visby: Land of Many Contrasts 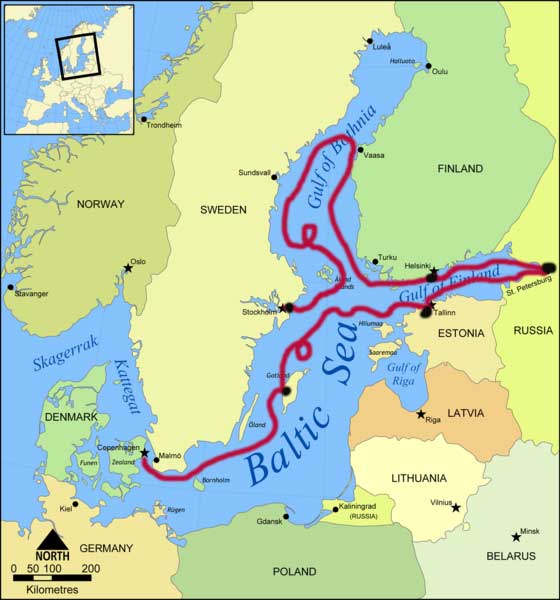 Until this trip, my knowledge of basic northern European geography was embarrassing. If anybody had asked me whether Denmark and Sweden are neighbors, I would have said, “Yeah, or Holland. Isn’t Holland in there?”

I’m including this handy Baltic Sea map to show you our itinerary, and also in case anybody else gets the jones for a sea-based yarn crawl. I’m telling you, it is impossible to travel this region without crossing paths with yarn, sheep, handknitters, and handknits. It is the Promised Land of the Knitterly Arts.

Shortly after leaving behind Copenhagen’s Middelgruden Offshore Wind Farm, I sat in our cabin, pondering the weirdness of it all: this eleven-story-tall ship, the ample selection of sequined party purses available in the gift shop downstairs, the fact that for the first time, our family was traveling with two boys in one room, their parents in another, with no connecting door. There was mutual glee at the idea of our all having separate rooms, but when the moment came where they were there, and we were here, I wondered what they were doing. Ordering room service, already? Eating all the fruit? Chucking fruit off the balcony? Chucking themselves off the balcony?

We missed casual bridge, bocce, team trivia, and a flower-arranging lecture before we even looked at the ship’s schedule of events. Good grief, this is exactly like Monteagle, I thought. We’ve gone 4,500 miles to end up at a senior day care center?

I heard a roar outside the balcony, and I went out to see whether they were launching lifeboats without having asked us if we wanted to go, too. The lifeboat drill had left me a little skeptical–no way could they fit 156 people into one lifeboat. The attractive Danish people would probably get first crack, and we Americans would have a rope off the side to cling to. And the ship–too big, this thing. Too much ship! It could sink halfway before we even noticed! We could be playing paddle tennis up on Deck 12, while a whole Kate Winslet/Leo DiCaprio scenario could be going on right under our feet. 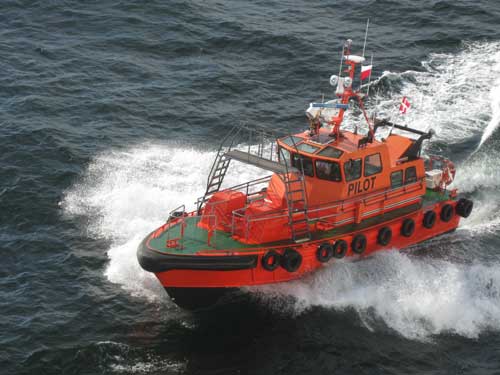 I watched in amazement as this boat roared up to the side of the ship, right there below me. It made me realize that the HMS Bigfoot was moving quite fast, even though the motion was barely detectable up on Deck 9.

Motion! I forgot about motion. Oh crap! I took a pre-emptive Bonine. Would I get seasick on this thing?

All of a sudden, as the boat nestled beside our ship, kicking up a big wake, a man in a dark business suit jumped onto the metal platform of the pilot boat from our ship: It was the the pilot from Copenhagen, leaving us now that we had entered unCopenhagenish waters. He straightened his coat, glanced up, and gave a big wave as he headed back to port. I wanted to tell him he did indeed look like James Bond.

The colors of that pilot boat made me sit down. And I kind of wished I was on such a fast low-rider.
Ship fact of the day: in the Baltic, our ship sat six feet lower in the water than it does in the ocean, due to the reduced salinity of the Baltic Sea. I thought, Isn’t six feet a lot? We’re in a ship built for the WRONG SEA? 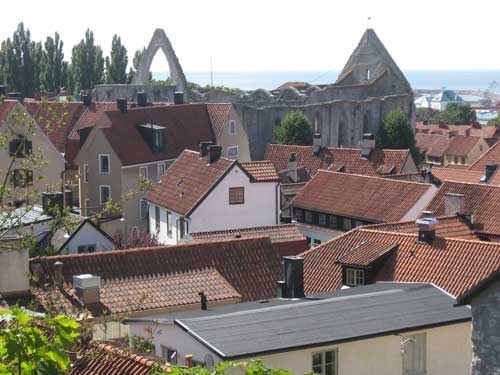 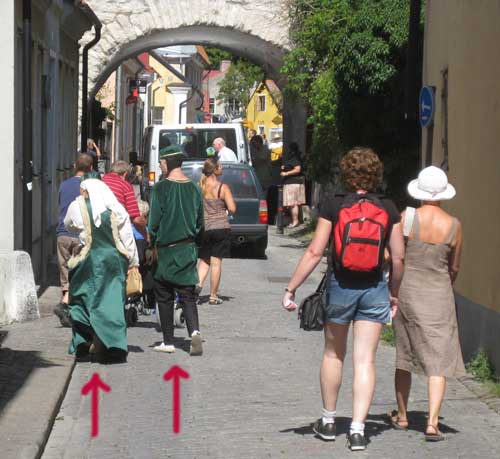 Visby is a little medieval town on the island of Gotland. Supercharming. It’s fun to read all about its history. It’s even more fun to wander its bumpy streets on a bright, cool day. 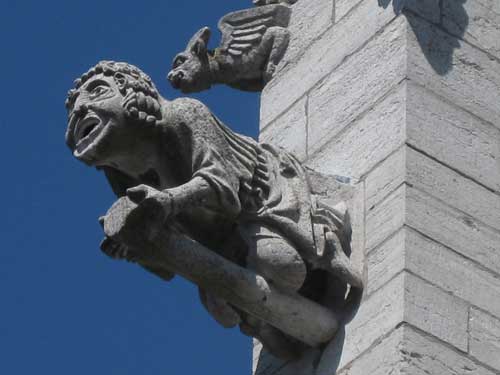 Here’s the thing: after being tangled up in knitting so intently in recent years, this summer has been a time for me to step back, to knit a lot less, to let life re-set just a little. It’s a very good thing, knitting, but it was time to stop thinking about it all the time, time to let it be a hobby. This meant that when I was planning this trip, I didn’t do what I might have done before–I didn’t make a list of every yarn shop in every port, and I brought only the most desultory sort of knitting projects. I was behaving like some sort of civilian! And I have to say, it felt good.

Of course, less than ten minutes into our day in Visby, I passed a window for a shop called Yllet–a clean, spare space inside an ancient, cobbled building. I had never heard of it, had no idea how to pronounce its name, but I loved it. It looked like Eileen Fisher, with beautiful linen blouses and simple pullovers. As I wandered the shop, my yarn detector went off: in a little room I found woolly yarn and linen and mohair, all labeled Yllet, all in colors that were natural and subtle and needed to come home with me to Nashville. 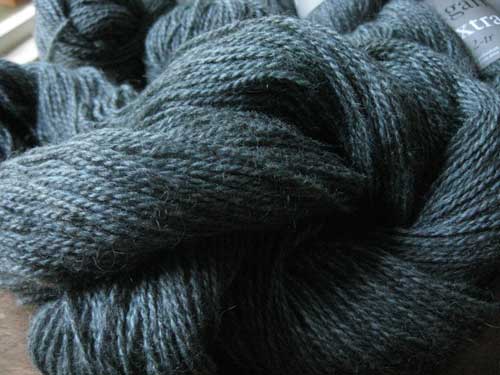 I talk a good game about balance, but a quick six skeins later, it was obvious that I couldn’t possibly resist such great yarn. I now know that the yarn is made from the wool of the native Gotland sheep, a “quiet, friendly, inquisitive sheep” according to Sheep! The Voice of the Independent Flockmaster. Yllet is a great company. And this quick interlude–discovering all this–made me eager to knit, all over again. 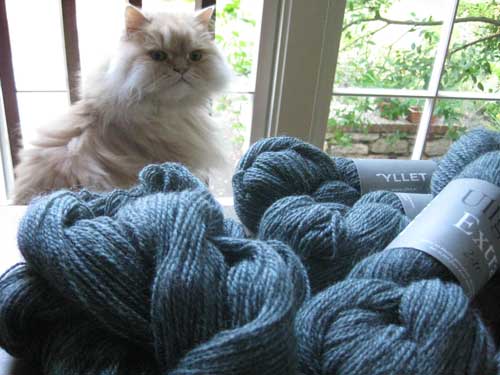