49 Comments
Home » Letters » A Bracket-Buster We Can All Love

A Bracket-Buster We Can All Love 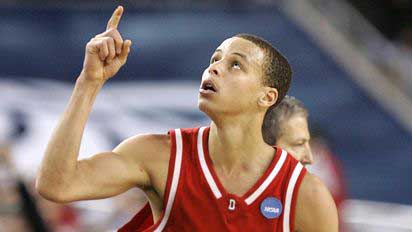 Dear Kay,
OK, I have to interrupt whatever I was thinking of posting (which likely had to do with the bordering of garter stitch rag rugs, sad to say) to point out that my small, dear alma mater Davidson College just whipped brawny, beefy Wisconsin to land in the Elite Eight of the NCAA basketball tournament.
WOOOOOOOOOOOOOOOOOOOOOOOOOOOOO HOOOOOOOOOOOOOOOOOOOOOO!
I have shoes older than Davidson’s star, the sophomore Stephen Curry, a slight, quicksilver-fast player who was overlooked by the big ACC schools. It’s one of those great stories. His elegant, floaty style makes him pure joy to watch. His mom and dad are always in the stands, and she always cries. I love that.
He outscored Wisconsin in the second half, all by himself: 22 to 20. He seems to require an insanely narrow sliver of room to make a three-pointer. He made one pretzely layup that left the crowd erupting in surprise, lifted as one from their seats as if some dynamite had exploded a few floors below.
One very cool turn of events in all this: the college’s trustees decided to send the entire student body to the game. With trustees’ own contributions, they rented buses and bought tickets and hotel rooms. So, in the huge arena, there was one section with a bunch of whacked-out Davidson students screaming their heads off. I wish I’d been there.
They play again Sunday night in Detroit. Sorely tempted to be there. Waiting for that email from the trustees about sending alumni to the game . . .
So, for all of you whose NCAA brackets are now officially busted beyond all repair, just spend a minute with Stephen Curry, and I think you’ll feel a little better.
What a guy. Who doesn’t love a Cinderella story?
Love,
Ann