Instinct Is a Good Designer (and So Is This Guy) 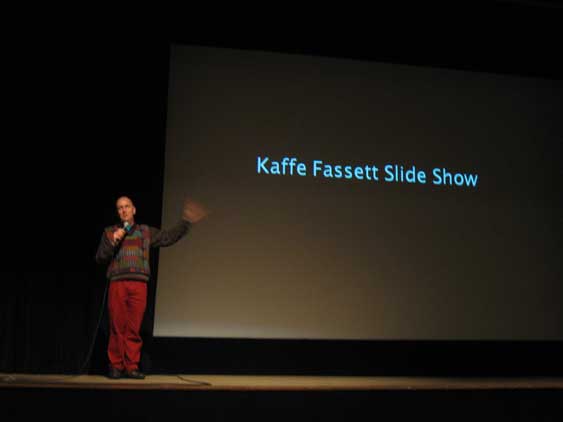 I went into Kaffe Fassett’s talk last night thinking that, being a SuperFan, I pretty much knew what there was to know about The Man and His Work. I came away surprised, and more than anything, inspired. My pictures, however, are anything but inspiring. The light was awful and I was too shy to flash. (Flashing would be impertinent, don’t you think?) 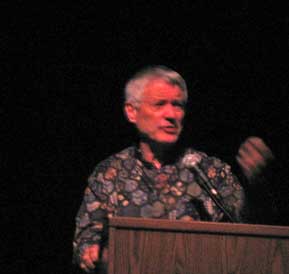 Surprises: He doesn’t have an English accent. He still sounds like a California boy, one who might have seen a lot of British movies. (When Kaffe “talks” to me in my head, he has an English accent. BBC-correct, and a bit bossy. He says things like, “Kay old thing, your pastels are simply not glowing.”)
He’s funny. It seems like more than a person could expect, that on top of all his other gifts, he’d be funny, but he is. He had me at “The color wheel is the work of the devil.” (He finds color combinations derived from the wheel to be sterile and boring. I repressed a big RIGHT ON BROTHER! HAIL YES!) 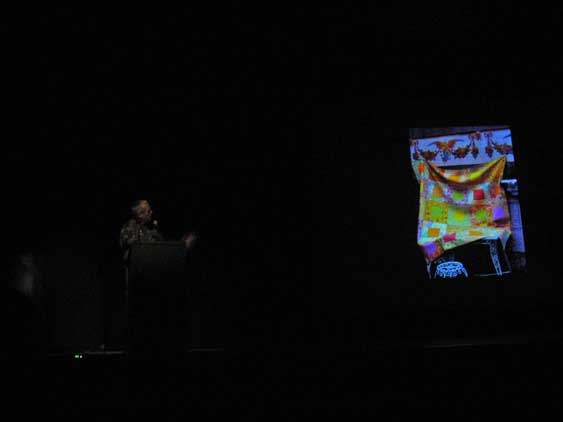 He’s still very excited about COLOR. I guess I thought that after all he’s done, he might be a bit “been-there-done-that-and-by-the-way-I-invented-color.” Not at all! He thinks people should work a few rows of his colorwork patterns, to imprint the structure on the brain, then throw away the chart and change colors at will. That’s how he does it himself, with a black & white chart or sketch, and a bag full of colors.

The thing I found most inspiring is his attitude toward the perfectionism that afflicts many of us when we knit or stitch. He is impatient with those whose work is slowed down by repeated ripping-back. Keep going! Git ‘r done! (OK he didn’t actually SAY “git ‘r done.”) You can’t really see the effect of your color and design choices at the row level, or the swatch level, or even the halfway-there level. You have to be willing to wait for the whole effect. If you work quickly, instinct starts to kick in, and “instinct is a good designer.” I’m going to remember that one for a long time. 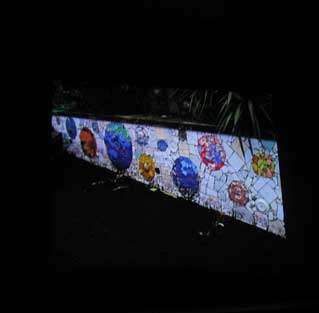 I didn’t know about his large mosaics. This one is a wall of broken china for a local preschool. He and Brandon Mably did another large one for a china factory, which custom-made pieces for them to smash up and glue back together. Could anything be more fun than smashing up new china and sticking it back together all crazy-like? (Sign me UP.) 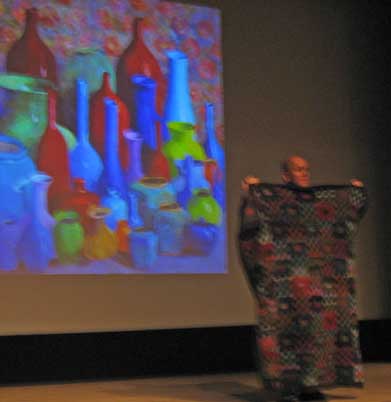 I also didn’t know about his commissioned big-stitch tapestries (one is behind Brandon Mably in the photo above, pretty much life-size), or his many crazy needlepoint chairs. MEMO TO THE PUBLISHING WORLD: Hello–where is the book about Kaffe’s house? I want that book! 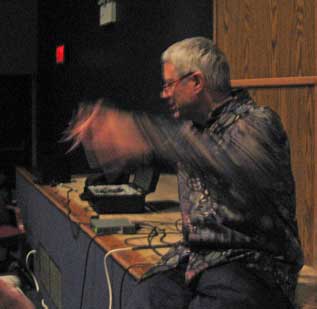 The evening ended with Kaffe signing his new book, Kaffe Knits Again (as Brandon said, he actually never stopped, but whatever), and being charming to everyone. I have marked him and Brandon down in my Book of Living Dolls.

PS I was too shy to ask for a picture, but here’s proof that my Smoulder cardi got to meet her dad. 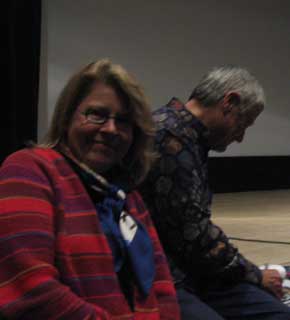